Anybody who’s been reading my reviews for MTV’s Scream knows that I consistently give this show a very hard time. Last week, we got a bunch of students locked inside a high school, pitting various students against one another. It was passable. The week before, it was a bunch of high school students drinking a drugged bottle of Tequila (with extra Anejo!) and barfing up their major organs all over Emma’s house (I’m still wondering how Emma managed to clean that all up before her Mom got home) before tripping balls and having Cinemax fever dreams that ultimately added up to nothing even remotely symbolic or meaningful. A couple weeks before that, we saw Emma’s long, lost Dad stalk her, nearly run over with his car — and then confessing that he’s her father. This show has been deserving of my scorn. But, this week…this week is just a touch different. This week, Scream manages to get most things right and also moves things along quite nicely despite suffering from the same frustrating, nonsensical plotting that sticks to this show like a deer tick.

It’s been a week since Noah opined that we had run past “Act One” and had gone into the second act where things began to pick up and move. I remarked that Noah’s words may have been prophetic in that all the chess pieces had been placed on the board and were about to begin their dance across a tumultuous (and bloody) chess board which, I hoped, was good news for all of us who have been patiently waiting for this series to show us what it’s been promising fans for weeks. And what a nice series of opening moves we saw…last week, Noah finally clued into the fact that his best friend Audrey wasn’t exactly acting normal or with the best intentions, what with having driven the entire friggin’ school into kicking the living bejeezus out ‘Stavo (The Magnificent! *Flamenco Guitar Hit*) over his bloody drawings of the Lakewood Five. Admittedly, this week’s action doesn’t begin well, throwing a cheesy Noah monologue at us. During the montage, various Lakewood Sixers are shown doing things like murdering their bed linens (Brooke) and kickboxing in their bedroom (Audrey — who not only suddenly knows how to kickbox, she also has a six-foot kickboxing bag to beat up) and Noah warns the audience that nothing’s normal when the ones you love are suspects. The final shot we see is Noah’s Board of Suspects…with Audrey dead-center as the main suspect. 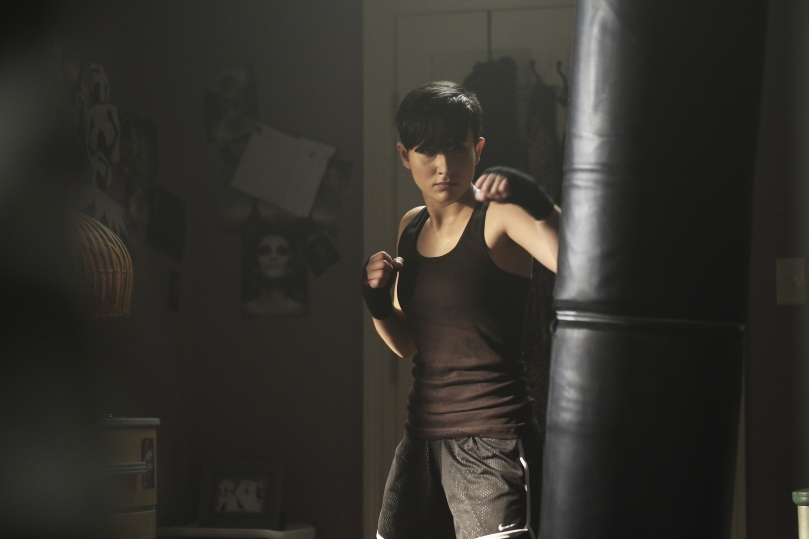 Emma’s not so convinced. In fact, that’s what she spends most of the episode telling other characters. A good one-third of everything she says is, “No, it’s not [name of suspect],” or “Please don’t do [name of action],” before lambasting them and telling them they better be smarter because she knows The Killer and this is “just one of their games!” And the entire time, you’re like, “You just got to this party, lady! Don’t try to tell us which beer we should drink!” It’s one of the most irritating things about this episode. Everything involving Emma is, which costs the episode a great deal. The showrunners have already spent an inordinate amount of time forsaking her by making her a boring supporting character only to try to mix her back in by force and the result is underwhelming.

Brooke’s tired of your shit and she isn’t taking it anymore. After getting off to a suspect start by stabbing her bed sheets, Brooke consults with ‘Stavo regarding Jake’s murder. She needs his help finding her ex-boyfriend’s killer because, since ‘Stavo is the son of the Sheriff, he has “access to the police archives.” Yes, please look after your suspension of disbelief. It’s probably gonna be murdered after the next few sentences. ‘Stavo manages to raid the archives and finds out that the Lakewood Police suspect a lot of people — including Seth Branson. But he didn’t do it, says ‘Stavo. He had an alibi. He was screwing the Lakewood High psychologist, Miss Lang…so, yeah. There’s a sudden love affair For the Convenience of the Plot.

“I shouldn’t get involved,” Brooke says with a hint of jealousy in her voice. 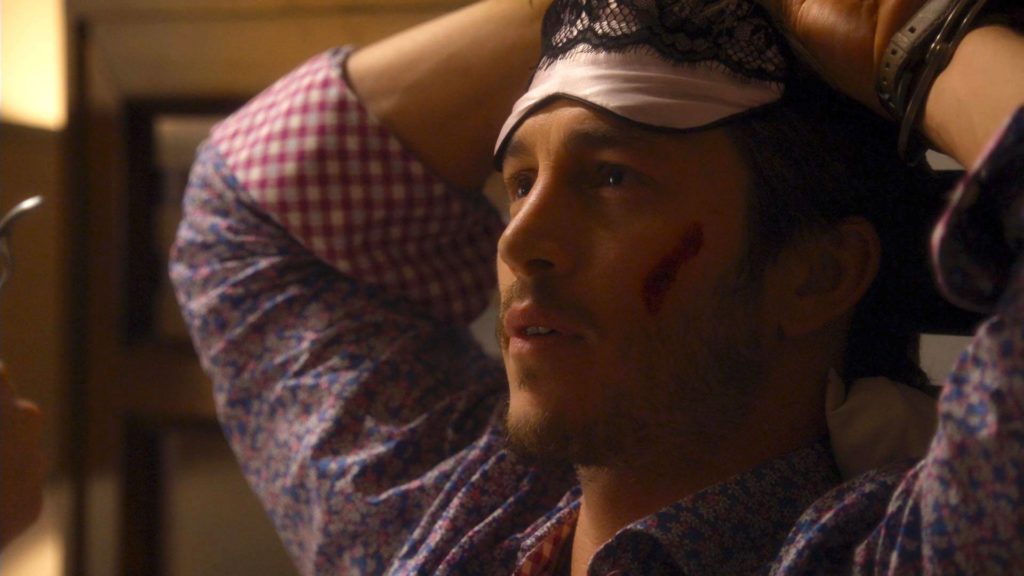 Armed with her newfound Girl Power, Brooke swings for the fences: first, she meets with Miss Lang under the pretense that she needs to talk about her grief and depression in the wake of Jake’s death. Of course, her “tearful confession” is carefully designed to push Miss Lang away from Seth Branson completely by admitting that she slept with her former teacher in a fit of desperation. The entire sequence is darkly humorous, with a lethal combination of crocodile tears and a Lakewood Theater marquee in the background, which advertises the famed then-taboo PG-Disney film, “Something Wicked This Way Comes”. Secondly, she meets with Branson, promising a sexual hook-up — but, instead, delivers a Catherine Trammel-inspired interrogation wherein she questions her former beau after tying him up and holding him at scissor-point. It’s nice to finally see a Brooke who isn’t a mindless drone and who truly kicks ass. Atta girl. It’s here we see Branson confess that Jake was paying Branson to keep him away from Brooke. “$10,000 dollars!” Seth says when Brooke presses him on how much she’s worth. Yes, you read that right: Jake was paying a guy his own girlfriend rejected $10,000 dollars to stay away from his girlfriend. Try not to question it. In fact, don’t even think about it. You’ll get a headache, believe me.

Meanwhile, Noah’s got his suspicions — but is all done with Audrey’s phone which he boosted last episode. So he does a reverse pick-pocket move after tailing her in a painfully forced sequence involving a bicycle Noah “really likes.” Nobody believes this. Not Audrey, not the audience, not anyone. And, ultimately, it doesn’t matter anyway. When Audrey finds her phone in her backpack again, she’s immediately ready to pounce and immediately suspects that Noah had her phone the entire time. Her problem, however, is the same as Noah’s: uncertainty in her target. This leads us to the heart of the episode: Noah being tricked by “The Killer” into meeting the long-dead “Eddie Krueger” at the nearby “fairgrounds”. At night. All alone. “He moonlights there as a security guard,” Noah explains to Emma. Really? Last time we saw Eddie, he was dead and stuffed into the Lakewood Motel bathroom tub. In fact, he’s still there. Does the show bother to explain how Eddie has managed to remain “missing” all this time? Doesn’t the place have any other management taking care of the rooms? Was Eddie the only employee there? Are the hotel clients running the place now? I mean, how has nobody managed to find out that there’s a room with a dead guy in it? 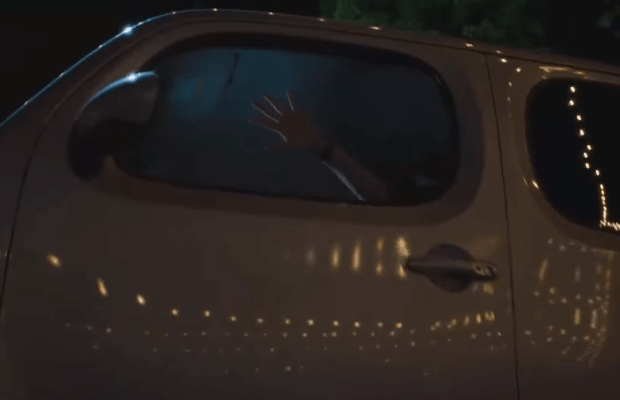 In any case, Noah stupidly goes to the fairgrounds alone and ends up abducted by The Killer because who didn’t see that coming? Anybody? Am I alone here? It’s even weirder when you consider that Noah’s an encyclopedia of knowledge when it comes to horror movie tropes and points them out like film nerd Tourettes. So why does he lose his filmic superpowers when he needs to wander into a dark, creepy property with nobody around? Noah ends up paying a very dear price, getting kidnapped by The Killer and placed into an attraction ride car. But, wait! He’s not alone — Audrey’s with him, having also been kidnapped. There goes the “Audrey is the Killer” theory, right? Not quite. After Noah begins to come to terms with the fact that these may be his final moments, he goes into a seemingly-silly and lighthearted confessional about hating his cat, wishing he could have learned to play an instrument and lying to the late Riley about his favorite film. “My favorite movie is actually Psycho, but you can’t exactly tell a woman that on the first date,” he says, attempting to find humor in the situation. Audrey rides out Noah’s guilt-ridden rant — until Noah brings up the time he and Audrey kissed, much to Audrey’s chagrin. Noah’s pain is evident in every word he pushes across to her and he can only nod as Audrey tells Noah that she does love him — but not “that way”. It’s not what Noah wanted to hear but it’s what was needed to be heard. It’s also the most honest and heartfelt the series has ever been and may seem to be more than what this series deserves…but it’s refreshing to see and also serves to move these two past the awkward state they were in and back together where they belong.

The only problem is that it’s anti-climatic and more nonsensical: Audrey is the one who kidnapped Noah and she confesses this to him while begging Noah not to tell Emma (who’s right outside) about anything that’s happened. Also, Emma has attracted the killer like a fly to shit — but nothing comes of it except that there’s a brief game of hide-and-seek between the two — and then Keiran suddenly shows up so MTV’s teen audience can all think he’s probably the killer, too. But thanks for the confessional. That was nice. The episode does end incredibly: first, we get Audrey opening up to Noah that she was the one who invited Piper to Lakewood — but not because she wanted to start a murder spree. She wanted to shoot a documentary about Brandon James. She says she feels guilty for what Piper became and asks Noah to hide everything he found on her phone from Emma…and the camera cleverly slides to the left so we can see that Noah’s been recording the entire conversation. Very good. Would have LOVED it if we heard Noah agreeing and seeing his voice recorded as well, but I take what I can get. The other half deals with Seth Branson being discovered by the killer. The scene is incredibly gruesome, even for somebody as deserving as Branson might be. But it works because the pain looks so palpable: the Killer takes their time doing what they do to him and, by the time it’s all over, your jaw is on the floor, something the series has failed to induce in its audience. It also legitimately adds Miss Lang to the suspect list because it’s not a murder. What happens to Branson feels like the wrath of a woman scorned and that opens up some interesting doors concerning Emma and her mental state and what role Lang plays in that regard.

I really liked this episode. While I’m not holding my breath for a positive future for this series, “Jeepers Creepers” proves that the show has potential to be good — or at least finish strong.