It goes without saying that because I’m ranking the best moments of season six of Game of Thrones that there will be spoilers.

Game of Thrones’ sixth season has probably been its most exciting season to date. Of course, that’s what we say at the end of every Game of Thrones season. We’re so fickle during the season but once it ends we cannot help but sing from the rooftops about how much we love this ridiculous show. It’s been over a week since the Game of Thrones season ended and I’m still suffering through withdrawal. I’ve only watched the finale about a dozen times so to sate my obsession, I decided the best course of action was a top 10 list compiling my favorite moments from the season. You may notice that some big scenes are missing and that’s because this is an entirely biased list and while explosions and battles are awesome, I relish the smaller moments.

This scene will prove to be more important in future episodes than it really is right now. Sure, it’s nice for viewers to know the truth about Jon Snow’s parents, but it’s simply setting up for the mind fuck that is going to be Jon learning the truth about his family. I’m sure it will also come into play when the North learns that Jon isn’t the bastard son of Ned Stark, but instead the son of a Targaryen.

Look, everyone hated Dorne last season and for Game of Thrones to start off the season with Doran Martell and his son both biting the big snake, well, I was worried we’d have to suffer through more of the ridiculous Sand Snakes plots. Thankfully, they only appeared in the first and last episodes, so that is cause for celebration.

To improve their plot they’ve teamed up with the always insulting Olenna Tyrell who then both support Dany’s Journey to the West-eros, which makes them infinitely more interesting in my book. It doesn’t excuse last season’s behavior, but their (thankfully) few minutes of screen time were used wisely.

I’ve mentioned several times throughout the season that Game of Thrones tends to be a bit sparse on the whole “hope” thing, so when Brienne arrived to save Sansa and Theon, I nearly peed my pants. Brienne is a knight who has been trying her entire life to prove she is loyal, honorable, and trustworthy, and the narrative has spit in her face every step of the way. As fans, we see her as so much more than the rest of Westeros who view her as the failed Kingsguard who may or may not have had a hand in killing Renly Baratheon. This moment gave us this group of broken youngsters, Sansa, Theon, Brienne, and Podrick, and we watched them form a group that was a little less broken than before they met.

7. Cersei sits on the Iron Throne 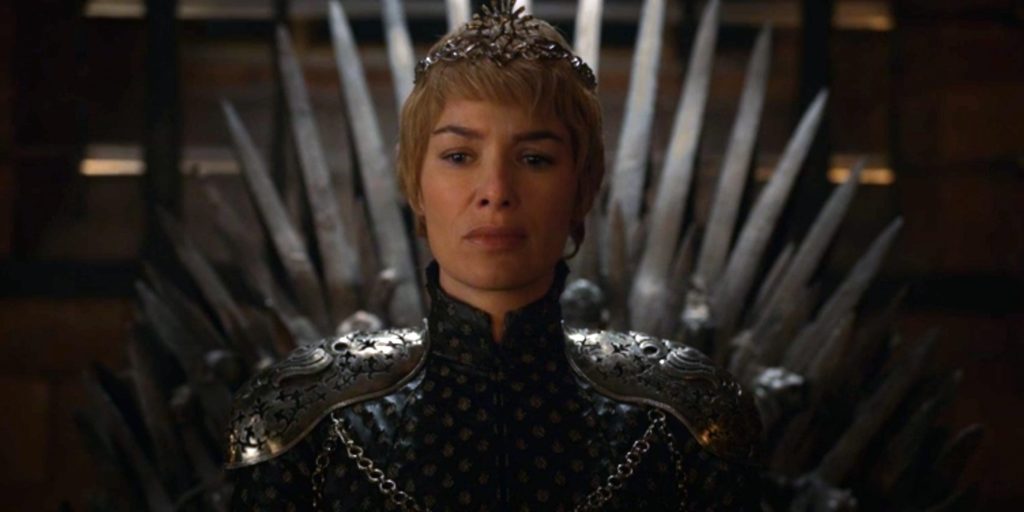 Raise your hand if you have ever been personally victimized by Cersei Lannister?

I’ve already professed my immense love for the opening scene of the finale, the slow demise of the Tyrell house and the High Sparrow, and how amazing my boo Cersei is the entire time. I’ve mentioned before that she’s a broken woman, and as terrifying and exciting as that journey has been, it’s even more exhilarating to watch her sit on the Iron Throne with absolutely nothing left to lose.

I was certain, CERTAIN, that Jon and Sansa would somehow miss one another and would be like the rest of the Starks, circling one another but never actually meeting. Then they did meet and my heart exploded into a thousand happy shards. For most of my Game of Thrones obsession, I hated Jon. He was whiny and frustrating and too much like a Stark that I found every plot dull. However, sometime just before Hardhome, as the new Lord Commander, he became infinitely more interesting to me. Then the prospect of him reuniting with Sansa appeared and I couldn’t control my affections. More than anyone else on the show, I want Sansa to be happy. She’s had the worst go of things so if being with Jon (AS HER BROTHER YOU PERVS) makes her happy, well, I’m going to relish in that moment as well. LOOK AT THOSE BABIES. YOU LOOK AT THEM.

It would be easy to just include every scene from the final two episodes in this list and call it a day, but that would be doing the season, the build-up to those great moments, a disservice. While Arya has had the most suspect of arcs this season, her interactions with Lady Crane were integral for her character, forcing her to deal with her past and the reality that Cersei, behind all that hatred and paranoia, is just a woman who lost her son. It’s this notion that sparks a change in Arya, that compels her to see beyond black and white (Heh HEH) and recognize that her Faceless Man training is just a distraction from her real mission as Arya fucking Stark of House Winterfell.

I can’t include the actual scene because it’s too heart-breaking. Please enjoy this 8-bit recreation instead. Friends mentioning “hold the door” still elicits an “awwww” out of me and that’s saying something considering I’ve hardened my heart to inevitable loss on Game of Thrones. Looking back, of course Hodor’s background seems so obvious but in the moment, watching it play out for the first time, it was DEVASTATING realizing that this gentle giant lived for one purpose his entire life. Not to mention that in this scene we lost the Three-Eyed Raven, all of the Children of the Forest, and SUMMER, who Bran has neglected to even MOURN, the heartless bastard. Hodor deserved better.

At the end of season five, Jon was DEAD dead. Every person involved with Game of Thrones was adamant on that point. Of course, as the obsessive fans that we are, we saw through that shit within the first 15 seconds. Ned Stark and the Red Wedding were anomalies, not true indicator’s of the story at large. Jon’s resurrection wasn’t so much an “if” as a “when.” That being said, the way in which it was done was masterful. Tying back to Thoros’ resurrection of Beric Dondarrion was important. Losing hope was integral to the success of Melisandre’s magic. And just when everything looked as dire as possible, Jon returned to us.

“The Battle of the Bastards“, upon second, third, and fourth viewings, is still a thing of beauty. The battle itself was gruesome and gritty but the reward was more than satisfying. For once in the Game of Thrones universe good triumphed over evil. It was ugly and it was rough-going at times, but this is what we need to stay invested in a show as depressing as Thrones. At some point the darkness becomes too much and when the villain always wins, why even bother? “Battle of the Bastards” gave us that hope again, especially when the Stark banners flew over Winterfell once more.

I debated this entry for a long time and while the “Battle of the Bastards” and Jon’s revival were both incredibly important moments in the show, I have been waiting for Dany to leave Essos for far too long for it to not be my number one moment. There’s something so exhilarating about watching a fleet of ships with the Targaryen sigil sail west. And to have Tyrion, Varys, and the Greyjoy kids at her side only makes me more excited for the moment when she lands. (Presumably in Dorne.) I’ve already talked at length how much I love Dany and how I think she’s a great leader (made better by her relationship with Tyrion), so I won’t go into my affections here, but damn, how can you not cheer for her to succeed?

Agree or disagree with my assessment? Argue with me in the comments!

Game of Thrones will be back for seasons seven and eight, with around 15 episodes left to air. 🙁