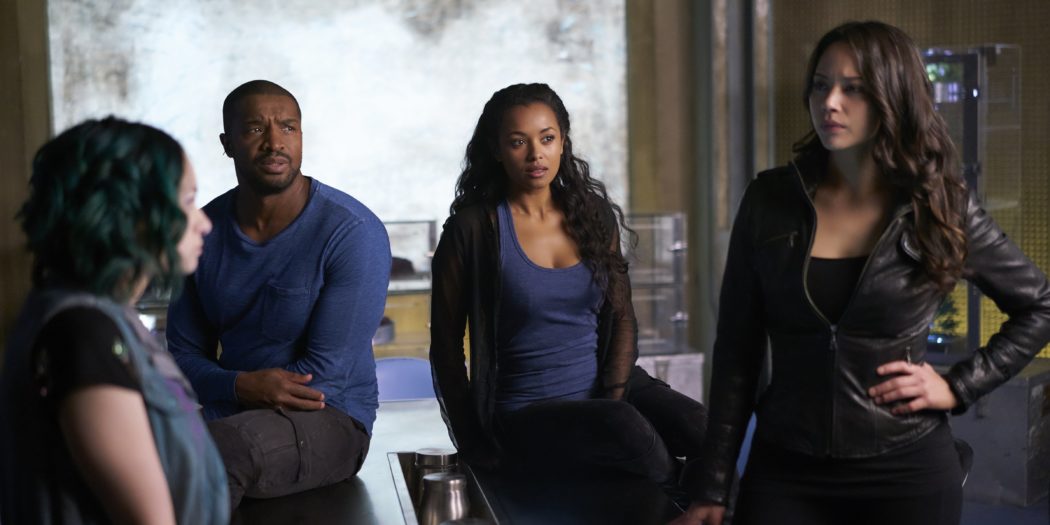 ‘Dark Matter’ Season Two Finale: “But First, We Save the Galaxy”

This week on the season finale of Dark Matter: the crew tries to stop an attack against a corporate summit, Five gets a blonde wig, Four goes full Ryo.

Spoilers through Dark Matter season 2, episode 13: “But First, We Save The Galaxy.”

I can’t believe we’ve gone through an entire season of Dark Matter already. It feels like just yesterday our numbered pals were making friends in a Galactic Authority prison. Now they’re all grown up and trying to save the galaxy from a corporate war.

It looks like all my fears about last episode’s ending were for naught as Ryo just let the crew of the Raza without a word. I’m not surprised he killed the Seers, the Empress, and even Hiro, but I am surprised there wasn’t a stand off. Sometimes I am unsure about the passage of time in Dark Matter, especially with every episode ending on a cliffhanger, but it does make for quick and to-the-point storytelling.

“But First, We Save The Galaxy” starts off with Commander Truffault discussing an upcoming corporate summit on Eos 7. There hasn’t been a summit for over ten years because the corporations don’t trust one another, so most of the corps are preparing for some kind of deceit. And failing. Truffault and the Mikkei Combine think it’s best to maintain a position of neutrality but Ferrous Corp, as we learn later, definitely wants a war.

The Raza crew shows up and slams down some future knowledge and Truffault surprisingly listens. I’ll be honest, I don’t trust her, especially with her shady looks she’s always giving, and I don’t think Two does either. Truffault only wants to stay in the Raza’s good graces because of the hope that one day they might get their hands on that blink drive technology. Mikkei agrees to help the Raza get on board Eos 7 so they can play at big damn heroes and stop the bomb from destroying the station.

As much as I adore Five, let’s be real: she’s not going undercover again any time soon. Everyone is worried about what might happen to her on the station, especially Six, who has taken up his role as Five’s protector once again.

Five: “If there’s even a chance that we could stop a war from happening, we have to try.
Six: “I guess you’re right.”
Five: “Of course I am. As usual.”

An aside: I’m kind of sad Six didn’t get more screen time this season. I think he’s paid his dues. 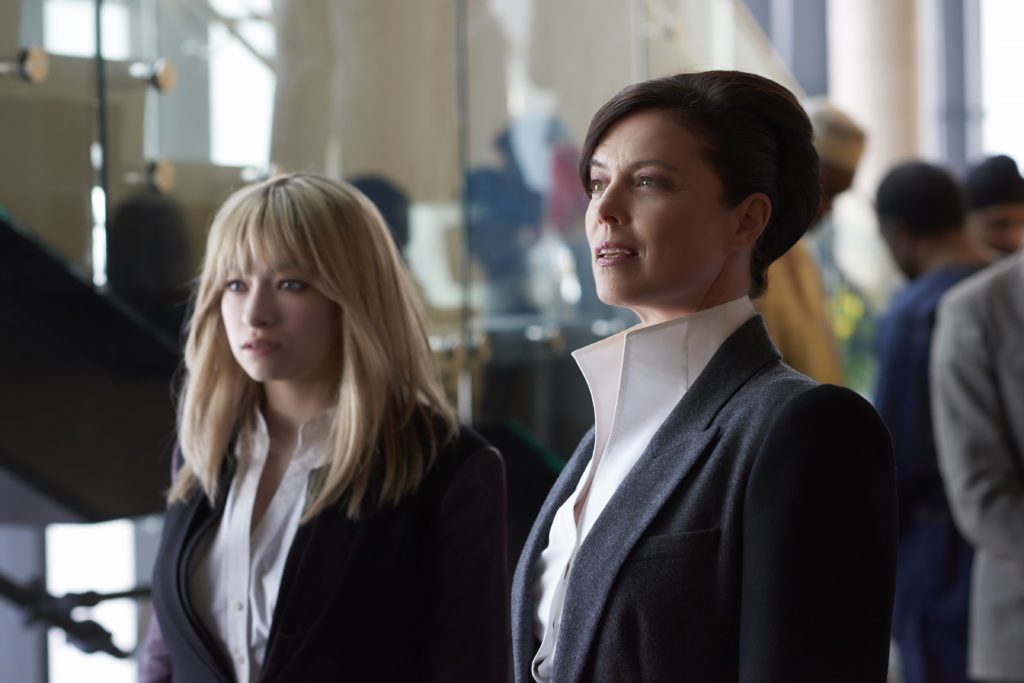 Five dons a suit and a blonde wig, and then she does anything but fit in on Eos 7. When Truffault and Nieman (commander from Ferrous Corp) go off alone acting 50 Shades of Devious, Five meets Nieman’s assistant. He’s also acting shady but Five is too preoccupied with Ryo’s arrival for The League of Autonomous Worlds to notice. When she is attacked by Ryo’s guards, her new pretty-eyed friend saves her, only to reveal he’s an android with a chip upgrade. DUN DUN DUNNNNNN.

Five, being better with computers than espionage, tells the android that his secret is safe with her. And then his guilt programming goes into overdrive, forcing him to tell Five the truth: he’s the bomb. Not like 1990’s vernacular “da bomb” but like, “everyone on this station is about to go kerplooie.” Five’s kindness inspired him and even though he can’t stop the bomb, he can keep it from killing everyone on board, so he throws himself out an airlock and explodes.

For a station that was under lock and key, they didn’t think to guard an airlock that could act as an entrance on and off the ship? What the heck?

Before the journey to Eos 7, Ryo calls Nyx and essentially proposes over the phone. Ryo, sweetie, I know you’ve been suffering from amnesia for a while, but that’s not how you appeal to a girl like Nyx. Spar with her, have an intense make-out session, apologize for all the dumb shit you’ve done lately like be responsible for the deaths of both of your brothers. Then you can pop the “Will you be my Bae?” question. OF COURSE Misaki overhears this conversation and is sent into a jealous rage. I chime in with a, “Haven’t you people ever heard of closing the goddamn door?!”

Ryo has a moment later on when Two sneaks in his room and confronts him about what he’s doing at the summit. He admits freely he wants the drive and Two is all, NO. IT’S MINE. He just smiles and it’s clear he plans on getting the drive one way or another. 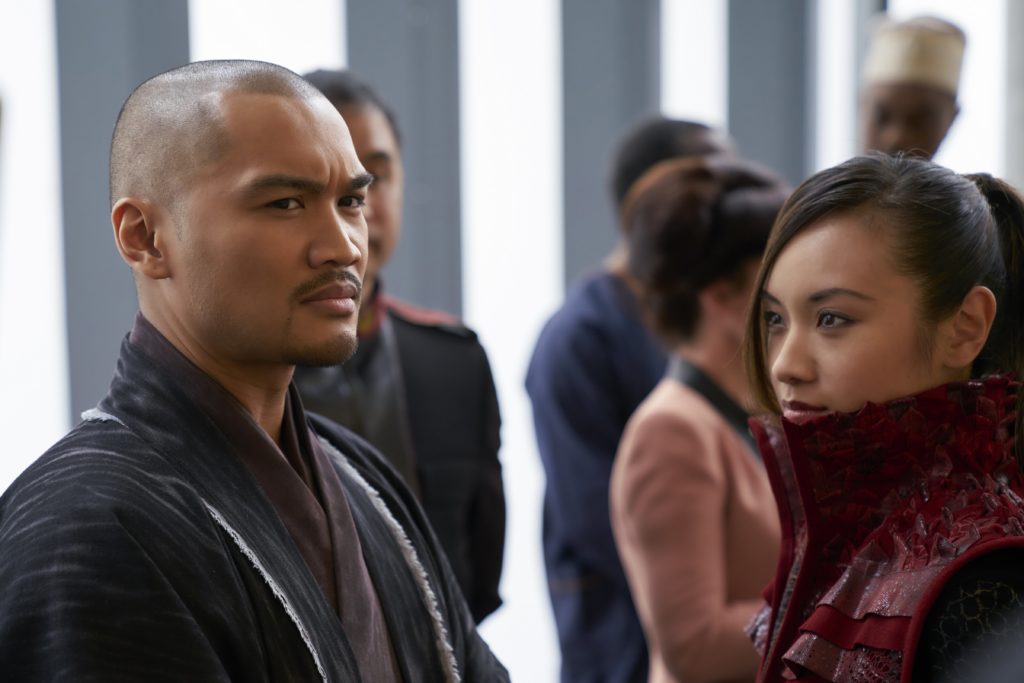 It’s at this moment that I wonder why Six didn’t tell anyone about Ryo’s ambition for having a fleet of blink drive capable ships to save Zairon. If Six had mentioned it, maybe once they realized Ryo was on the station, precautions could have been put into place to prevent the theft of their most valuable item. Granted, by the end of the episode, we don’t know if he took the REAL drive or not, but I’m guessing by the Android’s tone and Two’s surprise, that he did.

Nyx and Misaki face off during the blink drive heist and Nyx puts the hurting on Misaki. It’s only when Misaki is like, “Oh btw, my cut poisoned you like five minutes ago” that Nyx falls down in agony muttering, “With a kiss, I die.” The Android finds Nyx later on, but from the look on her face, it doesn’t seem like things are going well for our Seer friend.

I wonder how Ryo will handle it when he learns that his old girlfriend murdered his new girlfriend after he specifically told her not to hurt anyone. I’m also intrigued by Ryo’s logical sense of honor. He kills his own blood without batting an eyelash but he doesn’t seem like he’d ever intentionally hurt the crew of the Raza. He doesn’t hurt the Android and even turns her back online to warn the crew to get off the station because there’s about to be an earth-shattering kaboom.

Other Smaller Things That Happened

Three looked dapper as hell in his corporate garb and my crush on him grows ever stronger. However, he did get his face smashed in by some of the Ferrous Corp goons so his day could be better. As he’s coming to he sees…was that Lt. Anders, ex-friend of Six when he was Kal Varrick?? Oh buddy.

Also ever-growing is my affection toward the Three/Five friendship. Three sneaks up on Five and she puts the hurting on him. Their ensuing exchange is beautiful.

Kierken was especially annoying this episode, not listening to anything the crew of the Raza told him. After his exchange with Three two episodes ago, I had hoped he would be more open-minded about our friends, but it seems Three escaping only made him resolute in his goal to stop them. He does heed Two’s advice, however, when he goes to where Ryo’s bomb might be and inadvertently sets it off sooner. So there’s that.

The Android is still coming to grips with her humanity and she had a really great line tonight:

“I suppose I never realized that emotions could have such a downside.”

How the hell are you going to leave me with a cliffhanger ending like that, Dark Matter?!

Like most of the episodes of late, “But First, We Save The Galaxy” was action-packed right from the first scene. It was definitely an exciting note to end the season, but I’m left with so many more questions than answers. I’m just glad Dark Matter has already been confirmed for a third season.

I still maintain I wish that the whole corporate war shindig had been explored more. I know the main three, but have no idea about anyone else at the summit. Not even just that, but I’m not sure about what separates the three from each other. They have to have specialities, right? I just want to know more!

Nyx had better survive to next season or I riot. I need more from her character. Actually, I need her and Two to hook up. For science.

Dark Matter returns next summer for season three. Those teases.

Don't let the fancy nerd duds deceive you; Jen’s never been described as “classy.” You can find her on Twitter where she stalks all of her favorite celebrities: @jenstayrook. Or you can find her on Steam or Xbox dying in every game she plays as "Rilna." Email: jen.stayrook@theworkprint.com
@jenstayrook
Previous Season 23 of “Dancing With the Stars” Premieres with More Mirror-Ball Madness
Next ‘Passengers’ Official Trailer: ‘Titanic’ In Space!

In this week’s episode of Syfy’s The Magicians, the team splits up to locate The …