‘Dark Matter’: Betrayal in “Sometimes in Life You Don’t Get to Choose”

This week on Dark Matter: the Android drinks hot chocolate, Four goes back to Zairon, Five is a hero, the infamous betrayal finally rears its ugly head.

Spoilers through Dark Matter episode 212, “Sometimes in Life You Don’t Get to Choose.”

In the second episode of Dark Matter’s double-header, “Sometimes in Live You Don’t Get to Choose”, we’re rocketed back to the reality of war. “Wish I’d Spaced You When I Had The Chance“, while serious and emotional, felt like an interlude to the real story season two has been trying to tell and now that Four has definitely uploaded the neural link, we’re heading into the final chapters of this arc.

The actual plot of the episode isn’t as interesting as all the character development happening. Most of it plays out as expected, minus the last few scenes, which are, so to speak, killer. The episode starts off with Four, now Ryo, using the Raza’s blink drive to attack a Zairon cruiser. He orders the cruisers commanders to surrender to his might and support his claim to the throne of Zairon. Two of the three commanders agree, so he’s got pretty good odds so far.

Ryo and the Raza use a similar trick to get the attentions of Emperor Hiro, proving just how powerful the blink drive really is. Once reunited, it only takes a matter of moments for Hiro to trust Ryo and it all seems so easy. The brothers establish a plan to have Ryo take over his rightful position as Emperor of Zairon, but it’s obvious that the Empress won’t go down without a fight. After her confrontation with Hiro, she plots to ensnare Ryo and hold him accountable for a murder he didn’t commit.

The Empress somehow learns of Hiro and Ryo’s plan to address the people and instead she has Hiro hidden away while she makes a false statement about an assassination attempt, pinning the blame on Ryo. Everyone, including all the viewers, tell Ryo that she’s setting a trap for him, but he plans to go away. Two tries to talk him out of it, telling him he is so blinded by his memories that he is unable to see the truth.

Ryo only responds, “My former memories hold the key to my success,” and he leaves the ship to walk right into a trap set by the Empress.

The Painful Truth of Memories

It seems as though there aren’t any side effects to Ryo’s neural upload. Both sets of memories are still in tact, even though the Android cautioned he could lose his “new” memories. However, not everyone is okay with Ryo going ahead with the upload. Nyx is particularly upset, especially given their new romantic involvement. Last episode they appeared more at ease with one another and while I wouldn’t say I get the impression they’re in love (actually it almost seems like we’re missing an episode when it comes to their relationship), there are emotions brewing, so for him to do this behind her back is a betrayal. As Ryo gently touches her cheek, he says that his feelings haven’t changed. To which she responds, “Maybe not. But you have.”

It’s something we see echoed later on in Ryo’s treatment of Misaki. He’s blindsided to learn that her trust in him wasn’t because he had earned it but because she loved him. With him abandoning her, her loyalty is now to the throne and Ryo doesn’t sit on it. Like Nyx, Misaki can see how much Ryo has changed over the years and it’s clear she doesn’t much care for his new self. 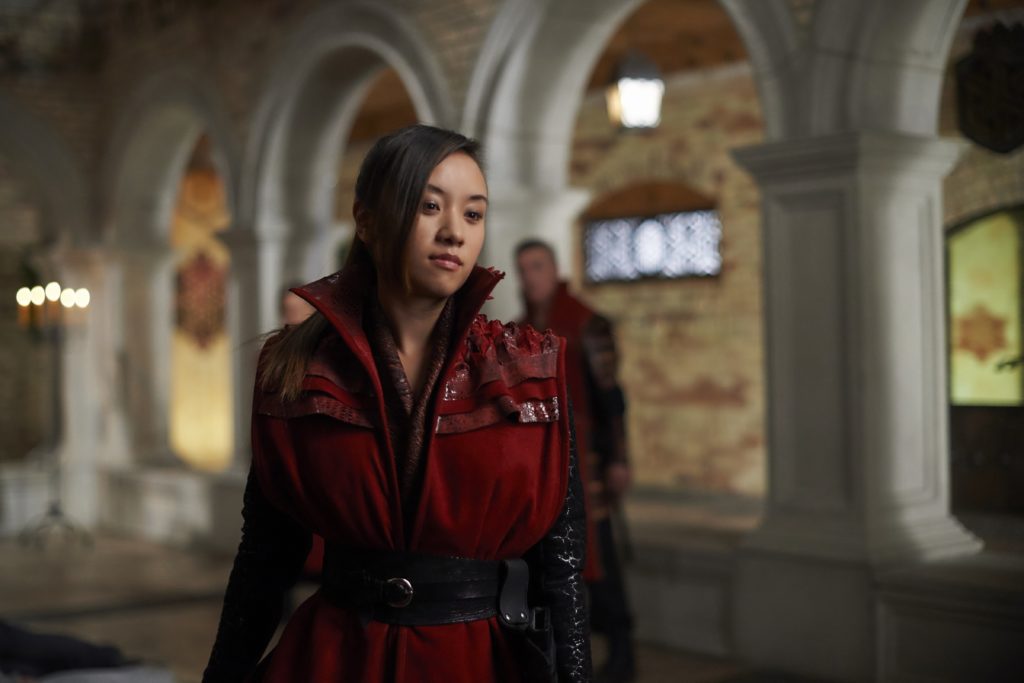 Also dealing with Ryo’s transformation are Three and Five, in their own ways. Three notices that Ryo has been keeping his distance, which for a man of his stature only means one thing: Ryo knows about something awful that Three did in his past and he’s shielding him from it by not making contact.

Five and Six have a heart to heart down in the cargo bay about Ryo. Of all the crew members, it’s Five who saw up close and personal just how dangerous Portia Lin, Marcus Boone, and Ishida Ryo really were before the mind wipe. She remembers how easily Ryo would have killed her, without guilt, without hesitation, so naturally she’s afraid that there’s a part of him who might revert back to being that monster. Six tells her that before the mind wipe, he knew that the GA used him to kill ten thousand innocent people and still the old Six went back to work for them, so maybe they all weren’t the best people. Only the mind wipe (and the presence of Five), changed him and the others on board the Raza. Ryo may have his old memories, but “new” Ryo is in there, too, and that’s a person worth trusting.

The Android’s Ongoing Journey of Self-Discovery

Two happens upon the Android as she’s drinking hot chocolate under the guise of “sampling” for the sake of the crew. WE SEE RIGHT THROUGH YOU, ANDROID. It’s clear that the Android is plagued by helping out Four, but Two, very maturely, states that they’re his memories and it was ultimately his decision to make. The Android, ever afraid she’ll make another mistake and put her crew in harm’s way, desperately seeks Two’s approval while trying to navigate new and frightening emotions. Two reaffirms that when dealing with humans, it’s much more difficult to know “what is right” than it is with dealing with ship’s systems.

Pleased that she made the same decision that Two would have made, the Android lets slip this small, genuine smile, and you really start to see that bond form between them. The Android LOVES Two, but she also values her opinion and more than anyone else, she listens to Two’s word. That bond we saw between Portia Lin and the Android on the AU is really coming to fruition in their reality. And this bond is so much more than just “we both have nanites.”

This bond is brought even more to the front of mind when we learn from Ryo that it was Portia (with the help of Five) who installed the Android’s emotive subroutine. And personally, I think this exchange between the two is incredibly important for later episodes:

Ryo: “It was the act of making you whole that brought the two of them together. Changed a lot of things on this ship. For the better.”
Android: “Why did they do it?”
Ryo: “The answer lies within you.”
Android: “That’s very poetic and ultimately unhelpful.”
Ryo: “No, I mean literally within you. You possess internal recorders that documented your time on this ship before we went into stasis.”
Android: “I was rebooted.”
Ryo: “Which wiped your immediate access to the digital data, but not the data itself. It still exists somewhere inside you. You just have to find it.”
Android: “Why are you telling me this?”
Ryo: “Because I may not get another chance…..and because I’ve always liked you, Android.”

While I don’t think any of these revelations will come to fruition in the season finale, I do think it’s important enough to stow away for Dark Matter season three.

The Rescue and the Betrayal

Ryo finds himself in a pickle in the capital of Zairon, but have no fear! The crew of the Raza is here! Determined to save their friend from his death sentence, they break into the building using Five’s knowledge of the palace. She goes off to rescue Emperor Hiro while the rest of the crew is caught in a trap set by the Seers.

Empress: “Is this all of them?”
Seer: “The entire crew. Except the girl. But she’s of little consequence.”

OH HO HO. LITTLE DO YOU KNOW, YOU FOOL.

They’re all dragged into the throne room where Ryo is to be executed, but the Android arrives in the Raza just over the palace and threatens them with a few bombs. The Empress calls the Android’s bluff and orders Ryo to be killed anyway.

Upstairs, Five shows up to find Hiro who is doing his homework in his room, completely oblivious to the mayhem downstairs, and she’s all, “Yay! I’m a hero!” 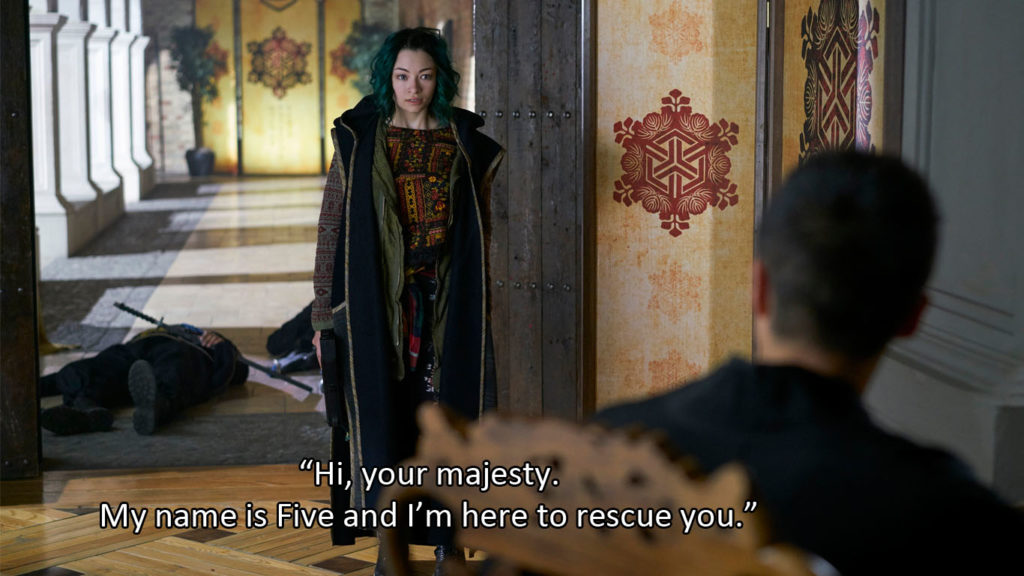 Hiro storms into the throne room all, “Mom, I can’t believe you did this! You’re the worst!” He orders her to be arrested for the murder of his father. Then Ryo steps up to the throne and in one fell swoop has the Empress, Hiro, and all of the Seers killed. He is now the unchallenged ruler of Zairon and the crew of the Raza are at his mercy.

As for the crew of the Raza, they have something Ryo wants: the blink drive. Judging from his conversation with Six earlier in the episode, he seems like he’ll do what is necessary to get it so he can win the war and save his people.

Nyx learning the truth about Milo broke my heart. I thought for sure she felt him take his own life after it happened, but I’ve since realized that isn’t the case, so when she learned that not only he was dead but that Four was partially responsible, it was too much to bear. She could kind of understand the distance caused when he became Ishida Ryo, but to know that Four, the man she cared about, was behind it hurt even more.

Soooooo Devon is really gone, huh? Unceremoniously tossed the way of One? I’m not all that torn up, but it still stings.

On the flip side, I can also now see Six destroying the blink drive (as an act of betrayal against the crew) so that Ryo doesn’t get his hands on it. You know, for the good of the universe.