This week on Dark Matter: the crew goes outside, Four smiles, the Galactic Authority returns, and Three and Five bond during a kidnapping.

Spoilers through Dark Matter episode 211, “Wish I’d Spaced You When I Had The Chance.”

Finally, the Raza gets a chance for some R&R off ship in “Wish I’d Spaced You When I Had the Chance.” I’ve had some qualms about Dark Matter in the past, lamenting the fact that they spend a lot of time on the ship and not exploring, what I imagine to be, really fascinating planets all over the universe. That being said, episode eleven is a breath of fresh air, making excellent use of the different character pairings. It’s so good, in fact, that it is unequivocally my favorite episode of Dark Matter.

A Pit Stop and Sour Fruit

The crew makes a stop for supplies at a space station to pick up the usual goods as well as some personal effects. Four buys cleaning supplies for his swords because, “There’s nothing more disrespectful than killing an opponent with a dirty blade.” And Two, well…

Two, Four, and Nyx then partake in a few games of chance while they wait for Three and Five to finish up their own shopping spree and sour fruit pranks. The crew each share light-hearted moments and THIS is exactly what I’ve been craving from Dark Matter. I don’t need an entire episode of “Punk’d by Five” but it certainly helps alleviate some of the darkness of the last few episodes to have the crew be silly with one another. However, is it just me or is it a little concerning to watch Four smile? I almost don’t trust this joking Four as he second guesses which color Nyx hid under a bowl.

The Return of GA Inspector Kierken

Things don’t stay happy-go-lucky for long as someone inevitably recognizes the crew of the infamous Raza. Why they don’t take more precautions is beyond me. How many times now have they been recognized at a space station? How many has a group like the Galactic Authority or the Seers learned of their whereabouts? I’m sure the blink drive gives them some measure of security out in space, but on a planet, they can’t just flash away.

GA Inspector Kierken hears of the Raza crew and he can’t let go of the past. He has a duty to the people of the galaxy and dammit, he’s going to make good on that duty. The GA stymies communication on the planet during a silent lockdown but the action tips off both Two and the Android back on the Raza. Two, Four, and Nyx make use of GA outfits lying around near their transfer transit and seriously? No one was standing guard? The disguise lasts all of ten seconds before Two has to slash her way out of trouble and back up to the Marauder.

By far the BEST part of this episode was every interaction between Three and Five. We already know about my love affair with the green-haired girl and recent posts certainly show off a burgeoning adoration for the scruffy dude with the big gun and even bigger heart. When Five is kidnapped at the station, Three wastes no time going to rescue her. 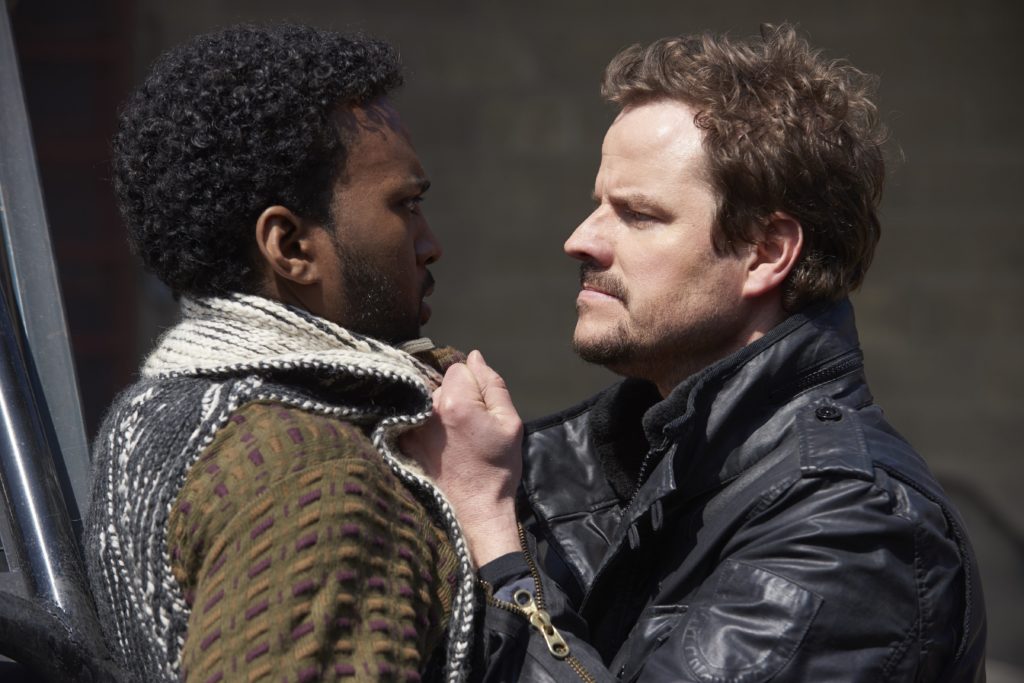 Five does her best to protect herself, even stabbing one of her assailants in the ear with a spoon (YEA!) and pulling off some very Two-esque fighting moves (HELL YEA!), but ultimately she’s outnumbered and gets maced into slumber again. Three manages to take down one of the Danker brothers, steals his shotgun, and then bursts through the cabin doors with a bad attitude like he’s starring in a remake of Boondock Saints. That’s HIS kid, dammit.

The pair’s reprieve doesn’t last long when the last Danker brother returns home and shoots Three in the chest as the screen fades to black. And my heart stops.

Six, still on board the Raza with the Android because he’s not quite trusted, wants to go to the station to help out the rest of the crew. He offers to use the Transfer Transit so it’s only his clone out there and not the real him, but the Android is skeptical. She looks positively evil as she says she won’t hesitate to kill should her faith in him waver.

Android: “I believe you’re sincere in your desire to make amends. And that you harbor no ill intent toward the crew.”
Six: “Thanks.”
Android: “Of course, my assumptions are sometimes fallible so I’ve identified a weakness in your left ventricular free wall that I will target if my faith in you proves to be misplaced.”

Damn, Android. That’s harsh. I didn’t know you had that kind of darkness inside you.

When Two returns she decides to go back down to the planet to rescue Three and Five and she invites Six along to pilot the Marauder. Aw. She does trust him. (As she should. He knows what he did.)

The GA and Kierken show up at the cabin and our intrepid best friends duo barely escapes. Three is suffering from a bad gun shot wound that Five accidentally got drunk with alcohol, so their escape isn’t a fast one. Five tricks him into taking a rest because she knows he’s lying about his injury, but Three is stubborn and refuses to put Five in danger. The sweetness between these two is so strong I got four cavities just watching this episode.

They continue their trek through the woods but Three starts to realize the severity of their situation and tries to Harry and the Hendersons Five with a “I NEVER LIKED YOU” bit in order to get her away from him. It, of course, fails because Five isn’t, you know, a kid, and she knows this is as close as Three gets to “I love you.” However, she does leave to go cause general chaos and mayhem because let’s be honest, that’s what Five does best.

Three’s interrogation by Kierken was an important scene, not just because it proved how loyal Three is to the crew of the Raza, but because it gave some indication about the impending doom that is the corporate war. GA Inspector Kierken tells Three that Mikkei is set to take the fall for the white hole bomb that destroyed an entire planet, which would lead the universe into a war it couldn’t handle.

In all honesty, I truly believe Kierken is a man who wants the best for the common people. He doesn’t trust the crew of the Raza because well, they’re criminals, but he does seem to offer, what he thinks, is a genuinely good deal every time they interact. His mission is to divine the truth from them so that he might better protect innocent civilians from what would be a disastrous three-headed massacre. It’s admirable and if he were after any other crew I might cheer for his success. Even Three seems to recognize the importance of his mission, which is why, I think, he lets Kierken’s clone live with the knowledge that he (along with Wexler, Tash, Vons, and Cain) was responsible for unknowingly delivering a bomb at the behest of Commander Truffaut.

Later, Six watches a news segment about riots in the outer colonies and discusses with Two the incoming change. Bad things are happening whether they like it or not and they have to pick a side. According to Six, it can be good or evil. Those are the only two options.

I’ll be honest, I wasn’t entirely sure Three would make it off the planet alive. Dark Matter was tugging at my heart strings all episode and I was CERTAIN his interaction with Five would be his last. Thank goodness I was wrong because I love the two of them together. I love the bickering; I love the snarkiness; I love the nicknames; and I especially love the smile Five gave Three after he destroyed Kierken’s drone.

Five visits Three in the infirmary and I wanted so desperately for her to hug him, but that isn’t their relationship. Their relationship is made up of stolen bullets, scoffed thank yous, and sour fruit mashed into oatmeal. I wish that I was more eloquent about how wonderful it is to have a relationship like theirs but the only thing I can do is jump up and down, screaming about how they melt my heart. Three and Five (and really the whole crew) are proof that you can have a show and be completely invested in relationships that aren’t based around romance. Not every story needs to be a love story.

AND THEN FOUR GOES TO ANDROID TO UPLOAD THE NEURAL LINK, RUINING EVERYTHING.