Johnny and Britni arrive at the Redemption house and immediately go to caress Cara Maria’s face. 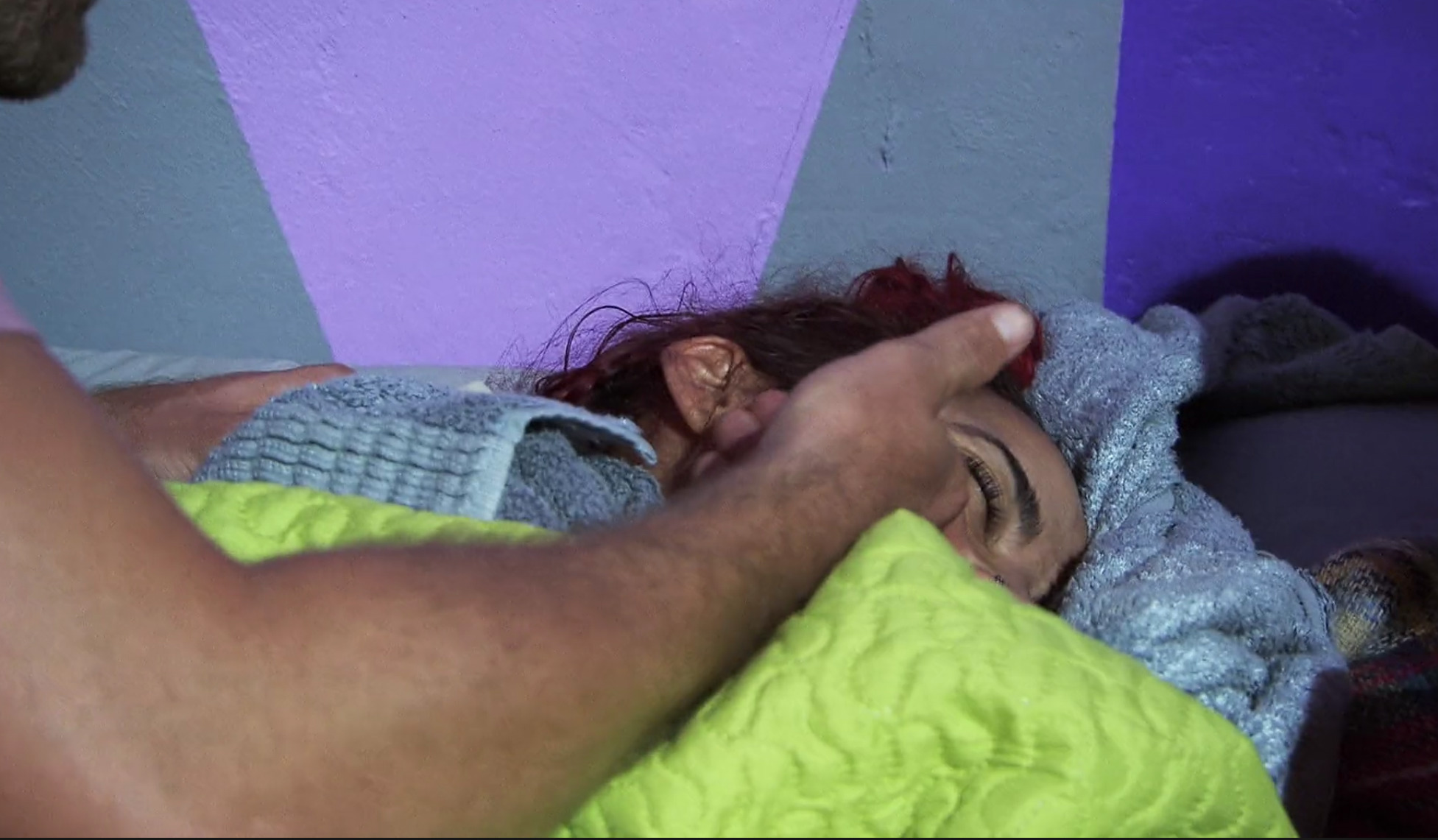 Well, that was creepy. Most people are surprised to see Johnny, but not Jemmye:

Please, Jemmye, never change. The house is dumbfounded at the number of champions and vets that are currently in the Redemption House. Johnny is also correct when he says that the Redemption house has more championships than the entire challenge house, but that is part of the game. It’s all good though because the Redemption House is like a mini Oasis where they can relax, drink, and watch some fireworks on the roof of their Cartagena Home. An Oasis that also used to have/may still have fleas, faulty AC, and toilets that didn’t work. 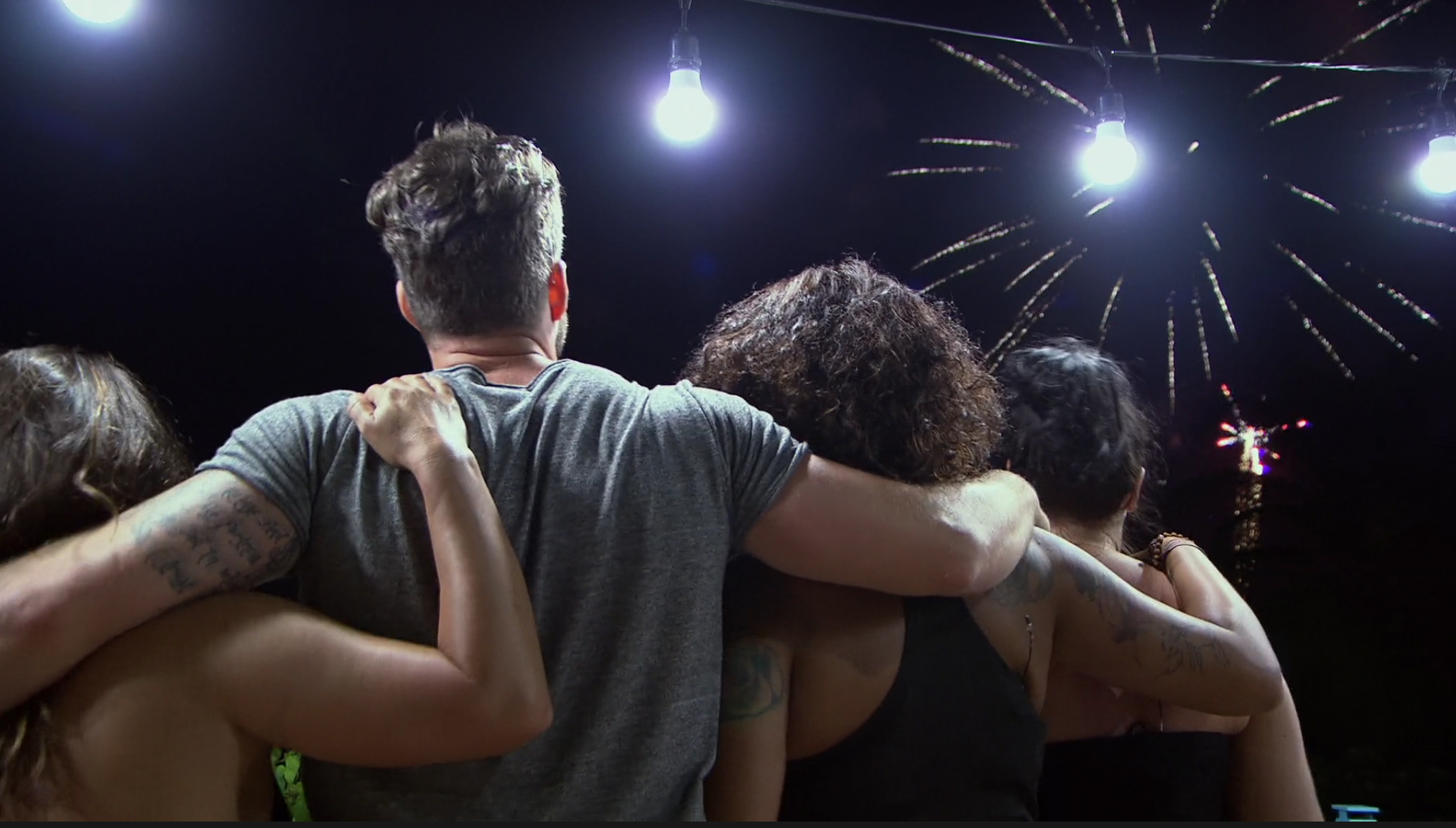 They can’t live in an Oasis forever though because a Redemption Challenge is a-knockin at their door.

I am pretty sure they didn’t name this Redemption Challenge, so I will name it for them “Whack-a-Dirty Mole.” That sounds like a name they would give it.

The game works like this: The Redeemers have to stick their heads through a hole and decipher a code from a wall of numbers hanging some distance away. Once deciphered, they must use that code to open a container with puzzle pieces and solve said puzzle. Doesn’t sound that hard, right? WRONG. While the Redeemers are trying to figure out the lock combination, the house competitors are hitting them over the head with “Whack-Sticks.”

On the girls’ side, Cara Maria is the first to figure out the combination and has a decent lead. Britni is the next to arrive at the puzzle and while Britni puts up a valiant effort Cara Maria solves her first and secures her spot in the house. While Jemmye was the third to get to her puzzle pieces, Veronica and Aneesa still had their heads sticking out of the hole when Cara won. 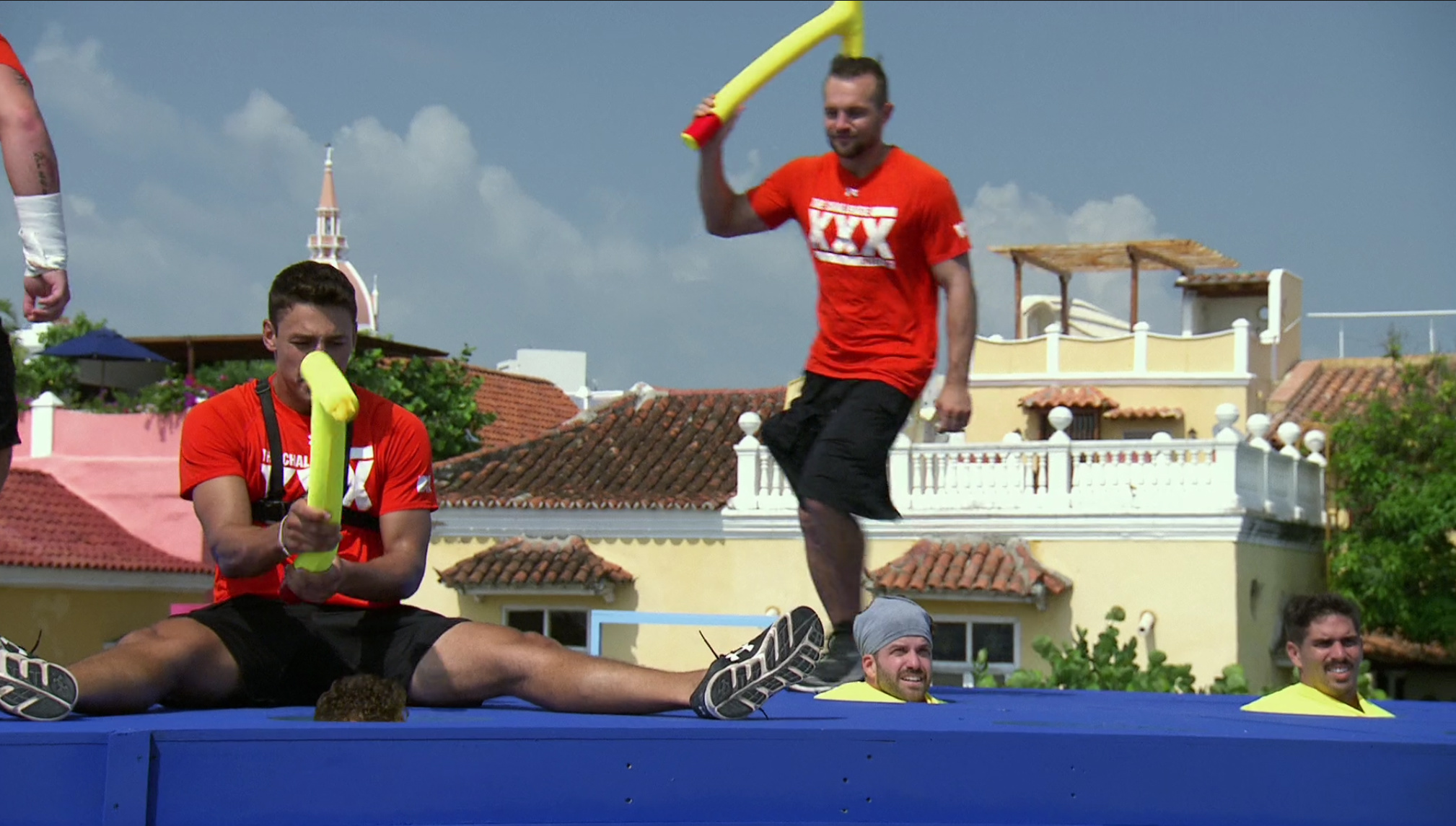 Thanks to Nelson, there are actually two openings for the boys, meaning that not one, but two guys will make it back into the competition. The two guys to secure these spots are CT and Jordan, meaning that Leroy, Dario, and Bananas will have to be sent home. Not gonna lie, I kept forgetting Dario was in this episode even though he was competing in the challenge. As for Johnny, I have mixed emotions about seeing him leave the competition. On the one hand, Johnny is so cocky that it is nice to see him be put in his place every now and then. On the other hand, he took responsibility for the loss instead of blaming everyone under the sun, and that is also nice to see. Maybe he is maturing? Probably not, but a girl can dream.

After the redemption challenge, production allowed the cast member to go out and enjoy a nice Italian dinner in Cartagena, Colombia. Interesting cuisine choice, but I’ll let that slide. The table is both physically and emotionally divided by the different cliques. By that I mean Jailah et al are trying to enjoy their night out while Cara Maria and Camila glare at them while whispering to each other about how “they MADE those girls.” Ugh. 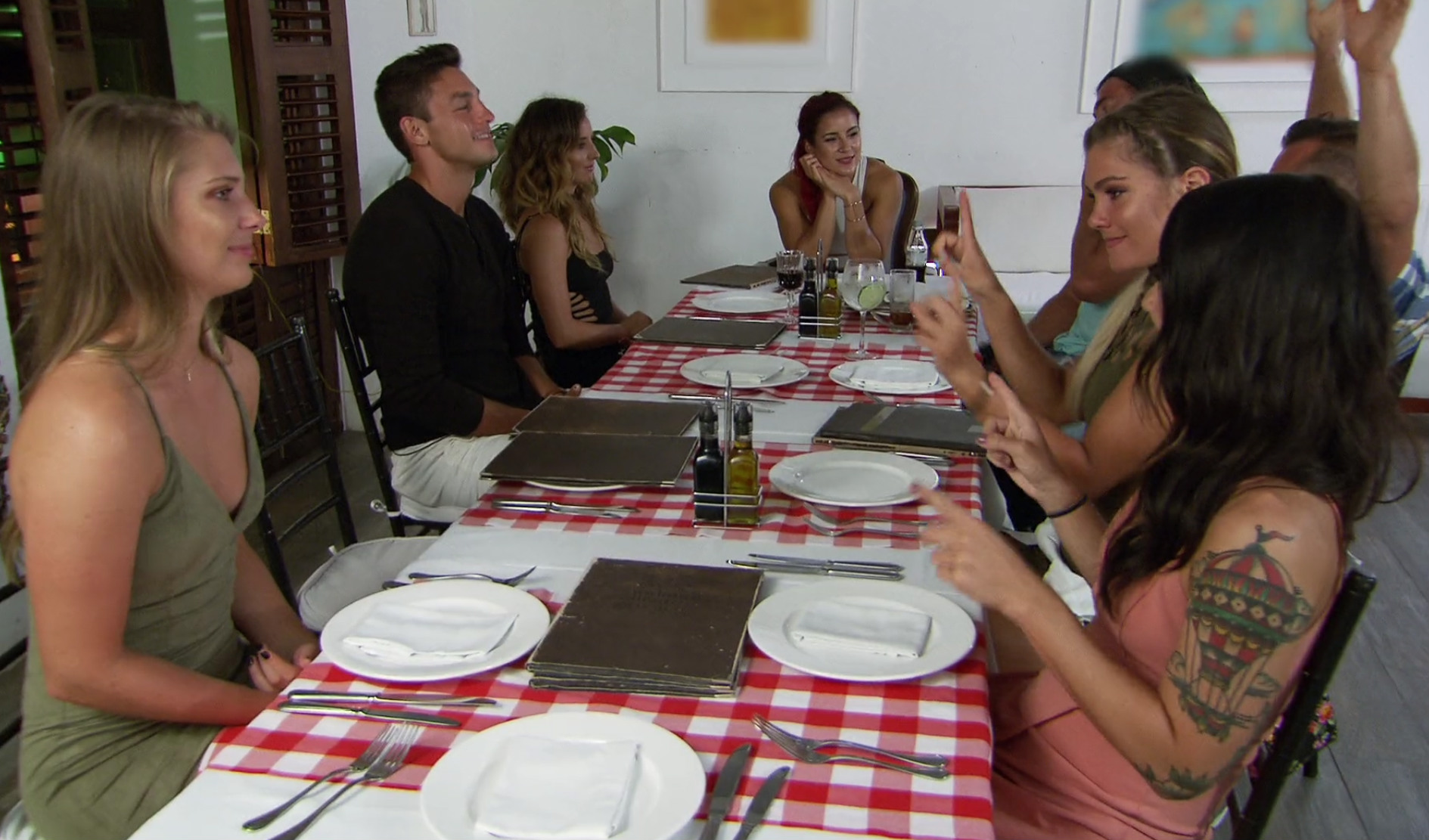 Cara decides to make the dinner as awkward as possible by passively aggressively asking Kailah why she is giving off weird vibes. This was hard for me to watch. Awkward situations on TV make me so uncomfortable that I sometimes mute the TV and put on subtitles to get through them. It allows me to know what is being said without having to hear them talk. I utilized that strategy for part of this dinner scene. Cara announces that she wants to have a talk with Kailah later that night and Kailah says she wants to have it tomorrow. They basically go back and forth trying to be the alpha in the situation and both come off sounding petty.

While CT still remains on Cara Maria’s side, he did have this to say about Cara’s behavior:

CT: “There’s a new generation of competitors coming up in these challenges and us vets, we have to change with the times if you want to stay in this game.”

Couldn’t have said it better if I tried. Kailah and Cara end up having their talk that night, and after Cara Maria tells the camera “You don’t want to make me mad.” Why, because you have so much pull in this game? I don’t understand what makes Cara and Camila feel so entitled. Yes, they are good competitors, but truthfully their gameplay isn’t something to be feared. Neither of them has ever played a politically or socially strategic game. They are no Rachel, Veronica, or Wes.

While the Cara and Kailah drama continues at the house, Hunter goes to the doctor. If you remember he hurt his hand against Leroy in the Presidio two weeks ago. The doctors put a cast on him, tell him that continuing to compete with his injury could cause lifelong irreparable damage to his hand, but Hunter is “tough” and won’t quit now. This is a huge issue I have with these shows and framing players as tough and strong for playing through serious injuries. This isn’t just a few scrapes and bruises, Hunter is in a cast and sling. If he competes and something happens to his arm (which is highly likely) it will impact the rest of his life. The money won from continuing to compete most likely wouldn’t even cover the medical costs caused from further injury. I think it is irresponsible for production to allow him to continue to compete.

The Purge RETURNS (with a million dollars)

Guys, it is time. It is the moment EVERYONE (aka pretty much just TJ) has been waiting for all season! TJ gets to reveal his dirty little million dollar secret to the competitors. THEY ARE ACTUALLY PLAYING FOR THEIR SHARE OF A MILLION DOLLARS. I feel like the player always forget the “your share” part of that sentence every season, because they are not actually winning a million dollars. Anywho, TJ still has another surprise up his sleeve: It is time for The Purge 2.0: “X Marks The Spot.”

The players are allowed to pick their own teammates for this Challenge and the teams shake down like this:

X Marks the Spot consists of four stages. The first three are complete in pairs, and the final stage is an individual task.

Stage 1: The competitors must roll a giant wooden crate through a barn or something to get to….
Stage 2: The pairs have to use a single crowbar to open their crates which contain several numbered ropes and run them to…
Stage 3: This is a number/logic puzzle of a sort. The pairs have to arrange their ropes so that the numbers on the rope equals the sum of the two poles that they are attached to. Once they have successfully completed the puzzle, they can dig up a bag containing puzzle pieces for…
Stage 4: A tangram puzzle that the players have to complete as individuals.

The first two girls and guys to finish the challenge are guaranteed a spot in the final. 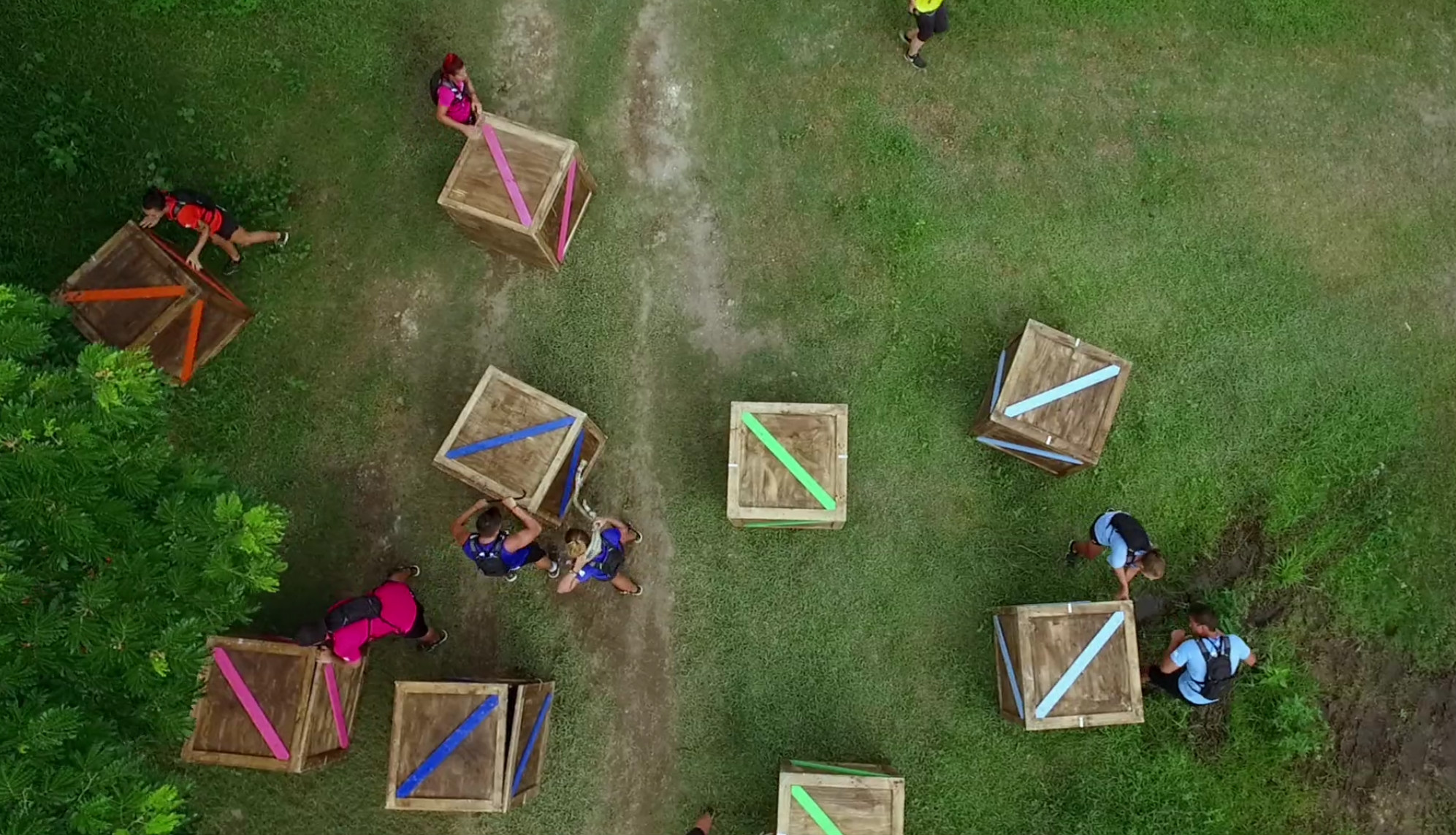 Stage One goes on without a hitch, but it is Stage Two where teams start to have difficulty. CT/Cara and Jordan/Tori breeze through this stage, but other teams seem to struggle. Camila is just screaming at Derrick that he is doing everything wrong as he tries to pry open the crate (poor Derrick), but eventually, he cracks it and chases after the leaders. Kailah and Hunter are at a disadvantage because of Hunter’s injury and Jenna and Tony are at a disadvantage because they have Tony. (Side Note: This is another reason that Hunter shouldn’t have been allowed to stay in the competition, his injury isn’t fair to his teammate Kailah.)

After the teams finish the #MathIsHard puzzle at Stage Three Jordan and CT dig up their first bag of puzzle pieces and hand the off to their respective girls so they can have a head start on Stage 4. Derrick doesn’t offer this same gift to Camila because he does actually need her help digging. Also, Camila is a shitty teammate so why should he do her any favors.

At Stage Four, CT, Cara Maria, Jordan, and Tori are the first to finish their tangrams and secure their place in the final. Camila, of course, is not happy that she didn’t win and blames it all on Derrick. Derrick, on the other hand, isn’t going to play the “sore loser” card. See, he coaches 3rd and 4th graders, and one of the first things he teaches the kids is how to be a good sport. So Derrick is basically saying Camila is a worse sport than a 3rd grader.

Next week, the six losers will have one more chance to procure the last two final spots. There is no real front-runner for the girls, I can see all three of them putting up a good fight. On the guy’s side, Derrick is the obvious front-runner. He is up against an injured Hunter and Tony.

Previous article
Stranger Things Season 2: The Strange-yier Questions We Need Answered
Next article
10 Big Moments From ‘Thor: Ragnarok’ And What They Might Mean