10 Big Moments From ‘Thor: Ragnarok’ And What They Might Mean

After a four year wait, the latest solo adventure for everyone’s favorite God of Thunder is upon us in the form of Thor: Ragnarok.

Directed with goofy energy by filmmaker Taika Waititi this third adventure in Asgard is less Game of Thrones and more Saturday morning cartoon. As someone in the small minority who loves the very first Thor film by Kenneth Branagh I was skeptical of a drastic change in tone but overall this change works after getting through a rocky first act that is unfortunately filled with more jokes that don’t work than ones that do.

Laughs aside, Ragnarok is also filled with quite a few big moments that will have a huge impact on the future of the character and the Marvel Cinematic Universe as a whole as it marches toward Avengers: Infinity War and its untitled sequel. So without further ado let’s recount all of those moments here and discuss what each one might mean for the future.

But be warned – everything is below is full of MASSIVE SPOILERS so please don’t read until after you’ve seen Ragnarok!

Ok, you asked for it…

The Deaths of The Warriors Three

For as long as we’ve known Thor (Chris Hemsworth) we’ve known his three best pals, The Warriors Three, as the valiant bros who would follow him into any danger against all odds. We’ve been led to believe that they are among Asgard’s greatest fighters but in this movie Hela (a delightfully campy Cate Blanchett) shows up and kills Volstagg (Ray Stevenson) and Fandral (Zachary Levi) within seconds of them appearing on screen for the first time. I can’t even remember if they managed to have a line!

Hogun (Tadanobu Asano) gets to put up a little more of a fight against Hela when he shows up later, but is also quickly impaled and taken off of the chess board. It’s clear to see these deaths were meant to showcase the ferocity of Hela and what she can do but they’re thrown in so quickly and with so little emotional buildup that they fail to register with the audience or even anyone on screen. Farewell, friends!

Where is Lady Sif?!

After the quick deaths of The Warriors Three I kept waiting for Lady Sif (Jaimie Alexander) to show up and exact some revenge but don’t hold your breath. She’s nowhere to be seen here. In fact, no one even seems to be missing her. One has to assume the character was safely off-planet and ready to pop up in a future film.

At the end of Thor: The Dark World Loki (Tom Hiddleston) had used his tricks to put himself into Odin’s (Anthony Hopkins) shoes to become the king of Asgard but the real Odin’s fate was left somewhat of a mystery. In this film we quickly learn that Loki banished Odin to Earth so the two half brothers ride the rainbow bridge on down and meets up with Dr. Strange (Benedict Cumberbatch in a somewhat frivolous cameo) who helps locate Odin on a cliff in Norway. It is there that they say a final farewell to the great king but not before he gives them a heads up that they have a demonic older sister named Hela who is about to be free from her purgatory and plans to wreak havoc on everything.

If you’re keeping score that makes 4 relatively major characters in the world of Thor who bite the dust in the first hour of this thing. At this rate Thor 4 could be made for a real bargain price. 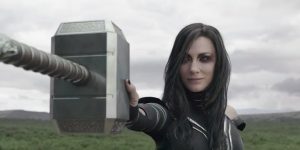 You’ve probably seen this in the trailers or TV spots already but mere minutes after showing up Hela manages to destroy Thor’s trusty hammer Mjölnir (quite easily I might add)! But if you were thinking he’d somehow magically get it back by the end think again. The hammer never flies back into his hand and we’re now left with the thought that Thor might just be using his own body to fight from here on out. Well, saying “just his body” is a little bit of a stretch because…

Thor Gets a Power Boost! 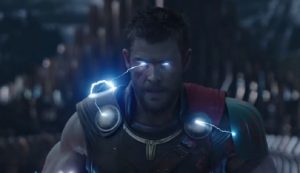 In a moment eerily similar to when Yogurt tells Lone Star in Spaceballs that the Schwartz ring is “bupkis” and the real power is within himself, Thor learns from a vision of Odin that he doesn’t need Mjölnir to fully access his power as the God of Thunder. He merely needs to channel that power internally to make himself get what I liken to a video game power boost that makes him crackle with lightning and shoot powerful bolts while he fights. This added oomph to his strength should come in handy during the upcoming fight with Thanos in Infinity War but I think I personally prefer seeing him beat up bad guys with a hammer.

…But Thor Also Loses An Eye

Gain a power boost. Lose an eyeball. That’s the real lesson of Thor: Ragnarok. In his final battle with Hela, Thor briefly gets bested and loses his right eye to her blades (its not as gruesome as it sounds if you’re worried about traumatizing your children). The film ends with Thor donning an eyepatch similar to the one worn by Odin but one wonders if this is a look that will continue into Infinity War. We haven’t seen a trailer yet but when footage of that film was shown at San Diego Comic Con there was no sight of Thor wearing an eye patch so either he’ll be getting some kind of new eye implanted or maybe Marvel was playing with us in the footage to keep this a secret and will be adding CG eyepatch later on? Only time will tell.

Bruce Banner Had Been in Hulk Mode for Two Years!

One major plot point in the film revolves around Thor being reunited with Hulk on the planet Sakar when they are forced to fight each other in a gladiator arena. After the initial bashing and smashing the two of them get friendly again and we learn that Bruce Banner had been in Hulk form ever since the events of Avengers: Age of Ultron – a whopping TWO YEARS!

When Thor finally coaxes him back to Bruce mode we learn about Bruce’s fear that if he transforms into Hulk once again, he may never be able to turn back. As this film’s final battle kicks off Bruce attempts to simply support Thor in human form but when a giant dog (I’m not kidding) threatens a group of innocent Asgardians Bruce transforms back into the Hulk and remains that way until the credits roll. We’re tempted to think he might be stuck that way forever now but I think its a fair bet that his potential love interest, Black Widow, will be able to pull him back from the green brink.

Ragnarok begins with Thor confronting the villain Surtur (Clancy Brown) who has the goal of uniting his crown with the Eternal Flame that burns beneath Asgard in order to destroy it. Thor wins this early battle and places Surtur’s crown in Asgard’s vault for safekeeping.

Fast forward to the final battle with Hela who gets her strength from Asgard and plans to use that strength to conquer the entire universe. Thor and friends attempt to stop her but realize they just 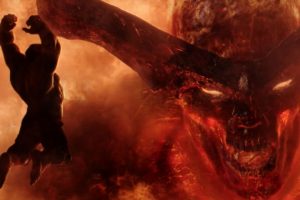 aren’t strong enough so instead they kind of do the unthinkable: pile all of the surviving Asgardians on a lifeboat-esque spacecraft and then allow Surtur to do his thing by destroying Asgard and Hela along with it.

And that’s exactly what happens. This film ends with Thor’s home planet as we know it exploding into millions of tiny pieces. Thor then becomes king of not a physical Asgard but of the people who made it onto the ship and intend to make a new home somewhere else. Will that new home be Earth? I’d say it’s likely!

Remember how at the end of Age of Ultron Thor left on a quest to find the remaining infinity stones? Well, if you were hoping for that to be a plot point here you’ll be sorely disappointed. With a single line of dialogue in Ragnarok’s opening minutes Thor mentions that he went looking for the stones but found nothing. That’s it.

Umm…okay? Guess it wasn’t that important after all?

The film remains devoid of infinity stone hints with the exception of a visit to the vault of Asgard where we not only see a gauntlet for the stones but one of the stones itself – the Tesseract used by Loki in The Avengers. And while we don’t get clear evidence of the theft, good old Loki gives the stone a rather tantalizing look when he goes into the vault. He obviously couldn’t just let it explode with the rest of Asgard so I’d say it’s a good bet it’ll be found in his pockets and knowing Loki’s penchant for evil, I’d say there’s a good bet he’ll use it to get back into Thanos’ good graces.

Who’s in the Big Ship in that Mid-Credits Scene?

In true Marvel Cinematic Universe fashion Ragnarok includes two additional scenes after the movie initially wraps up. The one at the very end of the credits is a funny little bit featuring Jeff Goldblum’s wacky Grandmaster character but the one that appears in the middle of the end credits is a bit more consequential…

Thor and Loki are chatting about the impending return to Earth on their Asgardian lifeboat when they suddenly find their ship sliding right into the shadow of a much larger and menacing ship. The passengers of this new ship are not revealed as the film fades to black. Is it someone completely new on the scene? Someone from the Guardians of the Galaxy side of the universe? Or is it Thanos himself ready to take the Tesseract right out of Loki’s slimy hands?

We learned from the Comic Con footage of Infinity War that the Guardians find Thor floating in space so its probably safe to assume that things don’t go well with whoever is on this ship. But I think we’ll have to wait until May to find out for sure.

I still think the original Thor is still my favorite movie about the God of Thunder but Ragnarok manages to truly shake things up with all of the twists and turns listed above. What theories do you all have about the things mentioned above? Post them now in the comments below!