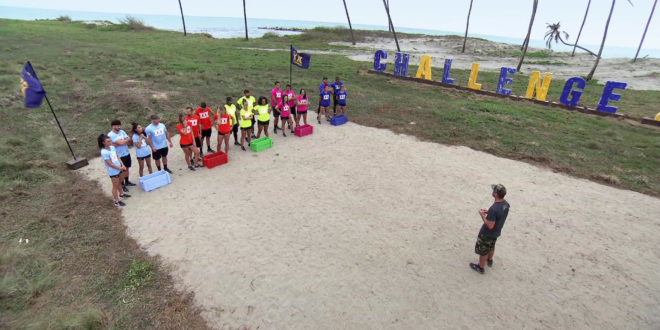 Before I start my traditional episode review I want to address the Aneesa/Veronica hook-up storyline. First of all, the hype that MTV has been pushing the past few days resulted in maybe 5 minutes of screen time where Aneesa was overtly and aggressively flirting with Veronica and they possibly hook up, although it has been confirmed nothing happened. My main takeaway from this was not about their alleged uncomfortably drunken rendezvous, instead, it was the revelation that Veronica and Rachel had, years ago, dated for three years.

Last year I wrote a post about why TV is important to me as a queer woman. In that article, I discussed how the show The L Word helped me contextualize my feelings towards women, and how it was a catalyst for me coming out to myself. Before The L Word, and before I became aware of what those feelings meant, I had a trend of developing extreme crushes on TV personalities or characters from TV shows. Two of these TV personalities happened to be Rachel and Veronica. Although I had been watching The Challenge since the Winnebago days, it wasn’t until Battle of the Sexes that I became a die hard Challenge fan. First and foremost, that season was BONKERS from the get go. I mean the season started off with Jonathan Murray coming on camera to broker a deal for David to spit in Puck’s mouth (I could go on for ages about why this season was amazing, so I am just gonna stop myself here). When Battle of the Sexes aired, it was 2002, I was a freshman in HS, and all I wanted to do was watch The Challenge and wish for Rachel and Veronica to be my best friends. Best friends that cuddled, talked about their deepest darkest secrets, and passionately kissed. My naive 14-year-old self thought that these were things that best friends did (or at least thought about), but never discussed. (As you can gather, 14-year-old me didn’t have that many close female friends, which is part of why I connected so strongly with television).

When Veronica’s former relationship with Rachel was revealed in this week’s episode, I felt like I was transported in a time machine back to freshman year of high school. That is the only reason that I can think of for why this information had such an impact on me: that 14-year-old me would have been ecstatic knowing these two dated, even though at the time I would not have been able to explain to myself why it brought me joy. Maybe the reason I was drawn so strongly to this pairing was that there actually was queer energy emanating from their interactions. In all honesty, I will never know why I gravitated towards Rachel and Veronica, nor why learning a decade later that they dated for 3 years impacted me the way that it did. What I do know though is that these two played a crucial part in my formative years of HS as I was trying to figure out who I was.

With that out of the way, I will continue the rest of the post in my normal Challenge review fashion.

“Ankles Aweigh” begins right where last week left off, with Ammo being shuttled away in an ambulance. TJ announces that Ammo will be fine and “The Show Must Go On” aka it is time for the women to compete.

Marie: “Is Ammo dead? I don’t even know, I’m worried about myself.”

The Challenge house is never lacking in the compassion department. Basically, before you even have time to blink, Tori kicks Marie’s ass and sends her packing. 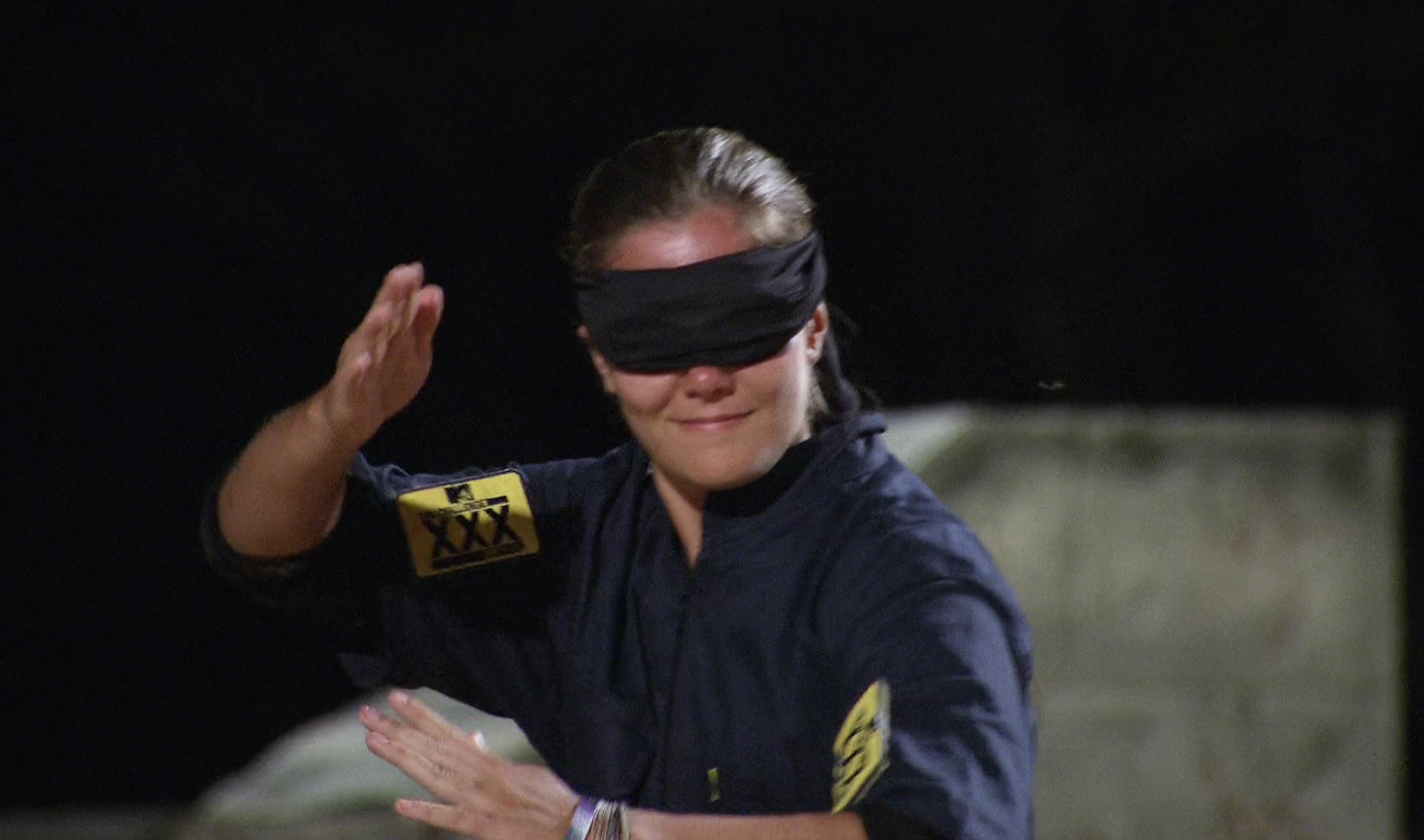 Tori makes me really excited for the new generation of Challenge competitors. Side Note: since Aneesa sent Tori’s ass into elimination, Tori is out for blood, and that blood is named Aneesa.

Ups and Downs and Crashes

The name of the game this week is “Ups and Downs.” Instead of picking names out of a hat, TJ tells the competitors that they will be self selecting teams of 4 (2 girls, 2 guys) to compete in this week’s challenge. Also, they have to do so before knowing what the challenge is. Once the competitors self select, TJ explains the rules:

Ups and Downs Rules: Each team must place the title cards for all 30 seasons of The Challenge in order on a tall podium. One player will be the “Brains” for the team and is in charge or placing each plaque on the podium. The remaining three players are responsible for throwing the “brains” the placards as well as hoisting her up the podium. 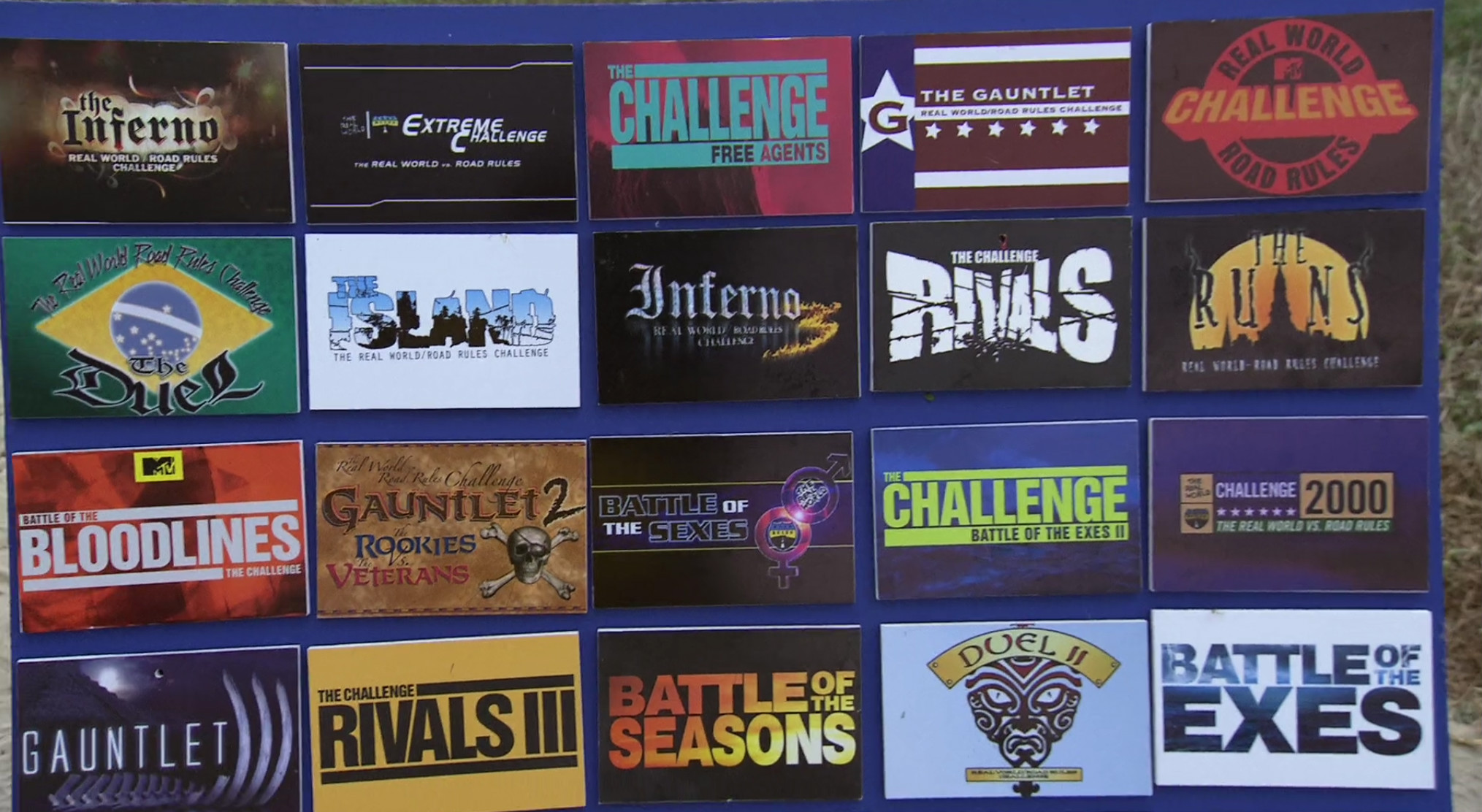 This was the most entertaining challenge I have seen in a while.

The teams with vets, such as Johnny, CT, and Veronica would be expected to have the most success in this challenge. CT is no help to his team. The one player who should have dominated this game is Johnny. As Nicole astutely points out, as this is his 15th season, he has literally participated in 50% of the Challenges.

The star of this challenge though is Camila. Her teammates (CT, Leroy, and Cara Maria) are not paying attention and keep charging towards the placard board, resulting in Camila being slammed into her podium repeatedly. 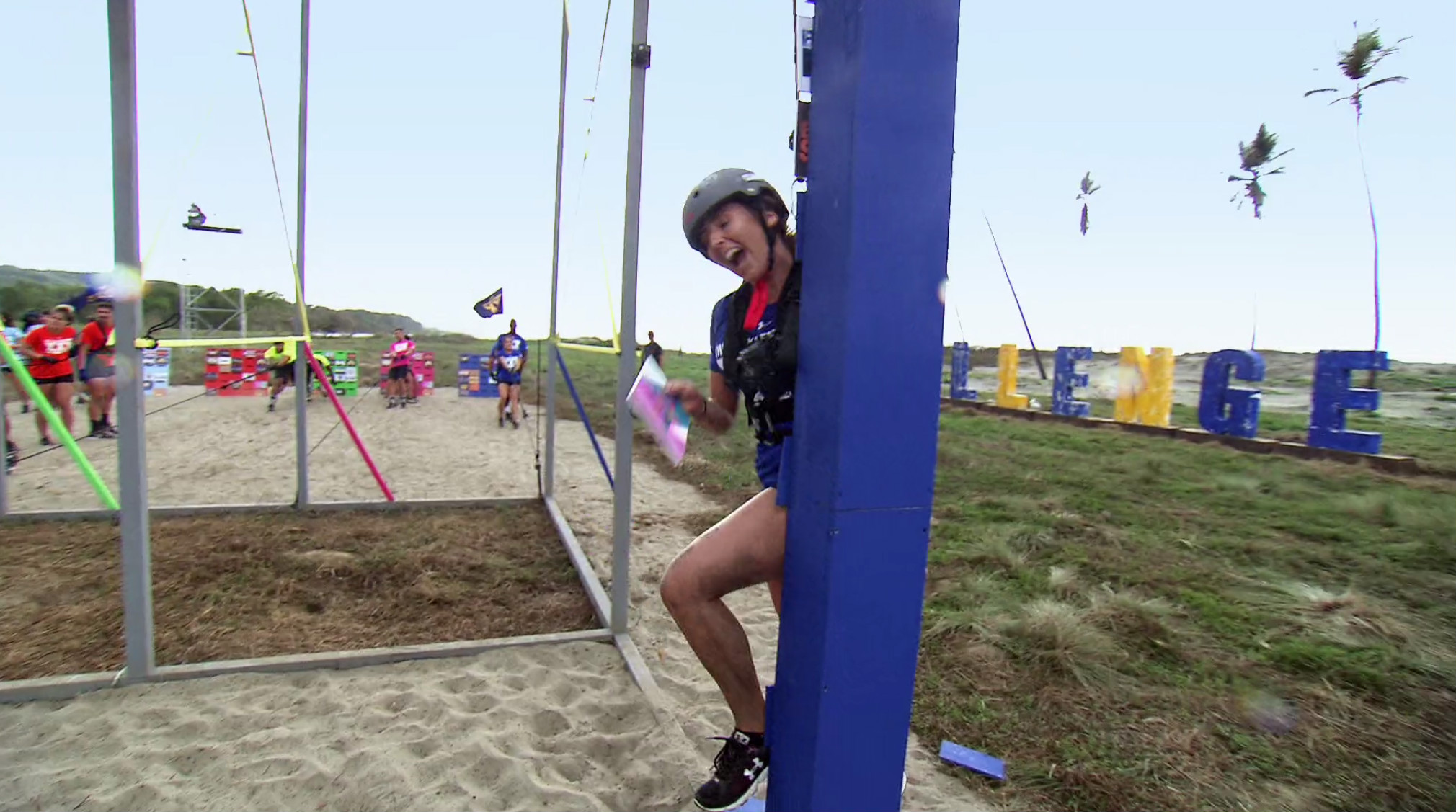 TJ was having a field day watching Camila be flopped around like a rag doll. Even with their lack of coordination, Camila and her team are able to pull out the win to place themselves in the Winner Circle.

The Green Team (Cory, Nelson, Britni, and Aneesa) is the last team to save themselves from the Double Cross, and in the excitement of celebrating Aneesa re-rolls her ankle that she rolled earlier that day while stepping in a rabbit hole.The Light Blue Team (Johnny, Hunter, Kailah, and Nicole) and the Red Team (Derek, Jordan, Tori, and Jenna) are in the bottom and have to face the dreaded Double Cross.

All of the girls, especially Cara Maria, are bitching about how Aneesa’s ankle isn’t really hurt and she is milking the injury for all it is worth. They talk about her behind her back saying that they don’t understand her politics, don’t know where she stands, blah, blah, blah. The only person that really has a valid grudge against Aneesa is Tori, for sending her into an elimination via pulling the double cross.

When it comes time to vote, Aneesa is unanimously voted in. Leroy and Camila gave a tepid explanation for their choice, saying that they wouldn’t want to compete in a final with an injured player. Cara Maria uses this as a reason as well, but adds in her interview “Let’s see how injured she really is.” I feel like that is fresh coming from Cara seeing as she once competed with a broken hand. Did her competing with that injury and pushing past the pain mean she was any less injured?

The harshest critique of Aneesa came from CT though, and it seemed to come out of left field. As Leroy paraphrased it, CT essentially called Aneesa the shittiest player in the house and that he would rather have a dead ant on his team than her, even without the injury. I really don’t understand the hate that Aneesa gets on these challenge for being a shitty competitor. I understand, she isn’t a Cara Maria or a Laurel, those girls are straight up beasts, but she is a good competitor. She came in third place in the first challenge this season where she had to run with a huge ass cannonball. She has won 8 out of 16 elimination challenges, which isn’t the worst record out there. So I just don’t understand all of the hate.

For the guys, as expected, Cory is unanimously sent in.

At the Presidio, Nicole is the lucky player to pull out the Double Cross, and sends Kailah into battle. She tells TJ that sending in Kailah is nothing personal, only for the show to cut to her one-on-one interview:

Oh man, Nicole is so entertaining.

For the boys, Jordan pulls the Double Cross and sends in Hunter to fight it out with his bestie Cory.

The name of the game is “Dead Weight.” 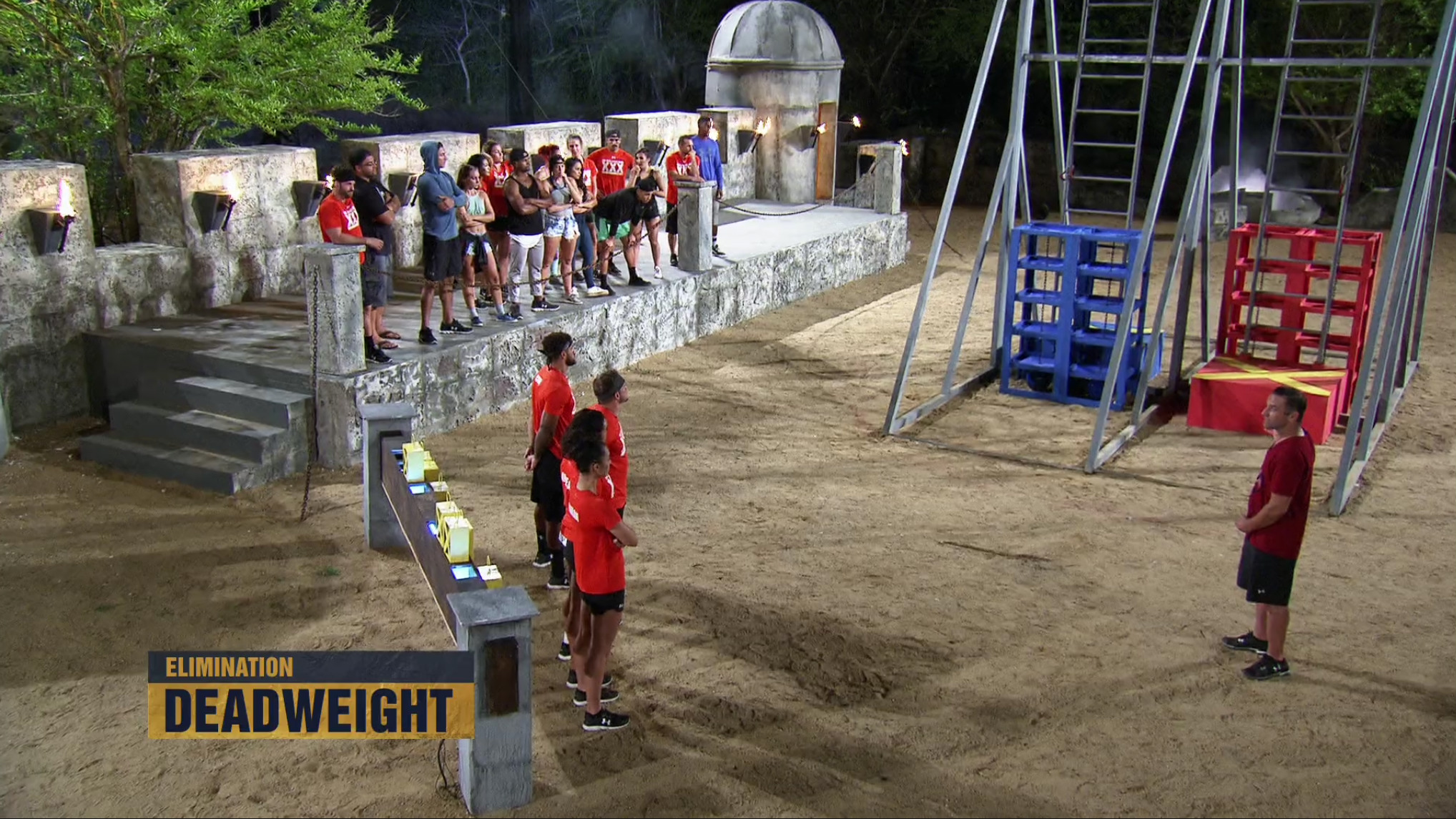 Each player will have a ball and chain attatched to each of their ankles. Their goal is to use pull up those balls to smash through several boards, and climb up a ladder. The first one to ring the bell on top wins. Suffice to say Aneesa isn’t excited to have weight hanging directly from the ankle she just injured, but she is a trooper and carries on. In the end Kailah comes out victorious, and Aneesa is sent home/ to the redemption house. We will have to wait until next week to see the outcome of the Bestie Showdown: Cory Vs. Hunter.

It takes alot for me to be truly surprised by a Challenge twist now-a-days, but MTV you have pulled it off. I thought for sure we had seen the last of The Redemption house after Jenna and Tony took their spots back in the house. But I was wrong. Instead of being shuttled to a hotel before flying back to the US, Marie is transported to The Redemption House and given a second shot at the competition. When Marie arrives, she starts shouting out for Ammo, and when she realizes that he isn’t in the house pours herself two glasses of wine and contemplates how lonely she will be in this house. 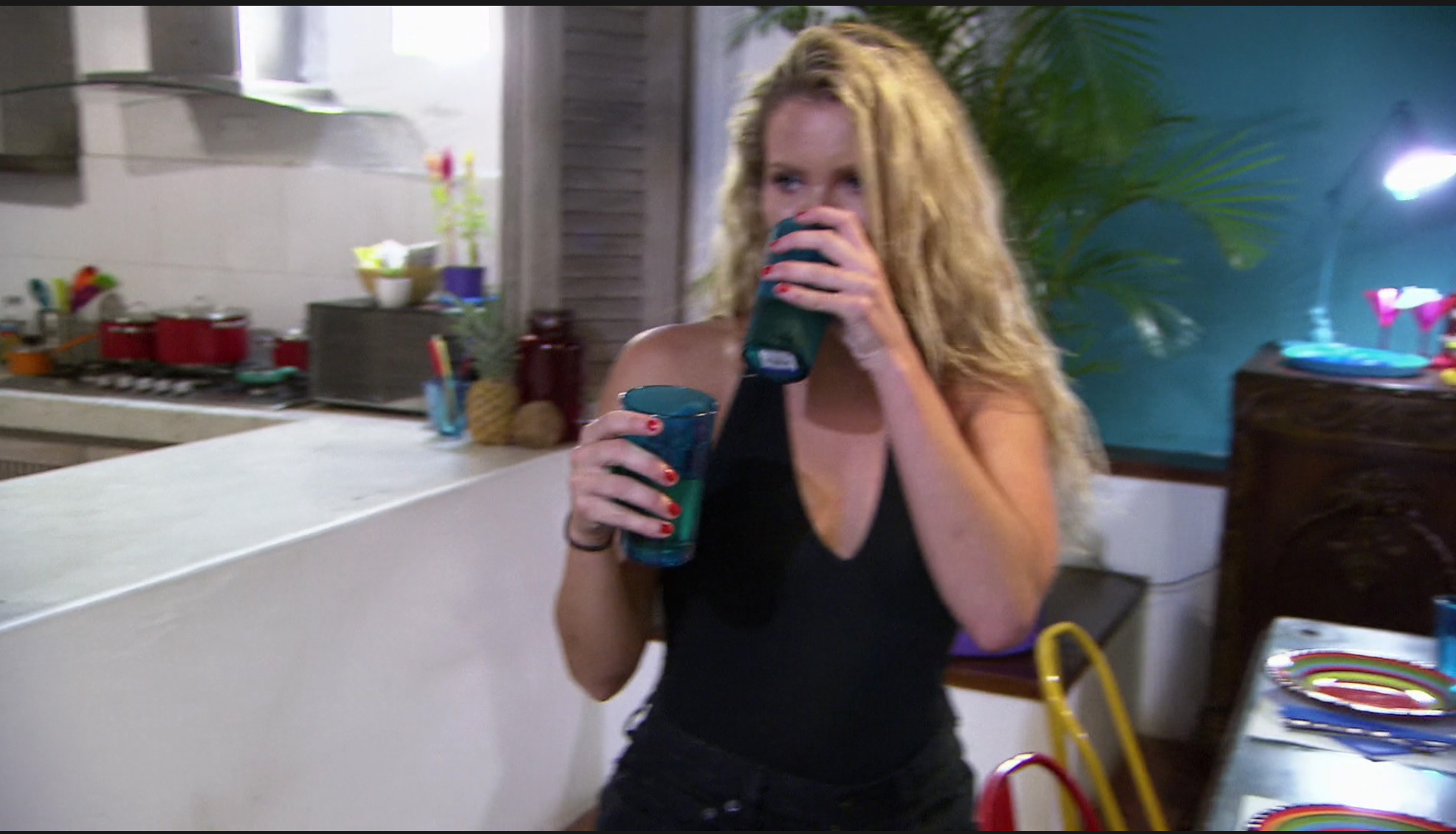 I need to bring up the best part of Marie arriving at The Redemption House, and that is the guest book. I compiled all of the screenshots of the notes left inside. 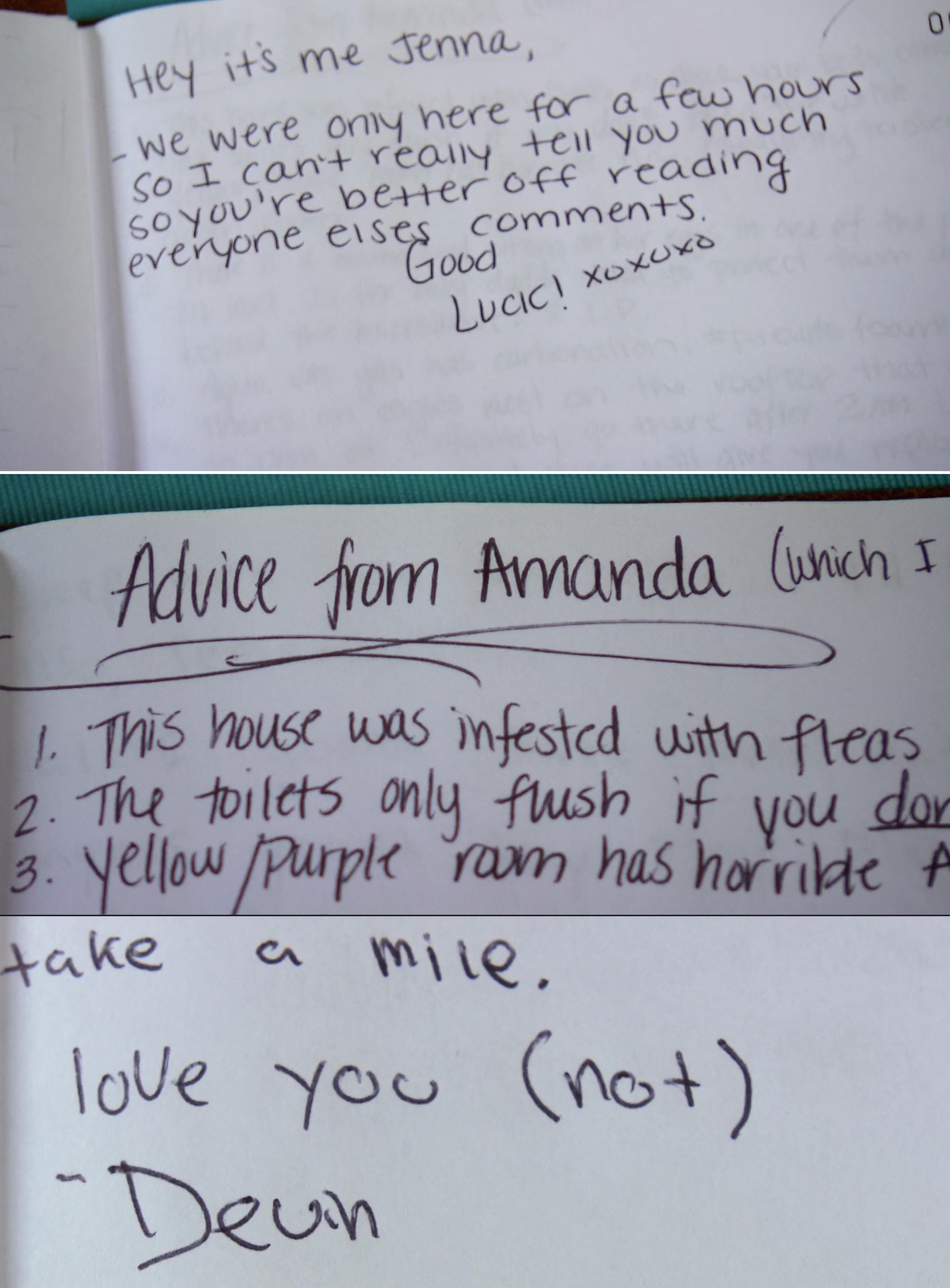 Was the guest book mentioned at all before this? Here is my main question though, does the fact that Jenna wrote advice in the book mean that she knows that more players will be sent into The Redemption house? Do you think she knows and didn’t tell anyone or her and Tony were too oblivious about what her writing advice for those to come implied?

Alyssa (TV Editor) likes long walks on the beach, Greek food, talking about television, watching a good sunset, and girls who wear glasses. Wait, this isn't a bio for OKCupid? Alyssa got her start recapping in college when her friends got tired of her constantly talking about TV and suggested she start a blog. The idea was if she wrote about TV she would talk about it less. Well her friends succeeded in one of their goals...she started writing about TV.
@tvwithapb
Previous ‘Dark Matter’ – “Nowhere to Go”: What’s Worse Than Corporate War?
Next ‘Game of Thrones’ – “The Dragon and the Wolf”: Chaos is Not Leaving A Note, Bran