This week on the season finale of #DarkMatter: Two makes a deal with Ryo, the Raza is betrayed, Five remains the best.

Dark Matter has absolutely no chill when it comes to cliffhangers at the end of each season. Season one ended with the crew of the Raza being betrayed by Six and dragged off the Raza by the GA. Season two ended with a space station blowing up and the lives of the crew hanging in the balance. Season three ended with a betrayal and SURPRISE ALIEN INVASION.

Dark Matter is a show that doesn’t follow season-long arcs. There are no real “big bads” in Dark Matter, only enemies and extremely judgmental allies. It’s one of the quirks of Dark Matter that makes it different from most other shows. For Dark Matter, because the series is all over the place narratively with the threat of corporate war, Ryo’s ongoing hunt for the blink drive, and the new enemy in the form of aliens, it’s anyone’s guess who will show up in the finale. And it makes it confusing to remember who fits in where and how. (Remembering the different corporations and all the outlying characters can be challenging for casual viewers. Even I find myself Google searching referenced character names and I watch the episodes several times.) The aliens that infected Three didn’t make a reappearance until an entire year later, so you can’t blame fans for not remembering how it all worked. Because of this nature to jump around, the twists on Dark Matter, like the alien invasion, feel more disjointed than shocking. They’re still good twists, mind you, but they take a second to sink in, reminding viewers, “Oh yea. That’s a thing.”

But let’s get into a quick recap, shall we?

The Problem With Four

At the end of last week, the five Raza crew members voted to kill Ryo Ishida, as he posed too much of a threat. Ryo is uncharacteristically calm about the decision to end his life and he takes it in stride, commenting that he would do the same thing if he were in Two’s shoes. But…why? If Ryo is so accepting of his fate, if he so understands the crew of the Raza, why didn’t he talk to them at any point before betraying them? Why didn’t he talk to them before sending assassins and laying traps? Is it because he knew he had lost? I know that Ryo DID approach Two several times about the blink drive, trying to make a well-reasoned deal to acquire the technology, and he did his best to make sure that the crew members remained relatively unharmed. It’s clear that even with his memories, Four is still in there. He still loves the crew of the Raza. Four seems like the kind of character who would accept his death gracefully. I don’t know if Ryo is the same. And maybe that’s the point. Maybe Ryo is realizing that he was happier as Four than he ever was as Ryo and even with his old memories, it’s better if he returns that calmer, more meditative personality. 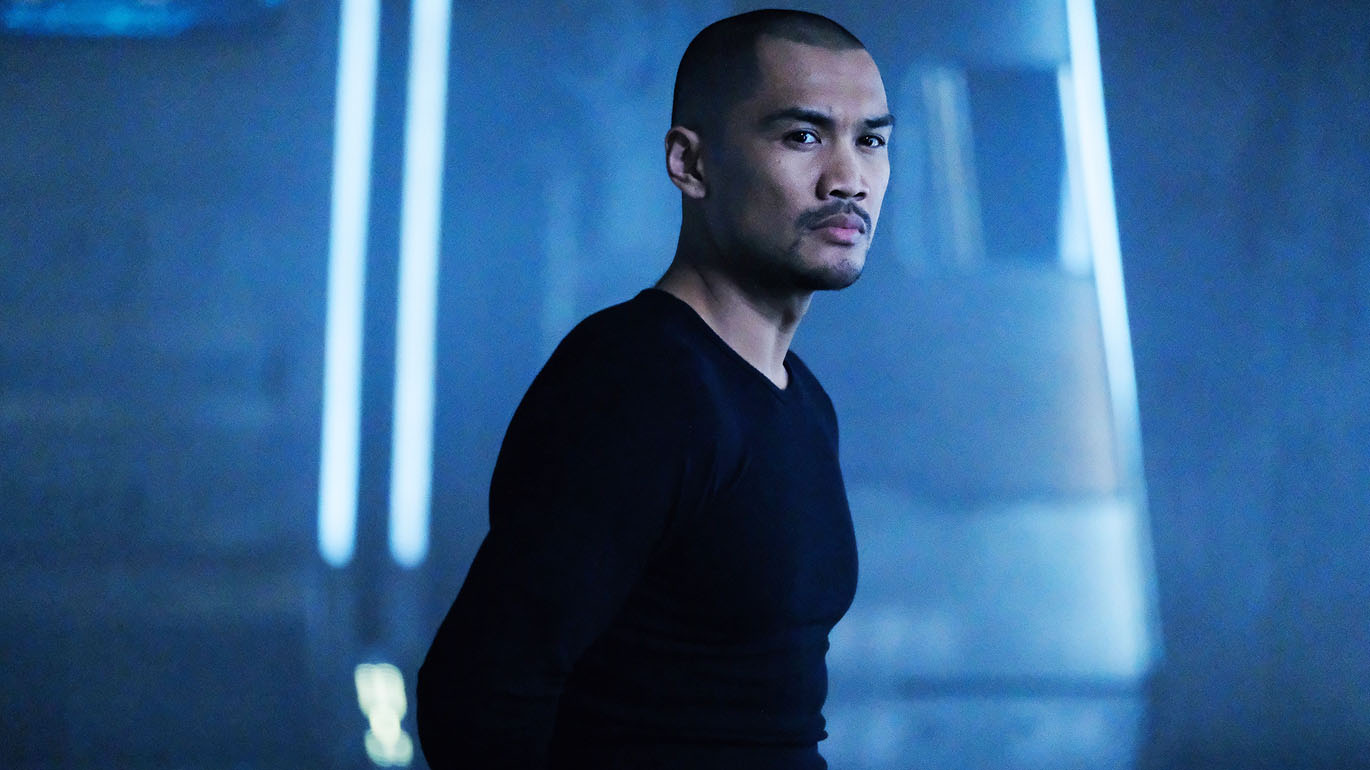 Later in the episode, Ryo learns that Teku and a dozen or so Ishida ships remain loyal to his rule, will he plan to escape back to them or has he had a change of heart? We’ve already seen him manipulate the Raza crew with knowledge he knows they want. Now that he has been granted a stay of execution, will he betray the Raza again? I love Ryo. I think he’s a wonderful, stoic character with a pragmatism that shines in the chaotic world of Dark Matter. I want to understand his changes. I want all the best things for him, especially if that means a return to the Raza, even though he was indirectly responsible for the death of Nyx.

(By the way, Dark Matter, are we ever going to discuss that near dream kiss between Two and Nyx?)

The fall of the Ishida Empire is over quickly so instead, most of the episode follows the Raza, allied with Mikkei, trying to prevent Ferrous Corp from dogpiling the entire universe with their rampaging ships. After Teku trades Boone’s whereabouts for the safety of Ryo, the Raza crew learns that Ferrous Corp has an entire fleet nearing completion, which is disaster for, well, everyone. With Mikkei’s help, and their new alliance with Traugott, they make a plan to use a white hole device (previously seen in season one) to take out the entire facility, humans and all. Six tries to squabble about killing innocents but Three is all, “Yea, yea. You’re the good guy. We get it.” And then they move on to plot more destruction and mayhem. 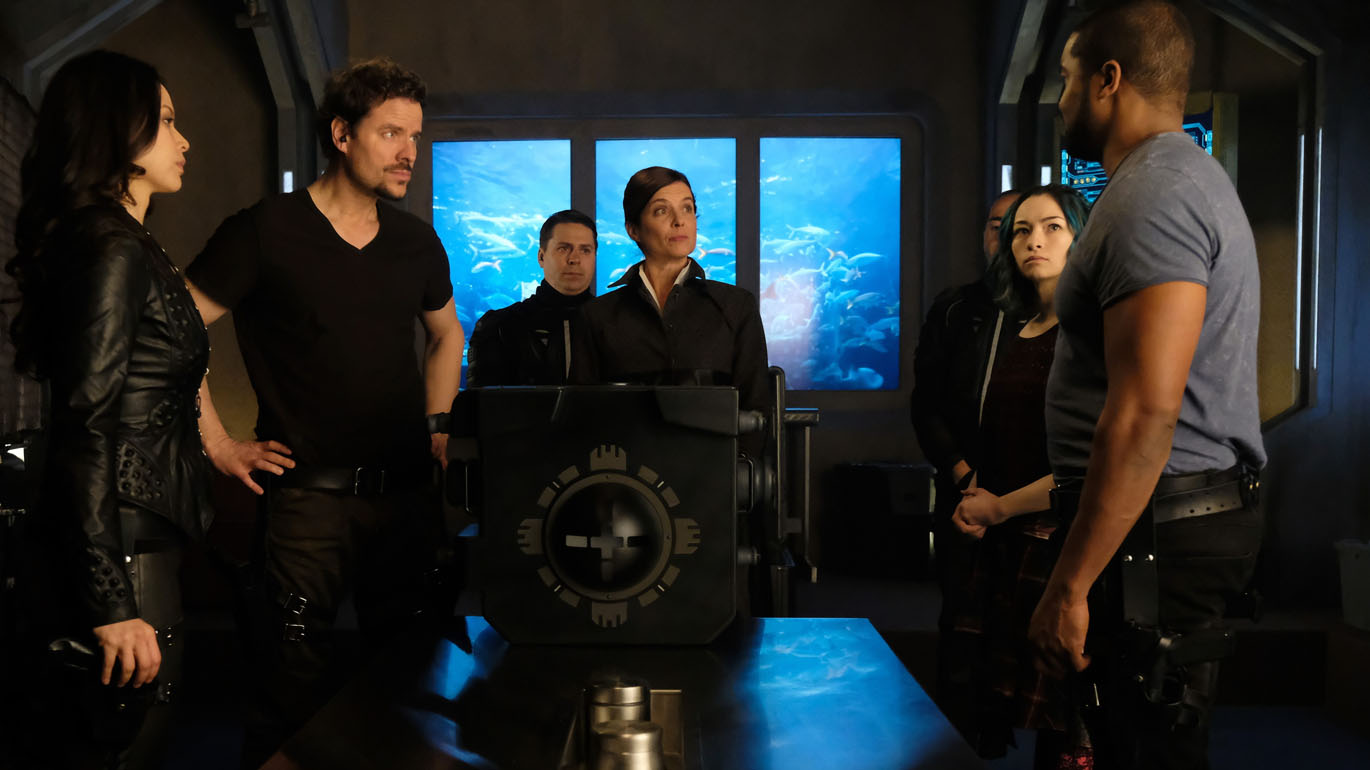 Except Traugott, the owners of said device, betray Mikkei, and with the help of several newly allied Ferrous Corp corporations, they manage to severely weaken Commander Truffault’s fleet. The Raza gets caught up on the betrayal when the white hole device doesn’t go boom and instead they’re brought on board as prisoners. They find an unlikely companion in Wexler, the toothpick sucking mercenary from their alternate reality, and with his help, two and Six manage to escape. My sweet, lovesick puppy Three, is unfortunately left behind.

The aliens from “The Dwarf Star Conspiracy” make a reappearance and this time they’ve set their sights on Two. After being infected on board the Ferrous Corp Station, Two encourages all out war to stop Ferrous Corp from taking the lead. Six was clever in questioning an unguarded Two, making sure that she wasn’t Portia Lin instead. But even he forgot about the looming alien threat. (They did say they were everywhere, we just didn’t know how prevalent “everywhere” was.)

Honestly, I’m surprised no one, FIVE ESPECIALLY, noticed anything wrong with Two. Knowing how dedicated Two is to protecting her crew, it seems suspicious that she’d be so cavalier about leaving Three behind, or worse, killing him in blast to destroy the station. Also, I’m confused about the nature of the aliens using hosts. When Three was infected “The Dwarf Star Conspiracy”, he was still mostly himself, outside of the debilitating visions. Two, however, seems completely changed, as if her entire mental state has been taken over by the alien invaders. I’m sure that season four will take more time to explain the aliens, the black ships, and what all this means for the crew, but for now, without rules, it all seems too convenient.

Two manages to convince the crew to give up two of their most precious pieces of cargo: the blink drive (that they finally got back) and Six. By overriding the blink drive, Two believes they can blow up the space station, thereby salvaging a losing battle against Ferrous Corp. Without remote detonation, Six agrees to sacrifice himself for the cause. Five, rightfully so, pleads with Six not to go. I’m sure that by now she knows she’s the only survivor far into the future, so watching Six leave is a reminder that soon she’ll be all alone on the Raza. Also, Five has the BEST relationships with all the crew members, so of course she never wants them to leave. It was a tearful goodbye between the two of them and while I think it might have been the best move story-wise for Six, I’m devastated for Five. When she cries, I cry.

Five is the best.

Of course, the blink drive destruction doesn’t quite go as planned and instead, Two’s betrayal opens a portal, allowing her alien friends, The Black Ships, to ruin all the battle royale fun Ferrous Corp had in the making.

We’ve been through a lot, have we not? Remember all those years when I was the only one watching Defiance as it aired live? Those were good times. Here at The Workprint, we’re big fans of your shows. Killjoys, Wynonna Earp, and Dark Matter are all staples for us and we consider them to be must-watch television. Dark Matter isn’t a perfect show by any means. I know I’ve had my tiffs with poor Joseph Mallozzi in the past, but he seems like a good guy, and I love this show. I want to see how it plays out. And more importantly, I want to know how right/wrong I am about all those Android time skips. Dark Matter is a show with action and heart with fantastically well-rounded characters. Renew this shit for season four. Immediately.

I think even more than the disjointed main arcs, it’s the small seemingly innocuous scenes that draw the most confusion. Ryo already laid the groundwork for Two to search for her daughter, so Android mentioning unlocking the Kryden files seemed an unnecessary addition to an already information-heavy episode. The same goes for Three visiting Sarah’s virtual home, but I’m kind of okay with that since I’m a big fan of Three being a romantic sap.

There’s a part of me that still holds out hope that Six is alive somewhere. Maybe because the portal wasn’t all kaboom and chaos, he’s still out there in space, floating around with the Marauder AND the blink drive. One can dream, right?