Brooklyn Nine-Nine is, as ever, a finely tuned ensemble comedy machine. It doesn’t shy away from throwing its entire cast into the mix in any given episode, often with their own small but satisfying story arcs. “Boyle-Linetti Wedding” contains what seems like half a dozen storylines for its various characters, but the short half hour somehow never feels overcrowded or underdeveloped. The entire precinct scrambles to complete their assigned tasks in preparation the marriage of Charles and Gina’s parents; meanwhile, Peralta pines after a grade school crush, Santiago closes in on a counterfeiter she’s been chasing for two years, Diaz struggles with admitting her feelings to Marcus, and Terry and Captain Holt try their best to prepare a heartfelt speech. That’s an awful lot to fit into a short half hour, but the storylines keep humming along and everyone gets a moment to shine in a masterful exercise in controlled chaos.

The time has finally come. As Gina so succinctly puts it: “My mother is marrying–shudder–Charles’s dad, toilet emoji.” While she and Charles try their best to keep the wedding running smoothly, the rest of the precinct encounter their own problems while helping with the preparations. The largest storyline is probably the “will they, won’t they” pairing of Jake and Amy. Jake is tasked with picking up the wedding ring, but is preoccupied upon learning that his childhood crush will be attending, and loses it while helping Amy catch her counterfeiter. While it’s exciting to see the spark be reignited between Jake and Amy, Brooklyn Nine-Nine is foremost a show about friendships, and never loses that priority here. The sentimentality doesn’t weigh down the storyline at all–the fun they have and the support they provide each other is the main focal point. The two make a great team when they’re getting along, and ultimately the best argument that they should be together is their incredibly healthy friendship.

Terry and Captain Holt, meanwhile, are tasked with officiating the wedding and preparing a speech when Gina’s priest drops out. Terry is too sentimental to give the speech without crying, so the responsibility falls on Ray, which goes about as well as you’d expect. Where Terry can only utilize gym metaphors without breaking down into tears, the best analogy Holt is able to muster is a comparison between love and oatmeal (it sustains you), and it took him two hours to write. He finally finds his inspiration when thinking back upon his own wedding to Kevin (which was rushed because they weren’t sure how quickly gay marriage would be struck down). It’s the most touching speech containing an oatmeal analogy ever written. 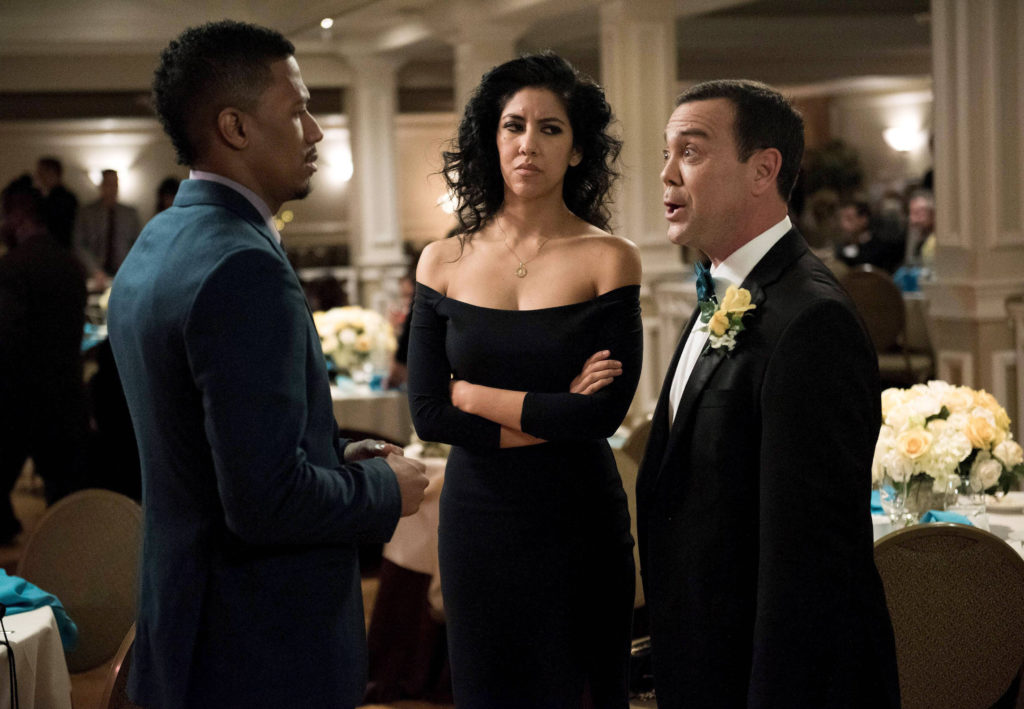 Rosa avoids inviting Marcus to the wedding because of her fear of commitment. Her relationship with Marcus is one of Brooklyn Nine-Nine’s stronger storylines this season. It’s given her character a lot of depth and opportunities for growth, and it’s always amusing to watch her out of her comfort zone. Her uncertainty proves to be contagious, as she causes Charles’s father Lynn to panic and second guess every decision he’s ever made (“Oh my god, why did I buy a cube-shaped car?!”). Despite Charles and Rosa’s attempt to calm his fears, it ultimately takes Gina to talk some sense into him. Her appeal to Lynn’s courage also resonates with Rosa, who musters up the courage to invite Marcus. Charles and Rosa’s friendship is proving to be one of the show’s stronger elements–they both fill important supportive niches for each other and their chemistry is unique and hilarious. It’s easy to forget the awkward obsession Charles had for her last season.

Bringing up the rear are Hitchcock and Scully, who still haven’t gotten a significant storyline of their own, but are there to add their own distinct flavor to the chaos. When the smoke machine breaks, Hitchcock offers to crouch behind the altar and vape, while later on Scully buys the group time by singing songs (cut to his terrible, music-less rendition of Simple Minds’ “Don’t You (Forget About Me)”).

It’s an incredibly busy episode that doesn’t feel rushed, and manages to fit in a wedding, some police work, and several other subplots into a short half hour without ever missing a beat. What other show can claim that?