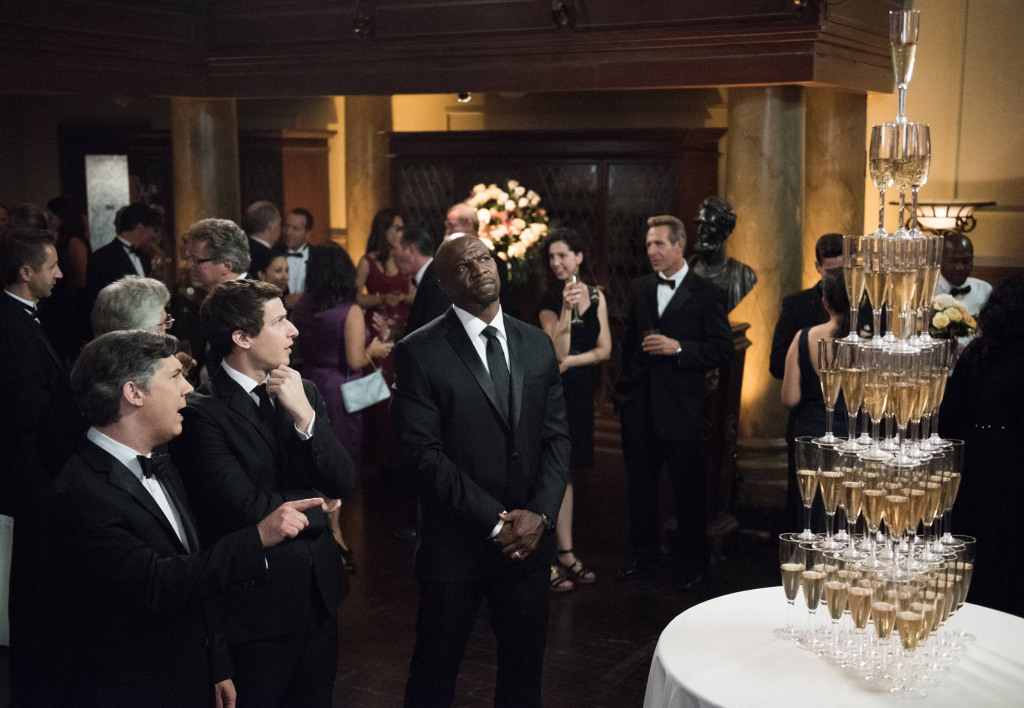 I’m consistently impressed by Brooklyn Nine-Nine’s ability to fit so much story and comedy into a short half hour. Where most other sitcoms risk spreading themselves thin on any given week, this show frequently manages to juggle multiple storylines for its large main cast without feeling too crowded or rushed. “Defense Rests” is packed with great moments and provides a slightly more nuanced take on some classic sitcom plotlines.

Jake has sensed some distance in her relationship with Sophia, the public defense lawyer. His suspicions are confirmed when Sophia requests that they take a break, saying that her relationship with a cop is causing her boss Geoffrey Hoytsman (played by Chris Parnell) to pass over her with cases. Jake understands without truly understanding, and makes it his mission to befriend and win over Hoystman at a fundraising dinner for the Association of Brooklyn Public Defenders. He convinces Terry to support him on his quest by appealing to Terry’s love for love, and as always Terry makes a great straight man to Peralta’s antics. Jake quickly makes a breakthrough by bonding over Hoytsman’s penchant for gambling, but the discovery of cocaine use in the bathroom leads Jake to arrest him in front of all his friends and colleagues.

Jake’s misguided attempts at salvaging his flagging relationship with Sophia backfires in a predictably spectacular fashion and ultimately leads to their break up, but I was pleasantly surprised at how undramatic and mature the break up itself actually ended up being. There isn’t any of the yelling or tears that we’ve come to expect from the end of a major character’s relationship, and Jake’s last minute chase and declaration of love fail to change Sophia’s mind–he’s mostly just left breathless, and confused upon learning that Romeo and Juliet ends in a double suicide. It’s an uncommon approach to doomed on-screen relationships. The relationship isn’t drawn out and there’s not that much melodrama; merely an incompatibility that one party isn’t willing to try and surmount.

Meanwhile, Wuntch approaches Captain Holt to ask for a recommendation for a potential promotion to the Boston police department. Despite the ultimate opportunity to torpedo her chances, Holt nevertheless takes the high road on Diaz’s advice. He still finds the chance for passive-aggressive retribution by buying her tickets to Wicked in Boston (“Enjoy the understudies, Madeline. Have fun watching some chubby Chenoweth knock-off warble her way through ‘Popular.’”). But as it turns out, Holt’s good recommendation only gave Wuntch the leverage she needed to earn a promotion within the NYPD. Andre Braugher once again nails the subtle physical comedy here, from his barely-contained eagerness at the thought of revenge to his flabberghasted reaction to Wuntch’s victory. It would’ve been easy for the storyline let Holt have his high road revenge cake and eat it too, but it’s nice to see the writers take that one extra step to have it all blow up in his face.

The final subplot sees Gina’s increased hostilities towards Boyle over the past couple of episodes brought to light. As it turns out, their parents’ relationship has gotten rather serious, and Gina refuses to give her blessing for their marriage. With Amy’s help (and her massive conflict resolution binder), Gina eventually reveals that she’s simply worried for her mother, and doesn’t want her to be hurt again. She eventually gives her consent after a quick meeting with Charles’s father to be sure of his intentions. It’s a short and sweet storyline that nevertheless manages to cram in a ton of great humor; Boyle’s relentlessly uncomfortable euphemisms (“tender sexing”), Gina’s scathing hostility (“The only reason I didn’t tell you guys is because I don’t value you as people. So it’s like, why be honest?”), and Amy’s love for all things lame (“I’m a notary, no big deal. I met the comptroller.”).

The episode ends with Peralta and Holt wallowing in their respective defeats at the bar, and the others celebrating the engagement of Charles and Gina’s parents. Doing the right thing and taking the high road didn’t work out for Peralta or Holt, which was a simple twist kept the episode from venturing into cliche. “Defense Rests” manages to juggle three strong storylines effortlessly, without any of the pacing or comedy suffering. What more could you ask for?

@theworkprint
Follow
Previous article
Winter Storm Juno hits the Northeast but at least it’s not a Double Down Dog from KFC
Next article
Review: “The Bachelor” Just Keeps Getting Dumber and Dumber (and Dumber)