Next up: Black Widow and Hawkeye!

Well, yes. A spy…and so much more. We were first introduced to Scarlett Johansson’s Black Widow (aka Natasha Romanov) in Iron Man 2, when she went undercover at Stark Industries. Posing as Natalie Rushman and working for S.H.I.E.L.D., Nick Fury assigned her the not-so-simple task of keeping Stark in line – though after her cover was revealed, the two would later work together to help take down Whiplash, a shadowy figure from Tony’s past bent on destroying him.

SO WHAT DID SHE DO AFTER SHE WAS DONE BABYSITTING TONY STARK?

We’ll assume she kept going on different kinds of missions, given the nature of her job, because the next time we see Black Widow in The Avengers, she’s tied to a chair doing what she does best – extracting information. Her mission gets cut short when she gets a cryptic phone call from Agent Coulson, who informs her that her partner Hawkeye has been taken by Loki. And therein spirals all of the events that bring Hulk, Iron Man, Captain America and Thor together to save the world

Black Widow basically becomes the through-line of the movie in many ways – she helps round up the rogue superheroes, she tries to keep everyone rational, she’s the person who gets Hawkeye back without killing him (and she does it by knocking him out) and hell, she’s even the one who is quick-thinking enough to close the alien portal that saves Earth. Basically, Black Widow ruled…even her screentime said so.

SO WE’VE GOT THREE IRON MAN FILMS, TWO CAPTAIN AMERICA FILMS, I HEAR THERE’S GOING TO BE A THIRD THOR FILM. IF SHE’S SO GREAT AND SUCH AN IMPORTANT CHARACTER, WHERE’S HER MOVIE?

I don’t know, and I wish I did. Unfortunately, I’m not in charge of how movies get made, otherwise we would’ve seen this years ago. She did play a significant role in Captain America: The Winter Soldier, where she was partnered with Steve Rogers. After Steve’s best friend Bucky returns, Black Widow is forced to confront the realization that S.H.I.E.L.D. – the place she thought she was working for honestly – has really been corrupt, posing as Hydra. By the end of the film, she’s made the decision to dump all of Hydra’s files online, so that the truth can be exposed. In doing so, however, she also inadvertently lets loose all the secrets of her past. We last left her heading off into the sunset to essentially reclaim her identity. 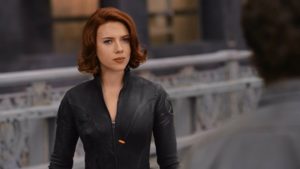 DID SHE GO MEET UP WITH HAWKEYE? WHAT’S THE DEAL WITH THAT, ANYWAY? ARE THEY LIKE, TOGETHER??

Well, kind of. And kind of not. In the comics, the two have had an on-and-off relationship, although both have also been with other people. In the movies, however, we don’t really get any information about Black Widow’s past, save for a few hints about the fact sometime, long long ago, Hawkeye saved her when he was supposed to kill her. And of course, there’s the always-referenced-but-never-explained Budapest. It would certainly not be a lie to say that there’s something going on between them, even if it was never officially confirmed. But in Winter Soldier, she consistently wore an arrow necklace referencing her loyalty to Hawkeye, and it’s been suggested that based on their shared pasts, the two have a very close friendship that they’ve built over the years.

OKAY, THANKS FOR CLEARING THAT UP, BECAUSE I GUESS I’M CONFUSED. I’VE BEEN HEARING A LOT ABOUT A BLACK WIDOW/HULK THING IN AGE OF ULTRON.

Joss Whedon has made no secret that there’s certainly something romantic going on between the two characters in the film. But we’re still not sure what the specifics of that are, and how that figures into her past with Hawkeye, and what Black Widow’s relationships mean for her future. We’ll find out soon!

Definitely. It’s been confirmed that we’ll see glimpses into Black Widow’s life in the Red Room, as well as possible other secrets. As for Hawkeye, there’s been…well, let’s just say there’s been some rumored rumblings about his past that will apparently come to light. We’ll also find out much more about his character as a whole, as he’s very involved in the film this time around – and he plays a large role in everything that happens.

GOOD. BECAUSE I MEAN, HE’S NOT THAT IMPORTANT, RIGHT?

HOLD YOUR TONGUE, CHILD. Jeremy Renner is a fantastic actor. Hawkeye is supremely important and one of the best characters in the movies. 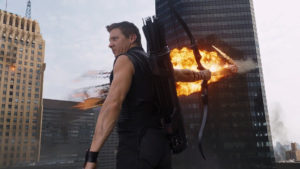 UMMM….WHY? ARE YOU LIKE, THE DEFENDER OF THE HAWKEYE FAN CLUB? HE WAS BARELY IN AVENGERS TO BEGIN WITH. AND IT’S NOT LIKE HE’S HAD ANY SOLO FILM.

True, he did kind of get the crap end of the deal for a bit. He was introduced briefly in Thor with an uncredited cameo that was basically supposed to be used as an introduction to his character in Avengers. And then once we got to Avengers, he spent a majority of the movie as a bad guy, brainwashed by Loki. He only really got to participate in the last half of the film during the big Battle of New York.

SO THERE’S HOPE FOR MORE HAWKEY IN THE FUTURE?

He’s currently signed on for the next Marvel film, Captain America: Civil War. So, yes!

WANT MORE BACK STORY THAN MARVEL HAS GIVEN THESE TWO SO FAR? CHECK OUT THESE COMICS:

Name of the Rose

AND PLEASE NEVER FORGET THAT ONE TIME BLACK WIDOW AND CAPTAIN AMERICA INFILTRATED THEIR HIGH SCHOOL’S COMPUTER SYSTEM FOR THE SAKE OF THEIR SAT SCORES:

Previous article
‘Louie’ Review: “Cop Story”
Next article
Get Your First Look at Jared Leto as The Joker