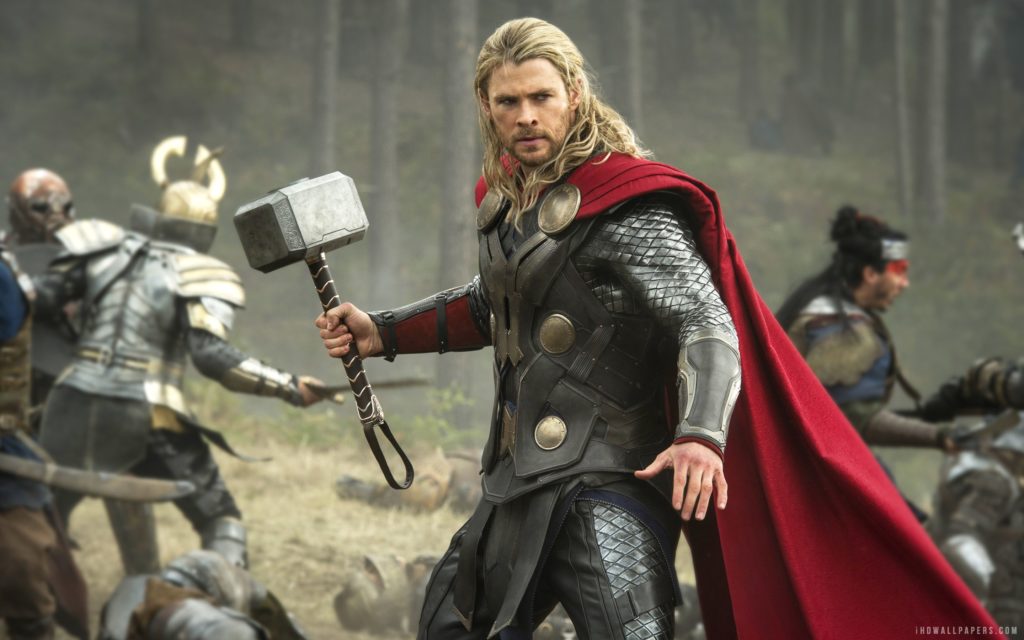 SO WHO IS THIS GOD OF THUNDER ANYWAY?

We first met the cinematic Thor back in 2011 in the form of Australia’s heart-melting megahunk Chris Hemsworth, but don’t let his winning smile fool you! Thor was initially portrayed as a cocky, selfish, warmonger who eagerly relished the opportunity to succeed his father, Odin, as the king of Asgard – the ethereal other dimension that Thor calls home. This arrogant behavior almost started a war with the Frost Giants, which made Odin strip Thor of his powers and banish him to Earth.

On Earth, Thor met a lovely scientist named Jane Foster whose research into worm holes became pretty much solidified once this brute of a man landed quite literally at her feet But her new subject of study became difficult when Agent Coulson and the men and women of S.H.I.E.L.D. came poking around for answers regarding the appearance of a magical hammer from another world. 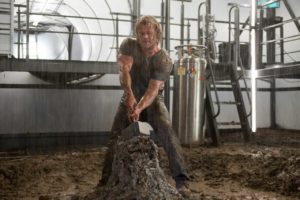 Back on Asgard, Thor’s slimy brother, Loki, found out he is actually only a half-brother when it was revealed to him that he was actually born a Frost Giant and merely taken in by Odin out of pity. This lead him to seize power in Asgard and set forth a plot to destroy his frozen homeland in hopes of earning enough of Odin’s respect to become the next king of Asgard. Luckily, Thor’s loyal friends Lady Sif and the Warriors Three headed to Earth to warn Thor and bring him back to stop Loki.

Loki is wise to this plan though and sends a powerful weapon known as The Destroyer to stop Thor and friends from ever getting off of Earth. And it is in this battle that Thor proves himself as a leader through self-sacrifice, which restored his powers and allowed him to not only defeat The Destroyer on Earth but also Loki back on Asgard.

SO THIS LOKI GUY IS PRETTY IMPORTANT TOO, HUH?

Oh yep! And if you thought he was dead when the end credits to Thor started to roll you’d be dead wrong. 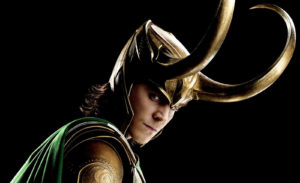 Not only did Loki survive but he made his way to Earth to obtain the all-powerful Tesseract, which he would use as a bargaining chip with the evil race of aliens known as the Chitauri who were more than happy to provide Loki with an army to take over the planet with.

To stop Loki’s evil plans, Thor returned to Earth and teamed up with Iron Man, Captain America, Hulk, Black Widow, Hawkeye, and the fine folks of S.H.I.E.L.D. to wage the epic Battle of New York that ended with Loki in chains and destined to spend the rest of his life in an Asgardian prison.

SO WAIT…THOR DIDN’T BOTHER VISITING JANE WHILE HE WAS BACK ON EARTH?!?!?

RUDE. HAS HE BEEN BACK SINCE THEN?

Of course. That’s what Thor: The Dark World was for!

After learning from the seer-of-all-things, Heimdal, that Jane had disappeared, Thor returned to Earth to find Jane fresh from visiting another world where she was infected with an ancient weapon known as the Aether, which awakened an ancient foe named Malekith from his imprisoned slumber.

Thor took Jane back to Asgard with him where Odin identified the Aether and claimed that it would take Jane’s life. But before they could do anything about it Malekith and his minions attacked Asgard with the hope of obtaining the Aether via Jane. Thor’s mother, Frigga, was killed during the battle while bravely trying to defend Jane but ultimately Malekith was forced to retreat without getting his hands on Jane.

Thor then ignored Odin’s orders to remain on Asgard in favor of taking Jane to a more barren realm where he could hopefully lure Malekith into a trap to defeat him. But to do that Thor required the aid of Loki who knows how to travel to different worlds without the aid of gatekeeper Heimdal. Loki agreed to this in hopes of avenging Frigga’s death and successfully escaped from Asgard with Thor and Jane thanks to the help of Lady Sif and the Warriors Three.

On the world of Svartalfheim, Malekith takes the bait of removing the Aether from Jane and is able to take it for himself when Thor failed to destroy it. To make matters worse, Loki was mortally wounded in the battle that followed and “died” with a hope that Thor would tell Odin of his sacrifice.

Thor and Jane then made their way to Earth where Malekith was attempting to unleash the Aether at a time when all Nine Realms of the universe converged for more convenient destruction. You gotta admire his attempt at efficiency…but Thor and friends managed to stop the process, kill Malekith, and reclaim the Aether before any catastrophic damage could be done.

Back in Asgard, Odin offered Thor the chance to finally take the throne as King of Asgard but he refused in favor of returning to Earth to be with Jane.

This seems all well and good until it was revealed that Odin is actually…LOKI IN DISGUISE!

SO WHAT’S NEXT IN AGE OF ULTRON?

Well, as far as we know Thor is still on Earth romancing Jane and will be available to join up with his fellow Avengers to battle Ultron and his robotic forces. What isn’t entirely clear though is how much this “Age of Ultron” will affect Thor or the realm of Asgard. Tom Hiddleston and Idris Elba are on record as being in the film as Loki and Heimdal respectively, but it is assumed that their appearances will be minor ones. 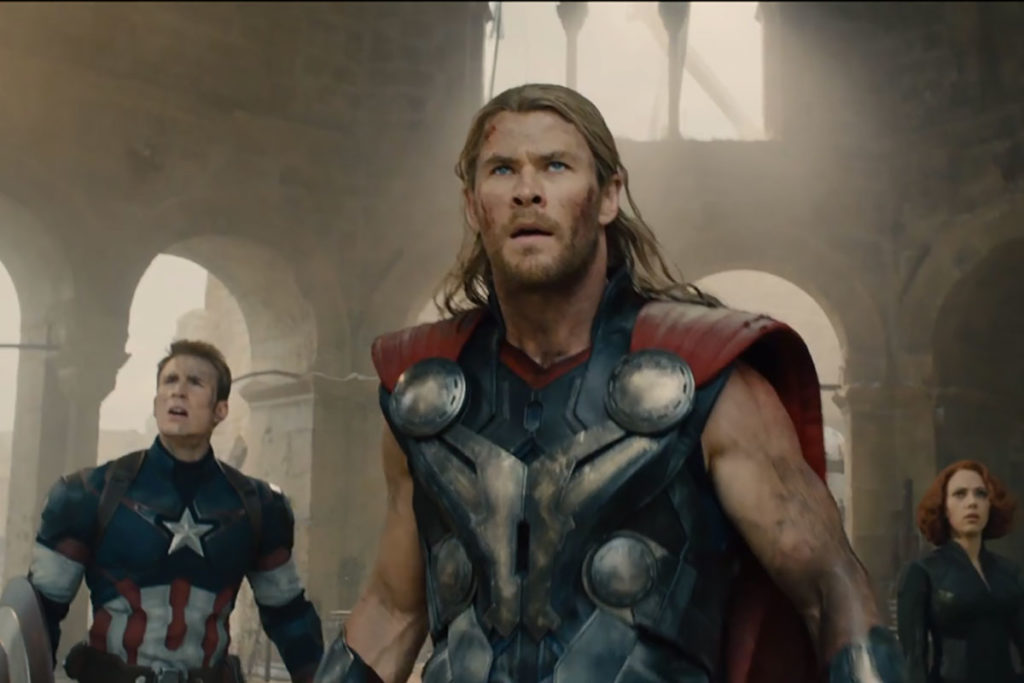 OK…SO IF THAT’S TRUE WHEN DOES THE STORY OF THOR SIGNIFICANTLY MOVE FORWARD?

Mark your calendars for November 3, 2017 because that is when we’ll get Thor: Ragnarok, which seems to imply that Thor survives the events of Age of Ultron and will be able to figure out what Loki is up to.

In the comics, the character of Ragnarok is half-clone/half-robot version of Thor created by Tony Stark during the Civil War, which is now known to be the focus of Captain America’s next solo film. And in classic Norse Mythology the word “ragnarok” is usually used to describe the end of the world sooooo….yeah. Things are about to get real crazy for Thor on the big screen.

Jane Foster: Object of Thor’s affection for two movies straight but an amazing scientist in her own right.

Loki: Thor’s conniving half-brother is easily one of the most cunning characters in the Marvel Cinematic Universe and seriously shouldn’t be trusted to do anything that he promises to do.

Heimdal: The guardian of Asgard who watches over the Nine Realms from his guard post at the end of the rainbow bridge. A true badass.

Odin: Strong and wise King of Asgard who might be a little old fashioned but can always be counted on for a hot dose of truth despite currently being occupied by Loki.

Lady Sif and the Warrors Three: These four warriors have been with Thor through the best of times and the worst of times and are always ready to come to his aid at a moment’s notice. Some people even wish Thor would just dump Jane already and get with Sif. He could definitely do worse!

Erik Selvig: Jane’s mentor and fellow scientist who played a big role in Loki’s machinations in The Avengers. As a result of this he’s a little screwy but still helpful in a pinch.

Darcy: Jane’s loveable assistant who still struggles to pronounce the word “Mjolnir.” Can you blame her?

WANT MORE THAN MOVIES TO SATE YOUR THOR NEEDS? CHECK OUT THESE COMICS:

BUT NEVER EVER FORGET HIS APPEARANCE IN ‘ADVENTURES IN BABYSITTING’ AS PLAYED BY DAREDEVIL’S KINGPIN (VINCENT D’ONOFRIO). IT’S IMPORTANT.