‘Game of Thrones’: “The House of Black and White” – Dragons, Dorne, and Death Lists

Is it just me or does the Game of Thrones intro get longer and longer each episode? I mean, I know we’ve added more cities than just King’s Landing, Winterfell, and The Wall, but two minutes? If they keep adding to it I may actually have to do something productive in that time. Like laundry or exercise or write in my journal. 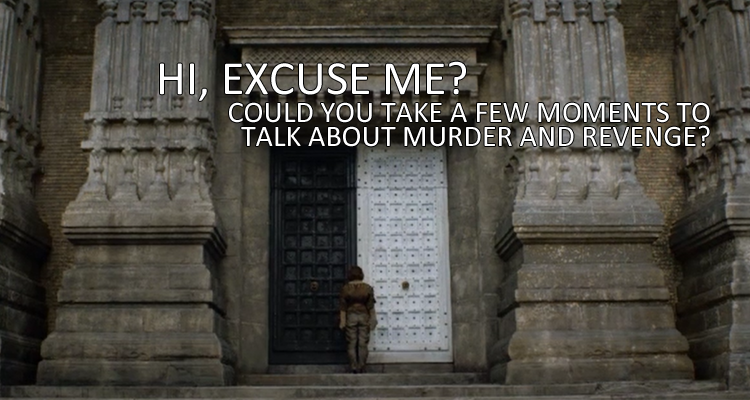 Arya’s face after that long introduction was well worth the wait, though. With an episode titled, “The House of Black and White,” I had hoped it would be a Baby Stark Girl affair, spreading the good word of murder and revenge, but I’m afraid I was I a bit let down in that department. I am also disappointed that Arya’s Kill Prayer has dwindled down to only four names. Arya, unfortunately, doesn’t get to do much in the way of stabbing, but by the end of the episode she does finally gain access to the fabled House of Black and White where she meets back up with homeboy himself, Jaqen H’ghar. He takes her inside to begin the Faceless Man training and if the film masterpiece Face/Off isn’t on the syllabus, it will be a travesty. 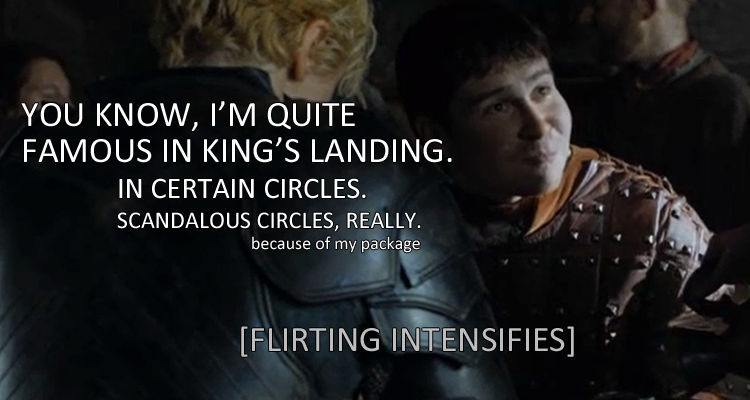 Brienne! Oh, hey girl! I was hoping this season wouldn’t skimp on the Good Knight/Bad Knight schtick that is Pod and Brienne, and it looks like I’ll get my wish. Both are loyal characters trying to do the right thing, only Brienne has grown tired of waiting for her nobility to pay off. Pod is utterly terrified of her wrath, especially when it comes to anything that might stand in the way of fulfilling her oath, be it Littlefinger, his guards, or a lack of horses. Thankfully, Brienne’s Scooby-Doo villain chase has come to an end and she finally gets to meet Sansa Stark.

Had Brienne found Sansa sooner, I have no doubt that she would have gone with the knight, but after spending (far too much) time with Littlefinger, Sansa has grown into a shrewd player and doesn’t see the benefit in hanging out with someone so moral as Brienne.  After looking over Brienne and reading between the lines of the dialogue with Littlefinger, Sansa decides idealism just isn’t for her and she spurns Brienne worse than Arya. Now the knight with the infallible loyalty has gone 0 for 2 with the Stark girls. (Just like her record as a sworn sword. Hey-o! ….And now I’m sad again.) However, Brienne has no intention of letting the eldest Stark slip away and she and Pod use their invisibility cloaks to follow her north.

In King’s Landing, Cersei is still reeling from the death of her father and now she’s forced to deal with the prospect of her daughter being held hostage in Dorne.

Jaime doesn’t seem nearly as worried as Cersei, but then again, as Cersei puts it, “You’ve never been much of a father to her.” Jaime then decides to go to Dorne to rescue his “niece” because at least in Dorne the burns don’t leave lasting scars on your heart. Because a one-handed man can’t perform a daring rescue all alone, Jaime enlists the help of Loyalty-For-Gold Bronn and so begins another escapade across Westeros with a pair fans adore.

(Seriously though, Jaime has lost a lot of his appeal over the last two seasons. No matter how good he looks in that red leather tunic, I’m finding it harder and harder to defend him.)

Speaking of Myrcella and snakes and such, we finally get our first glimpse of Dorne! So far, I’m loving the sets, but even more than that I’m loving the tension between Ellaria (Oberyn’s boo) and Prince Doran. Spoiler for book readers (highlight with cursor): She seems to be taking the place of Arianne Martell, no? While I’m still sad about the loss, I’m okay with this as long as there’s someone in Dorne challenging the Prince. Ellaria wants to make an example of Myrcella, sending the country into war as vengeance for Oberyn’s death and Doran lets his head prevail and tells her no matter how many Sand Snakes she has at her disposal, they will not fight King’s Landing. There was also a bit of a throwback to an earlier moment in the show when Myrcella is first sent to Dorne and I really enjoy these little connections between characters that despise each other. 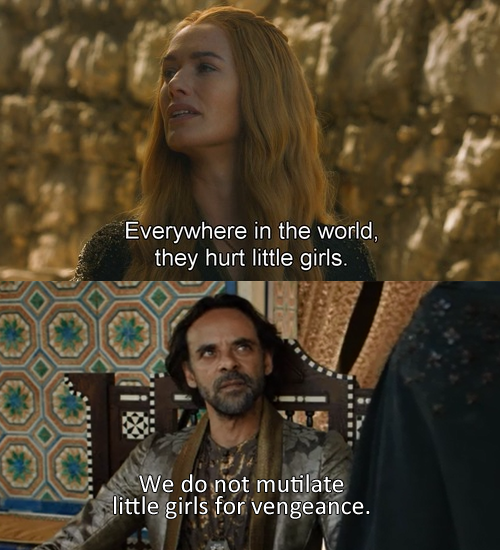 Let’s see, as far as traveling duos go we’ve covered Brienne & Pod, Sansa & Littlefinger, Jaime & Bronn…who’s left? Ah, right. Varys & Tyrion BFF’s 4 life. (By the way, I would not be sad in the slightest if Game of Thrones decided to make a spin-off detailing the many adventures of Varys and Tyrion.) Not much happens on the road to Meereen except we learn that for someone who enjoys being perpetually drunk, Tyrion is not a fan of sitting still. Varys has grown tired of his toddler antics and him to just STFU until they get there. Tyrion then questions the reason behind his new boxed-in existence and for a moment he seems to forget who Cersei is and claims she cannot possibly kill every dwarf to get to him.

Meanwhile, Cersei continues her war path across King’s Landing, making heavy-handed changes to the small council in an effort to control every facet of the kingdom, and doing so by speaking on King Tommen’s behalf. Tywin’s brother, Kevan Lannister, is no fool and sees Cersei’s actions for what they really are and claims to want no part of it.

Totally-not-foreshadowing Moment of the Week: Sam Tarly reads a bunch of old books, one of which details a Stark’s rise to become the youngest Lord Commander of the Night’s Watch. Later when all the crows have gathered to vote for the next Lord Commander, it is Sam who throws Jon’s name into the ring, reminding his brothers who they turned to when the night was darkest. It’s a stirring speech that gives Jon the position of honor, earning him even more respect from Stannis and Co. Fitting that both Jon Snow and Kit Harrington should grow as character and actor respectively; Jon as leader suits them well.

Still north of the Wall, there’s a character that doesn’t get as much recognition as she should: Shireen Baratheon. She’s a clever, but kind, little girl who takes to those who are broken the same as she. (Even if Gilly is annoying.) Besides, if the Varys & Tyrion spin-off show never comes to fruition, there’s always hope for a more educational Westeros program. 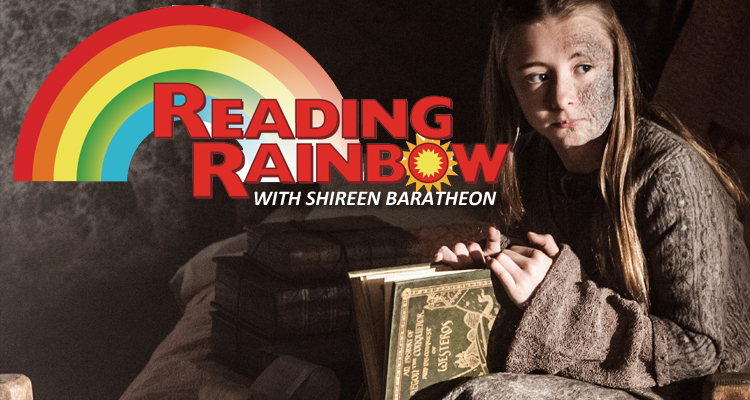 Across the Narrow Sea, Daario teaches Grey Wurm a few lessons about being corrupt and using fear to one’s advantage. I suspect it won’t be a teaching that Grey Wurm takes to heart. After, Daenerys finds herself at a crossroads; the Sons of the Harpy continue to terrorize the people, but thanks to the aforementioned pair, she acquires a Harpy to question, imprison, or execute. Barristan’s story time about her father the Mad King and diplomatic advice eventually wins out and Dany cannot kill the Harpy. However, Mossador–a former slave–cannot excuse the Harpy’s behavior and murders him in his cell. Dany has to decide to either let the act go and remain in the slaves’ good graces or risk more chaos for the sake of her morals. In the end, she cannot forgive murder and executes Mossador in front of the slaves and masters. Surprisingly, neither side takes the action too well and the people riot.

Things then take a lighter turn for the Mother of Dragons as Drogon returns home. That is, until he asks her for some money and she’s all, “I haven’t seen you in months! At least give me a hug first!” He stomps his feet, makes a snide remark about the city currently burning to the ground, and flies off, presumably to pout with Viserion and Rhaegal. 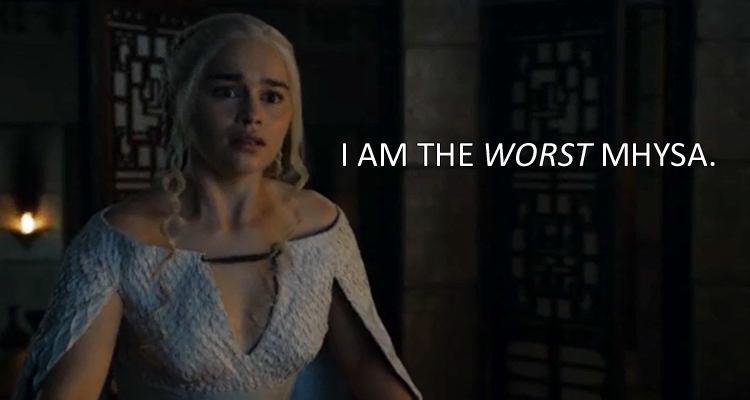 NOT PICTURED IN THIS EPISODE: