‘Archer’ Review – Save the Whales

Archer and Lana are finally together, but it hasn’t taken long for their honeymoon period to sour. The return of Katya and her robot vagina hasn’t been an easy situation to explain, and Archer instead opts for what he believes to be the best course of action: tranquilize Lana and fly her overnight in a CIA plane to a romantic getaway in Wales, where they may or may not be aiding some local Welsh separatists. “Achub Y Morfilod” (Welsh for “save the whales”) provides only a loose framework upon which to hang Archer and Lana’s fight, but the absurdity balances out the mostly serious, still hilarious lover’s quarrel. From the sillier-than-usual spy mission to the office drones giving Ray a new arm, it’s Archer at its most effortlessly irreverent.

This episode was a great showcase for Lana, who hasn’t received much screentime this season. She received some backstory in “The Kanes” and has had a more prominent role in the past couple of episodes, but we haven’t seen such sustained levels of rage and withering scorn all season. Aisha Tyler has been doing some amazing work; I could listen to her threaten Archer and goats in the bucolic Welsh cottage all day, and the venom dripping from her voice whenever she refers to Katya’s robot vagina will never stop being hilarious. 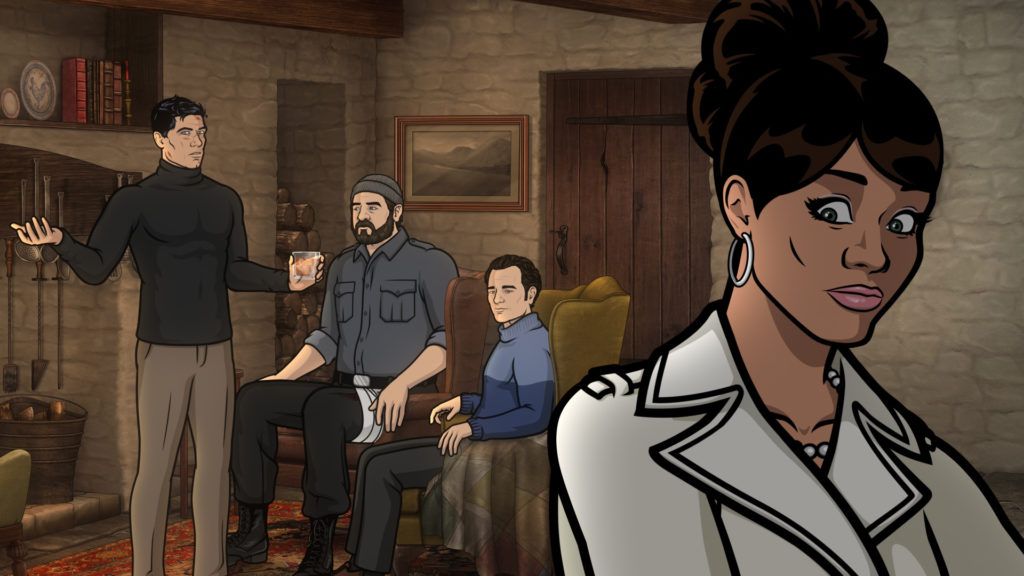 “Achub Y Morfilod” succeeds mostly because Archer and Lana are at their best when they’re fighting. Granted, there’s rarely a moment in the series where they aren’t at each other’s throat, but I’m glad to see that their rekindled relationship hasn’t altered this fundamental dynamic too much. Generally the voice of reason and most professional character, Lana spends the episode seething with rage at Archer and the ridiculous mission set before them. Though largely just a backdrop for their bickering, the mission involves aiding Welsh separatist Lloyd Llewellyn (Matthew Rhys) and his hulking but mentally slow brother Davith. Between the Of Mice and Men dynamic and their delusional opposition to English rule (after the English government relocated a small village of 48 people to construct a reservoir), Lloyd and Davith add just the right amount of absurdity to make Lana even angrier. In typical fashion, Archer and Lana’s bickering ultimately blows their cover and ruins the mission

As for the others, Malory gets only slightly more screentime this episode and she’s still concerned about how fat AJ has gotten (“Mother, she’s a goddamn baby!”), while the office drones are in the operating room giving Ray a new hand. There’s a relentless flurry of hand puns and a long discussion about African-American characters on M.A.S.H. (for some reason…), but it looks like Ray is mostly back to his old self. It’s less of a subplot than a long series of jokes, but it fits well into the particularly farcical tone of the episode. Archer makes a smart decision by taking itself less seriously than usual–somehow, the more frivolous moments in “Achub Y Morfilod” manage to make a fight about an ex-lover actually seem fun.