Some of Archer’s best episodes involve the entire group stuck in one place or working together towards a common goal. They each have their own unique neuroses and idiosyncrasies, and together they form a hilarious symphony of dysfunction. Although “Vision Quest” saw the entire cast trapped in an elevator, “Pocket Listing” is the first episode this season to feature everyone (except for Malory) on a mission together. Fahad Fawaz, the crown prince of Durhan, has accepted an internship on Wall Street and must find a suitable residence. Slater orchestrates an elaborate plan to steal his electronic and biometric data during a tour of the Tunt mansion, with the entire team helping to distract the crown prince, his mother, and their legion of body guards. It’s a fun episode where everyone does their part to completely ruin the mission, and perhaps most significantly, finally sees Archer and Lana kicking off another fling.

The complicated, baggage-filled minefield that is Archer and Lana’s relationship isn’t easy to navigate. The two being together again was inevitable–the introduction of wee baby AJ drew them unavoidably closer, even as they tried to resist and maintain clear boundaries. So it was never so much “will they, won’t they” as “when will they, and how”. It seemed a little odd for the tipping point to be after Archer and Lana attempt to make the other jealous by sleeping with the the queen and the crown prince (respectively); I thought for sure that baby Abbiejean would have some role in the eventual catharsis and reunion. Still, that doesn’t mean the moment isn’t forthcoming–this happened in the spur of the moment, and neither character seems keen on confronting the larger implications just yet. 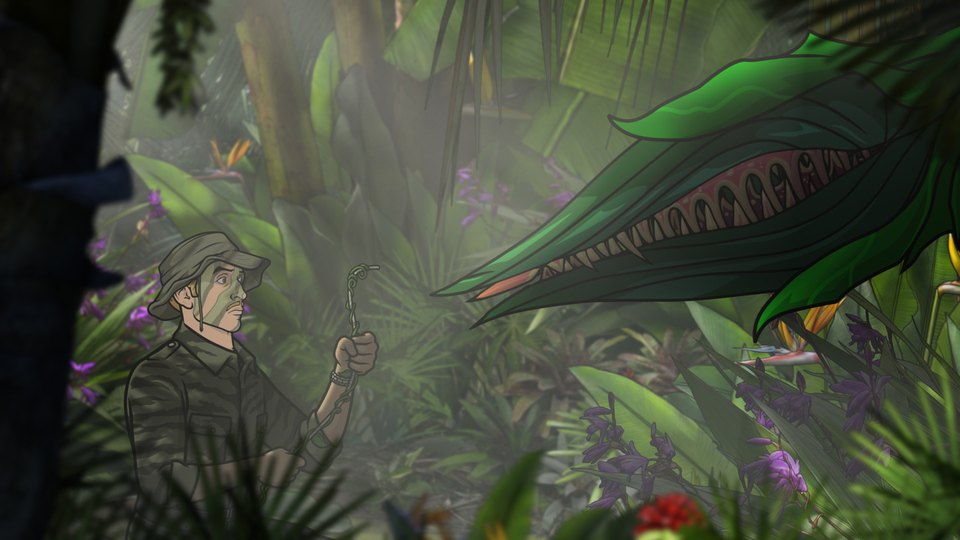 That aside, the episode was a lot of fun–everyone had something to do, and it’s great to see them all fumbling towards a common goal. Cheryl revels in her role as the listing agent for her own home, and the tour she gives provides amusing glimpses into the Tunt family history. Cyril, meanwhile, is trying to sleep with Lana again, but all his attempts to exploit Lana or Archer’s jealousy backfire hilariously. Ray of course performs his job admirably, only to be stranded in the conservatory with a large, “Audrey 2”-esque carnivorous plant who takes his hand in the ensuing life-or-death struggle. And Krieger’s mere presence on screen makes the episode better, despite him being tranquilized for most of it.

Archer’s realization that Pam is his best friend is one of the episode’s best moments. Her joy and excitement over his admission is incredibly sweet (“You’re my best friend!”), even after Archer asks about Cheryl (“You’re my second best friend!”) and the fact that she’s ultimately a little disappointed at the revelation (“I thought by now I’d be doing a little better in the old friend department”). Archer and Pam are perhaps the show’s strongest friendship–they’re the only two characters who seem to genuinely enjoy each others’ company most of the time, and they have a great chemistry together.

Slater’s elaborate plan fails spectacularly, of course. In many ways, “Pocket Listing” is about as classic as Archer gets: a dangerous mission that goes completely off the rails, some drama between Archer and Lana, shenanigans from just about everyone, and Ray ends up losing a hand.

@theworkprint
Follow
Previous articleInterview with a Fanboy’s Champion: A Chat with Adi Shankar, Producer of ‘Power/Rangers’
Next articlePhotographic Proof that ‘Supergirl’ is Definitely Happening