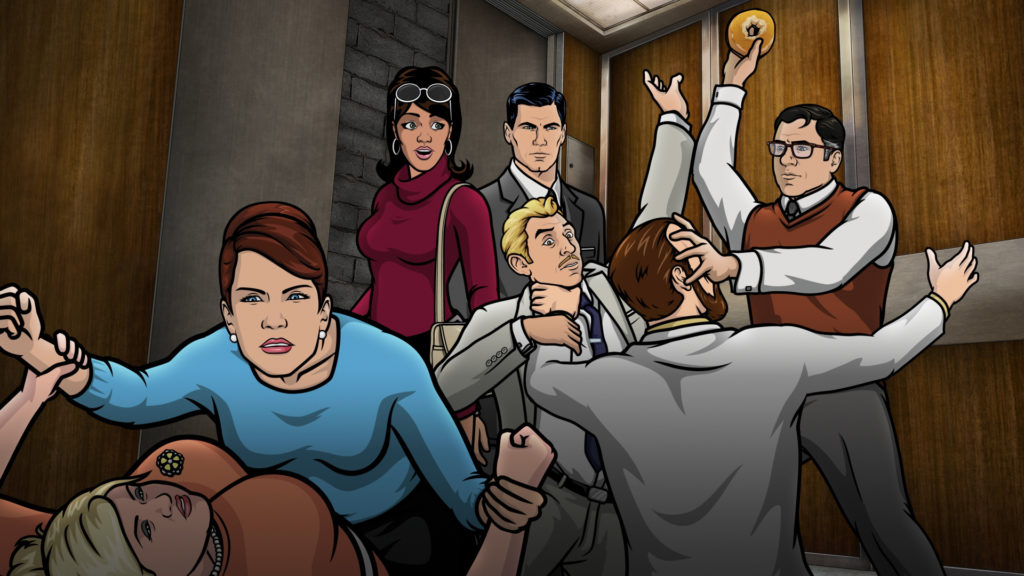 Bottle episodes, traditionally minimalistic episodes that take place in a single setting, serve a very practical purpose by saving production time and costs that would otherwise be spent on things like having multiple sets or elaborate props. But they also serve as a good litmus test for the strength of a show’s characters and how well they fare without any external impetus. For a lot of dramas, this usually means some intense character development via sobering introspection or honest confrontations. But for comedies, it’s mostly an opportunity for a manic display of all its characters’ hilarious dysfunctions. Archer has had its share of bottle episodes before, but takes the concept to its logical extreme by trapping the entire cast (minus Malory) within the narrow confines of the malfunctioning office elevator.

Stranded on the elevator on a way to a mandatory early morning meeting called by Malory, there isn’t much hope for reaching help–Krieger installed an RF jammer on the roof of the elevator (“so people would quit staring at their phones and talk to each other”), and Milton the toaster robot just returns with a supply cart full of toast. As their patience for each other wears thin, the situation naturally descends into chaos before Malory finally arrives and manually resets the elevator. 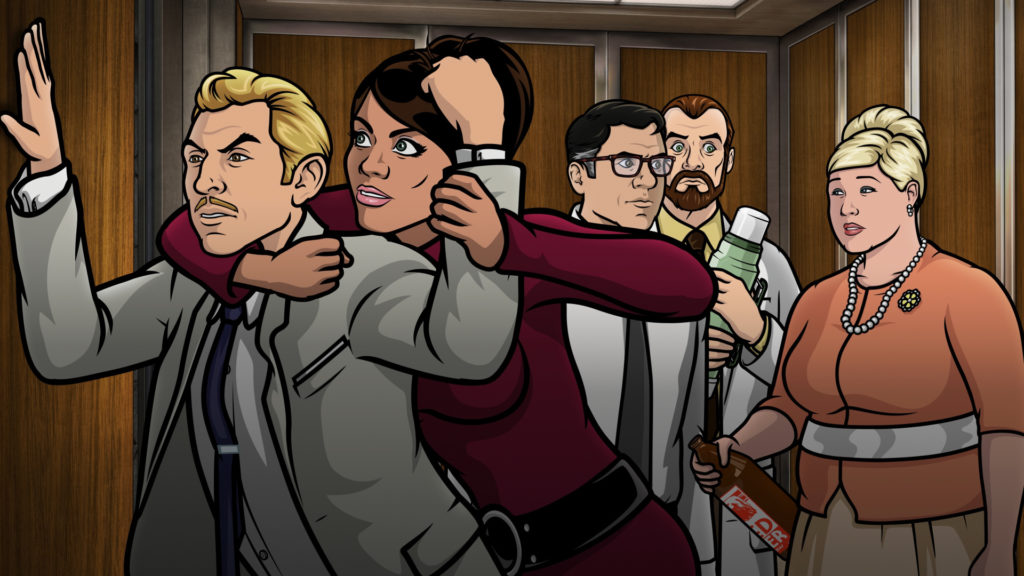 Some might take issue with the lack of any spy action or character development, but a lot of great moments have come out of Archer as a simple office comedy. The mundanity of this episode shouldn’t be mistaken for laziness or complacency–what ensues is a dizzying display of rapid fire jokes and non-stop banter. What makes Archer’s writing and voice acting all the more impressive, though, is the fact that all the voice actors record their lines separately. One could hardly tell, by the way the actors seem to effortlessly trade jabs and deliver pitch-perfect reactions.

What I particularly enjoyed about this episode was the way the group dynamics were constantly shifting. Archer, Lana, Ray, Cyril, Pam, Cheryl and Krieger all take turns ganging up on each other in various combinations throughout their ordeal, and each takes a turn being singled out by the entire group. One moment Archer, Ray, and Cyril are laughing at Lana’s monstrous hands, and in the next we have Archer pointing out the obvious power dynamics of the group when the issue of food rationing comes up: “The strong, like me, you, and Pam, who will naturally prey on the weak.” And lest you think that it’s all caustic hostility, the group manages to share some pleasant moments as well. The ladies end up complimenting Cyril’s sweater vests, much to Archer’s chagrin, and even Archer treats his vest more respectfully when he learns what it’s made of (“It’s cashmere, Lana. There are rules. Cyril, seriously, I’m sorry; I didn’t know.”). But by and large, most of the camaraderie is found in ostracizing each member of the group on a rotating basis.

Bottle episodes can be pretty challenging to get right, but Archer pulls it off effortlessly. Despite being a bit of a throwaway episode, the strength the writing and voice acting make for a perfect distillation of everything there is to love about the characters and their whirlwind of dysfunction.