Archer’s comfort zone is the Danger Zone; he’s at his best in shootouts and car chases, and laughs in the face of avalanches and cyborgs. This season seems to have been a lot more self aware and indulgent with Archer’s reckless impunity of late, but “The Kanes” balances all of that out by placing him firmly outside of his element. Lana and Archer bring baby Abbiejean to visit her parents and it soon becomes apparent that everyone is in way over their heads.

Lana’s father Lemuel (voiced by Keith David) is a prominent microbiologist, while her mother Claudette (CCH Pounder) is a professor of public policy with a focus on feminist issues. More importantly, neither of them know that Lana is a spy; they believe she’s still working on her PhD in environmental science. The familiar “meet the parents” premise was doomed from the start, as Archer learns that they had already met once in the past when he was blackout drunk (“… Did they find me utterly charming?”). Things go downhill from there.

Watching Archer squirm under the patient but disapproving gaze of Lana’s parents is pretty great. It goes without saying that Archer’s a bit of an ass, and he approaches nearly everything with a mix of supreme confidence and casual indifference. Seeing him both struggle in an uncomfortable situation and putting forth a genuine effort is surprisingly uncommon for the series, and lends “The Kanes” a refreshingly different tone. It’s also humanizing and endearing for Archer, whose raging id of a character is often in danger of becoming too ungrounded. Out of his element and out of his league, all of his efforts to ingratiate himself to the Kanes land hilariously flat. Archer digs himself deeper and deeper until he finally strikes bedrock by misinterpreting a free-spirited nude hot tub conversation with Lana’s parents as an invitation for a ménage à trois. 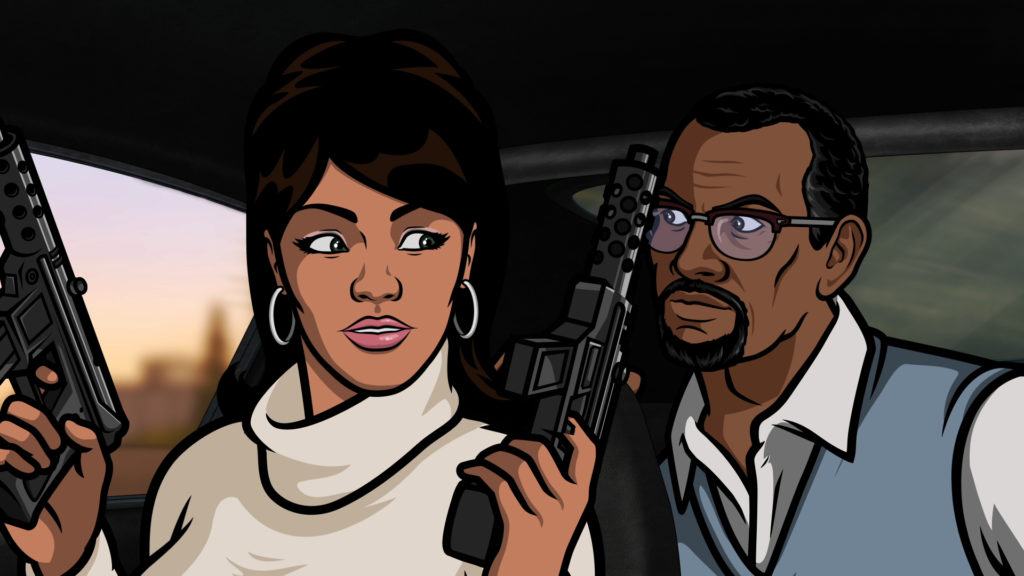 There isn’t much time to dwell on Archer’s faux pas, however, as Lemuel’s prized research on algae as a biofuel is stolen from his study. As the thieves speed off, Archer, Lana, and Lem give chase in his green 1968 mustang. Yes, it’s the car from Bullitt and yes, the thieves are driving a black charger. Archer pays homage to the classic car chase while Lana has to explain the truth of their professions to her father. As is typical of the show, there’s some great animated action and a convenient vehicle to hash out some character conflicts.

Unfortunately, the B plot once again feels like a bit of an uneventful diversion. Pam, Krieger, Cyril, Carol, and Krieger’s virtual girlfriend are on their way to league night at the bowling alley when Krieger’s van runs out of gas, stranding them in a rough part of town. In total, it amounts to a mere 3-4 minutes of screen time, which is plenty of time to fit in some amusing banter from the group, but not nearly enough to feel like a properly fleshed out story. Balancing the various plots of each episode is a recurring issue for the series, whose tight scripting and editing already make for some pretty crowded episodes.

The chase ultimately comes to an end when the thieves turn out to be Slater and his team, who are confiscating Dr. Kane’s research in the name of national security. Lemuel is compensated handsomely for his life’s work, and Archer gets an invitation to the annual Kane family reunion. The episode ends on a touching moment for Lana and Archer, whose absurd and complicated relationship serves as one of the show’s greatest strengths. Lana apologizes for not considering Archer family and hurting his feelings, and lest the moment risk becoming too treacly, the best Archer can muster is “Sorry I tried to spit roast your mom.”