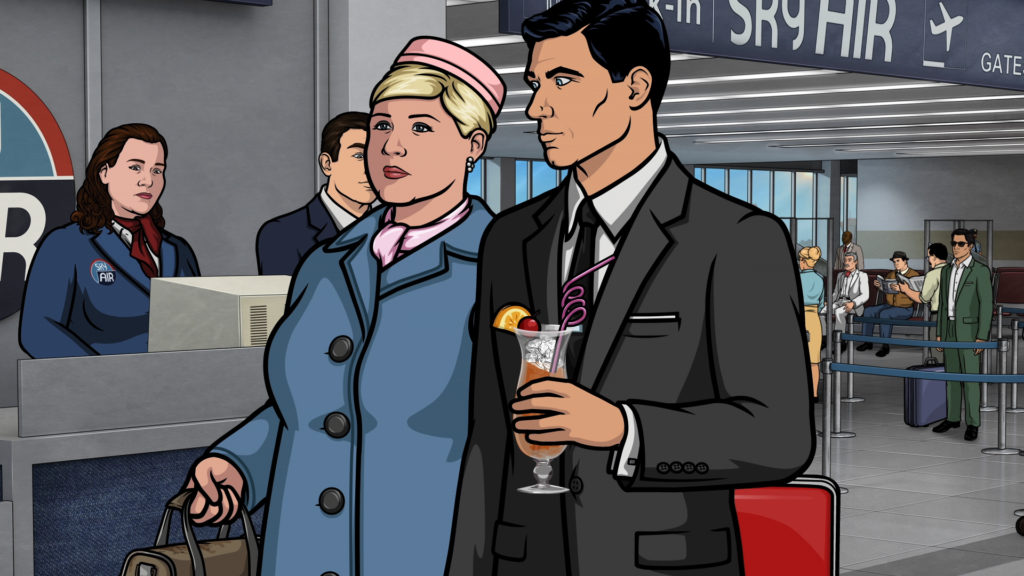 I’ve mentioned before that Archer’s essentially invincible, and therefore never really has any reason to take himself or any situation too seriously. There’s plenty of self-aware humor to mined from that, but the tension suffers because the stakes are basically non-existent. “Edie’s Wedding” takes care of that problem by bringing back Barry Dylan (voiced by Dave Willis), former ODIN agent turned Six Million Dollar archenemy, who follows Archer to Wisconsin for the wedding of Pam’s foul-mouthed sister Edie (Allison Tolman). Old wounds are reopened as Pam prepares to face her torturous sister and Archer his cyborg nemesis in a thrilling and hilarious showdown.

A vengeance-seeking cyborg is a natural escalation of the “tangible threats” arms race against Archer’s invulnerability, but while Barry poses a greater danger than any regular spy mission could, the two still tend to reach a sort of stalemate. To borrow an analogy from The Dark Knight, Barry is the unstoppable force to Archer’s immovable object. The show has worked around this narrative inconvenience in the past by stranding Barry on a space station or having him under the thumb of the more assertive Katya (Archer’s ex-wife turned cyborg head of the KGB). Still, Barry’s machinations are unleashed sparingly enough that his return feels appropriately threatening, and Dave Willis’s brilliant voice acting is spot on; he nails Barry’s smug wit and casual menace that always teeters on the edge of madness.

Another way to get around the issue of Archer’s invincibility is to put other characters in harm’s way. This time, Pam gets abducted by Barry while in Minnesota for Edie’s wedding. Allison Tolman, perhaps best known for her role on the television series Fargo, puts that same Minnesota accent to good use here as Pam’s cruel, bullying sibling. Edie amounts to a more exaggerated and meaner version of Pam (if you could imagine such a thing), but their caustic relationship is surprisingly believable. Crucially, it helps expose more of Pam’s emotional vulnerability, something that was sorely lacking during her coke-fueled hulk rampages last season. There’s no hint of sympathy or reconciliation here; Pam spends much of the episode vacillating between tears and anger. Even after Pam is knocked out and kidnapped by Barry, Archer in turn has to knock out Edie to force her into the rescue attempt (she’d rather not miss the all-you-can-eat prime rib at the rehearsal dinner). The only thing resembling closure that Pam achieves is having completely ruined Edie’s life in return (by making her miss the rehearsal dinner, which then causes her fiance to cheat on her with the maid of honor).

Barry’s single-minded quest to destroy Archer is understandable–Archer basically ruined his entire life at every passing encounter. What’s been the most interesting about his character, though, is his gradual descent into madness. Having been turned into a cyborg, had his likely-mechanized heart broken, and trapped alone in outer space isn’t easy on his psyche, but the show has been methodically dialing up his insanity in a way that most television dramas (let alone comedies) haven’t been able to get right. What used to be amusing idiosyncrasies (his lame jokes, his propensity to hold conversations with himself) that colored his contempt have now taken on a much more sinister tone, and the threat he poses only grows as he becomes more unhinged. As Pam notes, he’s basically just bug nuts crazy at this point, but his arc over the entire series is actually one of the better depictions of a villain that I’ve seen anywhere.

The character development of most villains stop when they become bad, and then they get killed in the face off with the hero. If they happen to survive, they come back with nothing more than a scar and a slightly different plan. Barry Dylan, on the other hand, is actually driven insane and becomes worse. Even as his smoldering exoskeleton lies broken in the aftermath of the grain elevator explosion, he can’t help but amuse himself with the Eye Lights Out trope, only to come back cackling like a maniac at his own joke. He’s completely off the deep end now, and he’s never been better.

@theworkprint
Follow
Previous articleThe Ballad of Ron and Leslie: A Friendship We All Need
Next article‘Game of Thrones’ Season 5 Trailer: Who Said Anything About Him?