‘The Last Man On Earth’ Review

The Last Man On Earth is perhaps one of the most grounded and unique depictions of the post-apocalypse ever put to screen. Sure, we all have our fantasies of being the tough, resourceful survivors on The Walking Dead, but if we’re truly being honest with ourselves, most of us would be more like Phil Miller (creator, executive producer, and star Will Forte). He’s just a regular guy, and as far as Phil can tell, he’s the only one left on Earth. Created by Forte along with executive producers Phil Lord and Chris Miller (the duo behind the recent Jump Street movies and The Lego Movie), the series is first and foremost a comedy, but nevertheless provides an often tragically honest depiction of the last hope for civilization left to his own devices, without direction or purpose.

After searching the entire country without finding anyone, Phil leaves signs directing survivors to his hometown of Tucson. Phil isn’t really sure what to do with himself; there are no zombies or monsters to fight off, nor any scarce resources to struggle over. Initially, Phil revels in his newfound freedom. The early scenes are a comic display of self-indulgence, from the various souvenirs that fill his mansion from his journey around the country (mostly fine art and rare sports and film memorabilia) to all the ways he finds to amuse himself (bowling with aquariums, blowing up cars with flares and propane tanks). In one particularly self aware scene, he watches and heckles the film Castaway, vowing that he would never talk to a volleyball. It’s a painfully obvious set up, but one for which the over-the-top payoff is hilarious nonetheless. 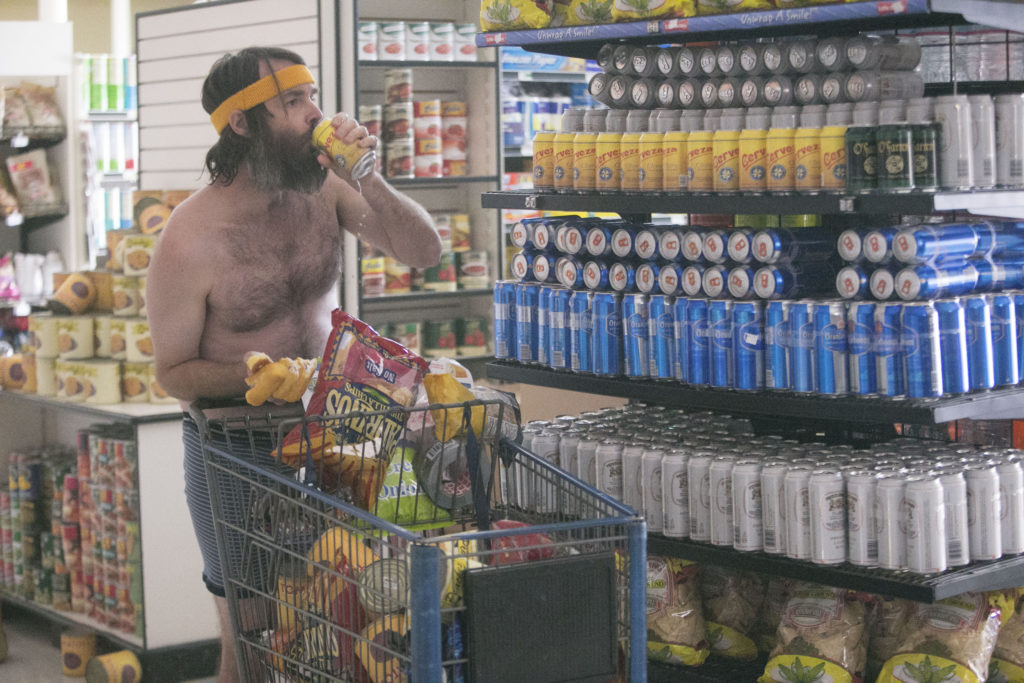 It isn’t long before the ennui and isolation start to weigh on him, however. The mansion he has taken up residence in has become a complete mess, as has Phil himself. He spends his days constructing a massive Jenga tower and bathing in / drinking out of a kiddie pool filled with margarita. When his toilet becomes inaccessible due to the garbage accumulating around it, he merely cuts a hole in the swimming pool’s diving board. He also makes regular visits to Rozco’s Mexi-Irish Pub, his local watering hole that has become completely filled with dozens of sports balls (and a badminton birdie) with faces scribbled on them. Fans of Forte or Lord and Miller’s previous work will be familiar with the absurd comedy on display here. Anything worth doing is worth doing to excess, and Forte has a masterful sense for when to pull back and when to take a gag to its lunatic extreme.

As amusing as all of Phil’s existential putzing around can be, it’s ultimately unsustainable. Forte lends a lot of poignancy to the character as he slips further into despair, but even at its darkest, the show punctuates the gloom with plenty of tragic humor. Alone and completely unhinged, he finds himself suddenly confronted with a glimmer of hope in the middle of the Arizona desert. I won’t provide spoilers here, even though most could probably guess what happens. It brings up a whole different set of challenges for Phil, and propels him down the path towards salvaging what’s left of human civilization. It’s an occasionally dark, mostly hilarious start to one of the television’s most unique and interesting premises.