Six seasons in, Archer has settled pretty comfortably into a formula. The premises of most episodes are plucked straight from classic spy, action, and science fiction genres and filtered through the show’s insane characters and sharp writing. It’s a consistent and reliable formula, but it can be challenging for any particular episode to stand out based on its premise alone. “Drastic Voyage: Part 1” takes the plot from the 1966 film Fantastic Voyage, but even the entire cast being miniaturized and injected into a comatose scientist’s body is only slightly stranger than usual (after all, this season also contained aliens). As the first half of a two part finale, “Drastic Voyage: Part 1” necessarily contains a lot of set up and doesn’t offer too much on its own, but the tried and true formula of cramming everyone into close quarters on a mission should still hold up pretty well for next week’s season ender.

Special Agent Hawley (Gary Cole) returns with a special assignment for Malory’s office: Dr. Zoltan Kovacs has been developing a process for molecular miniaturization (“Aren’t they already pretty small?”), but he’s left in a coma after an attempted kidnapping, and now it’s up to Archer and the others to enter the doctor’s brain using his own technology and destroy the blood clot before it kills him. Joining them on their fantastic voyage is Dr. Sklodowska (Carrie Brownstein), Dr. Kovacs’ assistant and lover. The entire cast is involved in the mission in one way or another: Krieger doesn’t get miniaturized but is instead supporting the surgical team, while Ray and Cyril pilot the vehicle, and Pam and Cheryl are also aboard because they “always stow away somehow”. Malory isn’t on the mission unfortunately, but at least she’s with mission control and somewhat closer to the action this time.

The stakes are a bit higher, as well–along with the inherent dangers of the mission, failure will result in everyone getting blacklisted from espionage work. Hawley correctly points out that they’ve ruined nearly every mission the CIA has assigned them, and it’s good to finally see some real consequences in a season that seemed particularly dismissive of them, even if everything will almost certainly turn out fine. Along similar lines, Lana finds herself much more nervous about the mission now that she has AJ in her life, while Archer remains as cavalier as ever. Though it should go without saying at this point, Lana asks Archer whether he’s even capable of grasping the concept of his own mortality, to which he simply replies: “Lana, nobody can.” 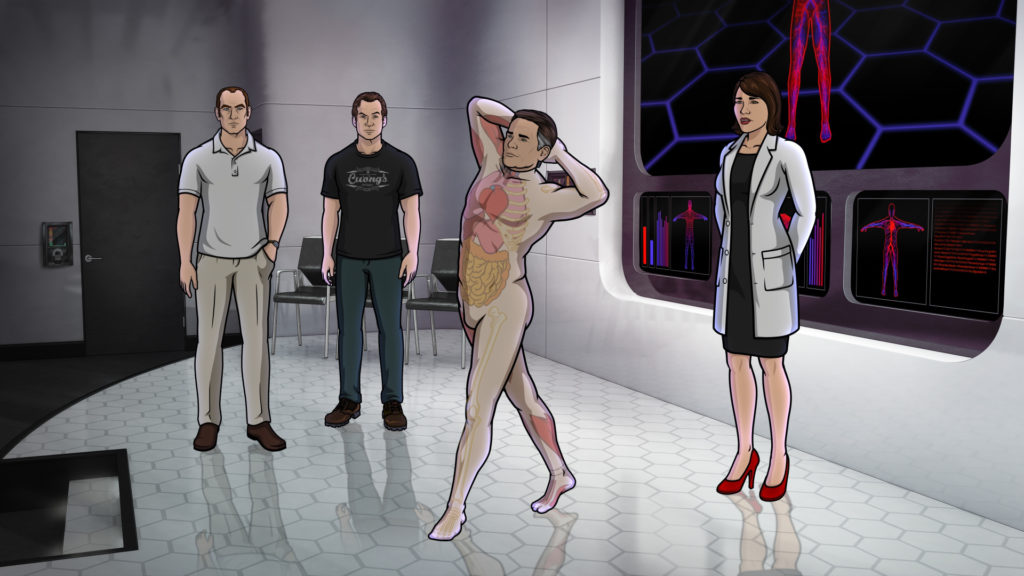 The humor is more scattered and inconsistent than usual; Archer continually antagonizing everyone around him (particularly Slater) is great as always, but other jokes fell a little flat. Ray’s new hand is black and there are plenty of jokes at his expense, but overall his newfound indignation doesn’t quite reach the levels of comic absurdity that Robert Downey Jr’s character in Tropic Thunder does. Pam and Cheryl’s moments feel more superfluous than usual since they’re explicitly included but aren’t given anything to do, which defuses much of their usual mischief (though I’m sure they’ll get into plenty of trouble in part two). Finally, a brief and unexpected cameo by TV’s Michael Gray in a Slim Goodbody-esque body suit likely won’t have much of an impact unless you grew up during the seventies.

Successfully miniaturized, the team only has sixty minutes to find the blood clot in his brain, destroy it, and escape before the process is reversed. Unfortunately, Krieger chooses an inopportune time to stand up for himself, and his disruption causes the ship to be injected into Dr. Kovacs’ leg instead of his brain. It’s Fantastic Voyage through and through, which begs the question: is there a saboteur in their midst? “Drastic Voyage: Part 1” unfortunately doesn’t stand very well on its own, but all the pieces are in place for a fun and exciting season finale.

Previous article
Bones Review: They’re Back! Sweets Isn’t.
Next article
Thoughts from Ted Mosby’s Son on ‘How I Met Your Mother’ Finale One Year Later