It seems like it’s been forever since Bones has been part of our Thursday nights. They took an extended break over the holidays and then some, but tonight the whole crew–plus a couple of special (cheesy) appearances–returned to our homes.

Bones is in its 10th season and has already been renewed for an 11th, so chances are that if you (like me) are still watching it’s because you’re a fan. A LOYAL fan, because whoo-boy were there some horrible whole seasons in the middle of this run. Lucky for us, they’ve come out the other side.

That said, even though I’ve been enjoying Season 10 very much, this return episode came off a little maudlin, the emotions cheap and phoned in, gathered based on our love of a departed character and not because of any inspired writing or performances.

At first, I thought the fact that the episode began in the lab instead of focused on some poor civilian about to stumble upon the ickiest thing they can imagine meant that we were going to be spared the weekly gross-out but that, of course, was wishful thinking. A man found a woman’s body inside a tree he was cutting down–a woman they soon identify as a psychic.

Not a real one, like Avalon (who yes, makes an appearance in the episode) but a charlatan. Her career choice has driven a wedge between her and her religious father, she had not one, but at least two lesbian relationships and the charlatan psychic who taught her how to swindle people was pissed when she struck out on her own with some of his clients. 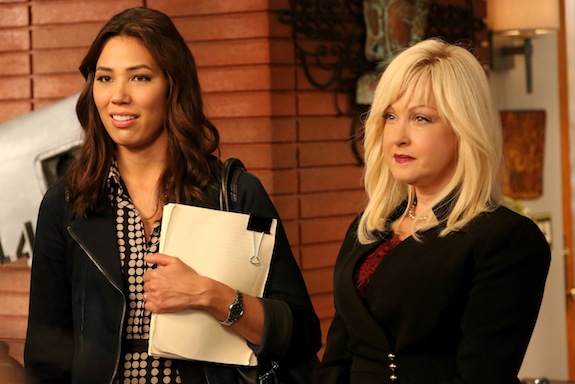 The girl had enemies, suffice to say. and I guess if any of us got bumped off unexpectedly we’d all have people come out of the woodwork with alibis to spare.

While Booth, Bones, and the other Squinterns track down the killer, Avalon (Cyndi Lauper) shows up to offer her services. At first, she thinks she’s there to help with the case about the psychic but she soon realizes that the person trying to connect from the other side is Sweets (John Francis Daley).

It’s Sweets’s birthday, you see, and Booth (David Boreanaz) realized it that morning because he was supposed to bring some special kind of donut. That made Brennan sad so she brought it up at work and so then Hodgins (TJ Thyne) and Angela were sad too.

Everyone was very, very sad. When Avalon brought up Sweets, Hodgins–who definitely thinks psychics are full of baloney–told her not to talk about his friend!

Does it sound to anyone else as though I’m describing the plot of a children’s book, here? Because that’s kind of how I felt watching it.

At any rate, our guys solve the case and Avalon finally figures out what Sweets wanted. He had a thumb drive in the car that Daisy is getting ready to sell. It turns out to be a book (a romance novel) that he wrote based on his research and sessions with Booth and Brennan over the years–discovered just moments after Christine randomly asks her parents to tell her a love story.

There was a small storyline with relatively new Squintern Rodolfo Fuentes (Ignacio Serricchio) in which he’s caught with medicines he intends to smuggle out of the US and back to Cuba, where they’re needed. Cam (Tamara Taylor) is all set to fire him before Brennan (Emily Deschanel) steps in. She informs them all that she had one of Booth’s friends at the CIA take the medicine and get it to Cuba, and if Cam fires Rodolfo then she’ll have to fire Bones, too. That’s pretty much the end of that conversation, and I loved how Brennan stepped up and did what needed to be done, since Cam’s character remains incapable of bending even the slightest rule.

The episode wasn’t terrible, by any means, but despite the inclusion of Sweets’s memory there wasn’t anything special about it, either. Like I said, the emotion seems dependent on our feelings for Sweets as opposed to being earned by a great script, and that’s the slightest bit disappointing since we waited so long for this episode. Even the moment between Angela and Hodgins (in which Michaela Conlin was REALLY trying), where she uses science and research to force him to admit that he can’t definitively say there’s no such thing as spirits and mediums, fell more than a little flat, for me.

Hopefully they’ll be back on their game next week! Regardless of one lackluster episode, I couldn’t be happier that the team at the Jeffersonian is back for the duration.