Archer’s humor is often detached from whatever is currently going on in the show; it usually doesn’t matter where the characters are or what they’re doing because they’re often too self-obsessed to notice anyway. The writing is strong and funny enough to pull this off fairly consistently, but it often runs the risk of feeling too aloof. The less plot-relevant episodes can sometimes seem more like contrived premises tailored towards isolating different combinations of characters rather than anything resembling an actual storyline, and offers only a slightly different echo chamber for the characters’ caustic banter to rattle around within.

In “Nellis,” for example, Archer desperately needs a ride back to New York after another bender, and the office drones offer to pick him up in Cheryl’s private jet on their way to Branson, Missouri. The group’s obsession (Pam and Krieger’s in particular) with Area 51 pressures Ray to pilot the Sky Tunt a little too close restricted airspace, and they are forced to make an emergency landing at the Nellis Air Force Base. While it’s always nice to see Pam, Carol, Ray, Cyril, and Krieger out of the office, and particularly great to see them hanging out with Archer, the episode doesn’t offer much that could beat another poker night. Moreover, once they weasel their way out of danger (Archer impersonates Agent Slater and uses his Q clearance), Archer has to chase after Pam and Krieger while Ray, Cheryl, and Cyril are left sitting in the base’s officer’s lounge. 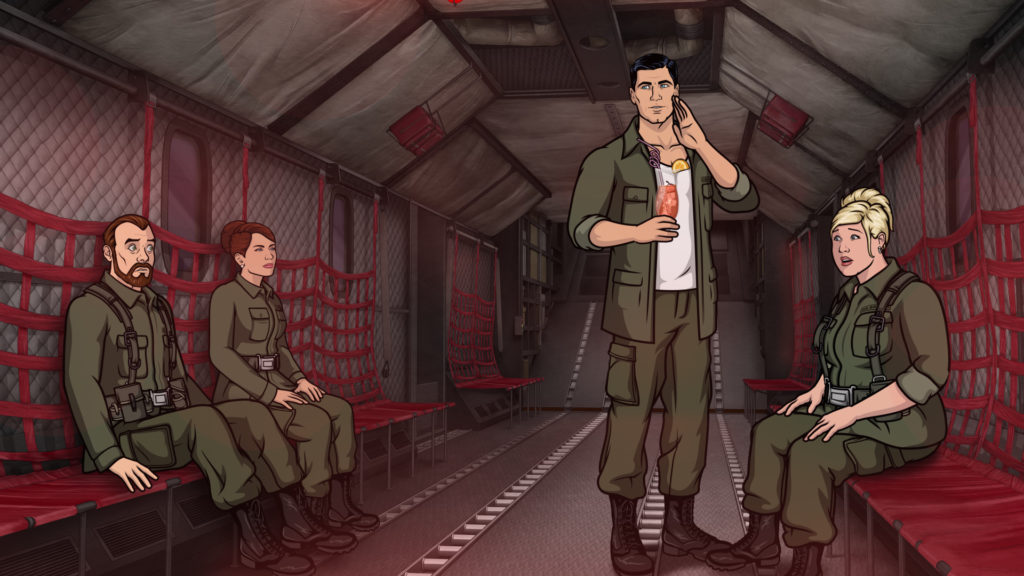 Sure, Pam and Krieger see some aliens and Archer beats some guards up, but a great start to the episode soon loses the wonderful chemistry of its core characters after they head in different directions. Also in the mix is the short aside of Malory trying to convince and ultimately bribe Lana into renaming baby AJ after her, which although amusing, only serves to crowd the episode more. The best tangent here is Pam and Krieger’s quest to find the aliens, since it’s a pairing we don’t get to see much of. Archer mostly just finds ways to amuse himself during whatever he’s doing, but Cyril, Ray, and Carol get the short end of the stick by being stuck in the officer’s lounge with little to do and not much to talk about for most of the episode.

One thing we’ve seen more of from Archer is skipping over relevant story beats. In “Nellis,” we cut from the group stealing a number of officers’ uniforms straight to them relaxing in the successfully commandeered airplane. It works well when employed strategically, but only serves to further undermine the gravity of any given situation. The group will of course be fine, and showing the actual escape would therefore be mostly obligatory, but it seems like a bit of a missed opportunity to see the entire group bickering their way through a hairy situation together. Pam and Krieger definitely need to go on more adventures together though–and maybe they will, now that the aliens taught them the key to understanding the entire universe.

@theworkprint
Follow
Previous article‘Evolve’ Review: Hunting’s Better in a Pack!
Next article‘RiffTrax LIVE! – Sharknado’ Review: Laugh, you son of a…