‘RiffTrax LIVE! – Sharknado’ Review: Laugh, you son of a…

I dare say, despite those who might disagree with me due to the notion that each movie should get a fair shake, that most of the films RiffTrax picks on are ones that are pretty deserving. Over the years, we’ve seen Mike Nelson, Kevin Murphy and Bill Corbett bust some cinematic heads, taking on such cinematic tripe as Birdemic, Plan 9 From Outer Space and the entire Twilight series.

For those who have no idea what I’m talking about, allow me a moment to address the uninitiated…

Once upon a time, there was a television show called, “Mystery Science Theater 3000”. The show was the creation of Joel Hodgson, a writer/comedian from Wisconsin. It was about a man named “Joel Robinson” (played by Hodgson, himself) who was shot into space by his crazy mad scientist bosses and forced to watch the worst films ever conceived by human beings. However, 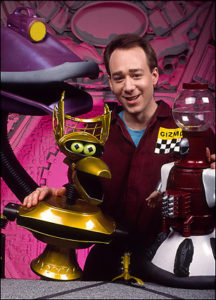 Joel wasn’t alone in this experiment, having crafted two robots to help him: Crow T. Robot and Tom Servo. Each show was comprised of Joel and the robots sitting in the first row of the theater (built into the satellite they inhabited) and making fun of everything they watched. Despite the odd premise, the show was extremely popular and ended up running every Saturday night on Comedy Central for seven straight years. When Comedy Central killed the show in 1996, SyFy picked it up again before it was finally cancelled for good three years later.

If any of this sounds unfamiliar or strange to you, this was back when Comedy Central was just taking its first steps. South Park and The Daily Show were but mere twinkles in a writer’s eye. As a result, the network took big risks on shows that weren’t completely accessible to even a majority of people. That designation was something that described MST3K in a nutshell: the show was unique in that each episode was two hours long and expected its audience to sit through some fairly horrible feature films — but with the hopes that the running commentary and low-budget charm and skits would leave a viewer in stitches. Devoted fans (called “MSTies”) were rewarded each week, while several others had no idea what to make of the show, thus causing them to change the channel.

In that time, Joel quit the series halfway through its lifespan and the show gained a new host in the form of long-time writer, Mike Nelson. By the time the show ended, “Crow” changed voices, having been replaced by writer Bill Corbett. Kevin Murphy was the show’s true veteran and played Servo for 9 of the 10 years the show was on.

Joel, with the original cast of MST3K, would form a venture called Cinematic Titanic, which would continue to riff on bad movies in the same “Shadowrama” style MST3K pioneered. After its demise in 2013, Joel resurrected Mystery Science Theater in the form of annual “Turkey Day” marathons, which stream over YouTube. Jim Mallon, one of the show’s co-creators, would also launch a website, dedicated to the further adventures of Servo, Crow and Gypsy.

Mike, Kevin and Bill, however, are truly special in that they are consistent in keeping the spirit of the show alive with “RiffTrax”, a concept that is brilliant as it is simple: the three writers craft humorous audio commentary tracks which you can download at their website. The tracks are meant to pair with movies of their choosing so, as you watch cinematic dreck they subject you to, you’ll also hear their commentary.

In 2010, RiffTrax took this concept to movie theaters, streaming live shows across the country with the help of Fathom Events. Their initial victim was the classic “Plan 9 From Outer Space” — and the RiffTrax LIVE! 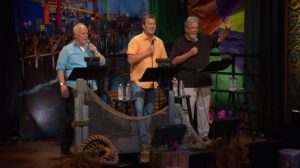 shows have been an annual tradition. Since its inception, the RiffTrax crew has taken on the old school (“House on Haunted Hill”, “Reefer Madness”), the familiar MST3K classics (“Manos: The Hands of Fate”, “Santa Claus Conquers the Martians”) and the new school (“Starship Troopers”, “Birdemic”).

Even films like “Casino Royale” and “The Hunger Games” aren’t immune to criticism.

The latest “LIVE!” feature was the SyFy Channel film, “Sharknado”, a film that, like “Birdemic” before it, is absolutely perfect fodder for RiffTrax.

Before I get to the main feature, the film is preceded by a classic short from the MST3K days, called “A Case of Spring Fever”. As is the case with most of the short films these guys make fun of, the production company that assembled it (Jam Handy) meant it to be educational. Unfortunately, it comes off as weird and creepy instead: a man is fixing his couch because, back then, you just

fixed what ever you had…seriously. My grandfather once modified the voltage fuse for our Christmas lights back in the day because he didn’t feel like paying seven bucks for a new strand. Anyhow, I digress: the dude fixing the couch is tired of repairing the springs and wishes that he’d never see another spring. That’s when “Coily the Spring Sprite” shows up to take away every single spring ever so that nothing that runs on springs works properly. This lasts all of two minutes before the guy realizes his mistake, apologizes, and the world is rewarded with the return of springs. Instead of showing the apocalyptic damage caused by one lazy goofball’s dark wish, we get a seemingly unending lecture on the values of the ordinary spring, narrated, of course, by the same schlep who, just minutes ago, didn’t know a spring from a screw. It’s hard to like the re-dos from Rifftrax because this short was a classic the moment it was televised 15 years ago. That said, the riffing is original with some great lines:


As for “Sharknado”, there isn’t really much I can say, except that it’s a thinly-veiled parable about the dangers of climate change. Also, sharks. Sharks that are sucked into a tornado in the middle of the ocean and dumped into the middle of Los Angeles to make all sorts of trouble. Actually, we don’t see an actual “Sharknado” until much later in the movie when all hell breaks loose for the epic finish this movie lays on you. Most of the sharks are the result of arbitrary coastal flooding due to a huge storm that’s ravaging Southern California. But you can’t really get people excited for a movie called “SharkFlood”, can you?

Needless to say, the RiffTrax crew is at their best when it comes to movies like Sharknado. It’s a film that features everything you could ask for in a movie of it’s kind: horrible visual effects, terrible acting, and the fact that, despite the aforementioned, it still doesn’t give a damn and just says, “Come at us, bro!”

I’ve been to every single RiffTrax LIVE! and this was the first of the 2014 LIVE! line-up which included 1998’s Godzilla re-boot, Anaconda and Santa Claus. Of the four films featured, I have to say that Sharknado is, truly, the best of the 2014 lot, with nearly every single joke hitting its mark from the first moment on.

Here were some of the highlights:

RiffTrax LIVE!: Sharknado can be purchased on RiffTrax.com as of Wednesday, February 18, 2014.