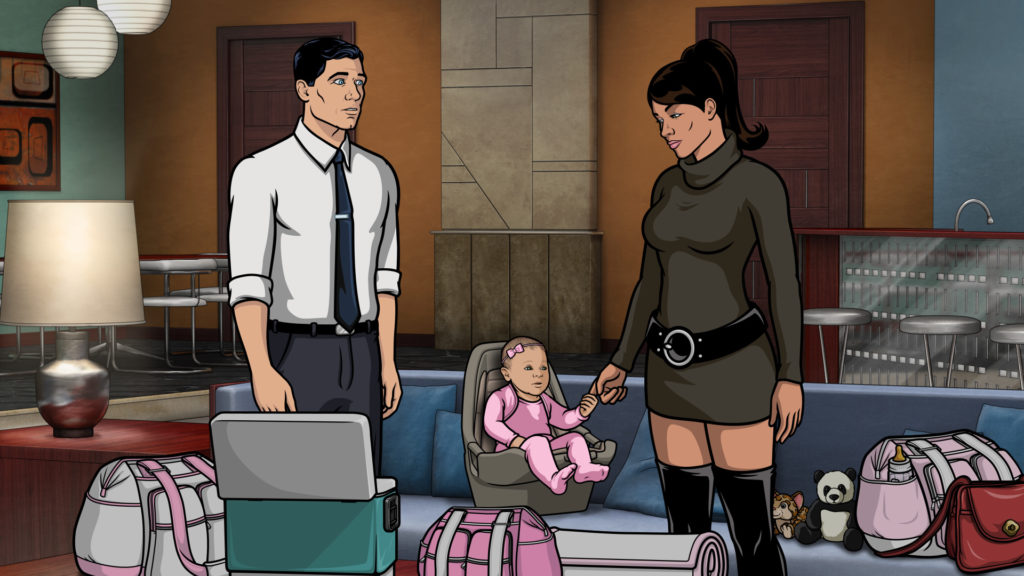 The introduction of Archer and Lana’s child to the series should be a pretty big game changer, but it’s something that has received surprisingly little attention this season. Archer in particular hasn’t really spent any time at all with AJ thusfar, which is a bit of a disappointment to anyone hoping for some more wee baby Seamus-style shenanigans. “Sitting” takes a step towards correcting this grievous oversight with Archer’s first night babysitting AJ, which of course doesn’t go exactly as planned.

It goes without saying that Archer isn’t exactly father-of-the-year material, and it makes sense that Lana would be hesitant to let him spend any time alone with AJ, lest she return with a tattoo on her tiny shoulder. The challenge for the show therefore isn’t to merely find contrived reasons for Archer and AJ to end up on wacky adventures together, but really to portray him as a capable father (albeit in his own, distinctly Archer sort of way). Archer’s cavalier attitude to babysitting is neither surprising nor of any comfort to Lana, who nevertheless decides to leave them alone with nothing but an emergency contact number. Armed with knowledge gleaned from a handful of The Baby-Sitters Club books (“I’m totally a Kristy with like a dash of Claudia”) and a stubborn desire to prove Lana wrong, Archer settles in to a quiet evening with his daughter.

Before he can enjoy the black Mexican he mixes himself (a blend of coffee liqueur and tequila, the only things left in his poorly stocked bar), Slater barges in with a gunshot wound and Farooq Ashkani, a Pakistani double agent voiced by Kumail Nanjiani. Farooq’s cover was blown and Slater needs Archer to babysit him while they arrange transport to a new safehouse. Of course, Farooq is really working for Pakistan, and forces Archer to help him break into the CIA mainframe. Archer reluctantly agrees, since Farooq has baby AJ at gunpoint. 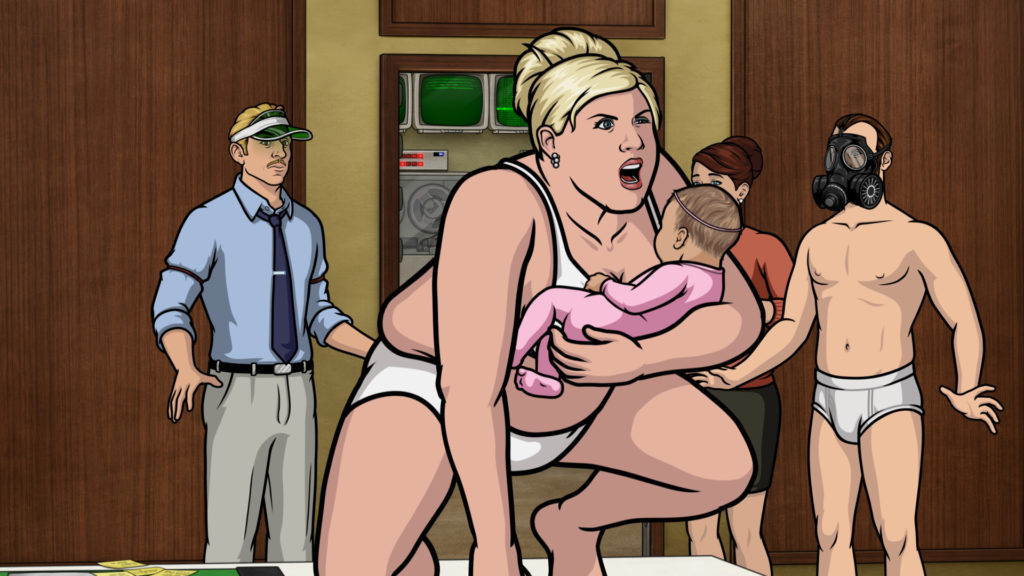 Archer isn’t a great dad or even necessarily a great person, but is devotion to those he cares about is perhaps his most redeeming quality. The ways in which he tries to keep AJ safe even at gunpoint are rather endearing, from his insistence that Farooq hangs the “Baby on Board” sign in the car before driving to the office to his meticulous hunt-and-peck typing while breaking into the mainframe for fear of messing up. They walk in on the office drones’ poker night, and a momentary distraction allows Pam to whisk AJ to safety (a nearly naked Pam leaping from desk to desk with AJ in her arms à la King Kong might be the best visual of the entire season so far). It’s only with AJ out of harm’s way that Archer can unleash his full paternal wrath on Farooq for holding his child at gunpoint. Even when he’s ultimately outgunned, he makes a desperate and selfless bid to flood the office with Krieger’s nerve gas.

None of that proves to be necessary, however, as it was all an elaborate plan devised by Lana and Malory to test Archer’s parenting skills and responsibility. He passed with mixed results, all things considered, but it’s not as though his commitment or resolve ever needed testing. The “surprise” ending is a little deflating–a show like Archer ultimately doesn’t need to artificially raise the stakes. Nevertheless, baby AJ’s a great grounding presence who really helps to soften Archer’s recklessness and sense of impunity. I’m looking forward to seeing more of Archer’s adventure into fatherhood, especially if it means more of Pam climbing to the roof to swat at biplanes.

@theworkprint
Follow
Previous articleFirst Look: Behind The Scenes of ‘SPECTRE’
Next article‘Fifty Shades of Grey’ is one shade of inexcusable cinematic pain