Fans of smash FX anthology American Horror Story are used to the series introducing one eccentric story component after another. For star Angela Bassett, however, it wasn’t the killer clown or traveling circus that caught her most off guard when preparing for the current season, Freak Show. While the Oscar nominee had already portrayed iconic voodoo queen Marie Laveau on last year’s AHS cycle, Coven, this time around it was her character’s physical description, not supernatural powers, that initially presented the biggest shock.

“I think it was about two weeks before I was scheduled to come down to start shooting that I got the, you know, the hot off the press script. I sat down to read it to see and I remember wondering, ‘Now, how am I going to know who I am?’” Bassett began, talking with The Workprint and other media outlets during a recent conference interview. “Then you read the stage direction: African-American woman in her 40s, hermaphrodite, three breasts, and a ding-a-ling. You’re like, ‘oh, my gosh!’ You immediately close the pages, and have to walk around and process that for a minute. You’re thinking, ‘What does that mean? If they thought I was crazy demonic last year, what are they going to think this year?’”

So far, Bassett’s performance as the free-spirited but emotionally stifled Desiree Dupree has already gone much further than skin deep. The character’s sexual ambiguity might have conjured a backstory of lifelong internal conflict, but when it was discovered in the Nov. 5 episode that Desiree is actually 100 percent female, her narrative arc opened up a whole new host of possibilities for the future. 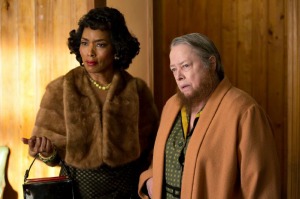 However, Bassett explained why this revelation won’t ultimately affect either her artistic method or perception of Desiree, and how the character’s real journey actually has little to do with gender.

“I just knew that it was absolutely going to be something that I had never done before. What does an actor crave, but new challenges? This certainly was going to be one of those,” Bassett said of her preliminary reaction to the character. “But I don’t think it’ll change how I approach or how she acts. I think she’s comfortable. I think she’s comfortable with who she is, by and large. I think she’s just had to find a way to work and survive in a world that she’s always been reaching for, what she calls normalcy — to have a family, a real family, and children of her own. I don’t think it’s going to change and make her more feminine or whatever it might be … I’m open, but I don’t anticipate it’ll change the way that she behaves. I think what influences that is how she’s treated, how she’s treated by others.”

Bassett’s fellow “freaks” include American Horror Story alums Jessica Lange, Kathy Bates, Evan Peters and Sarah Paulson, among others, as well as series newcomer Michael Chiklis as Desiree’s husband, Dell. It’s this relationship that illustrates the real core of Desiree’s identity and subsequent growing process, and Bassett discussed how their disintegrating marriage will ultimately give Desiree the platform she needs to embark upon true self-discovery.

“There was a time when he was kind and good to her, and believed in her, and made her feel valuable and special … [but] there has come a point where he crossed the line of no return,” Bassett said, referring to Dell’s persistent abuse and deception. “She thought she knew who he was, but she found out she was living with the enemy. There’s something about him that was dishonest and disloyal. They were there for each other. They told each other their painful truth. I think he crossed the line. Sometimes that happens and you can’t go back.”

When asked if she considers Freak Show as more inherently “dark” than Coven or other American Horror Story chapters, Bassett chuckled and again referenced Dell’s contribution to the season’s thematic depth. 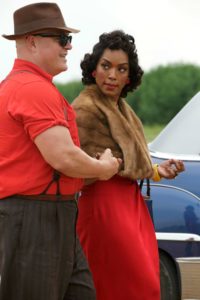 “You know, that’s what Chiklis says! I say, ‘Wait a minute, based on the type of show you’ve done, you consider this dark and strange?!’” she exclaimed. “But it’s a little dark. It’s dealing with how so-called ‘normal’ folks deal with those who are atypical or different. So that can get a little bit dark … what’s [really] dark is the secrets in men’s hearts.”

Working closely with Chiklis is but one professional perk Bassett noted. She agreed enthusiastically with the idea the AHS actors are, like the Freak Show itself, their own traveling performance troupe of sorts. For Bassett, the familial structure on set, in addition to the impressive pedigree, was a major selling point.

“That was one of the prevailing reasons for me joining the cast. I couldn’t believe I’d get an opportunity to work with Jessica Lange and Kathy Bates in a lifetime, especially at the same time. It’s wonderful,” Bassett gushed. “Everyone is just an ultimate professional. We have a good time. We have a good time with it. We all have an appreciation for this crazy world and the things that we’re asked to do. It stretches us and grows us. The fact that we get to come back year after year and they fashion some completely new insanity for us to play out is a plus. It’s thrilling.”

Although American Horror Story presents each new installment with a fresh setting, storyline and colorful cast of characters, the recent revelation that creator Ryan Murphy plans to connect each season has fans clamoring for clues. It seems understandable to assume the AHS actors would do the same, but Bassett discussed why she plans to keep her personal speculation to a minimum.

“I didn’t have a clue whatsoever what the part might be, what it might encompass when I signed on. I just knew I had a great time the previous year, and if that was any indication, it was going to be a wild ride,” Bassett said of her decision to return for Freak Show. As for whether or not she has any idea how Desiree Dupree or Marie Laveau could be potentially linked, Bassett cited blissful ignorance at first but couldn’t help divulging a glimmer of curiosity.

“Not one, nor have I considered it. That [does] give me something to think about … Sounds like a great college term paper to me,” she laughed.

@theworkprint
Follow
Previous article
‘Homeland’ Review: “Halfway to a Donut”
Next article
‘AGENTS OF SHIELD’ Recap: “The Things We Bury”