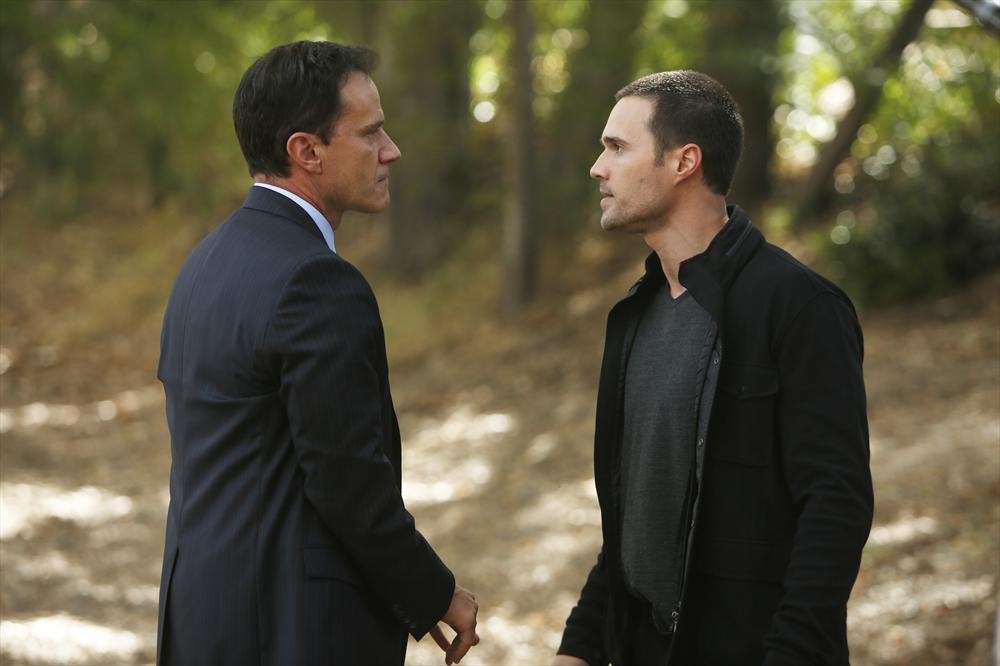 ‘AGENTS OF SHIELD’ Recap: “The Things We Bury” 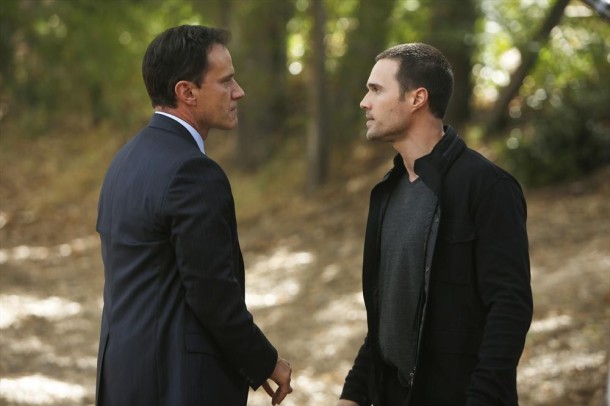 With only handful of episodes to go before Agents of S.H.I.E.L.D. launches into its mid-season break, we’re pushing the envelope on characters, mythology and stakes. (Uh, anyone else worry about Trip tonight?) I’ve repeatedly praised this show for its immense improvement from a year ago, and I continue to sing its praises as it keeps finding solid footing with each passing week.

Like most episodes this season, “The Things We Bury” was explored in a way that was both literal (Ward and Christian and the family well) and metaphorical (Whitehall’s de-aging, Coulson’s decision to not tell Skye about meeting her father.) In that same sense, many things finally came to a head — The Doctor confronted Coulson, we got more information about the 0-8-4 mystery, and (assuming that this is really the end of the Christian Ward storyline) we finally got Grant Ward back in a position of power. For the first time in a long time, it seems that Ward is exactly where he wants to be — only now, he’s not being controlled by anyone. He’s doing his own bidding, and in case you couldn’t tell, he really likes it.

The episode spent a large chunk of time toggling between present day and flashbacks to 1945, which is where we started, with Whitehall interrogating a man who was presumably searching for the Obelisk. Whitehall tricks the man into touching it and when he dies, they bring in the next woman — a young Asian girl (Dollhouse‘s Dichen Lachman) who, though terrified, is smarter than her previous prisoner, as she refuses to touch the Obelisk at all. Whitehall eventually forces her to, but instead of getting horribly burned, the Obelisk reacts. (Like, really reacts. It gets all glowy and everything.) This intrigues Whitehall greatly. He wants to study her, to find out everything about her that makes her “special.” We’re interrupted here by news of Red Skull’s death, and you can thank Captain America for that one.

Back in the present day, Whitehall is getting annoyed with the slow progress of his team’s study of the Obelisk. He brings in The Doctor, who claims that it has properties and powers Whitehall doesn’t understand. It’s a key. It can kill, but it’s only doing so to protect itself. He calls it “The Diviner” and then tries to persuade him that if you take it to a really special place, it’ll do something even cooler. Obviously.

Speaking of really special places, Coulson is headed to Hawaii with Skye, Fitz and Trip, while May is holding down the fort with Simmons, Bobbi and Hunter. Did I mention that despite the growth of the cast, the split team dynamics are really working for me? Because they really are. Bobbi interrogates Bakshi and manages to not only work her way into my heart, but also wear him down (though he’s still holding out on giving them any real information). But Bobbi is good at this — like, really good — and thanks to Bakshi’s wording, manages to figure out that he may have a connection to Red Skull. Though it seems almost impossible, Simmons and May attempt to investigate further. Meanwhile, Christian Ward is on his way to his family’s summer home (aka a conveniently secluded cabin) when his brother pays a very surprise visit.

Coulson enlists Skye and Trip to run some strange errands in Hawaii, which involves handing off a watch and a coin to specific people. Fitz’s job is to activate a device that will be used in the field, though he’s only got one good hand, and Coulson needs him to be able to active the device in a certain amount of minutes. This is the Director Coulson I love and know, by the way — the one that believes in his team and pushes them to do things that they think are beyond their capabilities.

Back on the Bus, Bobbi is stick-twirling and ruminating over Hydra theories with Hunter, while Simmons and May are continuing their search for Bakshi’s connections. Simmons comes across a report from the one and only Peggy Carter, about the original 0-8-4. (And that should be a big deal, but she’s too busy appropriately fangirling over Peggy’s work the same way I would, if I held something from such an awesome lady hero.) Also interestingly, we get a hint dropped that Agent Carter was May’s mentor, and now I just want all the backstory on that relationship. Simmons finds that the file mentions a man named Werner Reinhart and we flash back to 1945 again — and to Whitehall, who at this point, is actually Reinhart, being interrogated by Peggy. He’s promising her secrets to all the items her and her team have recovered, and information on how to save humanity, but Peggy is clearly having none of his bribes.

Meanwhile, at Site of Brotherly Bonding, Ward is leading brother through the woods as they argue about their past mistakes, including the house fire and the well accident. He eventually forces his brother to dig up the well that his parents have covered up, and you can just tell this isn’t going to end well for one of the parties involved (ahem, Christian.)

May and the team are going through Peggy’s S.S.R. files, which conveniently never made their way into the S.H.I.E.L.D. database and therefore were never seen by Hydra. Simmons finds Whitehall’s picture, looking the exact same as he does now, and deduces that his very personal connection to Red Skull isn’t unwarranted — he was the same man who was once known as Reinhart. May pieces together that he aged in a prison called “The Rat,” but clearly must have found some way to reverse the aging process. A look at “The Rat” in 1945 does indeed show Reinhart wasting away in the cell that Peggy’s left him in, until 1989, when he’s rescued by a man sent by none other than Alexander Pierce (who we all know from a little film called Winter Soldier.) “Hail Hydra,” the agent says before wheeling him away, and I really love how S.H.I.E.L.D. is integrating all these small building blocks of their narrative/mythology with the specifics of the Marvel Cinematic Universe. It is indeed All Connected, and I look forward to seeing how much more connected it is once we start getting closer to Age of Ultron next year.

Whitehall is brought to Austria and told that the woman he had interrogated earlier is still alive. Not only that, when she’s brought to him she looks exactly the same as she did in 1945. He experiments on her in a pretty gory and graphic fashion (that admittedly made me uncomfortable) until he’s pretty much left her for dead. When Bobbi goes back to interrogating Bakshi again, she claims she knows Whitehall’s secret — how he changed his name once he de-aged, and though Bakshi tries to bait her with tales of how she acted when she was undercover at Hydra, Bobbi doesn’t budge. Bakshi takes matters into his own hands, and smashes a cyanide capsule inside his cheek in a suicide attempt.

In the woods, Ward is trying to get his brother to admit that he pushed Thomas into the well. When another argument breaks out, Ward ends up threatening to throw his brother down the same well they just uncovered, and the near-death experience causes Christian to finally admit that he wanted Thomas dead, because he was the only one their mother didn’t torture. Gotta love those screwed up Ward family dynamics. The two seemingly make up, though we all know there can’t really be any happy endings, and so we’re left wondering when the other shoe is going to drop on this storyline.

Coulson’s team has now made it to Australia, where they plan to infiltrate a satellite system, aided by the connection of the objects that Coulson has set up in Hawaii for just this purpose. (They’ll cut the feed in Hawaii, which will allow Skye to hack the network and Fitz to active the transceiver.) Naturally, that’s not going to go as smoothly as they think, and both Coulson and Trip end up getting ambushed by Hydra, with Trip getting critically wounded while trying to protect Coulson. While I pray to my TV that they won’t kill off one of my favorite characters this early, The Doctor arrives to help. Uh, I mean “help.”

The Doctor essentially uses Trip as a bargaining chip for Coulson, and with Trip’s life in peril, Coulson and Fitz have no choice but to disarm and obey. The Doctor drops some vague hints about “the city” and references the fact that whatever happens, Skye will be in the center of it. He tells Coulson how to save Trip’s life so that he can have the opportunity to escape, but not before insisting that “Skye” is not her name — and also further reiterating that Coulson is not her father.

We see Whitehall talking to someone who is eventually revealed as Grant Ward, discussing second chances. He shows Ward a report of a murder-suicide with Christian and his parents, with Christian’s confession from earlier being broadcasted, and remember when I said this wasn’t going to end well? The Ward family has really had a rough go of it lately. Hunter and Bobbi watch Bakshi stabilize, which turns into them arguing (of course) about Hunter’s inability to trust Bobbi. Bobbi’s already on edge, upset that she miscalculated in her interrogration, and naturally this all leads to what we’ve been hoping to see from a few episodes ago: hot, angry van sex. Am I into it? Let me just say that I am a Clint Barton/Bobbi Morse stan until the day I die, but oh yes, I am so into it, and so I will let the show go here if it wants to. Mostly because Nick Blood and Adrianne Palicki have such amazing chemistry, it’s impossible not to want them to be together all the time.

While Skye shows Coulson a map of the city, Coulson debates on whether to tell her about his run-in with her father. Fortunately, the conversation is cut short before he can decide what to do, but we know that the confrontation is coming, and when it does (perhaps before the mid-season finale?) I can’t imagine that this surrogate father-daughter relationship won’t undergo a healthy amount of strain.

At the end of the episode, The Doctor comes in to meet with Whitehall and Ward, who tells The Doctor he knows Coulson’s team so well, they’re like family. Meanwhile, in flashbacks, we see a much younger doctor finding the body of the dead Asian woman who Whitehall had experimented on. He cries while he holds her, vowing to do to “him” what he did to her, and we soon realize that this magically-powered-non-aging woman who can touch an alien object is none other than Skye’s mother (and kudos to the casting department for picking up on the uncanny resemblance between Chloe Bennet and Dichen Lachman.

So we’ve known for awhile that Skye is an 0-8-4, and also that her mother was an 0-8-4 and now we at least see a little of what that means — she apparently has powers that can work the Obelisk, and she has the de-aging secrets locked within her. Obviously, there’s much, much more to be discovered, but drop your theories now — do we think Skye is an Inhuman? (It seems that every new piece of information is steadily getting set up to lead to this…)

Quoteables:
“He [Fury] could only see five steps ahead, which, for a one eyed man is impressive.”  – Coulson