Before reviewing Yoshi’s Woolly World for The Workprint, it wasn’t even on my radar. Who could blame me? With epic releases such as Fallout 4, Rise of the Tomb Raider, and Halo 5: Guardians hitting in the same time frame, and with Nintendo’s lackluster holiday release schedule, I nearly forgot it’s existence. After playing it, however, I realized how much of a travesty that really was.

The first thing you will notice when booting up Yoshi’s Woolly World is the unique design. Nintendo and company Good-Feel took what they had learned with Kirby’s Epic Yarn, and raised it to the next level. The game is absolutely gorgeous and pushes the WiiU to its peak, oozing with charm out of every seam.

The characters and world look like they have been ripped straight out of a scrap-book–with small details such as the fuzz that sticks up from Yoshi and his enemies, and Shy Guys carrying around crochet hooks as weapons–truly making this one of the most adorable games you will ever play. I almost feel like the charming look may actually hurt the game in some cases, causing some to look at the cute exterior and not realize the gem that is waiting inside.

Speaking of gems, Woolly World takes a page from the Epic Yarn playbook, and has you collecting multicolored gems, as well as other collectibles, during your trip through the 6 different game worlds. Gems act in the same way as coins in previous Yoshi’s Island games. Where in past Island games you would collect coins hoping to find the red coins hidden throughout the level, Yoshi will be looking for 20 special “stamp gems” hidden throughout each world. 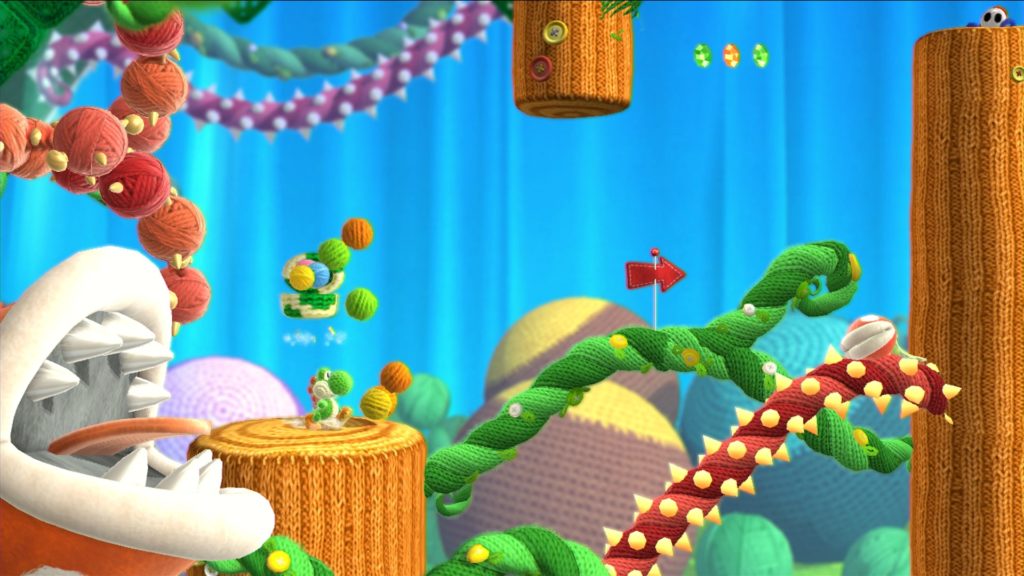 Other collectibles include the always present sunflower, hearts, and the new Wonder Yarn. If you find all 5 Wonder Yarn throughout a stage, you will unlock a new pattern for Yoshi (he definitely doesn’t have a lack of pattern choices). While some range from adorable to ugly to “I don’t know what they were thinking”, you will absolutely want to collect them all to see what crazy ideas Nintendo has thought up.

While many talk about the look of the game, the unique design is only part of why it is one of the best platformers of the year. Every level holds something unique, keeping you on your toes throughout your adventure, and always keeping things fresh. The game starts off somewhat slow, teaching you the basics,  giving you an eye of what to look for to uncover every nook and cranny the world has to offer; however, it definitely ramps up as the game goes on.

Just a few examples of what you will experience: In one level Yoshi may turn into a motor bike; in another he may be sticking to conveyor belts and riding up walls in a factory; in the next level he may be hanging onto a curtain for dear life as it speeds down rails into the great beyond; and in yet another level Nintendo takes a unique approach with shadows. I don’t want to spoil too much, just know that the level design in the game is top-notch. I wouldn’t expect anything less from Nintendo.

The difficulty of the game is what you make it. If you are the type of person who needs to find every collectible and get that long sought after 100%, you will definitely be in for a challenge, and will get the most out of this game. If you are just looking to experience the worlds and see what the game has to offer, you may breeze through it rather quickly, which may be a disappointment to some. I feel that Nintendo has handled the difficulty conundrum very wisely, since this allows for both experienced and more casual gamers alike to enjoy what the game has to offer. The game also offers a special “mellow mode” for the younger audience. 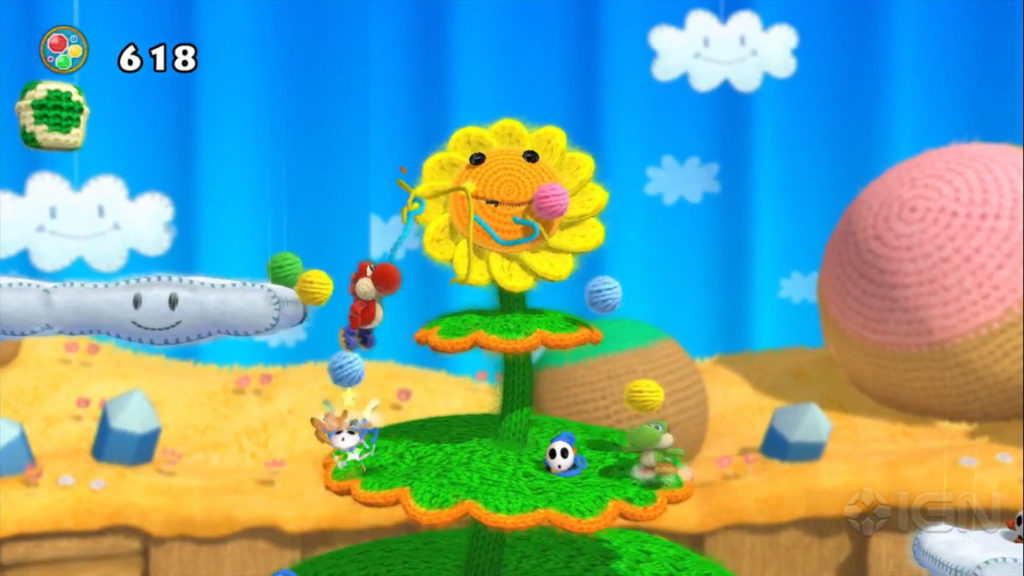 As far as controls go, you have just about every control scheme under the sun. You can play with the gamepad, the pro controller, the classic controller pro, and the Wii remote turned on its side. The reason I bring this up, is that I tried all of the control schemes, and must say that I was very surprised to find that I enjoyed the Wii remote the best. Since the game is a 2D side-scroller, the lay out felt perfect.

The best part of the Wii remote control scheme is the egg throwing. Normally, you would hold down the A button and watch as the arrow ticks along a path, letting go when it lines up with the proper trajectory. With the Wii remote, it uses motion control. You simple hold down the A button and tilt the remote to aim. While this may sound difficult, in practice it feels fast, fluid, and made egg throwing a much smoother experience. This just reminds me that the WiiU is what the Wii should have been all along.

As for the music, it is the best Yoshi music in a long time. The music covers a wide variety of styles and features many different instruments, and you will find yourself humming along as you sleuth out the many hidden gems and sunflowers. It definitely add to the adorable experience, and fits the game perfectly. It is greatly improved over the disaster of a soundtrack that was Yoshi’s New Island on the Nintendo 3DS.

I must also mention that Yoshi’s Woolly World features Amiibo support. Each Amiibo will add to the number of patterns that Yoshi can select from. While not game-changing, it definitely put a smile on my face to play through stages as Donkey Kong Yoshi. If you have a Yoshi Amiibo, either the specific Woolly World Yoshi’s or the standard Super Smash Bros. Yoshi, you can add a doppelgänger that will copy every move you make. This is very similar to the Double Cherry power-up in Super Mario 3D world and Toad’s Treasure Tracker.

There are a few downsides to the game, however. The boss battles are hardly worth mentioning. They are extremely easy and can be beaten on the first try every time. You do unlock a special Boss Battle mode after completing game, which speeds up the boss battles to a more frantic pace, but it is too little, too late. The other complaint is with the co-op. While Nintendo has been advertising the special co-op mode, these stages were absolutely made for single player. Player two, more often than not, just gets in the way, making easy portions of the game much more difficult.

While Mario’s faithful companion may have had some rough patches along the way, Woolly World sews up the loose ends, fixes the frays, and buttons the lips of the naysayers. In other words, Yoshi’s Woolly World brings greatness back to the Yoshi series. It is one epic yarn, indeed.

Previous article
‘Heroes Reborn’: Game Over For These Folks
Next article
‘The Walking Dead’ Review: Another One Bites the Dust