‘The Walking Dead’ Review: Another One Bites the Dust

There’s only one question on everyone’s mind after tonight’s episode of The Walking Dead, and it’s a big one. The sort of question that makes the rest of “Thank You” feel largely irrelevant, and the sort of bombshell that any late watchers will have a lot of difficulty avoiding. This episode might as well have been fifteen minutes long, with the rest of the content saved for after the audience has had a chance to process what they’ve seen.

Rick’s plan to herd the zombies away from Alexandria is derailed by the Wolves raiding the town causing things to go downhill very quickly. As Rick and the others rush to Alexandria’s aid, they’re also trying to find ways to redirect the horde now heading towards its walls. Overall, “Thank You” is imbued with a terrific intensity and suspense. With the zombie horde at their backs and Alexandria’s uncertain fate ahead of them, our group has no choice but to push forward despite their increasingly bleak odds. The desperation and forward momentum really sets “Thank You” apart from the chaos of “JSS”, but the episode is also much darker as the season continues to cut down its sizable cast of characters.

Right from the start, the naive and inexperienced Alexandrians are immediately dropping like flies in what feels like a condensed montage of every clichéd death in the show so far (friendly fire, broken ankle, running away like a coward, being dragged down while trying to climb a fence). The depths of their ineptitude borders on comedy, and Michonne gets the lion’s share of characterization simply because the others aren’t around long enough to really command any sympathy. As casualties accumulate and the group inevitably slows down in a small abandoned town, Glenn and Nicholas attempt to set a building on fire to serve as a distraction, but they ultimately find themselves stranded on a dumpster in an alleyway. Nicholas, despite his admirable redemptive arc, finally gives up and puts a bullet in his own brain. His falling body takes Glenn down with him into the hungry mouths below. 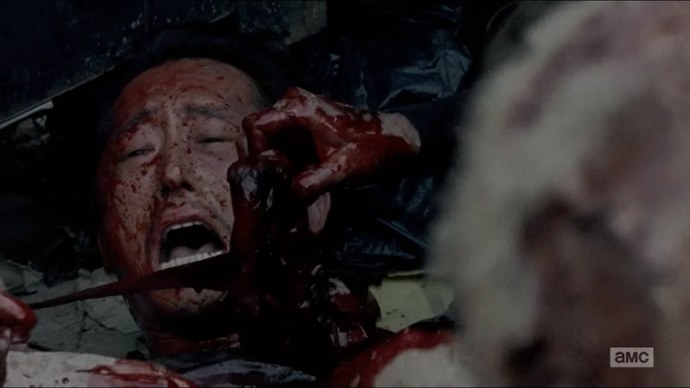 So, did The Walking Dead really just kill Glenn? It’s hard to say with absolute certainty, given how little telegraphing the episode provided. Glenn has been there from the start, and a main character like that doesn’t meet such an abrupt end without a proper send off. It doesn’t feel right, because as an audience we’ve come to expect the drawn out goodbyes, the moving final words, a noble sacrifice, or some dramatic song with lyrics. Glenn’s death seems almost dismissive, and despite delivering the biggest gut punch of the episode, it isn’t even the final scene (though we are given some slow motion shots of his screaming, bloodied face). If Glenn is really and truly dead, then The Walking Dead deserves a lot of credit for pulling it off so boldly and catching everyone off guard.

For those still desperately grasping at any shred of hope that Glenn might still be alive, there is the (very slight) possibility that he was being shielded from the walker onslaught by Nicholas’s corpse. The fountain of blood and viscera we see might be coming from Nicholas, serving both as a distraction for the horde and disguising Glenn as a potential meal. The Walking Dead seems more than eager to indulge wild speculation; the scene is choked with zombies and the camera angles are just ambiguous enough to offer that glimmer of hope.

While Michonne, Heath, and Scott finally make it to the walls of Alexandria, Rick finds himself trapped in an RV while trying to redirect the horde. He fights off a surprise attack from the Wolves that Morgan let escape last episode, but isn’t able to start the RV again before the walkers reach the vehicle. It’s been an absolutely brutal and relentless couple of episodes–it’s almost hard to believe that the season’s just getting started.