‘Wynonna Earp’ – “She Wouldn’t Be Gone”: Let Me Sing You The Song of My People

If you thought last week’s Wynonna Earp was good, strap in boys and girls because things are about to get craaaaaaaazy up in Purgatory.

When we left off, WayHaught had become canon, Wynonna had forgive Dolls, and Bobo had bought up Shorty’s Saloon. Now, I don’t know if y’all know this about Wynonna yet, but she’s a teensy bit irrational, and kind of has a thing for grudges, so of course she’s going to be a bit peeved at Bobo’s actions. Naturally, she storms into Shorty’s without thinking, all anger and A+ hair game with poor, newly unicorned Waverly in tow.

I said this last week and I’ll say it again, these encounters, while exciting, make little sense to me. Bobo has Wynonna severely outnumbered, what’s to stop him from shooting both heirs and being done with it? Self-preservation seems to be the only thing stopping her from putting a bullet to his head. And despite their ongoing tête-à-tête, Bobo seems to have a bit of a soft spot where the Earp sisters are concerned but even then, they are his enemy. Unless they’re his ticket to freedom, in which case, he needs them alive. Whatever the reason, Bobo and Wynonna’s relationship is fascinating to me, one filled with loathing and bitter respect. 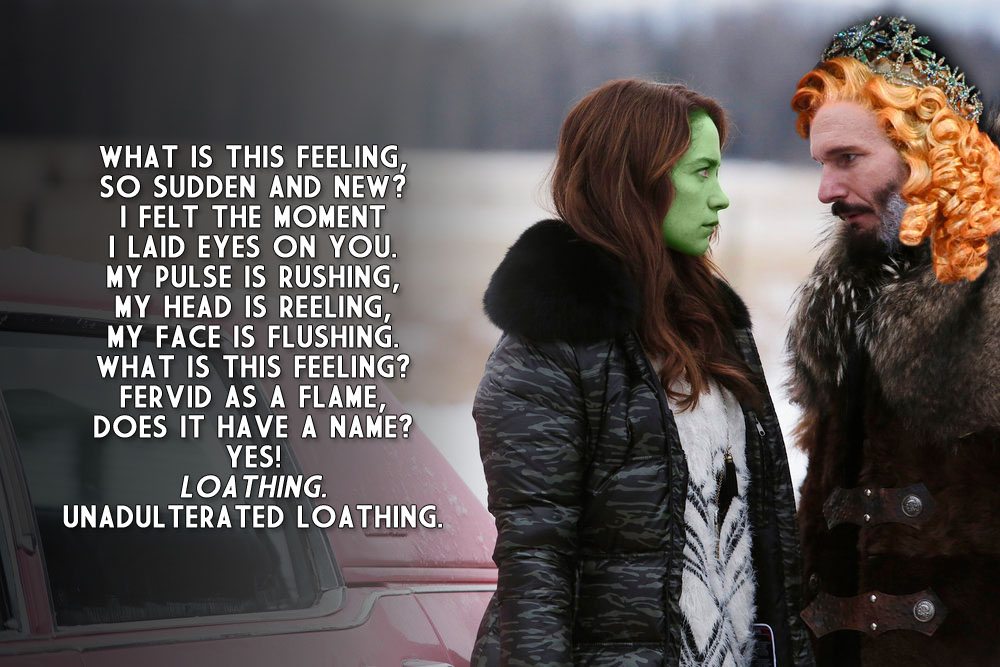 During the spitting contest between Wynonna and Bobo, Waverly, ever the hero, manages to bug the saloon so the sisters, along with Dolls, can hear everything Bobo says to his revenant minions. Though, not without Bobo stealing Waverly’s necklace first and I’m sure that totally won’t come back to haunt the Earp sisters AT ALL. Of course, this little bit of intrigue doesn’t last long as Bobo finds the device and outs Wynonna and Doc’s romantic interlude. Wynonna, in a moment of sheer panic and adorableness, tries her best to change the subject and utterly fails.

“So who’s this Lou guy?” REAL SMOOTH, WYNONNA. But Dolls is a professional and definitely not one to run from his problems, so he gets up, completely cool with the image of Doc’s horse doing things to Wynonna, and goes somewhere. Anywhere. Wynonna, also handling the news well, interrupts a very horny S.S. Wayhaught ready to set sail once again in the sheriff’s office, and she’s completely oblivious to the universal sign for “WE TOTALLY WEREN’T DOING ANYTHING.” Then, in another case of “Wynonna makes great decisions” she meets with Doc who tells her she would look very pretty in blue and YOU GUYS I REALLY DON’T KNOW. I told myself I wouldn’t fall for a man with that kind of facial hair but he loves the color pink and he’s got these crazy eyes and he gets Wynonna and it’s all very creepy and look, I just have feelings, ok? Wynonna then ruins the mood to remind Doc that they’re just having sex and there’s no reason to get all emotional and attached and look, it’s just a car, ok? Her phone goes off to remind her it’s time to encourage that love triangle thing they have going, so she runs off to properly stalk Doc for a while. She’s an equal opportunity creeper.

Instead of watching Dolls from around the corner like any professional stalker, Wynonna intentional sets off his car alarm to draw him out and give him a mini heart attack. She’s so thoughtful that way. After teasing him with the prospect of handcuffs, she finds Dolls’ revenant prisoner and after some gun play, the pair learns that Lou lives in the woods and is friends with wolves, so off we go with another Jen musical reference. 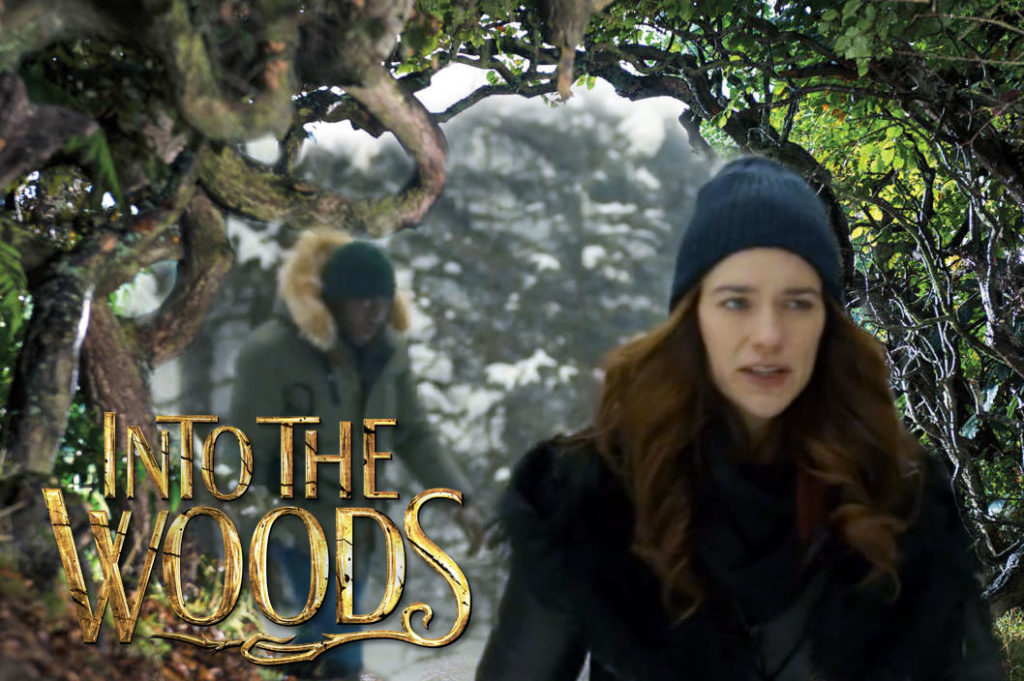 After some mystical shenanigans in which our heroes head toward the light, Wynonna ends up in a creepy plantation house, clad in a white dress, and is bathed by beautiful women. She’s understandably afraid of her current situation, but mostly she’s angry they just set her phone on fire. Dolls is then brought in, tossed on the ground, hands bound, definitely not in a frilly white dress, and Men’s Rights Activists everywhere are shrieking at the preferential treatment of women in this cult.

Wynonna shares a moment with one of the cult members, Eve, and then knocks her over the head with a chamber pot because no one ever said Wynonna had social skills. She rescues Dolls with her sarcasm and they try to get the hell out of dodge but Lou is all:

He lets them escape but only after “marking” them and we know from the earlier sequence our heroes weren’t privy to that bad things happen to those who are marked by Lou. After having bags put over their heads (by Doc/Wynonna shippers, I assume), Wynonna is dropped off in the middle of town where as Dolls is left to fend for himself in the woods. Again. Wynonna calls Dolls’ cell phone and is all, “Now is not the time to be antisocial you beautiful set of biceps, you.” Dolls makes it back to the car in time to shoot up his meds and get a new puppy.

Meanwhile, Doc is off on his intrepid steed, ready to head out of town and run away from his problems when Team WayHaught shows up and interrupts his little jam session. 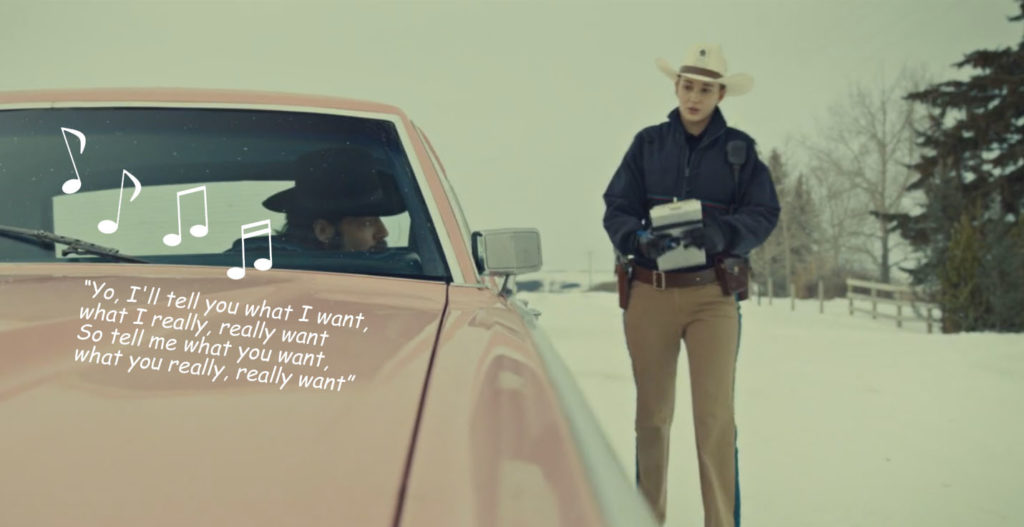 Nicole writes Doc a ticket and he’s all, “Okay please just let that be it because Waverly is about to come yell at me and that girl terrifies the bejesus out of me and my mustache.” Waverly does as is expected and tells Doc to grow the hell up and stop running away. Doc responds that it’s great that S. S. WayHaught has completed its maiden voyage, but no one’s buying a ticket to S. S. Docnonna, least of all Wynonna Earp, and my heart shatters into a thousands pieces. “Difference is, she adores you back.” UGH DOC. WHY. DON’T LEAVE.

Once Dolls and Wynonna find one another again (and Peacemaker), they head back to Lou’s Creepy Shack to free the hippies. A battle ensues, the bear from The Revenant attacks, and it’s Eve who fires Peacemaker and kills Lou to save the day. Wynonna and every other person watching thinks, “WHAT THE WHAT JUST HAPPENED.” But hey, poof goes the revenant.

Once all the girls from the cult have been rescued, Wynonna stares at the girl who saved her life with tears in her eyes, wondering aloud how it could be possible for her to kill a revenant with Peacemaker. Melanie Scrofano absolutely breaks my heart at the police station as she comes to realize that the girl who saved her life is her older sister, Willa. “She was dead. We gave up. We stopped looking for her.” Wynonna brings her home and Gus confirms Wynonna’s suspicions.

AND I HAVE SO MANY QUESTIONS.