‘Wynonna Earp’ – “Bury Me With My Guns On”: #Wayhaught Celebrate

Wynonna Earp is on it’s ninth episode and the show has really come into its own. And that’s a weird thought considering in episode eight, “Two-Faced Jack”, Wynonna killed the last of the seven, the revenants responsible for killing her father and older sister. Her goal for much of the season is now complete and Wynonna celebrates her victory in the most Wynonna way possible, by drinking and making out with random dudes. God, I love how unabashed she is with…everything. Wynonna is Wynonna and if you don’t like it, you can get the hell out of her way.

But things aren’t all inebriated in Wynonna’s head, as she has PTSD flashbacks to her time with Jack of Knives. Her mind gets the better of her and she pushes away Kyle/Pete/someone who isn’t Dolls and Doc comes to her rescue with the that best description of Wynonna Earp:

“She ain’t anybody’s but her own.”

Doc is a character I waver on weekly; one minute I ship him and Wynonna harder than I ship myself and sleep and then moments later he’s back to doing some other stupid, selfish thing and I curse myself for finding a man with a mustache attractive.

But Wynonna isn’t one to give in to silly things like emotions and demons and after she sleeps off her disastrous night, she sashays into the police station like she’s walking down a damn runway.

She banters with Dolls for a bit and honestly, if you tune into the show for one reason, let it be the witty writing. Like Gilmore Girls, sometimes it blows past so quickly you miss it, but believe me, the fast-paced conversations are amazing on Wynonna Earp. For instance:

Wynonna: “You’re not the only one who gets to be married to his job.”
Dolls: “Married? Slow down. At best it’s just my girlfriend.”

But then Dolls does that whole, “I am the job” thing and gives Wynonna a bogus assessment, kicking her off the team when she’s clearly still suffering from the whole “almost murdered by a psychopath” thing. So Wynonna goes to Doc Holliday to complain and relieve some stress the best Wynonna way she knows how. 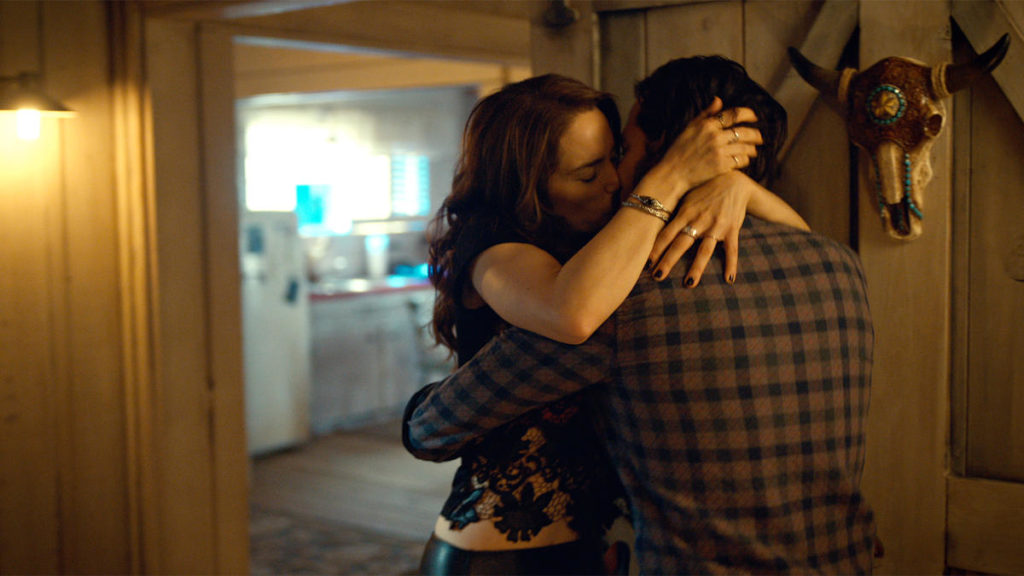 Wynonna tracks Doc easily enough, presumably following his trail of mustache hairs to the outskirts of town where Bobo is tormenting the poor Stone Witch. Up until this point the Stone Witch had been trying to resurrect her “boys”, baby demons she created in cahoots with their demon Pa. After Waverly smashed the skull of one of the boys, making it impossible to revive both, the Stone Witch decides to play mix-and-match with some body parts, creating a Super Son out of two skeletons. Things don’t go quite so well for newly resurrected Quasimodo and Mama Witch, as Bobo gets angry that the Stone Witch goes back on their deal and he flambés both the skeleton’s remains and Quasimodo before either could be properly baptized by the good word of the devil.

I’m a little bothered that the Stone Witch has been played up much of the season, shown as this woman who frightens not only Doc but Bobo as well, and then when push comes to shove, she cowers behind her demon son who’s easily put down after 12 seconds of screen time. I expected her to put up more of a fight and I recognize she had just drained her powers in order to resurrect that disappointment of a son, but still, even a teensy bit more than the begging and pleading woman would have been better.

It’s at this moment that Doc and Wynonna arrive and Wynonna comments on Bobo’s choice of fashion: 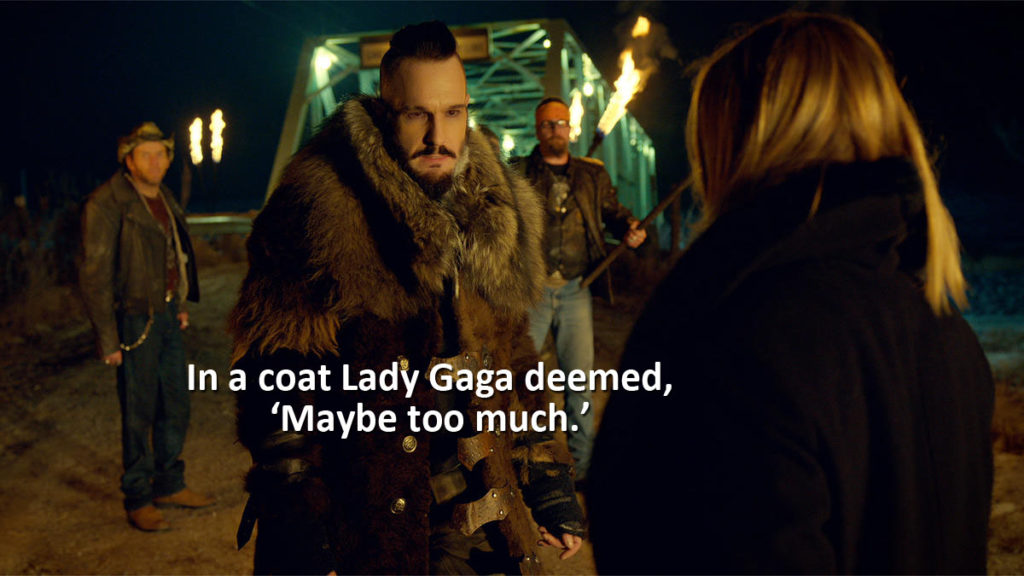 In an odd standoff, Bobo plays the gentleman card and lets Doc leave with both Wynonna and the Stone Witch, even with Wynonna acting all Scrappy Doo, “Lemme at ’em. Lemme at ’em.” Why the team constantly lets Bobo walk away from situations is beyond me, but hey, I don’t know the intricacies of the Earp curse and what magical powers Bobo’s white beard patch might have.

Doc and Wynonna take the Stone Witch on a fanciful date, tying her up and doing a marvelous rendition of Good Cop/Bad Cop. She sings her own version of Wicked’s “No Good Deed”, telling the lovebirds all about the Earp curse and how she meddled her way into the HolliEarp bromance. Doc gets especially wound up at being referred to as the sidekick and don’t think we didn’t miss the Witch’s snide comment about an Earp always picking the law man (ahem, Dolls) over Holliday.

Wynonna gets tired of the run around with the Stone Witch and takes her to some salt flats where they bury her in pain and get some real answers about Bobo and his plans for Purgatory. Basically, Bobo wants out. He’s tired of the whole revenant pimp shindig he’s got going on. Wynonna and Doc high-five one another on another murder mystery mostly solved and then Dolls hits up her cell phone and she says, “I must leave, my donuts need me.”

Meanwhile, in the most adorable part of town, Waverly and Officer Haught are off fulfilling the fantasies of shippers everywhere. The pair start off with a classic case of miscommunication, where Nicole wants to discuss the odd happenings in Purgatory and Waverly wants to talk about what it’s like to maybe be a unicorn, I mean, lesbian. The two argue because Nicole thinks Waverly is making fun of her and Waverly sulks back to Shorty’s Saloon where she learns that Gus is planning to sell the joint.

Things are rough for baby Earp, so she goes on an existential walk in the snow when Nicole drives up and they have an adorable, albeit awkward conversation in and out of her car. Later on, while Waverly is still having a crisis of being, Gus is all, “Here’s a check for a lot of money. I sold my soul to the devil to get it, so you may as well enjoy your sins fully.” And Waverly is all, “EUREKA” and she goes to the police station to FINALLY act on her emotions.

The #wayhaught ship has been sailing proudly since Nicole first arrived on scene and in one episode we got the feelings, the kiss, and the sex all wrapped in one squee-tastic scene. In a gay frenzy, Waverly closes all of the blinds like this is a life or death situation. If she doesn’t kiss this woman RIGHT NOW, she is LITERALLY GOING TO DIE. And then of course they kiss and have a heart to heart and it’s all:

Wynonna goes back to the police station, completely bypassing Nedley’s office because you know if she even had an inkling as to what was going on with her sister, she would be nosey as hell, high-fiving everyone and whistling for an audience. Dolls doesn’t exactly apologize for his earlier behavior, but he does tell her that hooray! She passed* the second assessment and now she’s reinstated and everything can go back to being like it was before. (*He cheated.) And even though everything Dolls does is suss as fuck, he bats those beautiful eyelashes and I can’t help but swoon with everyone else. 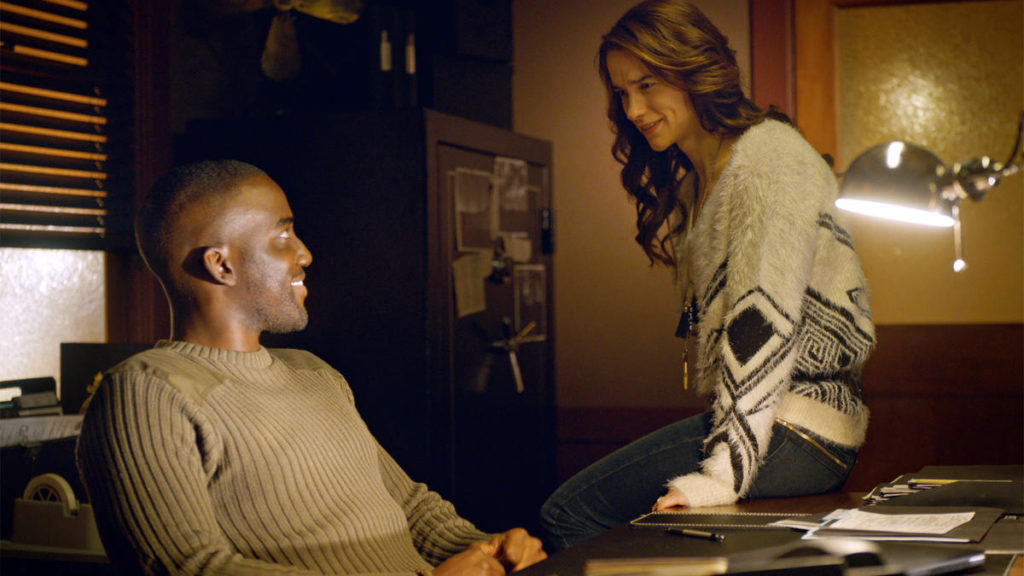 Dolls then gives Wynonna an “I’m sorry” gift in the form of a revenant and Wynonna is all, “DOLLS YOU SHOULDN’T HAVE.” She goes to kill the revenant and he shouts, “But wait! There’s more!” And he tells Wynonna that Bobo now own Shorty’s Saloon and she’s going to have to dance and get drunk somewhere else for the time being and Wynonna is pissed.