The Frasers are back in Scotland after a tumultuous time in the luxurious and treacherous France. The eighth episode, “The Fox’s Lair” offers quit the shift in tone for Outlander, changing even the opening sequence yet again to fit the main characters location. (Even if they didn’t change it, I could listen to the Skye Boat song for days.)

The most notable difference is in Claire and Jamie themselves, mirroring their relationship the last time Claire pleaded with Jamie to take then home to Lallybroch. I’m sure that for some, the Lallybroch episodes are a dull affair, acting as bridge episodes between the exciting segments of the series, but I’m a fan of the slowed down storytelling, relishing the moments where we can just watch Claire and Jamie as a couple in love, sharing stolen glances and touching one another whenever possible. 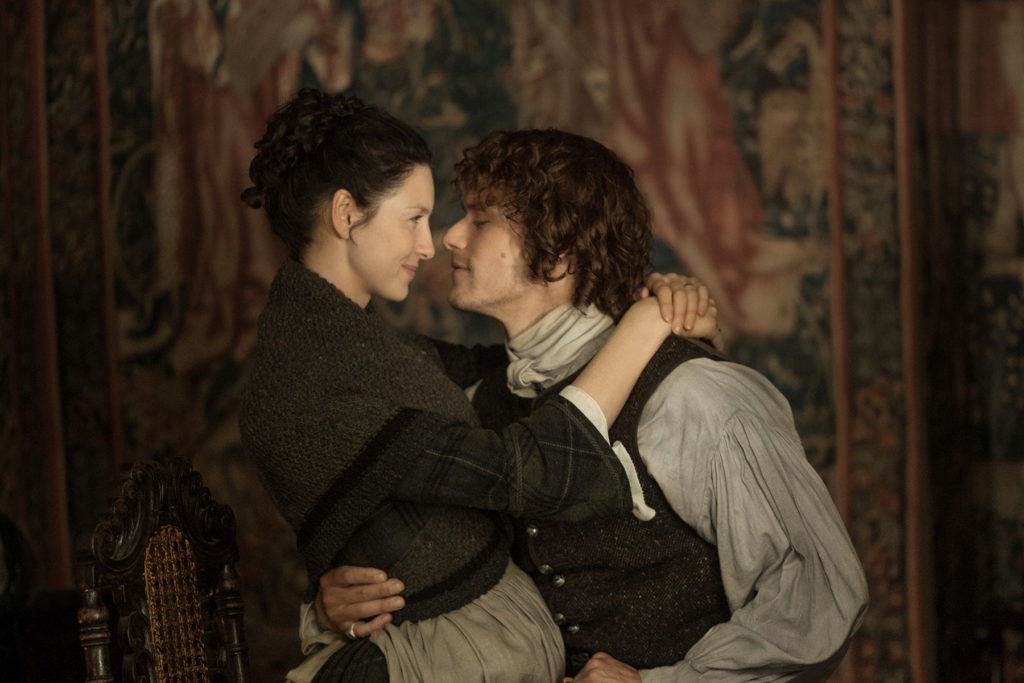 But even I cannot deny the stark contrast from France to Scotland. Everything in France was fraught with tension, every decision made by the Frasers reverberated through each social circle, culminating in the ability or inability to change one moment in history. And by the end of it all, their actions weren’t enough so the pair resigned themselves to failure in France and run back to Scotland, tails between their legs.

Fate and history seem adamant on coming to pass, however, as Jamie receives a letter detailing the Jacobite support in Scotland, with his forged signature attached to the message. This act by Charles leaves Jamie at a bit of an impasse, either support the bonnie prince in his plight to win back England and hope that he wins or hang as a traitor to the crown. Even though Claire and Jamie have run from Paris, it’s another thing entirely for Jamie to run from his family’s home, to abandon his kinsmen, so he decides to stay and fight, and hopefully change history enough so that they might one day live in peace.

It’s an odd thing watching these moments play out as we already know the outcome. We know based on Claire’s return in the premiere that they do fail again, and their presence in Scotland only makes that imminent failure that much closer. But Jamie and Claire don’t know the truth of it all yet. They still have hope, faith, that they, armed with Claire’s wits and Jamie’s stubbornness, can change history. And so they set off with a few men from Lallybroch to head to the home of Jamie’s grandsire, the Lord Lovat of clan Fraser.

Simon Fraser of Lovat is an interesting fellow, one that at first glance doesn’t seem the least bit like the lovable Jamie. Simon is a bit of a creep, a man whose word can only be trusted by what he has to gain, his flippant loyalty isn’t relegated only to politics, as he isn’t much faithful to the women he married either. This fact is obvious considering that Jamie’s father was actually one of Simon’s bastards. 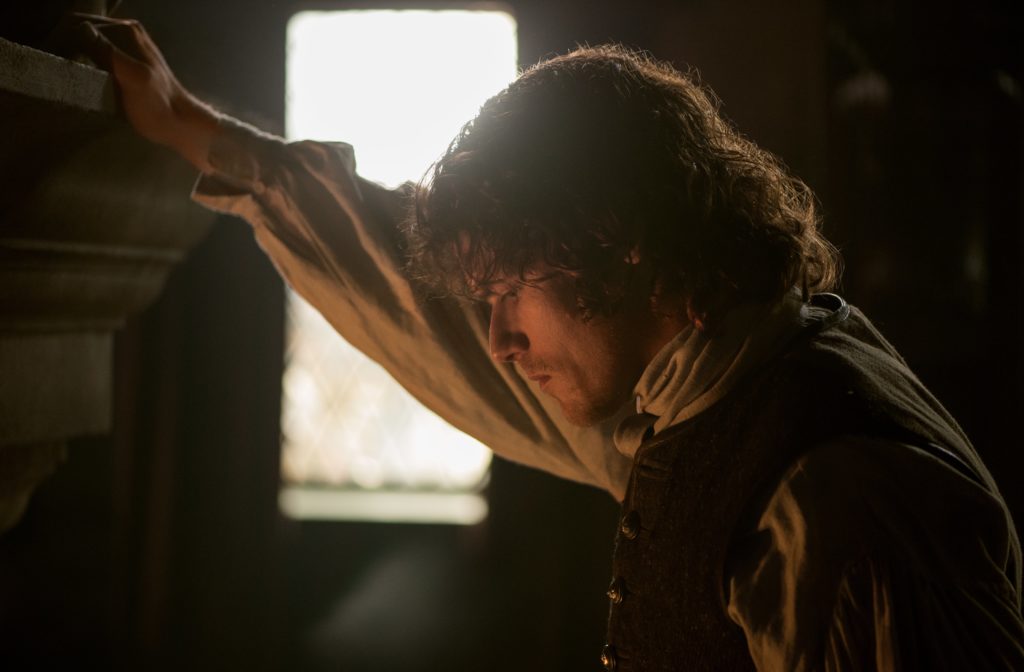 Jamie goes to Simon in the hopes that his grandfather will support the Jacobite cause and send men with Jamie to meet the prince, but he’s not alone in trying to win the support of the chief of clan Fraser. Colum Mackenzie is also at Lovat in the hopes of bartering neutrality out of the Old Fox because Colum has suffered through enough Jacobite uprisings to know that staying neutral is the only way to survive. Jamie balks at Colum’s cowardice and says he will do whatever is necessary to protect his home, family, and country.

Claire and Jamie do their best to win Simon’s favor, but the only thing he wants is something Jamie won’t give him: Lallybroch. Therefore, the pair tries to use Simon’s heir, Simon Jr., against his father, and to do so, Claire manipulates our old pal, Laoghaire, freshly repentant for her actions against Claire (proclaiming her a witch, trying to steal Jamie, just generally being awful). Claire tells Laoghaire that if she wants Jamie’s forgiveness, she’ll convince Simon Jr. that he’s stronger than he realizes, especially for standing up to his father. 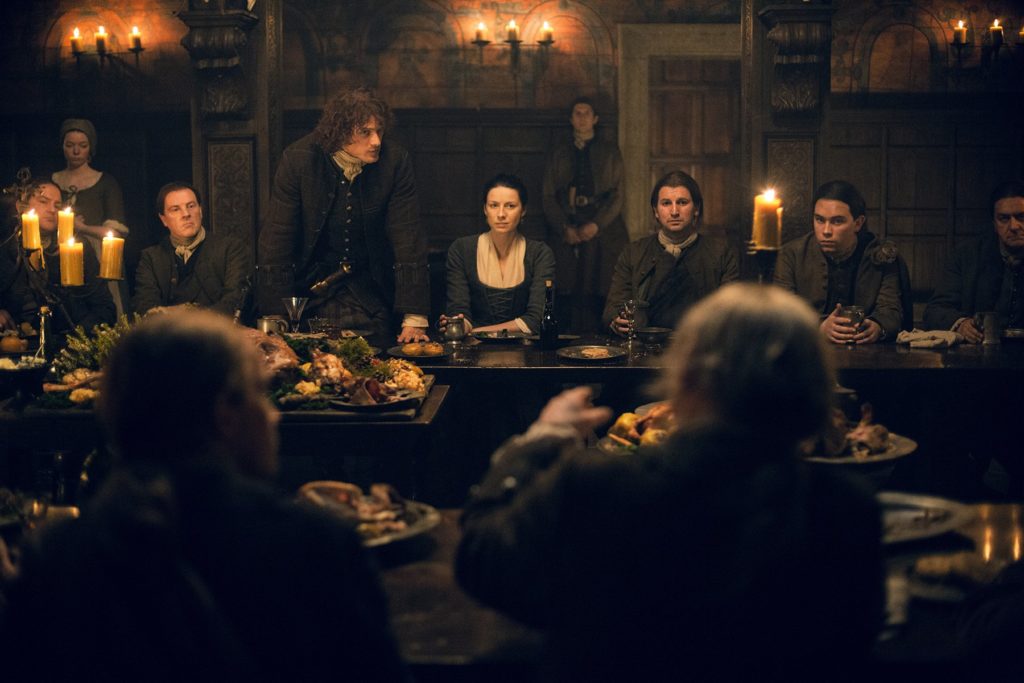 It doesn’t seem to work as Laoghaire shows off the girls and Simon Jr. runs away, but not before Claire can get valuable information from Maisri, Lord Lovat’s seer. Lord Lovat puts Jamie on the spot soon after, telling him he can either sign over Lallybroch to him and be granted his aid in the coming war or he can do nothing and Lord Lovat with agree to be neutral with the Mackenzies. Claire, using her reputation as La Dame Blanche, has a vision of the lord’s demise at the hands of an executioner. When the lord attacks her for her words, Simon Jr. steps in and stops his father from stabbing her, and gives a grand speech about allying with one’s kinsmen and fighting for their country.

The chivalrous act falls on deaf ears as Lord Lovat signs the neutrality agreement anyway, and off Jamie and Claire ride, with a dejected Simon Jr. in tow. Jamie tells Laoghaire “thank you” for her part in the matter and Laoghaire goes all “crazy ex-girlfriend” whispering that she’ll win back his love eventually, and I can’t help but loathe her return.

In the end, as the trio leaves Lovat’s domain in the distance, the lord’s army surrounds them and Simon rides out and tells him that he’s hedging his bets. If the Jacobites are victorious, his men supported their endeavor. If they lose he proclaim his son acted of his own volition, currying favor with some of the militia. Either way, Jamie and Claire head to Prince Charles with an army to fight the British.

There are many small things to love about “The Fox’s Lair”, the most of which being the intimacy between Claire and Jamie. I’m not talking about the naked times, though those are nice, but rather the quiet moments where neither needs to talk to understand the other. The highlight of course was Jamie on the sofa with the wee baby Katherine Murray, pouring out his soul to the child as Claire looked on with tears in her eyes. As a couple, they’ve moved beyond the anger and bitterness over losing Faith, and are now simply left with cold sadness, a sadness neither one feels compelled to bring up around the other, but handles in their own way.

And despite all disagreements and the rift between them the months prior, they still know one another intimately. Claire knows she’ll find a sulking Jamie in the stables, a place he feels safe and comforted with the monotony of labor. The couple trusts the other even more now than when they did prior to Black Jack’s assault on Jamie. Claire doesn’t need to watch over Jamie around Laoghaire anymore than he needs to protect her from Simon Fraser. They know the other is strong and they trust in each other’s decision making. In the end, it’s that infallible trust that gets them the aid they need to survive.

There isn’t another show on television right now that depicts a long-term relationship in such a believable and romantic fashion as well as Outlander. Sure, it’s fantasy and historical, but their relationship is one us hopeless romantics can see ourselves in. We know what the future holds for this pair and it breaks my heart to imagine them ever parted, but for now, I cherish every second I get with together.

Previous article
‘Wynonna Earp’ – “Bury Me With My Guns On”: #Wayhaught Celebrate
Next article
‘Game of Thrones’ – “Blood of my Blood”: Reunions For Everyone!