‘Game of Thrones’ – “Blood of my Blood”: Reunions For Everyone!

This week on ‘Game of Thrones’: Bran dashes through the snow, Arya gets a job offer, Tommen is the worst.

Spoilers through Game of Thrones 606: “Blood of my Blood.”

Does no one honor their commitments anymore? I mean, honestly, the characters on Game of Thrones have lost their ability to stick with a bad situation and instead have opted to run away to something better. Jaime runs away from the Kingsguard, Bran runs away from the wights, Arya runs away from the Faceless Men. It’s dire times, my friends.

Family was this week’s theme and I guess it’s the promise of family that drives the plot forward in episode 6, if you want to get all sentimental about it. And I do because I’m a sap. If you’re a fan of the action and the stories involving dragons and doors, you might find this episode a bit lacking. But hey, this was definitely an episode that set up a lot of big moments so the pay off should, theoretically, be worth it in the end.

Also, let’s take a moment to celebrate that it has been five weeks since we last visited Dorne. Count your blessings, babies. 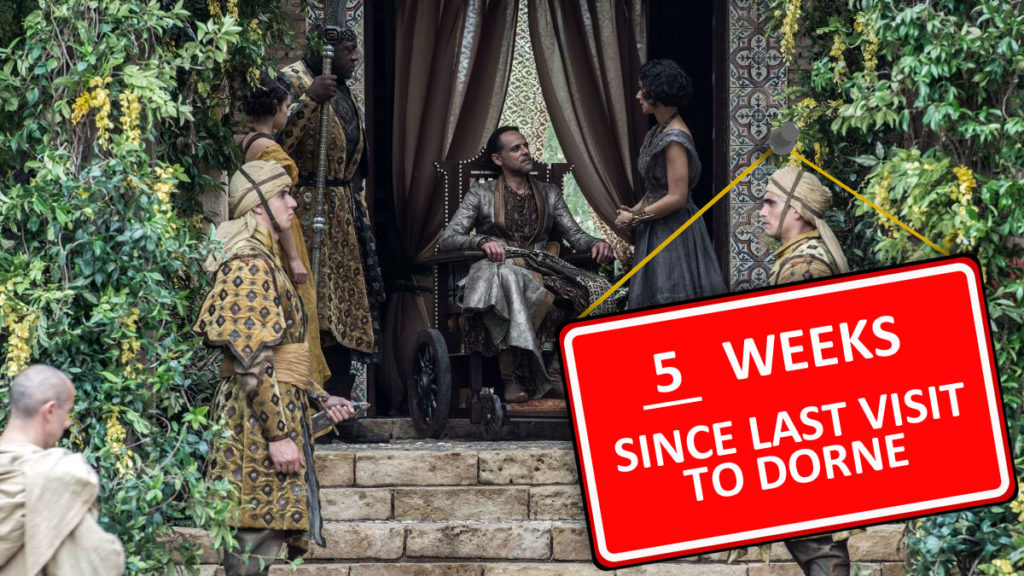 Last week ended on a crushing note and I don’t think all of the Thrones’ fandom has properly recovered. I mean, there are people out there 3D printing Hodor door stoppers. Y’all need to talk to someone about your grief; I’m here for you.

Thankfully, we only had to watch the brief recap of that moment before being thrown back into the bitter cold of the far North. Meera is putting in her time at the gym and pretty soon she’s gonna be swole as hell. 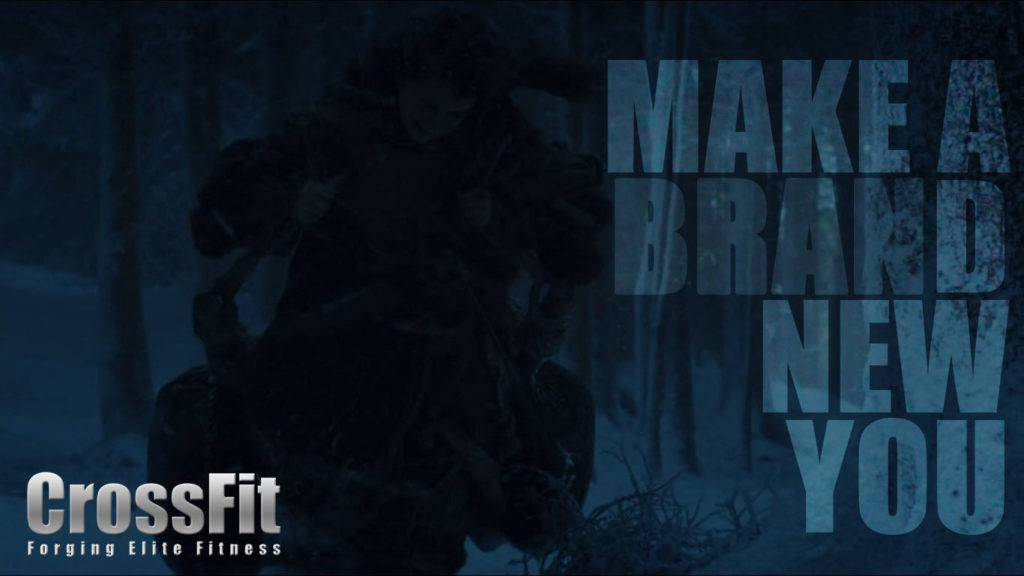 You know who isn’t a good team player right now? Fucking Bran. While Meera is dragging his comatose ass, he’s dreaming about the past, probably eating lemon cakes in another lifetime. Meera (rightfully) gets sick of his shit and stops the sled because like hell is she fending off another wight attack while he sleeps. Girl, I feel you. But have no fear! A stranger arrives with a fiery ball and chain–and Meera’s all where the eff do I get one–to fend off the wights who were marathon runners before they died. He picks up the two teenagers and they ride off into the sunset to eat rabbits and do arts and crafts with blood.

Bran drifts in and out of his visions because he’s still hung over from that rager he had last night in King’s Landing where the Mad King Aerys said to “Burn them all!” You had to be there, I guess. Anyway, the mysterious totally-not-Coldhands stranger reveals himself and GASP OH MY GOD I AM SO SURPRISED it’s Uncle Benjen! Bran looks absolutely unfazed by the reveal and book readers everywhere grumble at his ungrateful ass. THAT IS A STARK. YOU RESPECT YOUR ELDERS, BRAN.

Benjen mentions that he and the Three-eyed Raven have been homies for a while now and every fan of the series is all, “You don’t call…you don’t write…” Come on, Benjen. At least Robb sent a letter before he died. Well, Book!Robb did. I dunno what that fool on the show was doing. JK JK.

Oh behbeh Arya. Look at you with your little caterpillars on your head. How sweet. Now get to killing that nice lady before J’aqen goes all stabby on you. Because Braavos doesn’t have good cable TV, Arya watches the The Young and the Lannisters’ third act, in which our hero, Joffrey, dies. Arya laughs at his death and you have to wonder the damage she would do if she were the Stark given greenseer abilities. 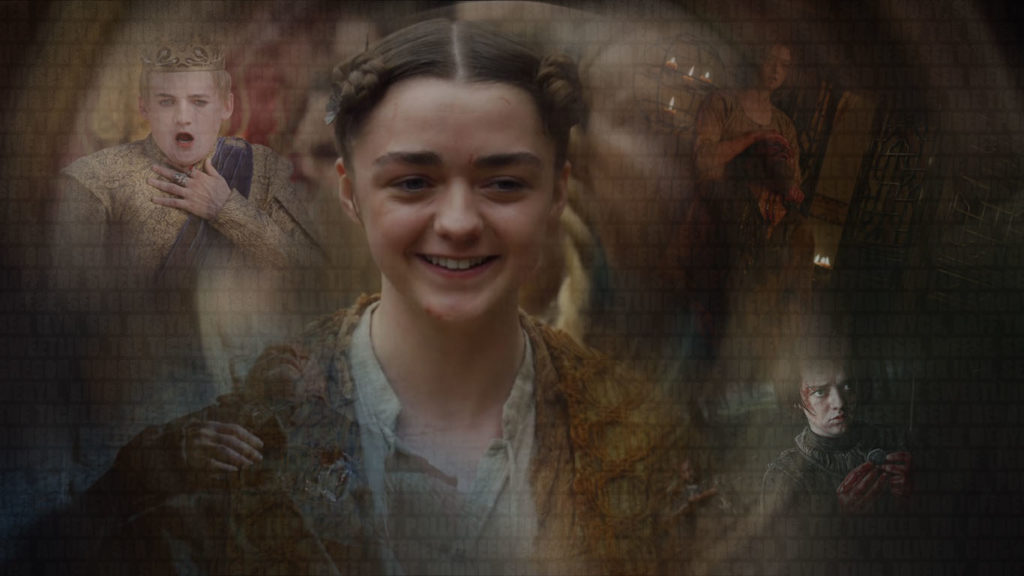 Arya goes backstage again because the traveling show has security like S.T.A.R. Labs and she can just do whatever she wants. She and the actress formally known as Cersei share a moment and Arya remembers what it’s like to have a mother again, or at the very least an older female figure not trying to kill and or marry her off to someone. It’s an endearing scene and serves as a spark to remind Arya that no matter how many times she proclaims she is “No One”, she cannot kill an innocent person. In the end she saves the life of Cersei’s actress and high-tails it out of there to find Needle, setting up a final battle between Arya of House Stark and the Waif of House Hits Blind Girls.

Somewhere Out West in a Place Named Horn Hill

I didn’t want a Sam plot this week. I could have done without the Sam vomiting into a bucket scene a few weeks ago and I had zero interest in watching him return home to explain his complicated relationship to his parents. He and Gilly have a super uncomfortable with the Tarly family and Randyll Tarly does not hold back when it comes to berating his eldest son. You’d think for dude so concerned about making his son into a “man” he’d at least be like, “Well, you had sex. Half a high-five, pal.” But no, nothing.

I’ve been in the situation Sam was in at dinner and it’s not a fun place, so I respected the hell out of Gilly for standing up for Sam. Everyone at the table minus Randyll seemed to appreciate her concern for Sam as well, even getting the support of Mama Tarly, Melessa. Randyll tells Sam that he’ll put Gilly in the kitchens and take care of the bastard child, but that he’s never to be seen at Horn Hill again and so help him if he ever sees Sam eat a piece of bread again, there will be hell to pay. Sam says his goodbyes to Gilly and the wee baby Sam and leaves. Two seconds later he turns around and he’s like, “No, wait. Fuck that dude. He’s a dick. We’re leaving and taking his totally unguarded Valyrian steel sword, Heartsbane, too.”

I can’t see this ending badly for Sam, at all.

Tommen is an idiot, thatisall.

Okay, but seriously, things are heading from bad to worse in King’s Landing. Not only are the Lannisters and Tyrells working together but Mace Tyrell has a goddamn feather duster on his head and people let him leave the house. Look at this shit. 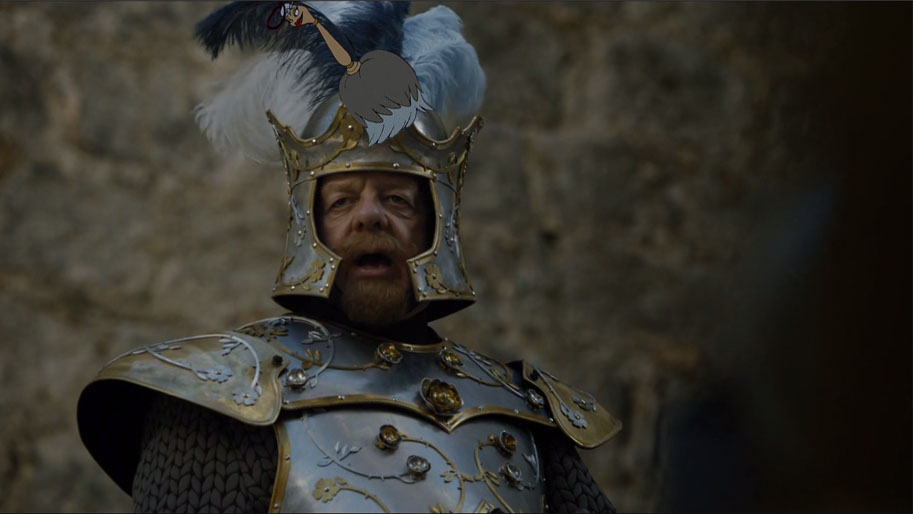 The Lannisters and Tyrells, led by Jaime Lannister head to the Sept to free Queen Margaery before she goes on her walk of atonement. Before Margaery heads out, she gets to brush her hair and give Tommen a good squeeze. Tommen, who is naive as fuuuuuuuuuuuuuuuuuuck, agrees to meet with Margaery before her walk, thus giving both the Sparrow and Margaery time to manipulate him. Remember before when I said that the Sparrow let Margaery see Loras to break her instead of him? Well, I hope I was wrong and that instead, Margaery caught on his shenanigans. The Sparrow is clever, but Margaery ain’t no simple flower. She’s been trained by the Queen of Thorns. She knows that her way out is through Tommen. By choosing her words carefully and letting him assume she is now a woman of the Faith, she’s conned him into essentially taking her place.

Now she doesn’t have to do the walk of shame, but what she didn’t count on was the Lannisters and Tyrells teaming up to muscle out the Faith. Tommen allying with the Sparrow and the Faith puts the two great houses of Westeros in a bit of pickle, as now they have to sulk back to the Red Keep. Also, a word of advice, Tyrells, the Sparrow very clearly has control of the people of King’s Landing. Turning your backs to the thousands and thousands of peasants to face a dozen Faith Militant is not a smart idea. I wonder if that line of thinking comes back to haunt either house at some point.

Jaime, now disgraced by his nephew/son is removed as Lord Commander of the Kingsguard, and sent off to handle things in Riverrun, where the Blackfish is stirring up trouble. I know Tommen is a child king and I can’t expect him to make the best decisions, but it’s incredibly infuriating that all of the adults around him (Kevan Lannister, Mace Tyrell, Jaime) are made into simpletons just so that he can continue making stupid choices to advance the plot. It’s a sad day when we’re wishing that either Tywin or Joffrey were still alive to handle the nonsense that is the Faith Militant.

Dear HBO, I love Dany. And unless she’s directly responsible for the death of Sansa, I will always love her. How-to-the-ever, can we pleeeeeeeeeeeeeeeeeeease have her do something else besides give inspirational speeches. Don’t get me wrong, home girl Emilia Clarke does wonders screaming in a foreign tongue. But we need more from her. We need more than the same story of “I’m going to take this army whose love I’ve earned and sail them to Westeros to take back what is mine with fire and blood.” I love strong Dany. I love Dany riding a dragon. But I’ve seen it all before. Take those CGI funds you used on Drogon in that final scene and GIVE ME BACK SUMMER. 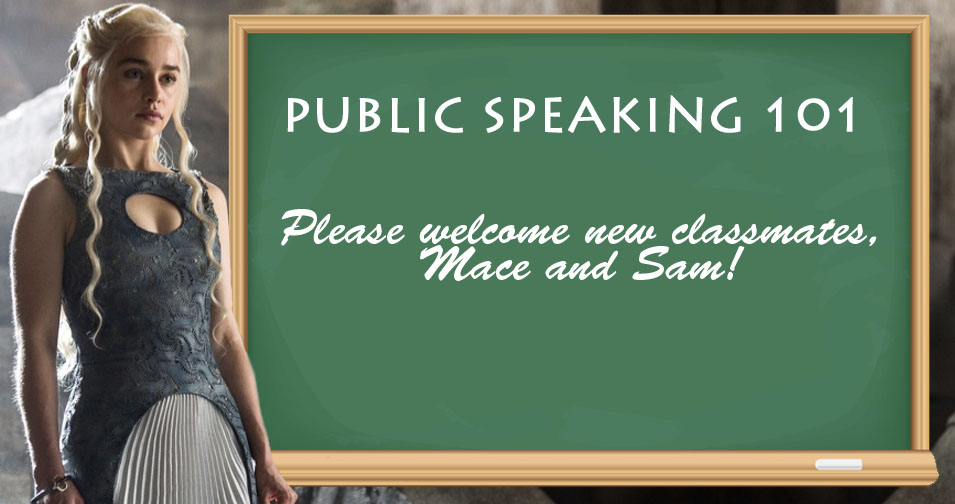 Bran will finally make it to Castle Black and he’ll be all, “Jon! Jon! You’ll never guess who I saw! Uncle Benjen!” And then Jon will stab Bran for his mockery and we’ll all cheer because I’m getting sick of his ass.

Things Bran saw in his visions:

I have an issue with the House of Black and White. It’s supposed to be the place controlled by the Many-Faced God and instead it’s essentially a house of assassins, willing to be sold to the highest bidder. I’m not surprised, I just expected more. But….it is in the name. Black and white, cut and dry, bought and sold, kill or be killed.

SAM’S MOTHER IS LOVELY. She took Gilly and her baby in without hesitation and even after learning that her son was in love with a wildling, she defended her against her brutish husband. Sigh. Which means next week her head is on a spike because that’s how Game of Thrones operates.

I’m glad we skipped the whole training montage between Dany and Drogon. Watching her collect all 8 gym badges would have been awful. 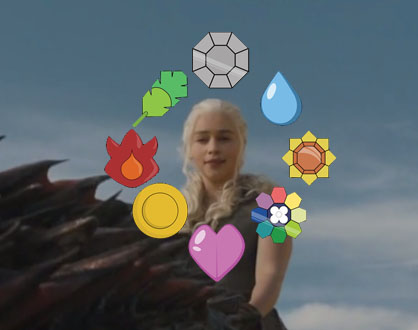