‘Wynonna Earp’ Is Back With Kickass Premiere: “Steel Bars and Stone Walls”

This week on #WynonnaEarp: Doc loses his hat, the black goo affects Waverly in strange ways, the team tries to rescue Dolls, Nedley is the MVP.

Here we go, y’all. Another summer, another season of Wynonna Earp. (Here’s hoping I’m saying that for a few more years to come.) I teased a bit about season two last week but now I get to talk about the real deal.

Season two’s premiere of Wynonna Earp starts off on the heels of last season’s finale with Waverly shooting at a demon straight off the set of Stranger Things. Wynonna shows up and shoots the flower-faced monster in its petals, but not before the creature eats Doc’s hat. Of all the losses we’ve suffered on the show (Bobo RIP), I mourn the loss of Doc’s hat the most. Dolls mentions it later but boy does Doc look naked without it. Tim Rozon has a lovely scalp and head of hair but he needs something there. Maybe later in the year Doc will have a Pretty Woman montage where he tries on different styles of headwear and then just opts for a manbun because that seems like the kind of thing that would irritate Wynonna. 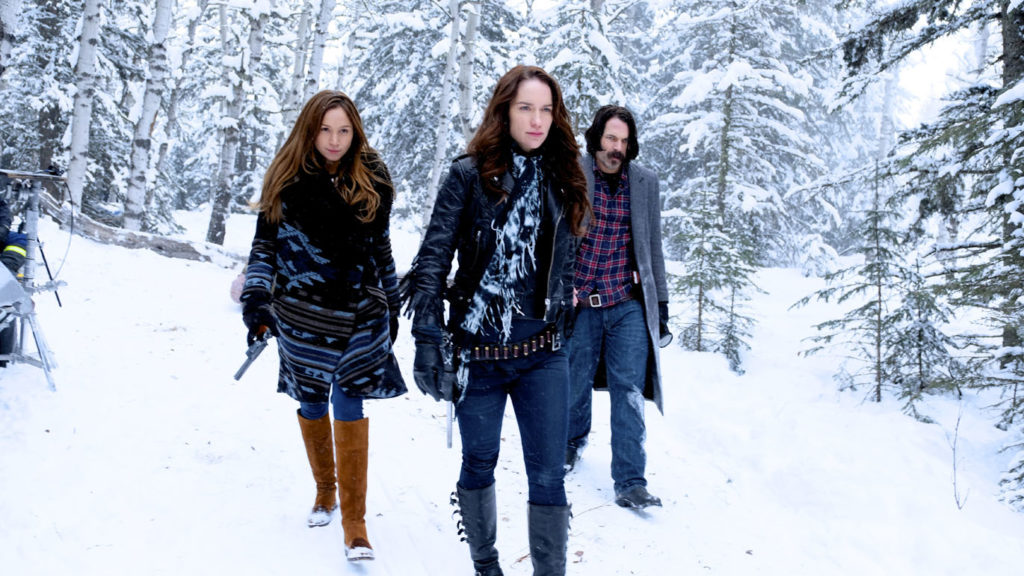 Purgatory is all a tizzy because Bobo went and poisoned the town’s alcohol supply and that goes against one of their major commandments as a people. Sheriff Nedley tells the FAKE NEWS media that Bobo was a jilted lover of Wynonna’s and he sought revenge on her for shunning him. The media, shockingly, still looks at Wynonna as the criminal and but thankfully, Nedley seems ready to cut anyone who comes after his girl with the good hair. The pair share a great moment where Nedley confesses his love for Uma Thurman in Batman (natch) and then once Wy realizes the Black Badge Division has infiltrated the PPD, they have this amazing exchange:

Wynonna realizes she hasn’t properly stalked vetted her lover Dolls and she breaks into FOUR motel rooms to find out which one is his. Knowing Wynonna, I bet Nedley called ahead to the motel and warned the staff not to interfere with Wynonna’s dealings. Sure, the motel manager offered a key but Nedley shushed him and said, “No, no. Let her have her fun. Breaking and entering is how she grieves.”

Wynonna has several great one liners during this scene and seriously, Wynonna Earp and Co. has really upped the funny this year. Only fifteen minutes into the episode and already I’ve had to cut at least half a dozen quotes from my review.

Wynonna finds a hot girl in her underwear in Dolls’ room so naturally, by the laws of all things good and pure, they must wrestle. Poor Wynonna loses the fight but the hot girl, Eliza, turns out to be a pretty cool chick.

Wynonna: “Wynonna Earp, tho?”
Eliza: “He never mentioned you.”
Wynonna: “Well, uh, you have amazing taste in underwear.”

The Wayhaught To My Soul

I’m so glad Wynonna Earp started the Wayhaught super early in the season. There’s been talk of a rough patch for the lovers and since my Supercorp ship didn’t pan out, I’m going to need all the girl kisses on screen I can get. However, it’s not all “chicks dig scars” for Wayhaught. Wavylays tastes different and Nicole is suspicious as hell of her little cupcake. Unfortunately, the kissing stops because Doc needs sweet tea and he’s a gentleman who loudly announces his presence so as to give the ladies time to cover up.

I’ve always loved Doc. I know that Wynonna is firmly Team Dolls right now and I don’t blame her (Shamier Anderson is SO pretty), but I adore Doc’s relationships with all of the other characters. He’s protective of Waverly, respects Nicole, and even though he’s jealous of Dolls, he still tries to save him for Wynonna’s sake. And of course he’s desperately in love with our heroine.

Wayhaught gets a few more cute moments throughout the episode, like Nicole teasing Waves’ British accent (hilarious considering Dominique Provost-Chalkey is British). There’s a tense moment where it seems like the demon goo causes Waves to turn against Nicole, but like the gun shot at the end of season one, it’s a fake and Waverly only cuts off the head of the Stranger Things monster.

The real Wayhaught moment comes from Nicole as the group is planning their Dolls rescue attempt. Nicole wants to be called Agent since Dolls deputized her before he was rudely whisked away, but everyone, Waverly included brushes off this announcement. Only Doc has her back and concedes that she was indeed made an agent. Nicole is seeing a shift in both herself and in Waverly and it’s causing a small rift in the couple. Nicole is tired of being lied to, tired of having to sit on the sidelines because she’s not an Earp or some kind of fantastic science fiction anomaly. I imagine this feeling of uselessness (exacerbated by not being included in the BBD contract later) will further divide our favorite gay pairing. DUN DUN DUUUNNNNN.

Dolls’ rescue squad is comprised of FOUR females and Doc Holliday. I want you to let that sink in. FOUR. KICKASS. WOMEN. LEADING. THE CHARGE. Thanks, Wynonna Earp.

Wynonna introduces Eliza to the group and several things immediately happen: Doc unsuccessfully tries to woo Eliza, fails, and then Wavylays is all, “Friend? OH, FRIEND” (reminding us that adorable Wavycakes is still in that body and she’s not all kinky demon.) Doc, looking from Wynonna to Eliza and assessing the situation, completely unfazed after being shutdown, is all, “Haha, boy, this is so awkward for all of us.” Eliza, however, proves that buys absolutely no shit from anyone in the room and she quickly lets Doc know that she’s no fool and she’s well aware that he’s THE Doc Holliday.

We learn through the several exchanges between Dolls and Lucado that Dolls still has pull within the BBD because he managed to call off Lucado’s air strike against Purgatory. We also learn that Lucado is a wee bit pissed at Dolls because he survived an attack where her husband died. You can tell that Dolls and Lucado were once close friends but that history is tainted by the death of her loved one and now, it seems, Lucado has lost all faith in her ex-friend and has taken up a new “scorched Earth” policy regarding anything that might cause the world harm.

Also on the syllabus for the hour was learning about Dolls’ werewolf-like condition. Eliza informs the intrepid heroes that BBD “made” them and it seems the drugs are just another way to keep their “creations” under their control. Wynonna is all, “Eh. I’ve been with worse.”

Eliza: “There’s a really good chance Dolls won’t be able to control it.”
Wynonna: “I will prepare for that and I will take care of it.”

Can we PLEASE talk about the way Doc looks at Wynonna during this moment? He KNOWS in that moment that he is most definitely second in her heart but instead of becoming jealous or angry, he resolves himself to help Wynonna carry her burdens. Wy has already had to put down her sister and Bobo in the past 24 hours; killing Dolls, too, might be the move that absolutely breaks her, so Doc, once Wavycakes gets the locks open, locks Wy and Eliza back in the stairwell so he can be the one to “take care of” Dolls should he need to Old Yeller the poor dude.

I love Dolls, too, but yeesh, Doc. You’re breaking my heart.

Waverly, in an attempt to be badass, accidently lets loose another Stranger Things demon, while also scaring the poop out of baby dude Jeremy. Wynonna shows up in time to rescue Wavycakes, thank goodness, but it doesn’t matter because the Earp and Co. Rescue Squad gets picked up and wrangled by the BBD anyway.

Thankfully, Doc manages to rescue Dolls in a total bro moment, giving him enough medicine to see him escape from the facility and live to see another day.

The BBD boss man shoots Eliza in the head to prove he’s not a pushover like Lucado who only threatens chaos and destruction. In the end, the entire crew, sans Nicole but including Lucado and Jeremy, is forced to sign a contract in blood whereby they are required to work together to rid Purgatory of its demons.

I’m sure that won’t go poorly for them at all.

I was bummed to lose Eliza so early because she and Wynonna had such great banter.

Wynonna: “I thought you were good in your underwear.”
Eliza: “You should see what I can do naked.”

Though I understand that it was necessary for the show to prove that the season, and the BBD, don’t mess around. Eliza wasn’t QUITE expendable, but she was a liability. There were things she probably knew about Dolls and the BBD that would keep him alive longer and right now, they want Dolls gone.

Wynonna is dealing with a ton of emotions by the end of the first episode. Once she’s hit the point where she feels she can bear it no more, she throws herself at Doc thinking that she’ll heal the way she’s used to, by drowning the emotions with sex, but Doc turns her down (he’s a gentleman and he loves her too much) and Wynonna is forced to get the emotions out the old-fashioned way. She feels responsible for every bad thing that’s happened, even if it wasn’t her fault or they were the only options available at the time. She’s hard on herself in a way that’s admirable and frustrating because I adore her and don’t want to see her suffer.

God, I love this show.