Hogan is currently embroiled in a $100 million dollar lawsuit with Gawker Media over their release of a video tape from 2006, showing Hogan having sex with Heather Cole, the wife of radio personality “Bubba, The Love Sponge”.

Hogan seemed to have WWE’s unwavering support throughout the ordeal — until now.

Sealed transcripts of the tape’s contents have been leaked by The National Enquirer and Radar Online, purporting to show Hogan declaring himself to be “racist to a point” while referring to black people as “fucking n***ers”. The remarks are in reference to a “black billionaire” who promised to fully fund the singing career of Hogan’s daughter, Brooke. According to the transcripts, Hogan complains about Brooke’s relationship with the man:

“I don’t know if Brooke was f*cking the black guy’s son,”

“I mean, I don’t have double standards. I mean, I am a racist, to a point, f*cking n*ggers. But then when it comes to nice people and sh*t, and whatever.”

“I mean, I’d rather if she was going to f*ck some n*gger, I’d rather have her marry an 8-foot-tall n*gger worth a hundred million dollars! Like a basketball player!

“I guess we’re all a little racist. Fucking n*gger.”

Despite the fact that the transcripts are part of a group of sealed court documents, both outlets stand by the authenticity of what they’re reporting. The Enquirer stated that an “an extensive news probe uncovered five independent sources who provided the dramatic contents of the tape to this publication.”

Meanwhile, wrestling fans woke this morning to a WWE organization without Hulk Hogan: the company has wiped nearly every reference to him from the official site. He’s no longer listed as a Hall of Famer or a WWE Alumni. All of his merchandise was taken offline as well.

In the storm I release control,God and his Universe will sail me where he wants me to be,one love. HH

Several news outlets reached out to WWE — who remained silent on their reasoning for the erasure. Because of this, fans rushed to find their own answers, initially speculating that the deletion was because of an XM Radio interview Hogan gave for DJ Whoo Kid’s Whoolywood Shuffle back in 2012.

In the interview, Hogan recalls the famous WCW TV spot where wrestling personality, Booker T inadvertently called Hogan a “n***er” and then revealed that Booker and several other black personalities would start call him “n***a” backstage as a joke.

Hogan would go on to reflect on his time in Miami when he’d bump into famous rappers:

“And everybody down there—Lil Wayne, Birdman—they’re all calling me ‘nigga,’ and then I started sayin’ it. And I always said it, but now all of a sudden I get heat when I say it, and they say, ‘Hogan, you can’t say that,’ so I say, ‘Why can they say it to me then?’”

In response to the uproar, DJ Whoo Kid posted this statement on his personal Facebook: 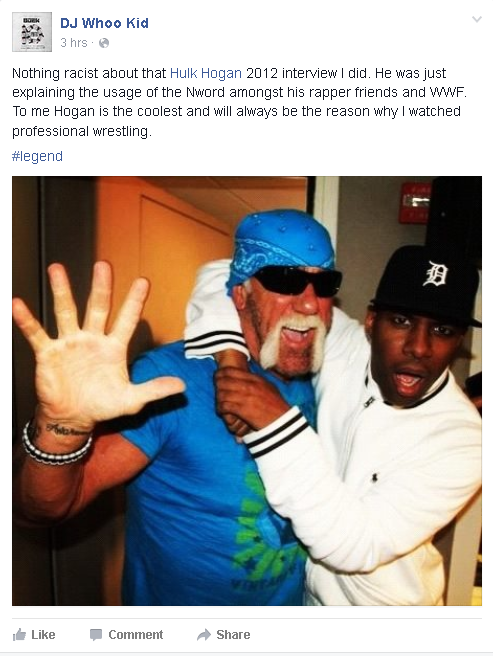 About two hours after The Enquirer and Radar released the transcripts, WWE finally made a statement about Hulk Hogan to US Weekly:

“WWE terminated its contract with Terry Bollea (aka Hulk Hogan). WWE is committed to embracing and celebrating individuals from all backgrounds as demonstrated by the diversity of our employees, performers and fans worldwide.”

TMZ, who also claims to have seen the tape and confirms the authenticity of The Enquirer and Radar’s transcripts, says that WWE did not terminate his contract and that Hogan resigned from WWE late Thursday night.

A few hours after the story broke and WWE had announced the separation, Hulk Hogan finally released a statement to People Magazine, saying the following:

Eight years ago, I used offensive language during a conversation. It was unacceptable for me to have used that offensive language; there is no excuse for it; and I apologize for having done it. This is not who I am. I believe very strongly that every person in the world is important and should not be treated differently based on race, gender, orientation, religious beliefs or otherwise. I am disappointed with myself that I used language that is offensive and inconsistent with my own beliefs.

This all may be well and good but , according to Scott Keith of The Sporting News, WWE is not a stranger to controversy and uses instances like this to grandstand:

…this sudden case of moral aggrandizing from WWE comes about because Gawker leaked yet another sex tape with Hogan, which not only showed him to be an adulterer, but now also a racist…Hogan used the N-word multiple times while talking to or about his daughter…putting aside the nature of the comments and Hulk’s questionable parenting skills there, it does seem a tad hypocritical for WWE to fire someone by taking the moral high ground over racism. For as much as they claim diversity now, they don’t exactly have a good track record of positive portrayals of other “backgrounds.”

The release of the transcript is already creating a ripple effect in WWE. According to a report from US Weekly, Hogan will no longer be featured as a judge on USA Network’s “Tough Enough” and his much-rumored match with John Cena at WrestleMania 32 is in jeopardy.

@theworkprint
Follow
Previous articleMore ‘Splatoon’ Is On The Way
Next articleTelltale Reminds ‘Game of Thrones’ Fans That No Matter the Universe, No One Is Safe in Westeros