‘Wild Women of Planet Wongo’ is a Fun Escapist Ride

Planet Wongo is a world populated by statuesque women clad in glittery green suits, high silver boots, and head of tall purple hair. But don’t be fooled into thinking that they are all about fun and games here ladies and gentlemen, for something untoward is afoot!

If you’re a fan of science fiction, immersive theater, drinks, and hilarity, Wild Women of Planet Wongo is an experience worth adding to your life. While the space at the Parskide Lounge in the Lower East Side was a little tight for the interactive performance, it did lend to a cozy atmosphere as audiences became a part of the show. We begin on a strange planet where a spaceship has crashed. Captain Ric Rogers (Miki Hellerbach) and his companion Louie LaFever (Howie Schaal) are arguing when beautiful warrior women arrive, excited to have suddenly come upon them. The captain is immediately distrustful, but Louie is more than willing to get to know the natives a little better. Soon the planet’s ruler Queen Rita (Amanda Nichols) makes her entrance and Ric is smitten despite himself. However the duo soon find themselves in dire straights, becoming drugged with Wongo Weed then captured and taken to the queen’s palace. Chaos and merriment ensues as the two sexes attempt to communicate and understand each other through song and dance.

The show is reminiscent of sci-fi films from the 1950’s and 60’s it felt like being in an episode of Mystery Science Theater 3000. Once you enter the lounge you can grab a signature Wongotini at the bar and then commence in audience participation throughout the performance. During the first intermission three attendees were able to become apprentice Wongettes and practice some of the warrior womens’ signature moves on an unconscious and chained up Louie. In the second one, we were treated to a hilarious Wongo version of the dating game. Audiences also got to join in on the fun throughout the night by dancing, singing, bowing, and even picketing. The cast did a splendid job in working with the space and engaging with the theatergoers. 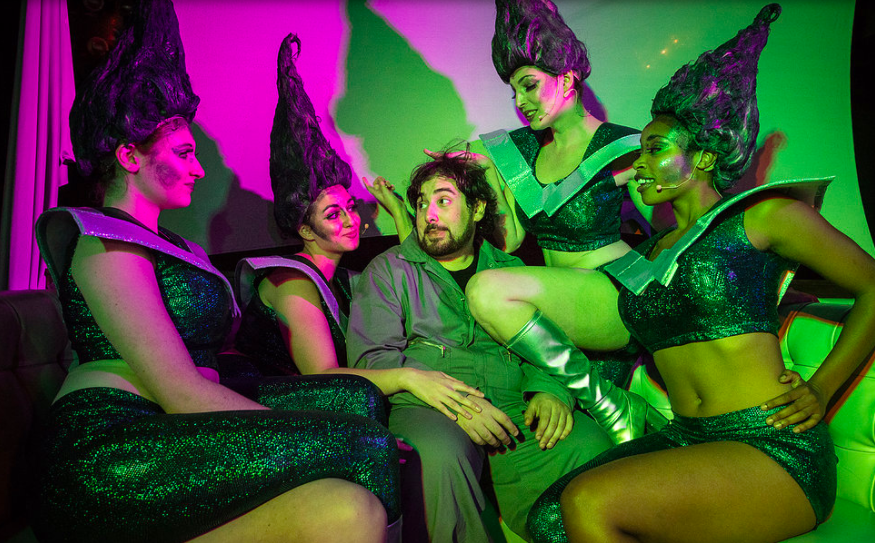 While immersive theater is nothing new with shows like Sleep No More, Wild Women of Planet Wongo is lighthearted fun and immensely entertaining for those looking to have a break from the normality of everyday life. You’ll laugh a lot and the Wongotinis don’t hurt either.

Wild Women of Planet Wongo is in its third run through June this year. It originally debuted in 2015.

Previous article
Syfy is “Rebooting” Ahead of its 25th Anniversary with a Renewed Commitment to Genre TV and Fans
Next article
‘Iron Chef Gauntlet’ recap: ‘Five Ingredients’