Last week, we lost Chef Nakajima which, in my opinion, destroyed all of what this show had going for it. This week, there’s a twist: two chefs will go home and the winner of today will face off against the three Iron Chefs, Masaharu Morimoto, Bobby Flay and Michael Symon. Let’s dive into the penultimate episode…

These are the three remaining chefs on Iron Chef Gauntlet…

The three chefs enter the stadium. Izard is out for blood, having been put through the stress of facing Nakajima last week and piling a bunch of shit on a plate which the judges gave her high marks for. She’s “ready to kick some ass” and is gunning for Chef Dady since he put her in that position. Dady says he has momentum and that he’ll be the next Iron Chef. Grueneberg says she isn’t going home today.

Alton Brown announces that the loser of the first round will go home. He says that being an Iron Chef requires focus and willpower. The Secret Ingredient Coffin contains nothing but empty baskets. Brown says that the chefs will have access to “every single ingredient in the kitchen”! But, they can only choose five of them which is a lot like saying “I’m giving you access to $5 million dollars…but you can only have FIVE of those dollars.”

Izard is confused. Dady and Grueneberg love it. They have 30 minutes. Go-time!

Dady is doing a salmon dish with asparagus with his salmon, salmon eggs, eggs, lemon and asparagus.

Izard is doing Eggs, Soy, Lemon, Crab and Mirin. It will be a Japanese dish and it’ll be a crab custard. She’s “never made this before” because that’s what Iron Chefs do. Not really, though. They usually know what they’re gonna cook.

Alton approaches Grueneberg about her pasta because “he doesn’t know what she’s doing” and it’s “killing him”. Grueneberg is apparently making fresh whey for a pasta filling which gives us this exchange:

It’s like a Seinfeld bit threw up and leaked into the show.

Meanwhile, Izard’s Crab Custards won’t set. Ruh-roh. Izard removes the lid of her Dutch Oven over and over to confirm this. Something tells me that custards don’t set when the heat escapes the oven they’re in…but Izard’s smarter than everyone and everyone knows she’s gonna win this, so fuck off. Also, she says she “wants to cry” which is the kind of iron-clad confidence you love in an Iron Chef.

Alton notices all of this and says “the sphincter factor is very high right now”, which is just the phrase I want to hear in a kitchen. Izard keeps removing the lid over and over much to Alton’s dismay — but he doesn’t yell that to her because yelling things like “your ass is puckering” is much more appealing.

Grueneberg is rolling her pasta while Dady works on his eggs. Izard has one minute left and pulls her custard from the pot they were in. Everyone plates, time runs out and it’s time for the tasting…

Everyone is stoked about their dishes while Dady whispers “I’m gonna get destroyed” to Izard…and this is Izard’s actual reaction:

Dady looks incredibly nervous and says that may be what sends him home.

Alton picks his most successful chef for the challenge is…

The chef who will go home is…

Dady walks out. In his post-interview, he looks incredibly upset and says that he’s disappointed and says he hates losing. HATES IT.

It is now Chef Izard vs. Chef Grueneberg in the final challenge for the right to go to the Iron Chef Gauntlet round.

Izard whines about doing an egg dish prior to this and says that she’s “EGGHAUSTED”! Get it? Because she’s tired of cooking eggs? Can’t wait for Iron Chef Izard, can you? Alton starts the 60-minute timer and the ladies start grabbing some eggs…

Grueneberg’s going to cook something I’ve never heard of before: “Pasta”. Sounds exotic!

There are eggs everywhere. Grueneberg picks up Emu Eggs because they’re HUGE and contain a disgusting amount of goopy yolk. The problem? Emu’s aren’t really native to where ever the hell these guys are and they have to be shipped a certain way so the yolks don’t break. Since Food Network missed something and chose the “I Don’t Know, However You Want to Send It; Look I Have Shit to Do” shipping option, every single Emu egg yolk is broken. So, Grueneberg has to use about 75 eggs to make up for 4 of them. And then, Alton renders the entire ordeal moot anyway by telling us that nearly every single egg in the world tastes the same so, basically, Iron Chef Gauntlet is just really pretentious and stacks these things to resemble Cadbury Mini-Eggs for effect.

Izard continues to channel Nakajima and makes a Yuzu Lemon Curd while proclaiming that she’s “come too far to lose”.

One of Grueneberg’s dishes is a “giant ravioli filled with egg yolk” which is preceded by a Stracciatella Egg Drop Soup. The third dish will be Green Cardamom Ice Cream.

The ladies work their fingers to the bone.

Both women make a meringue for their deserts, something Alton loves. Grueneberg ends up having to re-do her ice cream.because the machine has turned it into butter.

Grueneberg rolls what must be her umpteenth piece of ravioli dough and says she’s doing a dish called “Green Eggs and Ham” which doesn’t look anything like it, so it’s more like “Egg and Ham Ravioli with Green Shit On It”. Still, pretty clever.

Finally, the bell rings and it’s time for the final tasting before the Iron Chef Gauntlet…

Alton gives us our judges…Ching He Huang…and…sigh…Alex Guarnaschelli, another Food Network piece of work I cannot stand…but let’s move on.

The judges make their decision.

Izard says that going home at this point would be terrible. You know, as opposed to “wonderful”.

Grueneberg can’t believe it and cries (off-camera) and she says it wasn’t her day. “There’s always tomorrow,” she remarks.

That’s it. Join us for the finale next Sunday!

THOUGHTS: Yeah, you guys all called it. Here’s the thing I don’t get: where’s the suspense? Next week is Izard vs. three “legends” (if we’re calling Bobby Flay a “legend”) and then, boom, she wins and gets to wear an Iron Chef hat. Is that really what’s going to happen next week? What happens if she loses? Does she lose and go home and we wait until next season? What happens to Iron Chef America? Does it reboot regardless of what happens? I’m sorry, but I cannot see Izard beating Symon, Flay or, for fuck sakes, Morimoto.

If she does, then this show is just for…well, show.

Also, if you’re really faking us all out and trying to prime us for Iron Chef Izard, would it be too much to ask to make her likeable and confident? The last two shows have given us an supremely insecure person who is afraid of losing all the time. That doesn’t attract me to the person nor does it make me want to watch them cook.

That’s it for now. Join us next week for the finale.

Matt Perri is one of those literary Ronin you’ve never heard of until he shows up and tells you he’s a literary Ronin. He’s a native Californian, a film buff, old school gamer geek, and a sports/entertainment fan. A lifelong Giants, 49ers and Sharks fan, he also covers the world of pro-wrestling, writing recaps for WWE Monday Night RAW and Total Divas at Scott’s Blog of Doom. You can follow the guy on Twitter via @PerriTheSmark as well as here at The Workprint and his own blog, We Hate Your Gimmick.
@PerriTheSmark
Previous ‘Wild Women of Planet Wongo’ is a Fun Escapist Ride
Next ‘Tanked’ recap: ‘Shark Byte’ 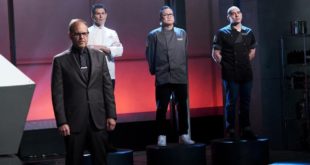 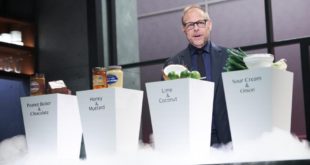 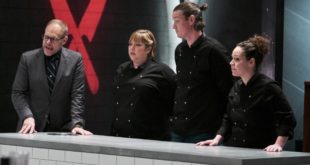 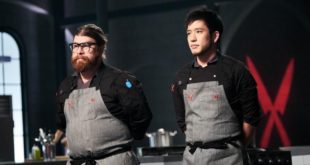