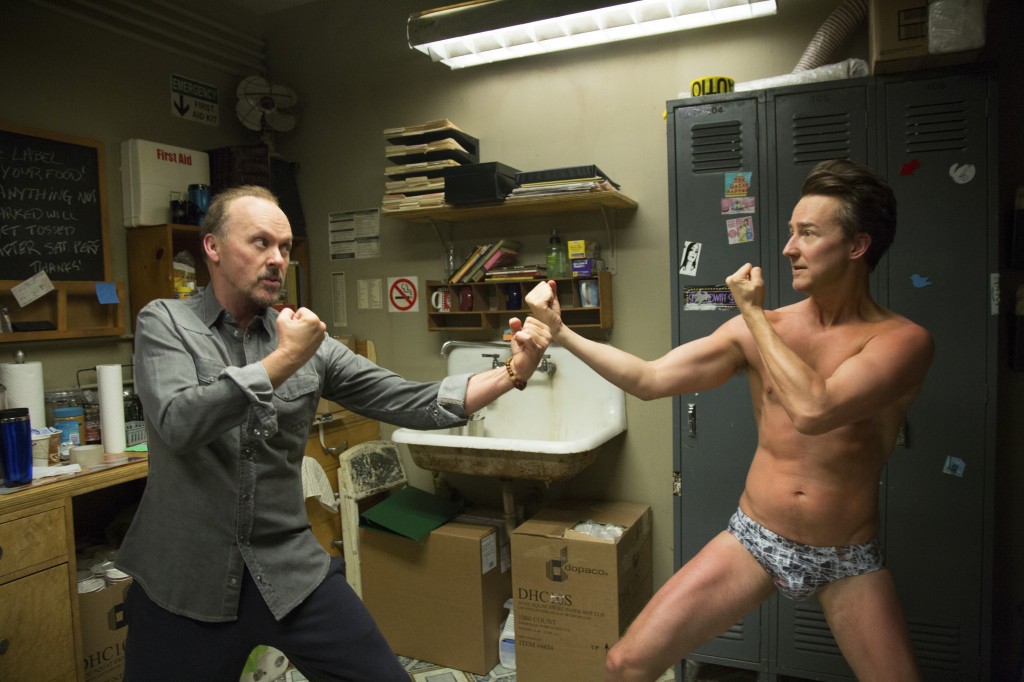 Welcome to the inaugural edition of TheWorkprint’s Weekend Wisdom! In this weekly column we’ll let you know what’s brand new in movie theaters this weekend, what’s worth your time, and what you should avoid like Ebola.

In this first installment I come bearing good news and bad news.

Good News: A strong contender for the Best Film of 2014 title is getting released!

But before you start throwing produce at me because you don’t live in either New York or Los Angeles, hear me out. The film in question is director Alejandro González Iñárritu’s Birdman or (The Unexpected Virtue of Ignorance) and it is a masterpiece.

I had a chance to view the film earlier this week and it blew me away with it’s stylish direction, exceptional performances (give Michael Keaton that Oscar now!), and screenplay full of ideas too numerous to list here.

We’ll have a full review posted later this weekend but if you’re lucky enough to live close enough to one of the theaters playing this gem this weekend, buy your ticket now! I’ll be sure to keep the rest of you informed about the film’s expansion in the coming weeks.

WHAT ELSE IS NEW?

This weekend sees three movies getting a wide release and there is virtually something for everyone…at the most elementary level possible.

For the MEN comes Hollywood superstar Brad Pitt in the manliest of male-dominated film genres: the World War II epic. Fury stars Mr. Jolie as the leader of a tough-as-nails tank team fighting Nazis in Germany. And with costars like Shia LaBeouf, Logan Lerman, and Michael Peña expect all sorts of Band of Brothers-esque bonding and intense violence courtesy of director David Ayer who still has me reeling from his excellent 2012 film End of Watch.

Reviews for Fury have been slightly mixed with a Tomatometer score hovering in the mid 70s, but those that like it seem to be singing high praises for the action sequences so I’ll definitely be giving it a chance.

Look for this to dethrone current box office champ Gone Girl (which still comes highly recommended as a delicious piece of pulp cinema).

Meanwhile, the LADIES (should I have done this first?) are getting the latest adaptation of a Nicholas Sparks novel, The Best of Me starring eternal dreamboat James Marsden and the always reliable Michelle Monaghan. The plot centers around two high school sweethearts reuniting after years apart and falling in love all over again. But surely one of them will die by the end of it.

Reviews have been pretty scathing for the film as it stands with an abysmal Tomatometer rating of 7% so I can’t really vouch for anyone to see this unless you just really need to smuggle in some Ben & Jerry’s and have a good cry.

Finally, for the KIDDIES we have The Book of Life, which gorgeously delivers a tale surrounding the myths of Dia de los Muertos. The film is a visual feast that the young ones will have a blast with but adults will quickly notice the pattern of genre tropes and cliches splattered across every frame. Proceed with caution but read our FULL REVIEW here for more detailed analysis.

Those of your preferring to avoid the movie theaters completely this weekend can rejoice in the fact that one of the summer’s best blockbusters arrived on DVD and Blu-Ray this week!

X-Men: Days of Future Past brought director Bryan Singer back to the franchise in welcome fashion with a story that combines the all-star cast of the original three X-Men films with those who appeared in 2011’s X-Men: First Class. The result is an exhilarating comic book thriller that – unlike most franchise flicks these days – tells a complete story rather than spending two and a half hours teasing movies yet to come.

Big fans of this film may want to wait to actually purchase it though. Summer 2015 will see the home entertainment release of the “Rogue Cut” which will include a significant subplot of the film that was deleted from the original version. As the name suggests, these scenes deal mostly with Anna Paquin’s Rogue character in the film’s dystopian future setting. It will definitely be interesting to see what impact these scenes have on the film overall.

And finally, this week also saw the Blu-ray release of the first season of Showtime’s excellent Penny Dreadful. I’ll admit that this isn’t a show for everyone but you really can’t go wrong when Eva Green is at her best and believe me when I say she is absolutely at her vampy best in this.