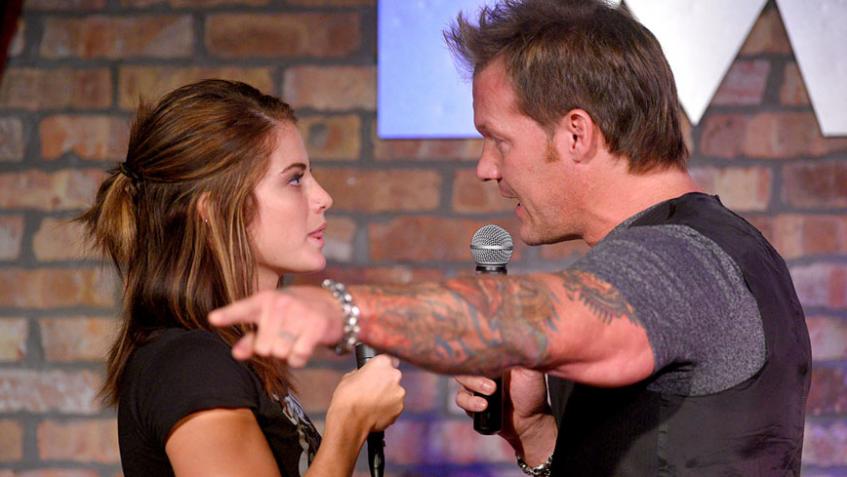 Because ZZ’s about as unkillable as the Fifty Shades of Grey franchise, Daria was sent home last week. Last week also saw all the characters trying their best to promote personalities despite the fact that not a single contestant on this show even has one, let alone a soul. Will ZZ succeed in banging at least one of the women on the show? Will we talk about his giant “package” again? Will Hulk Hogan ask the women to comment on ZZ’s package? Let’s find out…

Arena
Chris Jericho and Renee Young are here despite the ratings flop from last week. Daniel Bryan and Paige talk about their choices last week. Hulk Hogan has his eyes on “someone that needs to get out of here” because that’s what the judges do now. Jericho sends us to…

Barracks
Chelsea Green has arrived to replace that other blonde-haired chick who left of her own accord. That’s right: WWE has Tough Enough contestants on standby — and, coincidentally, they chose Chelsea Green, AKA “Megan Miller, the woman who was supposedly fucking Daniel Bryan behind Brie Bella’s back” in an angle that went nowhere — and we mean nowhere. Chelsea immediately starts moving shit around when she gets there — then has a giant glass of vodka. And, by “giant”, I mean “If 7/11 sold Vodka Slurpees”. (DANIELLE: Honestly, watching or even being on this show, I don’t blame her.)

Chelsea introduces herself as the woman who was supposedly fucking Daniel Bryan behind Brie’s back somebody who won’t quit and won’t lose. When the other contestants get there, they recognize her, then they start bitching at each other for no reason other than to bitch at one another. For Amanda and Gabi, it’s bewbz. Fake ones. Chelsea and ZZ sit there like two people on a double date with a bitter, angry couple.

After Boobgate peters out sadly, it’s on to…

The Gym
The cast is subjected to “classic” promos which include bits by Hulk Hogan, Ric Flair, The Rock and…King Barrett whose “BOOM” is considered “great” enough to be included. And, ZOMG, it’s Barrett coming to greet the cast. Sarah Lee just loves King Barrett because somebody in the cast has to overdo it with the gushing each week. (DANIELLE: “Brian Kendrick?! OMG, I LOVE BRIAN KENDRICK! He’s only the greatest EVER!!!”) Barrett does a promo which includes his “Bad News” shtick, a sad reminder of a much better gimmick. Ironically, he wants the cast to do a promo on why they would be the “King of the Ring” next year. (DANIELLE: So that it can get popular enough for Triple H and Vince to bury.)

The cast gets in the ring and…pretty much says the same thing: “I’m taking your crown”, “I want that crown and I will get it”, “That crown belongs to me”, “I’ve got bad news: that crown is mine”, “You’re gonna be the King of Nothing”, “My crown, not yours”…it’s just monotonous. Mada screams in the air like a demon’s possessed him and gets right in Barrett’s grill.

The Improv
The cast goes to a local comedy club to learn about “Improvisation”. Chris Jericho is the host of the evening. Jericho says that this is about the next challenge. It’s gonna be a promo battle. (DANIELLE: “But, honey, the tickets said we were gonna see Gabriel Iglesias…what the hell is this?!”)

Following Sara Lee’s failure, Jericho gets in her face and says he can’t stand how awful she is, saying that it pisses him off that she’s still on the show. Sara acquiesces to his confrontational attitude and he has to force her to get in his face. She does but just can’t stop smiling.

Arena
Hogan is convinced that Sara Lee is “trying”. Paige says she’s “not trying” and that it’s frustrating to watch her week after week. Daniel Bryan sits there, mentally balancing his checkbook.

The Improv
Jericho wants to hear the crowd cheer his people. They name the winners: Patrick and Giorgia. Patrick is happy. Mada is pissed because “all Patrick did was connect with the audience”. (DANIELLE: Is that all he did? Man, he’s a failure.) Patrick is proud of himself — but Josh is sick of hearing it and tosses a drink in his face. This pisses Patrick off and he gets into a shoving match with both Mada and Josh. Patrick isn’t afraid of either guy and looks incredible yelling at both of them in the most real part of the show.

The Barracks
The girls call out Gabi for always losing. Gabi says she “held back because she’s professional”. Amanda channels her inner Amanda and calls her a “bitch”. Chelsea and Tanner flirt in the bedroom. They both declare themselves “single”. Tanner’s only hitting on Chelsea because “Sara Lee wasn’t interested”. (DANIELLE: “So, it’s down to you, lady. You’re so lucky to be the target of the Tan-Man!”) Chelsea goes to hug him and Tanner kisses her in the most awkward way.

Arena
Paige and Hogan are disgusted. Bryan thinks it was “smooth”. (DANIELLE: I don’t wanna dislike Bryan…can they make him more likeable?)

The Gym
Billy Gunn wants to teach the recruits about shoulderblocks and body slams. Everyone can do it. Except Sara Lee. She can’t shoulderblock, slam or take a body slam which just requires one to go stiff and let the person slamming you to slam you. (DANIELLE: She’ll fit right in with the current Divas roster.) Billy Gunn acts like the greatest trainer in the world and starts giving speeches about how “the recruits are putting their lives in his hands”. He tells Sara to “get out of her own head”. (DANIELLE: “Make do with the lemons from the horse you lead to water! I can’t always be here to make sure that you’re trying to get from Point A to the Promise Land! It’s not about what your people can do for me, it’s about what your partners can do if they’re given freedom to make you understand that promises and freedoms can be broken and taken away because this isn’t really the land of the free and you have to want things to be yours!”) Sara grins the entire time. Your winners of this one are Josh and, weirdly enough, Chelsea.

The Barracks
Sara Lee is finally starting to crack, crying her eyes out. The other women listen to her. (DANIELLE: Because her boobs are real.) Sara says she’s trying not to let shit get to her. The women all hug her as she describes getting yelled at.

Arena
Jericho doesn’t feel bad. He says that Sara has failed to show everyone what she’s made of. We get a look at our contestants which includes Josh doing his dumb Yeti imitation. Paige yells at Sara Lee for being frustrating. Sara yells back. Daniel Bryan asks Sara Lee if she thought it was fair to hear it from Billy Gunn. She says it was and she bucked up. Hogan turns his attention to Mada and says that he won the promo battle. Hogan’s pissed at Patrick — specifically for talking shit about Warrior and saying that “Hogan is retired”. Hogan actually challenges Patrick, then says that you work with your opponent to “make them look good”. (DANIELLE: And Hogan knows so much about making people “look good”.) Patrick stands up for himself. Hogan says, “Your promo sucked.” Jericho: “But…but, Hogan…he won the promo challenge…” Hogan goes Honey Badger. He don’t care. Patrick’s a “Smark”. (DANIELLE: Hogan needs a little nappy-poo.) Jericho wants Josh to spell sarcophagus. Josh does, rearranging the “g” and the “ph”. Everyone laaaaaughs. Paige has to spell it for him. This is important.

Each person gets to cut a promo to prove they belong here.

Jericho asks each person who should go home. They all want Gabi to go home.

None of the judges wanna make a save this week.

She admits that she had no idea what to do this week and she’s happy that this is over. Renee can’t believe that. Gabi says she wants Sara Lee to win it all.

Matt Perri is one of those literary Ronin you’ve never heard of until he shows up and tells you he’s a literary Ronin. He’s a native Californian, a film buff, old school gamer geek, and a sports/entertainment fan. A lifelong Giants, 49ers and Sharks fan, he also covers the world of pro-wrestling, writing recaps for WWE Monday Night RAW and Total Divas at Scott’s Blog of Doom. You can follow the guy on Twitter via @PerriTheSmark as well as here at The Workprint and his own blog, We Hate Your Gimmick.
@PerriTheSmark
Previous Is Nintendo’s Devil’s Third in Trouble?
Next Pretty Little Liars: “No Stone Unturned” Review

In this week’s episode of Syfy’s The Magicians, we meet a golem, an assassin, and …