This week’s episode of Pretty Little Liars begins with Spencer, yet again, accusing a new person of being A. The only two people who seem gung-ho about searching for clues though are Spencer and Hanna. How does no one else realize how important it is to finally catch A so they can get on with their fucking lives?

Aria starts off her day by dropping off the negatives she stole from Clark, and getting caught in the process. Luckily for Aria, Clark assumes she stole the negatives because she was uncomfortable being photographed. I say ‘luckily’ because Aria has been so useless this season, there is no way she could have come up with a plausible explanation for the stolen negatives on the fly. Just to prove that Aria’s head is legitimately us her ass, the following dialogue occurs when she calls Em:

Aria: It’s not just the junkyard Emily, it’s the bottle of hair color in the dark room, the text in Sullivan’s office. I mean how did A know we were all going to be there at the exact same time 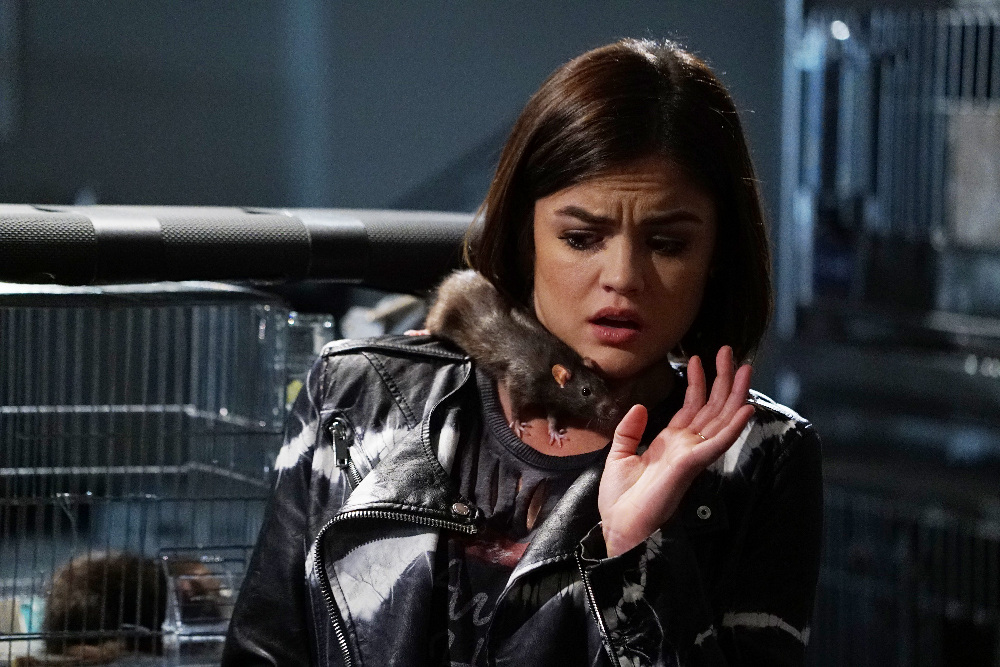 Seriously, what planet is Aria been living on? Out of all the things A has done to you, you are most perplexed by some hair dye and a group text? You are beating Emily for this season’s least competent liar, and that’s saying a lot. Aria has to cut the call short though because her ex-teacher/boyfriend/stalker/biographer, comes-a  knocking. Ezra found Aria’s application in The Brew’s photocopier and took it upon himself to write her an exemplar, albeit fully embellished,  letter of recommendation.

Over at the Field’s household, Sara is freaking out about what to wear to her first day at work.  Emily tries to calm her down by explaining to Sara that her boss literally used to live in the vents of Rosewood High, but it doesn’t work. Sara begins to strip and the two have a conversation about their tattoos with Emily stating “I’m the one who’s gonna have to wear long johns in August so nobody sees my courage.” First wow, that sounded really dirty. Second, I am pretty sure that Emily’s tattoo is on her hip, how would long johns help? Emily picks out an outfit for Sara to wear, but in the end, not even Emily’s gayest flannel can help Sara get through her first day at work. Caleb keeps using terms that are foreign to Sara such as CMS interface, responsive design, Kimye, and smartphone and she just gets overwhelmed.

Emily heads to The Brew where her project leader from Habitat for Humanity is waiting for her. Nicole isn’t here to talk about Emily’s abduction though, she actually came to recruit Emily for a new Habitat trip to Thailand. At first Emily isn’t sure she should leave Sara, but she comes up with a brilliant plan. She will bring her new puppy with her on the trip! Emily runs home with the exciting news and finds Sara frantically scrubbing blood from the carpet. Apparently on her way home from Caleb’s, a sketchy car followed and mowed Sara down. When Emily tells Sara about the romantic Habitat for Humanity trip she has planned for the pair, Sara freaks the fuck out saying she can’t go and she won’t go. Translation, Emily won’t be going either.

Over at the Marin’s, Caleb strolls into the kitchen while Hanna is cyber stalking Lesli. As soon as Hanna sees Caleb walk in she peaces out to follow-up on a new Charles lead in Philly with Spencer. Caleb just cannot seem to connect with Hanna since the kidnapping. Ashley offers him some advice on how to handle Hanna. She tells Caleb that he has to remember that the real Hanna is still inside the bruting girl they see in front of them. Taking Ashley’s advice to heart,  Caleb uses the key Ashley made him to let himself into the Hanna’s house and have sex with his girlfriend. I think that was exactly what Ashley had in mind when she was giving Caleb advice.

In Philly, Hanna tries to get a hold of Lesli’s car on her own. The problem with Hanna’s plan is that she doesn’t fully think it through. First she tells the valet that she lost her valet ticket, then she has to come up with an excuse for not knowing what her keys look like and finally she has to show some bra action and act the part of the ditzy girl to get the keys.  While it was  uncomfortable to watch Hanna’s initial attempt at obtaining the keys fall flat, it was amazing to watch her perseverance. She was not leaving until she got Lesli’s car keys gosh darnet! To make things even better, the scene ends with her screeching away in Lesli’s Range Rover like she has never driven a car before. 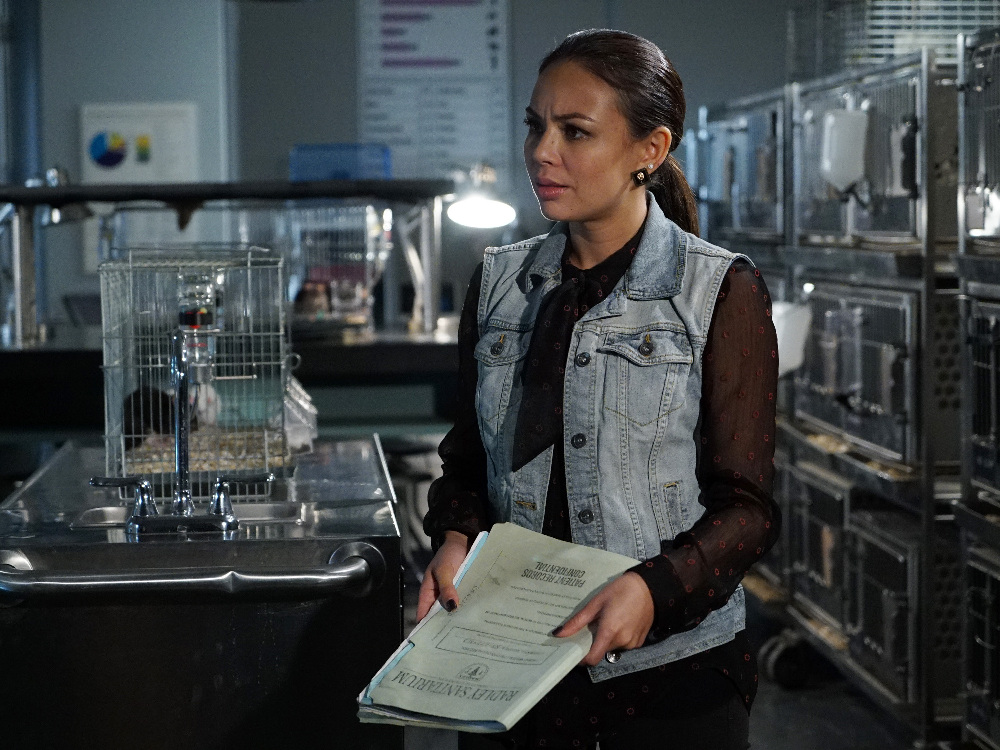 When Spencer finally arrives in Philly, the two scour through the contents of Lesli’s car. In said car they find plenty of items such as wire cutters, a box full of a dozen or so non-prescription eye-glasses (which is pretty much a staple of any Brooklyn hipster’s wardrobe), four unassembled human sized cages, and an ID card to Lesli’s animal lab. The girls head to the animal lab to find more clues.

While sleuthing in the animal lab, Spencer notices that whenever Hanna moves her head, a machine starts to buzz. She grabs Hanna’s head and starts moving it around the room to figure out where the sound interference is coming from and comes to a startling realization: “Bitch chipped us!” Yes, Charles inserted a subcutaneous tracking device in the nape of each liar’s neck (which is why that area was too tender for Emily to get a tattoo last week). Aria is freaking out, but Spencer is still on a mission to find something to implicate Leslie. Hanna reads my mind when she says “Why don’t we hand in our heads.” But actually, Hanna is right, if they extract the chip, can’t the police back track where it was purchased from or something?

Hanna starts to have flashbacks to the Dollhouse when she sees the numerous animals trapped inside cages. She decides that she is going to go all SoSo on Lesli’s ass and free all of the animals. One of those animals is a cracked out racoon. To distract Rocky the raccoon, Spencer throws him some of  Hanna’s cheetos and I never knew watching a raccoon nibble cheese doodles could be so adorable. Luckily Mona, sensing Hanna was in danger, comes to save the day.

The girls are not too pleased to see Mona though and blame her of being on team Lesli. Mona lays it all out for the liars. Lesli is super insane, she has a hard enough time pretending to be a normal person so there is no way in hell she could pull off being Charles. The girls start to protest and Spencer shoves Charles’ organ donor paperwork in Mona’s face. One look at the medications Charles was taking and Mona determines that the records are fake, and wonders how in god’s name Spencer was named valedictorian over her.

Later that night, after the girls relay the whole being chipped thing to her, Emily comes home to find Sara lying in her bed. While Emily tries to search for a chip in Sara’s neck, Sara begins to wake up and the two start making out. Never in my wildest dreams would I have ever thought I would be this upset about two girls kissing on TV.

The episode ends with Mr. D reading a birthday card/death threat from Charles while digging up his grave.

Spencer: Why does Caleb need to cut your meat?
Hanna: Because he thinks I’m weak, but I’m not.

Spencer: Are you stealing her car?
Hanna: No, I am borrowing it. And don’t get all preachy with me puff-and-stuff.