The Walking Dead returns to some old territory with a new twist by dropping Rick and his group of hardened survivors into a sheltered community of starry-eyed optimists. They’ve met only horrors and tragedy since the prison, and it’s refreshing to see them interact with a genuine community of humans again, rather than broken people and monsters. “Forget” is already beginning to show hints of some recurring issues that the series has traditionally struggled with in the past: ham-fisted metaphors, lack of character depth, and character relationships. However, what makes the group’s arrival to Alexandria so compelling is the inverted power dynamic–Rick and his group have all the skill and cunning, while the people of Alexandria are naive and vulnerable. Even as they try to assimilate to life in the community, there’s the inescapable question simmering just below the surface: will they be Alexandria’s saviors or conquerors?

“Forget” is one of the busiest episodes this season, as the group settles into life in Alexandria and individual storylines start to unravel . The characters with less complicated subplots seem to fare a little better here: Daryl bonds with Aaron over horses and spaghetti before Aaron finally presents him with a garage full of motorcycle parts and an offer to become Alexandria’s newest recruiter. Sasha, meanwhile, has the hardest time coping and begins eliciting signs of post traumatic stress. The scenes are well shot and feel genuine; they don’t contain much of the artifice that begins to weigh down the rest of the episode. 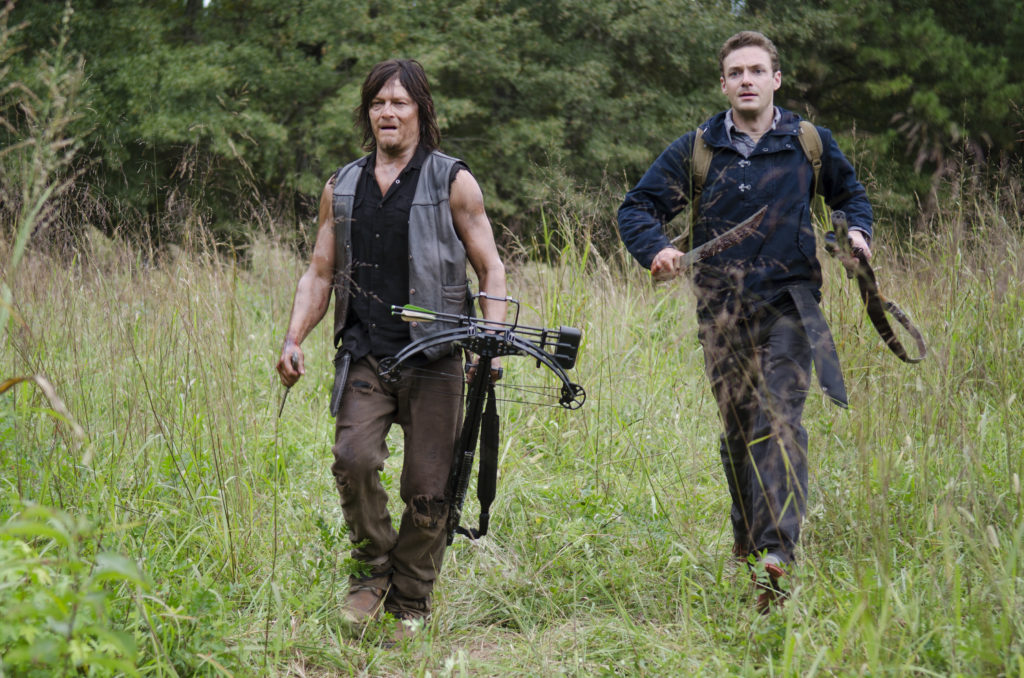 Rick and Carol aren’t wasting any time infiltrating and ingratiating themselves to the community. Rick is walking tall as the newly appointed constable, while Carol is happy to blend into Alexandria’s blissfully ignorant housewives. The two have a confidence that borders on hubris–there’s no doubt in their minds that they can handle any challenge they might come across in Alexandria. They hatch a plan to sneak guns from the armory during the community’s welcome party for Rick’s group (Daryl, blinded by gifts of spaghettis and motorcycles, notably declines to take one). Rick can’t help himself and kisses Jessie on the cheek at the party, while Carol isn’t as invisible as she thought and is followed by Jessie’s son Sam, who witnesses her stealing from the armory. In what is sure to be a fan favorite scene, she threatens to leave him tied to a tree beyond the walls if he tells anyone what he saw.

Complex character-driven conflicts aren’t The Walking Dead’s strongest suit, and we see some of the same problems creeping up again here. With the season finale a few short episodes away, the show isn’t wasting any time setting up some drama in Alexandria, but a lot of it feels out of character. Rick and Carol’s aforementioned hubris doesn’t feel like it entirely justifies their recklessness. Rick hitting on Jessie, who happens to be the mother of Carl’s new friends and married to the community’s only doctor seems like a very foolish decision. Carol, who spends the episode boasting of the invisibility that domesticity has granted her, allows a cookie-seeking child to follow her to the armory. These are the sorts of conflicts and consequences that are to be expected from overconfidence and greed, but the episode struggles provide a convincing build up.

“Forget” also has a handful of other, more mundane issues. We haven’t seen much depth from our characters yet, and even their names are quickly fading from memory. Aaron is perhaps the best developed character from Alexandria, while Deanna Monroe remains impossibly idealistic, and Jessie is the obligatory love interest. The rest of the community quickly fades into a parade of people who will probably not survive. Meanwhile, the metaphors are as clumsy and obvious as ever. Buttons the feral horse escapes capture by both humans and zombies alike, but is quickly surrounded and devoured as soon as Daryl and Aaron manage to chase him into a pen. And at the party, Sam gives his mother and Rick a stamp on the hand: a red A for Alexandria. Sam can be forgiven because he hasn’t taken high school English yet, but the sight of the two walking through town bearing the scarlet letter borders on comical.

Despite its flaws, “Forget” contains a lot of set up for future episodes, and it’ll be interesting to see what direction The Walking Dead chooses to take. Love triangles and inept sneaking aside, Rick and his group are still extremely capable of taking what they want by force, and the show hopefully won’t get too mired in petty relationship drama. Lest anyone forget, external threats are still very real: the discovery of a walker with the letter “W” carved into its forehead is an ominous reminder that danger isn’t far from the gates.

Previous article
First Full-Length ‘Game of Thrones’ Season 5 Trailer: All Rulers Are Either Butchers Or Meat
Next article
A&E’s ‘The Returned’ Review: “Camille”