On The Fosters summer finale: Callie gets adopted, Lena has the sex talk with Jude, and Jesus returns with a new face.

“Lucky” starts off in the same icky way that last week left off, with Callie and Brandon in bed together. Watching the two cuddle in post-coital bliss actually caused a little bit of bile to come up my throat. Last week was not a dream, these two really had sex. Brandon starts to stir and tells Callie that he needs to get back to his own room before Mariana, their sister, catches them in bed together and is traumatized for life.

Brandon and Callie head home with a blissfully ignorant Mariana and are greeted by everyone in the kitchen screaming “Surprise Callie, YOU CAN BE ADOPTED!” Apparently after interrogating the Girls United crew, the social worker found no more evidence that B and Callie were still together, so she is recommending Callie for adoption. This is amazing news, finally something good is happening to Callie. Callie officially has a family, and an older brother who she just had sex with. The fact that Brandon did not stop every and yell out “What about me! Does no one care about how I feel?!” shows how much Brandon has grown over the last two episodes.

Callie is excited, scared, surprised and confused all at the same time. She doesn’t understand how her adoption is still on the table since she admitted to Rita that Brandon broke his restraining order. Rita sits Callie down though and explains that she is giving her a second chance, and Callie should take it.

Immediately after discussing making smart decisions with Rita, Callie runs up to Brandon’s room. They both admit that if they knew the adoption was still a possibility, they would have never slept together. I mean, yeah I would hope so! I think Daphne sums it up best:

Daphne: “You slept with him? Girl, what’s wrong with you?”

Callie literally can’t leave well enough alone, and later that night Brandon in his bed to tell him she loves him. The two try to excuse their actions by telling each other they didn’t technically break any rules and didn’t do “anything wrong,” but come to the conclusion that they can never tell anyone about their late night cabin rump. Except for Daphne, because she already knows.

This leads to one of my favorite moments ever on The Fosters, which involves a lesbian mom trying to have a sex talk with her gay son. Lena starts by saying how emotions are an important part of sex and that having both an intimate and physical connection matters. The talk ends with this unforgettable line:

Lena: “Okay, look, if I’m being honest, I don’t know a whole lot about the logistics of two men being together. But I definitely want you to know how to take care of yourself.”

This may be one of my favorite lines in history from a lesbian TV character. Next Lena pulls a condom out of her back pocket (which she obviously had to scour Brandon’s room to find) and basically says “So this is a thing that guys put on their thing down there when having sex. I am hoping you know how it works, because I 100% do not. If you have any questions either ask your older brother who is banging your sister, or your other older brother who forgot to use one of these his first time and then had to buy his girlfriend the morning after pill. Get it? Got it? Good” 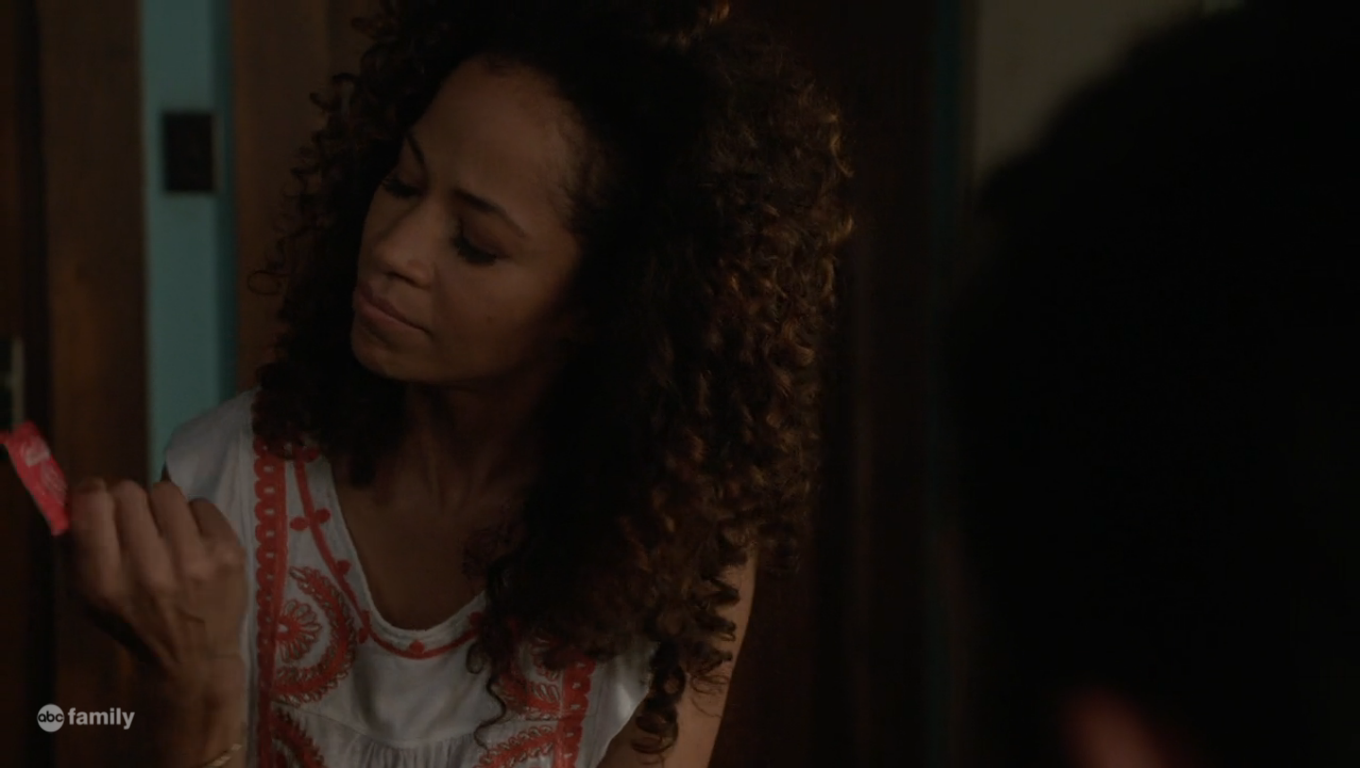 Jude tells Connor all about his mom’s “sex talk” experience and says, verbatim, “for a lesbian she sure knows a lot about how guys have sex.” Jude, Lena legit said she did not know a thing about how two guys have sex, pulled out a condom and said you should probably use it. She knows absolutely nothing. The extent of her knowledge is that a condom should be used, which anyone who took 9th grade sex-ed should know (except if you live in the bible belt). Connor is impressed with how chill Jude’s moms are with the two of them making out and tells Jude that he wants to move to LA to live with his mother, because his dad is still not okay with Connor being gay. Jude is angry and upset, but realizes that no matter what he feels, the most important thing is that Connor lives in a house with a parent who accepts him. If anyone can make a long distance relationship work, I think it is these two (I also google mapped it, LA is only a 2 hour drive or a 3 hour train ride from San Diego. It’s not ideal but it could be worse, right?).

While Lena and Stef are elated that Callie’s adoption is back on, they also have their own shit to deal with. Lena keeps trying to discuss the huge ass elephant named Montee that is sitting in the middle of the room, but Stef brushes her off claiming that they need to keep prepping for the anniversary party they are throwing for Lena’s parents (meaning the lovely Lorraine Toussaint made an appearance). As if things couldn’t get worse for Stef, she gets a call from her doctor saying there was an abnormality on her latest mammo, and she needs to come in for a second diagnostic mammography.

The next day at summer school Montee tells Lena that she is in love with her to which Lena flatly responds “And I am in love with my wife.” Before Lena can rip Montee a new one, her douchebag brother (the one that called Lena’s mom the N word) pops his head into Lena’s office to apologize for being douchebag, dumbass, racist brother for all these years. Lena’ ingests her brother’s words, and tries to identify how she can apply them to her marriage. When Lena gets home she tries to continue her honesty streak, by telling Stef about Montee’s love confession. The conversation quickly turns into an argument, with Stef twisting everything Lena says. Stef snaps and asks how Montee just falls in love with Lena out of the blue

Stef: “Does it just happen? Is this something she caught, like a virus or a cold? Is it contagious?”

I think the writers of The Fosters are reading my mind, because I basically asked that same exact thing last week. Lena admits to liking the attention Montee gave her, which causes Stef to break down, screaming that she is sorry that she can’t always put Lena first when their family is falling apart, two of their kids are fucking and they are hosting a party in their backyard.

The next day at the party, Stef runs into the garage to take a call from her radiologists, and Lena follows. Stef tells her wife about her breast cancer scare, but that there is nothing to worry about, her scans came back clean. They hug and cry, and finally are in a place where they can talk openly and honestly with each other, and be receptive to each other’s feelings. I am so excited to watch these two have a heartfelt conversation without bickering, but instead, the show cuts to Mariana singing a birthday present to her grandparents. She actually has a really good voice, but let’s be honest, I would have rather watched Stef and Lena make up and process their feelings. The moms conversation seems to have went well because the next time they are on-screen, the two are slow dancing and reminiscing about their wedding. 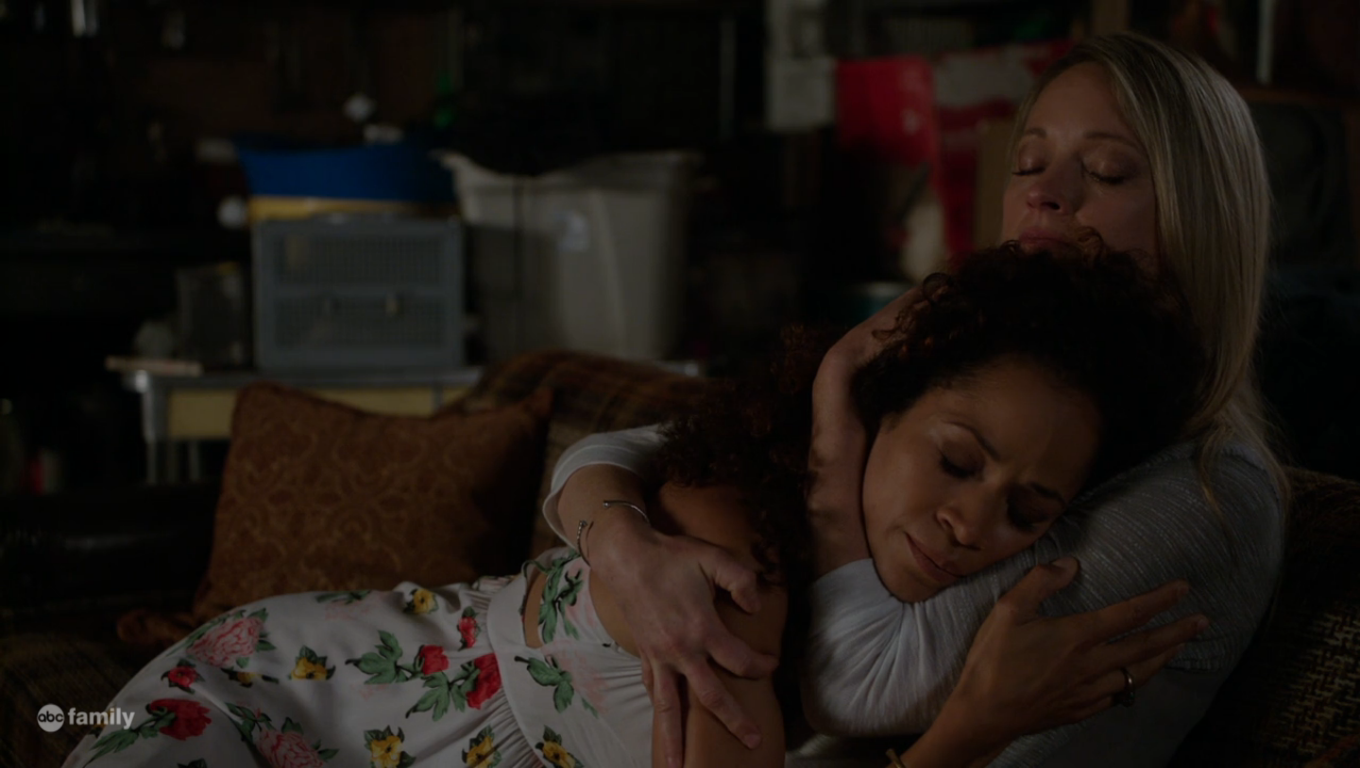 The day has finally come (again) for Callie’s adoption hearing, and hopefully this one will be her last. When the Adams-Foster gang gets to the courthouse, Callie’s social worker has some bad news. She found out that Brandon and Callie had sex in the cabin and the adoption is off. Just kidding. What really happened was that the judge saw the video where Callie calls the judge out by name for being an asshole, and he is not very happy. Callie refuses to apologize for her video though, stating that she needs to be the voice for kids who cannot speak for themselves. She tells Lena and Stef that while it will be heartbreaking, she can live without being adopted, but cannot live with herself if she took back her comments about the foster system. When Callie walks into the courtroom, it is filled with foster kids who came to support Callie after seeing her video. The judge turns out not to be a complete asshole. He commends Callie on speaking out against the system, asks her one more time to confirm she is not boning her brother, and then grants Callie’s adoption. Callie is officially and legally a member of the Adams-Foster family. I never thought the day would come when the writers of the show would actually allow something good to happen to Callie. 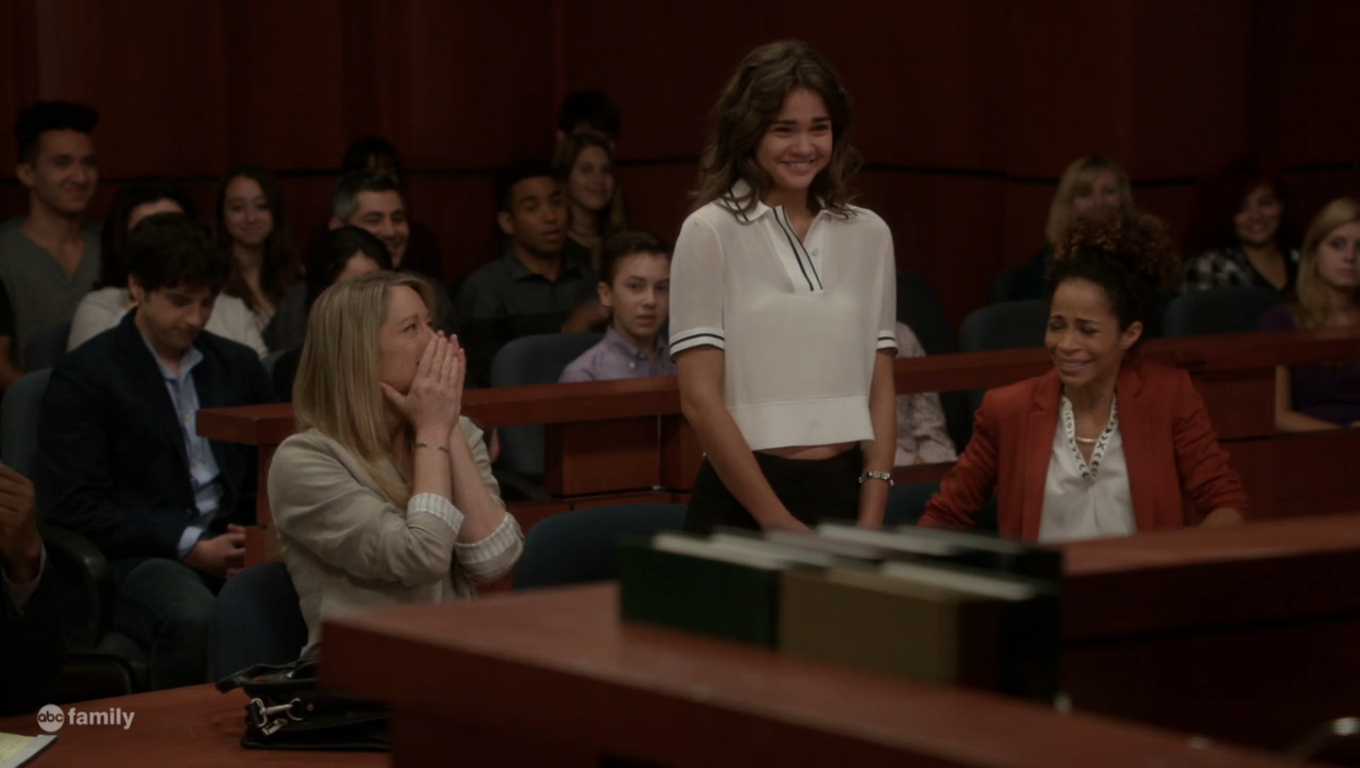 The whole family comes home from the courthouse to find new face-transplanted Jesus (Noah Centineo) waiting for them in the kitchen. New Jesus really has a lot of old Jesus’s down, and seems like a better actor so I am down with this change.