We are halfway through the second season of USA’s Playing House and, while the show’s been as comfy and familiar as your favorite t-shirt, there hasn’t been much in the way of a major overall plot or character development. The good news is that “Knotty Pines” finally gives us something to chew on. The bad news is that the lack of prior emotional investment makes the final twist somewhat moot.

After seemingly making peace with Mark and “Bird Bones” in “Hello, Old Friend”, Emma and Maggie elect to start hanging out with Tina again on a regular basis — they just want Tina on “their level” if that’s gonna happen. After Tina tries on a little red dress that’s beyond her comfort zone (and buys it after some positive encouragement from the ladies), Tina pushes their boundaries by signing them up for an “all-women’s woodworking class”. As is the norm, Emma’s not enthralled and doesn’t want to be there, but Maggie accepts right away as part of their unspoken “good girlfriends” scheme. 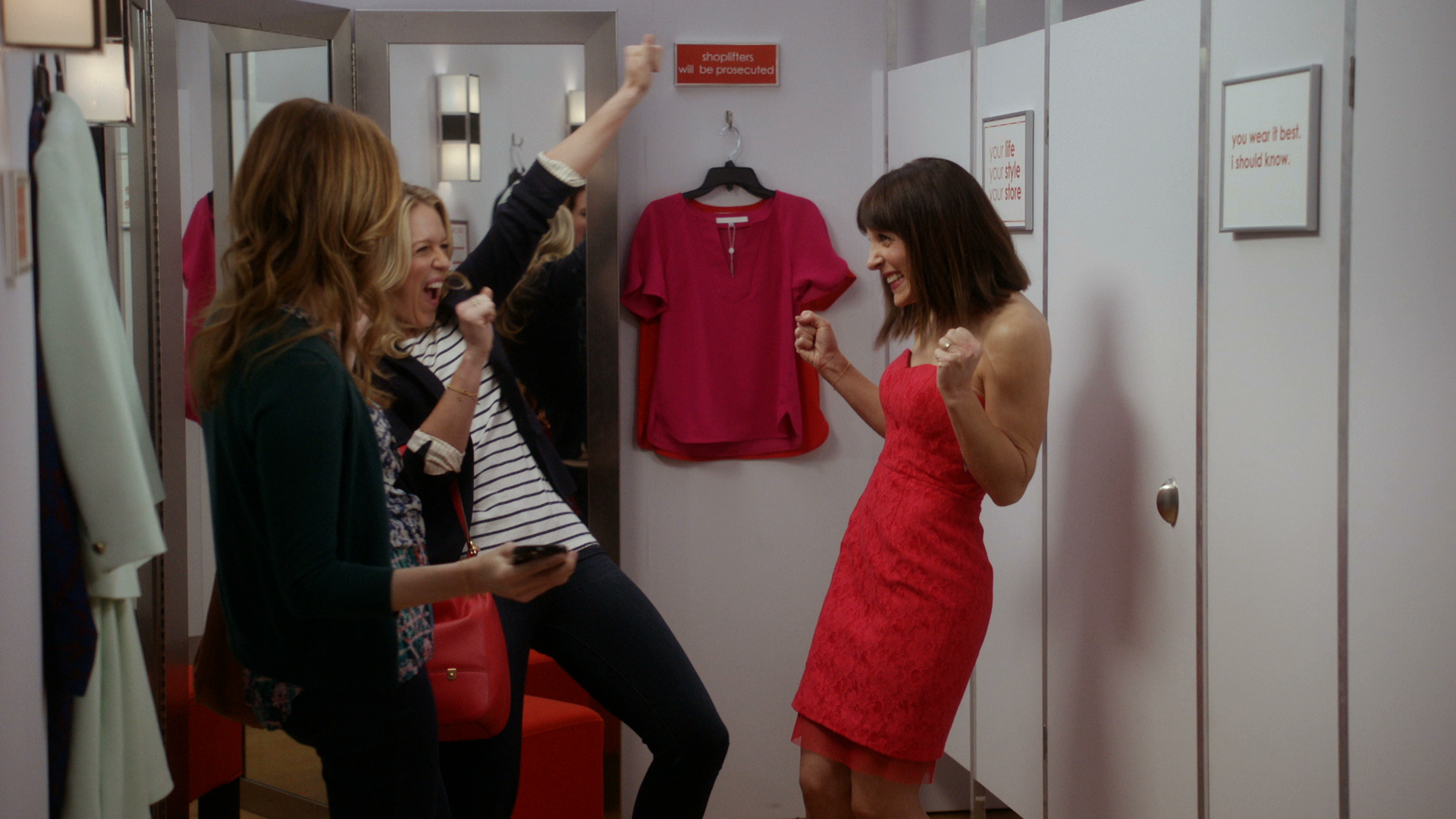 The episode goes for broke when we meet Buck Finch, the wood shop’s owner and master carpenter, played by Rob Riggle. As Finch, Riggle channels Channing Tatum a’la Magic Mike XXL, introducing himself to his students by grinding a steel beam into a buzzsaw to Ozzy Osbourne’s “Crazy Train”. Why would he need a steel beam if it’s a woodworking class? That’s part of the joke, of course. Finch uses his class and his “charm” to seduce married women who aren’t getting the attention they need at home. He makes suggestive comments about wood, enticing his students to “feel it” and “get to know it” and says that after some work, it can be as “smooth as the inside of a woman’s thigh. While Riggle’s a perfect fit for the world that Parham and St. Clair have created, Riggle’s smug machismo is doled out in heaping comedic spoonfuls, but the character is so over-the-top, it’s a bit hard to believe that anyone could be taken in by his antics. The woodworking innuendos are a bit much as well and smacks of lazy writing.

While Emma and Maggie play along with his meathead act for shits and giggles, Tina’s the perfect target for Finch and he goes all in, complementing her on how well she’s sanding her hole, if you’ll excuse the wood shop parlance. He even invites her into his shop early for a more intimate “lesson”. As it turns out, Finch’s talents are not limited to woodworking and carpentry — he’s also a local DJ who spins at the local bar. When he invites every woman in his shop to one of his gigs, most of them raise their hands — and that’s the last straw for Maggie. She doesn’t want to see Tina get hurt. Emma couldn’t care less, having been burned before by involving herself in “Mark and Tina drama”. When Maggie fails to adequately explain their concerns to Tina, however, Emma does get involved. But even her attempts find Tina unwilling to accept the truth. 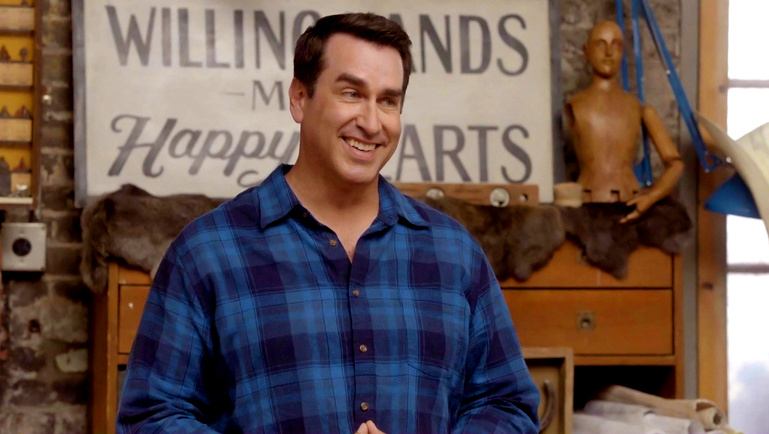 Reluctantly, Emma goes to Mark who wants nothing to do with Tina’s outside friendships and activities. She begs him to meet his wife halfway by coming to the bar. “She does her thing and I do mine,” he explains to Emma, who gawks over his awesome model train hobby set. It’s ironic that Tina and Mark have such a disconnect: Mark built Emma’s birdhouse for the shop class. Did he do the same for Tina? Wouldn’t something like that bring them together? Things ultimately come to a head when Finch dances with Tina at the bar and then kisses her — right as Mark does show up, much to the surprise of Emma who didn’t think he’d listen to her pleading. The scene that follows this outside the bar is heartfelt: in the past, we’ve seen Mark lose his cool and shout out what he’s feeling. Here, he’s still very animated, but exhausted. Tina explains that Mark doesn’t pay attention to her. Mark says that’s all he’s done since the fallout with Emma and Maggie and that he feels like he’s pretending everything’s fine in order to suit her. The ladies do their best to console Mark after he and Tina go their separate ways and the episode comes to its logical end.

“Knotty Pine” is a mixed bag. It’s mostly dominated by a really forced plot device involving Riggle’s smarmy carpenter/DJ and there’s not really much to his character beyond being a sudden and unlikely wedge that’s sort of shoehorned in to suddenly drive Mark and Tina apart. Everyone seems desperate. Finch is desperate to get some tail, Emma’s desperate by begging Mark to come see his wife at the bar, Maggie’s desperate to help Tina have a life. It all feels like somebody drew a bad football play in the dirt and everyone involved knows it isn’t going to work and, so, they’re going through the motions. We knew the break was coming eventually, but everything is so quick that I didn’t really believe that Finch was truly interested in Tina or vice versa. The humor also comes off as repetitive. I love the little catchphrases on the show, but I can only hear Maggie and Emma say, “body be bangin'” so many times before I start rolling my eyes. Their pairing and interactions are as natural as can be — as I’ve noted in the past — but there are some episodes (and I’m including this one) where their back-and-forth seems like they’re padding the running time because the weaker parts of the stories aren’t terribly intriguing.

To its credit, the break-up scene was done well. Parham and St. Clair have done well in not making Tina look like a complete nutcase. She’s human even with all her eccentricities and your heart breaks when we get this exchange between her and Mark:

Anyone who’s ever been in a failed relationship can sympathize with TIna’s answer to that question. Everyone’s afraid of failure and they’d rather go down with the ship than leave in a lifeboat when it comes to that sort of thing. This may be the most down-to-earth we’ve seen Tina — and it’s followed up by a slightly more treacly scene involving Emma and Maggie. It’s nice to see the three of them interact after Mark’s relationship fracture, but the scene isn’t entirely necessary and feels like leftovers from a bad made-for-TV movie from The Hallmark Channel. It’s still a funny episode — especially the bits concerning Maggie and the “UPS Driver” who she gossips with. He’s played by Jack McBrayer of 30 Rock and that small storyline (running parallel with the “inappropriate relationship” theme) really outshines the whole Finch/Tina angle. 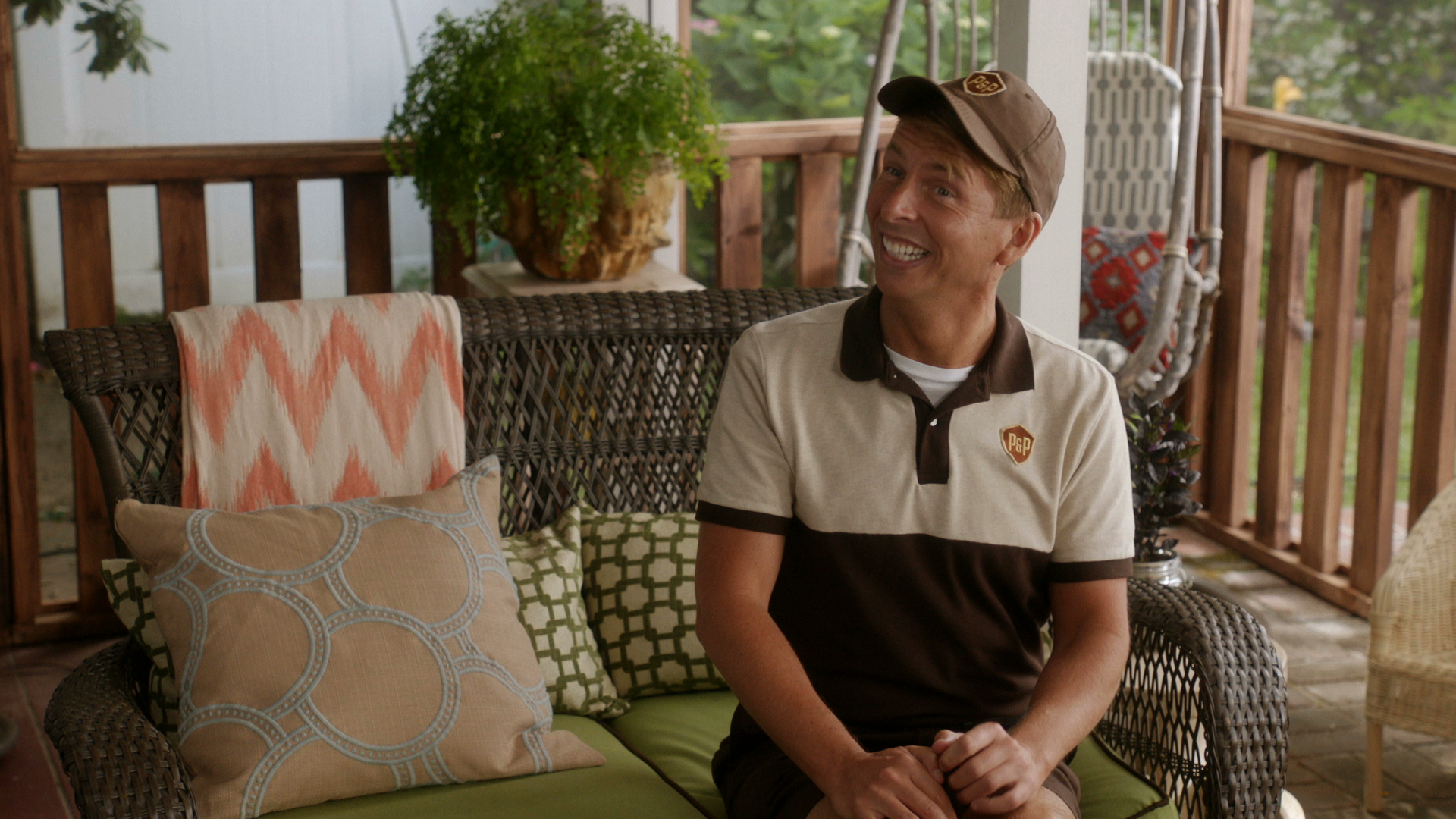 All in all, I still enjoyed this episode. A so-so showing of Playing House is better than most anything you’ll see on television these days.