‘The Flash’ Review – “The New Rogues”

This week on The Flash: Mirror Master does some magic tricks, Jesse dons her new suit, and Barry and Iris have trouble with PDA.

This week’s episode of The Flash, “The New Rogues,” starts with a flashback to the day of the explosion in Central City. We are introduced to Sam Scudder and Rosalind Dillon who are interrupted by Leonard Snart. After a scuff, Snart drops Sam on the top of a mirror and holds a gun to his head to kill him. Just then, they hear the explosion. Snart runs off, but Sam and Rosalind are both hit by the particle accelerator.

Back in the present, Scudder is revealed to have been trapped inside of the mirror, where he realizes he has developed the power to go into any reflective surface and then out another. In one of the best moments in the episode, Cisco starts to name him when Harry yells, “Mirror Master” stealing Cisco’s chance. Scudder breaks Rosalind out of Iron Heights and the Mirror Master/Top team-up begins. With Snart out of the way, Scudder decides that Rosalind and he can rule the city. Since the show is called, “The Flash” and not “The Mirror Master,” Barry and Jesse must take care of him and Rosalind before the show’s over. 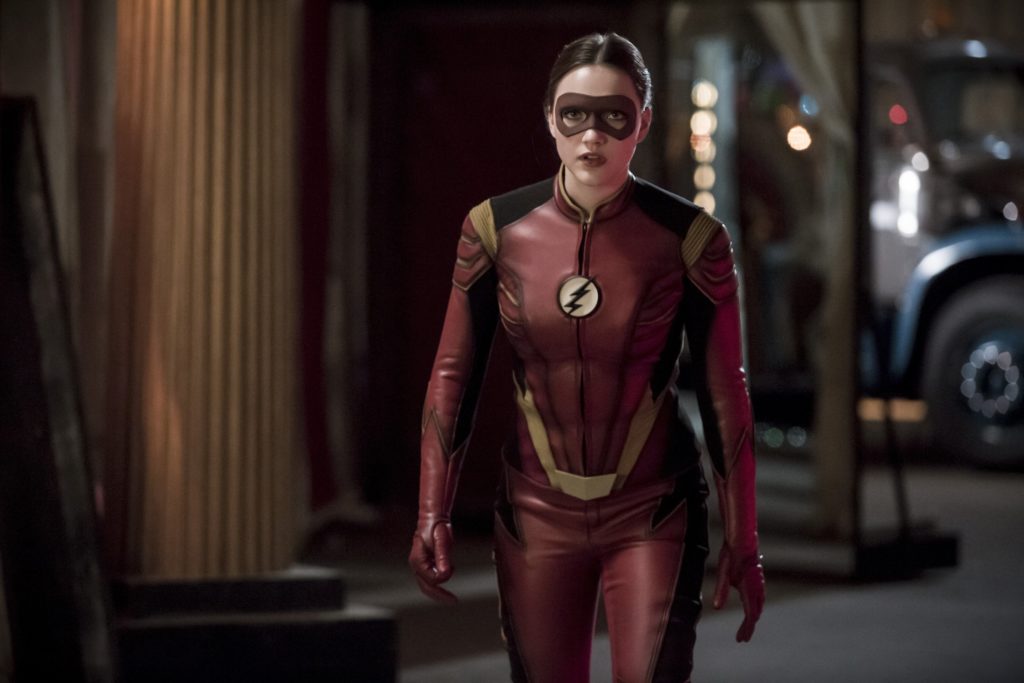 Last week ended with Harry giving Jesse a costume, saying that he believed in her. I want to take a moment to express my love for Jesse. Violett Beane plays Jesse Wells so well, she is a joy to have on The Flash. Since last season, she’s had affections toward Wally and we finally see her make a move by kissing him. Wally rejects her advances, saying that she is from a different earth and would be leaving soon. Eventually, he comes around and they share a very sweet kiss. They are a great couple and both great additions to the cast. I would totally watch an “Earth-2” show with Wally and Jesse taking out bad guys as a duo.

As far as Jesse Quick, she gets her first field experience taking on Top and Mirror Master. After dismissing Barry request to stay back, she confronts Top and falls off a building. Barry saves her but her confidence is shaken. By the end of the episode, she regains her confidence thanks to Wally, and takes down Top. Her and Harry hope back to Earth 2 at the end of the episode. I don’t know what the long-term plans are for Jesse Quick, but I hope she’s back very soon.

After 3 seasons of missed opportunities for Barris/Irry (let’s go with Fliris), we finally get to see Barry and Iris take things to the next level. This introduces a new, important, and highly comical, kink into their family/team dynamic. Joe took Barry in after his mother’s death and father’s imprisonment, which makes Joe a surrogate father for Barry. Joe is, in fact, Iris’ father. That dynamic alone makes things strange. This week, Barry and Iris heat things up on the couch just as Joe walks into the house. In the flash of an eye (pun intended), Barry turns off the music, turns on the lights, and replaces his glass of wine with a bottle of beer. Joe realizes all this and refuses to make eye contact. It was hilarious to watch; however, Iris is not happy about the whole situation and asks Barry to talk to Joe. That talk goes over as well as you’d imagine, leading to another awkward family moment. Just when Iris stands up to settle things once and for all, an alarm goes off which means Barry and Joe must get going. Iris’s reaction is so good. So many times, shows like this struggle with the relationship area of the hero (I’m looking at you Arrow!). You spend several seasons building up a relationship and then you struggle to keep the drama going. I think The Flash has solved that formula thanks to Joe. I love that Iris and Barry and still committed to each other and are going to work it out, but the dynamic of working together and being around Joe all the time will add the needed drama to keep the relationship fresh for a while. 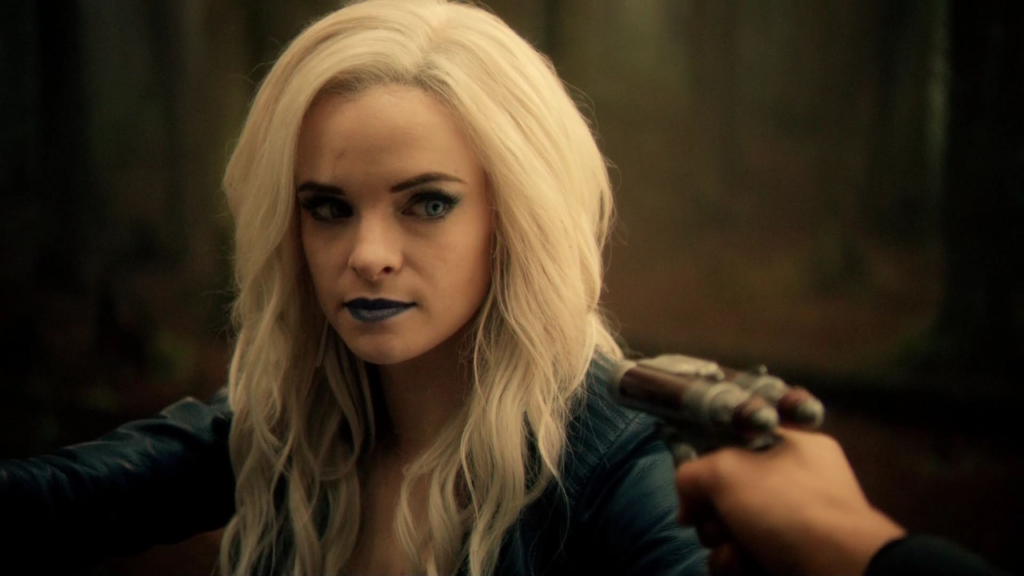 In “Paradox”, we learned that Iris and Joe’s relationship was not the only thing affected by Flashpoint. We find out that Cisco’s brother was killed and that Diggle (from Arrow) had a baby boy instead of a girl. In the closing moments of that episode, we learned that Caitlin has developed ice powers like that of her Earth-2 doppelganger, Killer Frost.

In “The New Rogues,” Barry is trapped in a reflective object by Mirror Master. Cisco and Harry figure out a way to get Barry free, but it all depends on they achieving a low enough temperature. They can’t seem to get the temperature low enough. When the alarm sounds, everyone runs off leaving the machine running to try and free Barry. Caitlin walks behind the object and freezes it enough for Barry to escape. Barry doesn’t see her but the team knows that it wasn’t the machine that set him free. The episode ends with a pretty big shock moment. As Caitlin is trying to enjoy a warm shower, she unknowingly freezes the water. Once out of the shower she looks at herself in the mirror to find, not only are her lips turning blue, but she now has a white stripe in her hair. It will be interesting to see how Caitlin is developed and if “Killer Frost” makes a return.

In a show full of amazing actors, Tom Cavanagh has probably been my favorite. The first season, he got to jump between wise mentor and evil super villain. Then, in season two, he was the grumpy, over-protective father. Now, in Season three he shows up to get the team’s help with his daughter, who is now a speedster. The team decides that they operate better with a Harrison Wells on the team, and Harry has the great idea to send an invitation out into the Multiverse for a replacement Harry. The ensuing montage of Cavanagh playing the Wells characters from the Multiverse is hilarious.

The team settles on a prime candidate who is basically Harrison Wells which a sense of Humor. Harry doesn’t like it and says he has a bad feeling about it. However, in the end, the team brings New Harry–who likes to be called, “H.R.”–into the fold. Once again, The Flash is reinventing Dr. Harrison Wells and the amazing and talented Tom Cavanagh is rising to the occasion. I’m excited to see the Dynamic that H.R. will be bringing to the team. 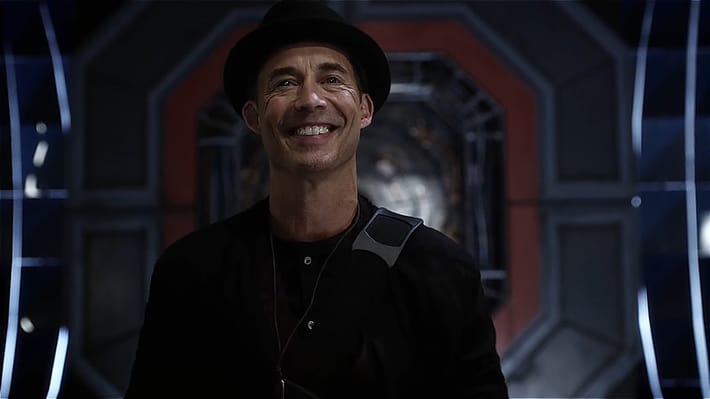 The Flash has started season 3 very strong. We are still seeing the ripples of Flashpoint and, with the next few episodes highlighting Caitlin, we are clearly not out of the woods yet. I would put this amazing cast up against any other cast on television today. They are all brilliant and make the show a joy to watch. “The New Rogues” was a lighter episode with more comedy then we’ve had this year but it also sets up what’s coming very nicely. If you aren’t watching The Flash, it’s time to catch up.

Harrison Wells (Earth 2): I care for you too…you jack-wagon.

The Flash airs Tuesdays on The CW.