I was enthralled and excited after watching the pilot of Pitch (as can be seen in my review of the episode). I saw the potential of the show in regard to character development, stories about a female navigating a male-dominated world, and the exploration of a rookie pitcher. I have not felt that same excitement when watching the subsequent episodes of Pitch, though. Don’t get me wrong, I still enjoy the show, but the magic that encapsulated Pitch’s pilot seems to have diminished.

This week’s episode of Pitch, “Alfonzo Guzman-Chavez,” revolves around the MLB trade deadline, which is the last day that a team can trade any players who do not have a no-trade clause. This is a stressful time for nearly everyone in the baseball world: players, managers, GMs, and owners. The players who have a no-trade clause have to deal with the uncertainty of what their team will look like tomorrow while all of the other players have to worry what state they and their family may live in the following day. While I understand the fear and anxiety that accompanies the trade deadline, the way it was portrayed at certain times seemed forced. The main example that sticks out in my head is when Lawson stands up in the locker room to tell everyone to not worry about the deadline. He gives one of his Lawson speeches about how they just have to power through and stay off social media. If they are going to be traded they will be informed by the front office, not by twitter. My problem with the speech is that it was framed as the Mike Lawson, the sage baseball veteran, telling all the newbies that everything will be okay. But for most of the team, this is NOT their first trade deadline. That is not to say that the deadline isn’t nerve wracking no matter how long you have been in the league, but Mike’s speech read more as an exposition to the viewers than an authentic speech to his teammates.

Although Ginny has been assured she will not be leaving the Padres, she is freaking out that Blip might be traded. If Blip leaves she won’t just be losing a teammate, she will be losing her family. If Blip leaves so does Evelyn and so do their twins and that is the only family Ginny has in San Diego right now. Ginny basically lives at the Sanders’ house: she eats dinner there, plays video games with the twins, and she vegges out on their couch. For goodness sakes, Evelyn even makes Ginny set the table!

Ginny is so worried about the potential of Blip leaving that she becomes obsessed with following up to the second news about potential trades around the league. She even enlists Eliot to help her figure it all out. In my second favorite scene of the episode, Ginny calls Eliot up to find out the likelihood of Blip being traded. Eliot goes into a long winded explanation of how fantasy baseball works (which completely went over my head) and tells her that if A through Z happens, there is a 0.5% chance that Blip might be traded. The only thing Ginny hears though is “Blip might be traded.” (Side Note: I need Pitch to have more Eliot scenes EVERY WEEK.)

One of the reasons that Ginny is so sensitive to The Sanders leaving her is because of her old friend Jordan. Ginny and Jordan were teammates in High School and instantly became best friends at first sight. They were inseparable: they watched TV together, they drank beer behind the bleachers together, they loved Katy Perry songs together. But Jordan’s home life was not so peachy and he was raised by a single father who also happened to be an alcoholic. Jordan’s alcoholic father also happens to be the drunk driver who crashed into the Baker’s truck killing Ginny’s father. After the accident, Jordan moved away. That is the entirety of the Jordan story (or at least as much as Pitch wanted to show us this week). 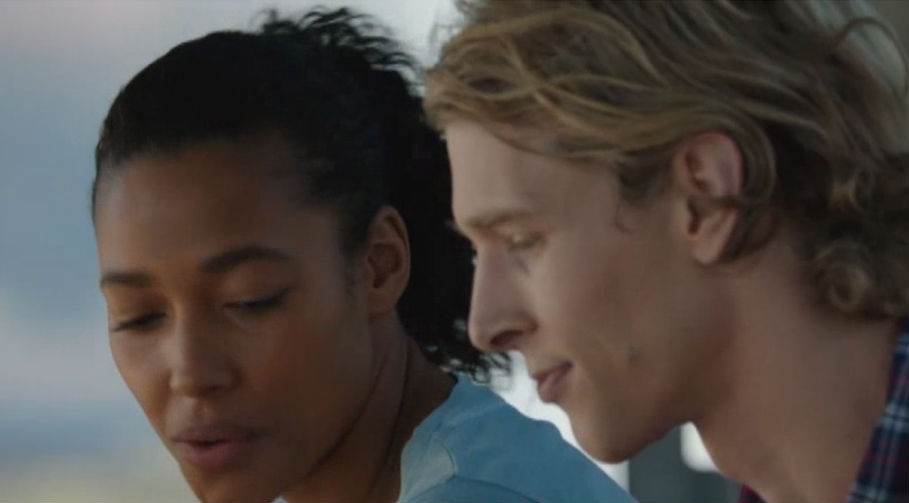 Apparently, the memory and scars of Jordan fuel Ginny’s anxiety about the trade deadline. Amelia convinces Ginny that she holds all of the power in this situation and she should go talk to Oscar and demand that Blip not to be traded. This interaction goes as poorly as it possibly can, and actually almost backfires because Oscar had not considered trading Blip until Ginny mentioned it. In the end, Blip stays and Tommy, the pitcher who was an ass to Ginny at first and then started to be nice to her, was traded.

What bothers me most about the episode is how the flashbacks were handled. In previous episodes, the flashback tied explicitly to the present situation, making it feel like a “problem of the week” while also giving us some of Ginny’s background. The connection between Ginny and Jordan’s friendship to the trade deadline is a stretch. Jordan moving away after his father kills Will Baker does not echoes Blip leaving Ginny (which I will get to in a second). An argument can be made that Jordan and Ginny might correlate closer to Ginny and Tommy’s relationship, especially since he was the one who ended up being traded. Up until the end of last week’s episode when he reluctantly invited her for drinks with the boys, he was an absolute jerk to Ginny. This week, they are somewhat more friendly and they run the stairs of the stadium together to blow off steam. Are they suddenly best bros now? Pitch seems to expect the audience to accept that Tommy and Ginny are close now, because the show tells us they are, instead of demonstrating that these two have forged a connection.

My biggest problem with the flashback though is the connection between Jordan’s father and Will Baker’s death. If that aspect of Jordan and Ginny’s friendship did not exist, I think that the flashback could translate to Ginny’s current situation with Blip. Ginny has been an outcast for most of her life, so for her to find someone like Jordan who she could trust, would mean a lot to her in the same was as her finding someone like Blip and Evelyn. There seems to be a chunk of the story missing. An entire episode is spent showing their blossoming friendship and then he just moves away after Will dies? What happened between Jordan and Ginny before he moved away? By wrenching Jordan and Ginny’s relationship away in the manner they did, it cheapens their bond.

Of course, I need a section about these two because they are my #RelationshipGoals. 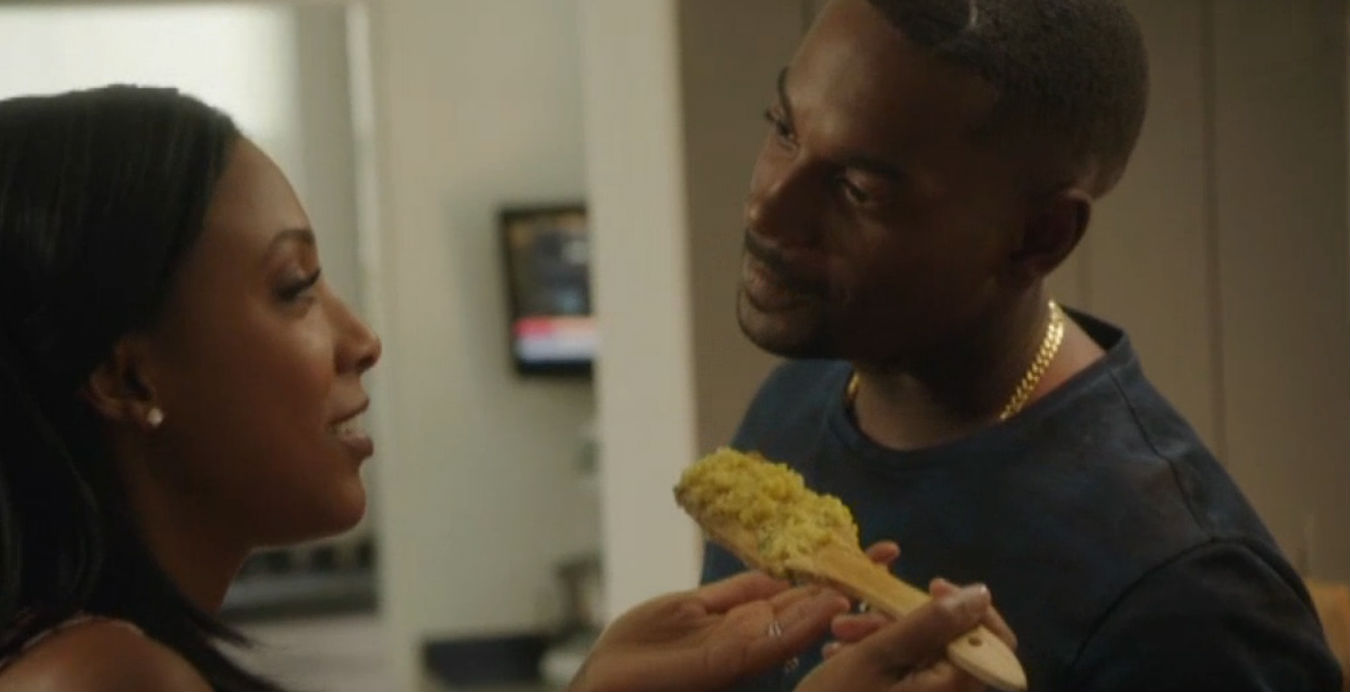 Evelyn is super excited because the price of the house she has had her eye on just dropped by half a million. Blip isn’t able to share in his wife’s excitement though because there is a trade deadline coming up and no one is safe. After spending the past 24 hours stressing about his status on the Padres, Evelyn kicks him out of the house and forces him to spend time with Mike Lawson. While shooting pool with Mike, we learn that Blip is literally the Relationship Rainman. After Mike ignores a call from a girl, Blip goes through the following logic:

Guys, Blip is an actual genius.

Meanwhile, Evelyn and Ginny are having a nice night in with wine and TV where Ginny just cannot stop obsessing about Blip possibly leaving:

Ginny: “The Padres without Blip is like Destiny’s Child without Beyonce.”
Evelyn: “I love my husband, but he’s no Queen Bey. Kelly Roland maybe”
Ginny: “Okay but you get my point”

When Blip finally comes home everyone gets an alert on their phone suggesting the likelihood of Blip being traded has increased. While Blip wants to relax and NOT talk about being traded Ginny will not stop talking about it and finally, Blip explodes at her. I sometimes forget how young Ginny is until scenes like this (and well her singing along to Katy Perry). She is not old enough or mature enough to realize this is not all about her. She is only 23 years old and her whole life has been baseball. She didn’t go to college, she didn’t experience milestones that most young adults experience and because of this she can be oblivious in certain situations. To Ginny, Blip being traded means she will be losing her best friend and family. To Blip it means being forced to move his entire family to a new and strange location. It means ripping his sons from the only life they know. And until this moment, that wasn’t even a thought Ginny considered.

But because it is impossible for Blip to stay angry at Ginny, he comes into her lockerroom and they sit together in silence during the last seconds until the deadline hits, knowing that they have each other’s backs.

Mike and Amelia get in a fight after her car is vandalized while at his house and he accidently calls her a groupie. So to say “I’m sorry” Lawson treats her like a groupie and gives her a super expensive loaner car a gesture which Amelia does not appreciate. So Amelia recruits Eliot to return the car back to the dealership and has an utterly amazing emotional breakdown, revealing to Eliot that she is sleeping with Mike, and that she is not a groupie, and that Eliot is wrong for making her tell him about their relationship, and that she is a strong independent woman, and that Eliot needs to stop judging her. Mind you, Eliot does not say a single word throughout Amelia’s entire rant. I will reference my statement earlier I NEED MORE ELIOT. Oh, also Amelia and Mike finally tell Ginny about their relationship. 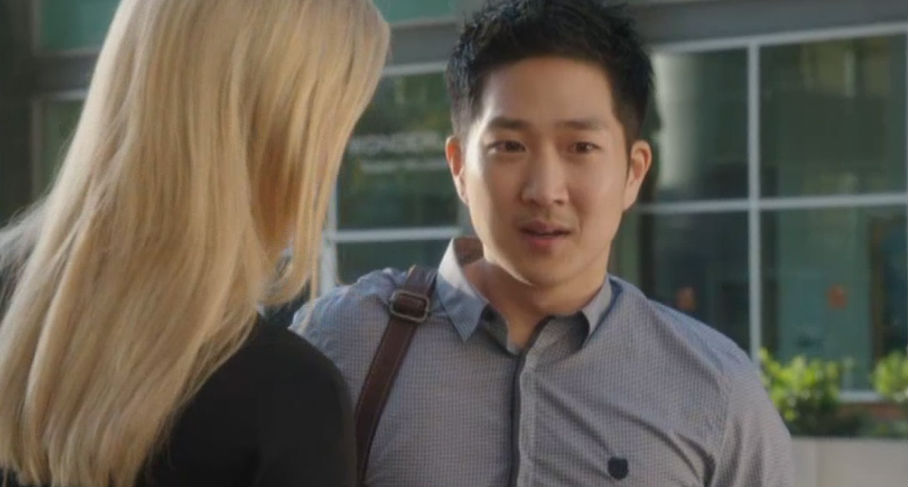 Oscar (who I still hate) is getting pressure from the new head of the franchise to decrease the Padres’ budget by 2 million dollars before the deadline, a feat which Oscar declares near impossible. So he spends the entire episode being a raging douche while playing out scenes from Moneyball and yelling at Ginny that baseball players are just pawns and that the MLB can do whatever they want with them.