After finishing Batman: The Telltale Series episode three, “New World Order,” I can confirm that the hype over this game is indeed real. Batman has been portrayed in many different ways over the past 30 years that it’s hard to imagine anyone could put an origin spin on his cowl. However, Telltale has managed to do just that by taking the tortured Bat’s history we know so well and turning it on its head. Thomas and Martha Wayne are no longer victims in the story of Bruce Wayne’s life. Instead, its revealed that Thomas has ties to both the corrupt Mayor Hill, as well as the mobster Carmine Falcone. The Waynes are no longer the philanthropic symbol of hope for Gotham, which puts Bruce (and Batman) in a perilous predicament.

After the events of episode two, “The Children of Arkham”, we learned that Bruce’s empire rests on the unjustly earned laurels of a corrupt man who wrongfully committed citizens like Esther Cobblepot to Arkham Asylum. When faced with these revelations, Bruce is forced to learn how to reconcile the man he knew as his father with the criminal seen in the Penguin’s videos. If that wasn’t enough, he has to grapple with maintaining control of Wayne Enterprises while also protecting Gotham from the rampaging Children of Arkham.

Thomas Wayne isn’t the only one whose true colors have been on full display for Bruce. His childhood friend, Oswald Cobblepot (the Penguin) also made it known that he works for the Children of Arkham and his plan is to take back Gotham from people like Bruce Wayne. Bruce may be right about Cobblepot’s character, but the episode forces Bruce to look at things from an outside perspective. Actions speak louder than words and everything Bruce (and Batman by association) does only sinks his cause further and further. By the end of episode three, Harvey doesn’t believe a word Bruce says, Cobblepot is acting CEO of Wayne Enterprises, and Bruce is the madman who belongs in the Asylum.

And that, my friends, is “New World Order” in a nutshell. 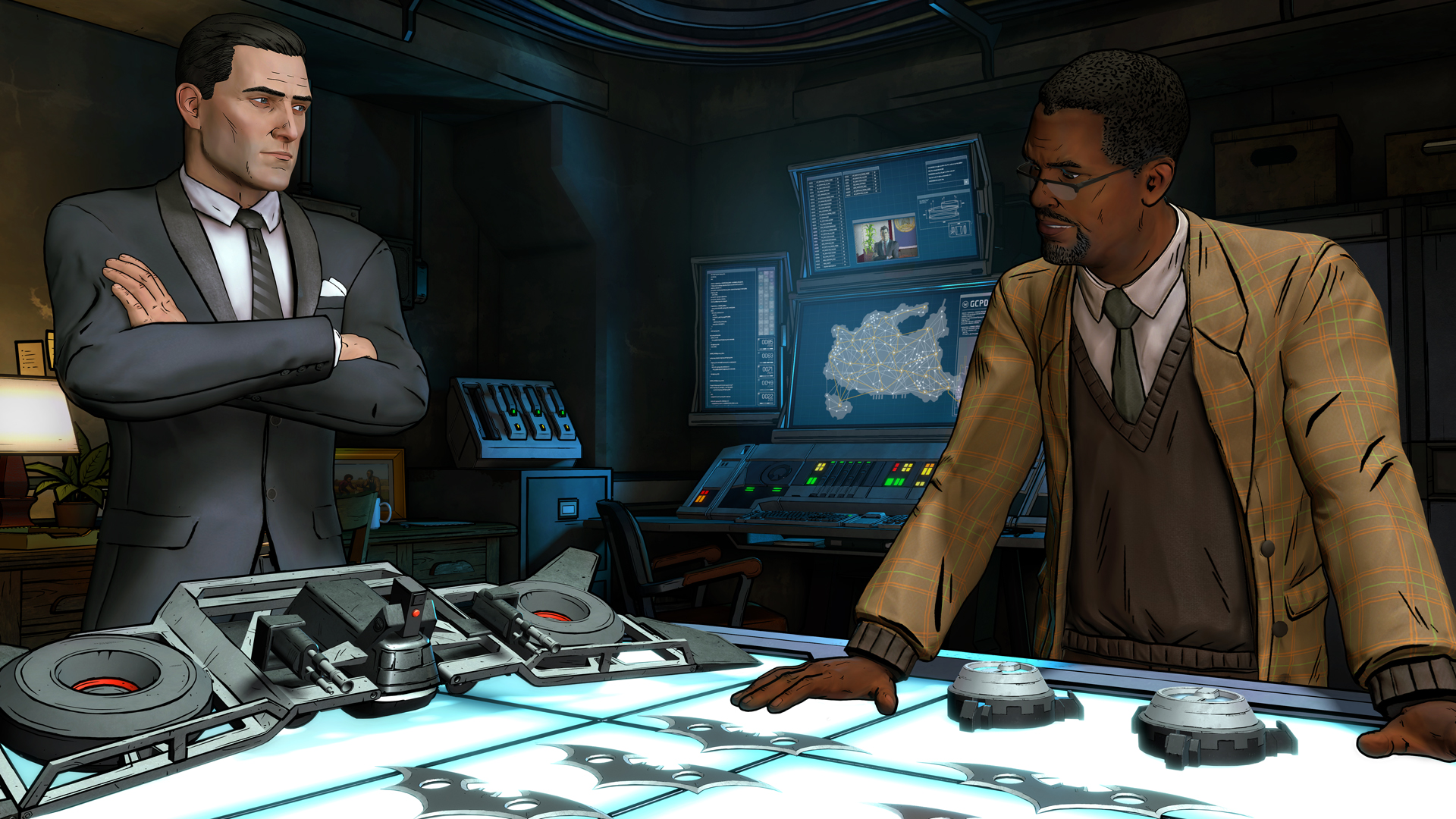 There’s not too much to discuss in the way of actual gameplay within Batman: TTS. What Rob said in his initial review of episode one is still accurate now. There are some graphical issues (like how off it looks when Batman holds a steering wheel), but it’s the usual fare for a Telltale game at this point. Performance is better than previous games but the bugs and syncing issues have become expected. (Believe me, I hate even writing that.)

What I’d rather discuss is the nature making “decisions” in a story we know so well. For instance, I wonder at the choice of using Harvey Dent as the mayoral candidate. Sure, it’s a canonical decision, a familiar character for bat-fans, but it’s also a tortured story we know well: Harvey’s descent into Two-Face. At the end of episode two, choosing to save Catwoman seemed like a no brainer because 1. I’m big into vagina loyalty and 2. I knew Harvey would eventually lose his mind. It felt more important for me to save the one who was more likely to be at my side by the end the five episode arc rather than the one who would likely become my enemy.

In fact, by the time I started episode three, I’d already written off Harvey as a villain. I was kind enough, of course. I flirted with Harvey at the hospital like the good boyfriend I am, but whenever there was an option to choose someone over Harvey, I took it. It became this self-fulfilling prophecy because I knew he had the opportunity to turn on me at any moment, so there was no point in trying. Maybe that is the point of the series, the point in using Harvey as opposed to a new, unknown, character. Because we know how Harvey’s story ends, does this change how we, as Bruce and Batman, treat him?

None of this is to say Harvey isn’t likable. Travis Willingham does a great job bringing, ahem, both characters to life. In fact, much of the voice acting has been top-notch through three episodes, but that’s what you get when you hire some of the best in the industry. 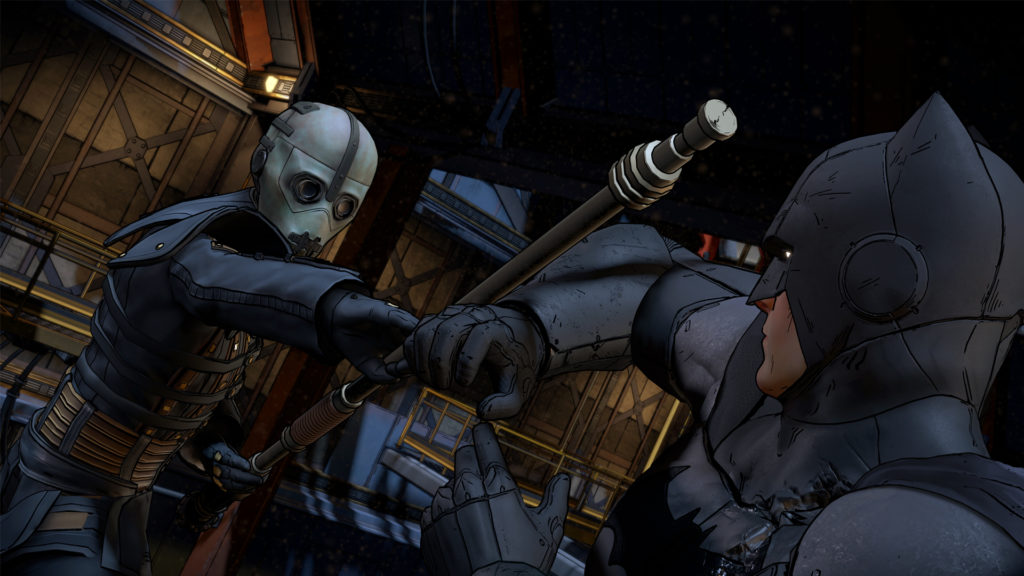 The real twist in “New World Order” didn’t come from Harvey like I expected (though, him walking in on a naked Bruce after a night alone with Selina was, dare I say, a wee bit uncomfortable). Instead, it arose from the final moments when Vicki Vale drugged Bruce and announced herself as Lady Arkham, the master puppeteer behind the Children of Arkham.

Now, I want to pause for a moment here because I was genuinely shocked by this turn of events. Sure, Vicki was acting a whole lot of suspicious through most of episode three, but I thought maybe she had just joined Twitter or something. To find out that she was responsible for the Children of Arkham was both wonderful and kind of confusing. I LOVE that a female character like Vicki is the big bad in a Batman game. At the end of episode two, I thought we’d see the Joker as the leader behind the Children of Arkham, but I’m incredibly pleased that isn’t the case. Too often Batman stories rely on the Batman/Joker dynamic as a source of tension instead of writing a genuine villain. That being said, I hope we learn more about Vicki’s background in episode four because the move felt so out of left-field that it ultimately left me feeling like it was just the most shocking decision instead of the one that made the most sense in terms of the story. (I’m assuming Telltale will give her her due.)

BUT WHAT THE HELL, VICKI? You were the Chosen One! I picked you over Gordon! I would have saved you before Selina Kyle! I LOVED you!

(Most of my confusion over her betrayal is probably due to not wanting to admit my heartbreak.)

At the end of the episode, here’s how my choices played out (these stats may be different now that the game has been out a few more days):

Batman: The Telltale Series episode four is slated to release sometime in November, with episode five coming at the end of the year.