‘The Flash’ Review: Introducing Yet Another Speedster, Jay Garrick

Just because it’s a different life doesn’t mean it’s a worse one.

I want to chalk last week’s episode up to sophomore jitters because this week, “Flash of Two Worlds” is a return to The Flash we all know and love. The show is not without its issues, but Jay Garrick’s introduction has proven to be a big help to the Scarlet Speedster, in more ways than one.

Last week ended on Jay’s introduction and this week we’re treated to a bit of his back story, you know, with Joe’s gun pointed at his head. When Barry opened up the Singularity, he inadvertently opened up a breech between alternate universes, allowing Atom Smasher, the new Sand-Demon, and Jay the ability to travel to their world. If you thought the time travel arcs were confusing, things are about to get hella complicated. Because of this, there could be an infinite number of Barry Allens, Flashes, and even, more Harrison Wells.

Cisco and Martin team up to locate the breech and put a stop to it, to keep more metahumans from escaping into their world and trying to kill Barry. It’s a clever ruse to be able to reuse baddies from last season but I hope the writers don’t take it too far and just repeat arcs.

On top of this, Barry is dealing with trust issues, namely with Jay Garrick, another Flash character who dares to try to step into the role of teacher. I actually like distrusting Barry more than loner Barry from last episode. It makes more sense for him to be wary of trusting new people in his life after Harrison Wells threw a giant, yellow, daddy-shaped wrench into things. Jay inadvertently attempts to fill that role and Barry shuts that shit down faster than Republicans shut down women’s healthcare. For the less astute viewers who didn’t catch on to that comparison, Iris is there to act as translator and to tell Barry when he’s being a bit too dramatic. Apparently Iris isn’t a journalist anymore; her new job is giving pep talks to Barry when he’s being un-Barry-ble. (Heyo!) 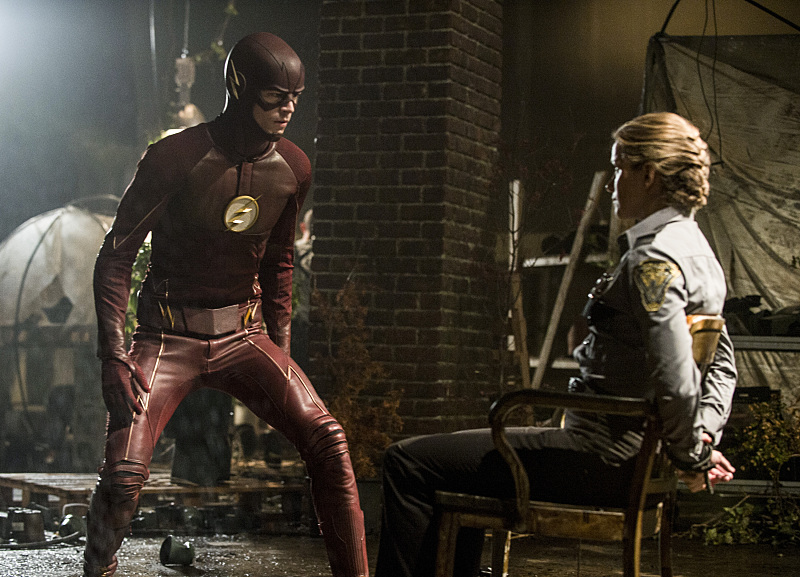 Meanwhile, Joe West is dealing with his own teacher/pupil issues with the introduction of gung-ho Patty Spivot. Spivot is a police force noob who wants nothing more than to be a part of Joe’s Metahuman Task Force, even though the task force isn’t really a thing anymore since everyone who joins gets struck with the Defense Against the Dark Arts curse and then “leaves.” She’s an adorable Hermione Granger-esque character who Barry immediately warms up to. (I guess he doesn’t have trust issues when it comes to pretty, nerdy girls, eh?) Spivot goes all swimfan on Joe and Barry, reading all of Barry’s forensic reports, doing her own print analyses, and even tailing Joe while he’s chasing a potential metahuman. She also manages to get herself caught by said metahuman and why Sand-Demon takes her over Joe is beyond me. Female, I guess.

Speaking of the metahuman, Sand-Demon, he’s not actually made of sand, but rather, he can break his body down into pieces so he looks like sand. There’s some more confusing scientific mumbo jumbo associated with all that, but I’m just gonna say it’s sand. Team Flash treats him as such anyway, and Jay teaches Barry to throw lightning because lightning into “sand” makes “glass.” SCIENCE.

Throughout the episode we also see the growth of Cisco’s powers and I have to say that Cisco is quickly becoming my favorite character on the show. He consistently gets the best lines (even insulting “Green Arrow’s” name!) and his inner turmoil with the revelation of Wells’ evil nature is much more palpable than Barry’s struggle. Cisco “sees” into the past through a strange connection with metahumans, which allows him and Team Flash to catch the Sand-Demon. Martin notices the change in Cisco, however, Cisco doesn’t want anyone to know about it because he thinks Wells gave him the power and he’s afraid it might be connected to something more devious.

At the end of the episode we see a vision of Earth-2, the place of Jay’s origin, and S.T.A.R. Labs is home to metahuman study and school tours for children. Just before the scene ends, Harrison Wells (or Eobard Thawne?) makes an appearance.