*Note: Spoilers for Flashpoint and Season 2 of The Flash*

Season 2 of The Flash ended with Barry running back in time to the night that his mother was killed and this time, he stopped the Reverse Flash before the ending cut too black. Season 3 picks up 3 months following the events of Season 2 where you quickly realize that the world the Flash is in isn’t the same one we’ve grown accustomed to over two seasons. 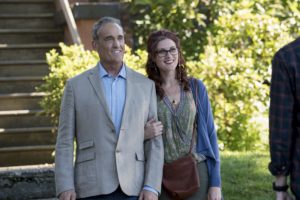 The season 3 premiere, “Flashpoint,” shares its name and premise with a famous DC comic book Storyline. In the comic version of Flashpoint, the Flash saves his mother from dying and is returned to a different world where he is powerless. That story lasts for several issues and also crossed over into various other books. When Flashpoint was first announced for the CW show, there was talk that it might actually cross over into the other shows, similar to what was done in the comics, but being as The Flash is the first of the CW DC comic book episodes, time will tell if it’s a singular tale or not.

Early on in the episode, Barry and Iris meet up at CC Jitters. Barry remembers everything about Iris, but she is unaware of who Barry is outside of being an elementary school classmate. Joe is a heavy drinker who skips out on work and has little to do with Iris and Wally. Most importantly in this changed timeline, Henry and Nora Allen are alive and well. While Joe is having a hard time, it does seem like this is a much happier life than the one that Barry has left.

Kid Flash vs The Rival 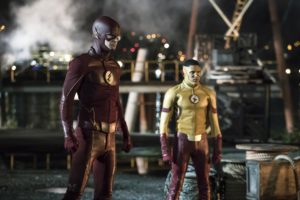 One of the very first scenes finds Barry running after Kid Flash (Wally West), the Flash in this new timeline. Dressed in a mixture of the Red Flash Suit and the Yellow Reverse Flash Suit, Kid Flash looks great. He is facing off against The Rival, yet another speedster, which is incredibly reminiscent of the Flash Vs Reverse Flash from Season One. Barry decides that he needs to help this new Flash, so he decides to get the team back together.

Besides Joe and the Allen parents, the alternate universe finds Barry’s Team Flash friends also changed: Cisco Ramon is a millionaire playboy while Caitlin Snow is a pediatric eye doctor. Through some funny scenes that play on the characters we love, the group decides to work together, and the Flash teams up with Kid Flash to take down The Rival. In the final battle, Wally is mortally injured which is the catalyst for Barry going back in time once again.

Timeline changes come at a price and Barry, in his new idyllic world, starts having time migraines which then cause him to forget things. He confronts Thawne who informs him that he is going to lose all of his memories and that when they are all gone time will cement itself and the Flashpoint timeline will be the only timeline. With the mortal injury to Wally and the change in Joe, Barry decides it’s only right to set things back to how they were originally. He bids his parents a final solemn goodbye and lets Thawne kill his mother. Again. 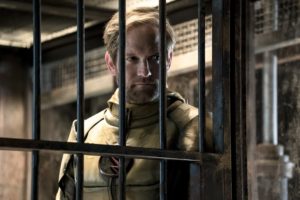 “Flashpoint” was a bittersweet premiere. The episode was packed with great moments like Caitlin thinking she was kidnapped and everyone calling Wally “Kid” Flash. Even better was the chemistry between Eobard and Barry. Each of their interactions in the show was just brilliant. But the episode ends with the Flash basically ending Flashpoint. After one episode, things are mostly back to normal. Given the opportunities for conflict, I could have easily spent two or three or four episodes in this world with these characters. I’m not saying that it hurt the story, but I feel there was much more that could have been explored.

The ending of “Flashpoint” really sets the pace for what is coming in Season 3 of The Flash. After a sweet kiss, Iris tells Barry, “I’ll see you soon.” Only, after the Flash returns to the proper timeline and visits with Joe and Wally, he asks about Iris. Joe gets physically disgusted and storms off, to which Wally replies by saying, “You know Iris isn’t here…they don’t talk Barry, you know that.” Cue music. The tag at the end shows the Reverse Flash woke up to the word “Alchemy” being scratched into a mirror.

And that’s it. The Flash is back. Iris seems to be the “butterfly effect” of Barry’s Flashpoint event, however, I would be willing to bet she won’t’ be the only thing that’s different. “Flashpoint” was a really strong start to what should be a great new season of The Flash.

Quote of the Show:

Barry: “I hate you!”
Reverse Flash: “And I hate you…and I sometimes wonder which of us is right.”

The Flash airs Tuesdays on The CW at 9pm EST.