The Boys Season 3 Episode 2 Review and Recap: ‘The Only Man in the Sky’

The Only Man in the Sky Keeps the Pressure Up, With Homelander Unraveling Before Our Eyes

In my last review of The Boys Season 3, I briefly mentioned how Maeve’s threat was holding Homelander at bay. Keeping the narcissistic, superpowered jackass in check. Well, as of this episode, The Only Man in the Sky, things are changing. And not for the better, at least as far as the safety and sanity of this crazy world is concerned. But definitely for the better for us fans enjoying this wild ride.

It all starts with an even more amazing movie sequence than Charlize Theron as a super nazi. It’s a trailer for a movie based on the Deep’s memoir, and it’s more hilarious than I can put into words. And that’s a great place to start, since things get much darker very quickly.

Despite the temptation, Butcher is fighting the urge to use V24 doses to get superpowers of his own. He even has a nightmare about it before waking up to Ryan on a Zoom call. Somehow Butcher has become a reluctant father figure to the lad, despite being utterly unqualified for such a responsibility. Unfortunately for Ryan, Butcher is still distraught by the death of the boy’s mother, Becca. And he lashes out when he’s in pain, making the boy feel unwanted. Truly, the only thing Butcher wants other than Ryan being happy and healthy is to kill Homelander with his own two hands.

Speaking of which, Vought is hosting a big birthday bash for the psychotic test tube man child. As such, he’s being even more of a douche than usual. Even Stormfront seems tired of his nonsense, though that’s probably due in large part to being more torso than uberbitch. She hasn’t been healing like I worried she might after last season, but she’s whole enough to talk and give Homelander disgusting favors.

Since Homelander isn’t feeling the love from his woman, he’s taking his rage out on Starlight for being nominated as co captain of The Seven by Stan Edgar. He changes her script for his birthday bash, and wants her to sing a sexy Marilyn Monroe edition of Happy Birthday to him. Annie isn’t having it, and thankfully gets backed up by Stan the man, which shuts the blonde bastard up temporarily.

We finally learn the reason MM has been doing research when he’s not being a father. Turns out, Soldier Boy was responsible for the death of MM’s father. It looks like collateral damage, but it’s been weighing on him more and more. And that’s before Butcher comes knocking for his help in finding facts about what killed Soldier Boy. He feels that might give him a weapon to finally kill Homelander with, but it leads to many messy missions for the crew.

Kimiko and Frenchie head to Vought Land to interrogate Soldier Boy’s girlfriend, the Crimson Countess. The entire place is gaudy and fake, like a truly twisted Disney Land, but it still appeals to Kimiko. Not due to what it’s selling, but because she desperately wants to reclaim a childhood she never had. When Kimiko and Frenchie talk with the Countess back stage, it quickly goes badly and the woman escapes. As they chase her, she tosses a blast of heat and death that explodes a mascot in the wrong place, right before she escapes. The whole incident brings up bad emotions for Kimiko, who later confesses to Frenchie she feels like she’s broken and can never be a real person thanks to her unwanted powers.

Hughie is overwrought after discovering firsthand his boss, Neumann, is a supe. And a dangerous one at that. He hunts a lead about Red River, a group home for superpowered children where Neumann grew up. After being outed by a terrifying super child, he pretends he’s looking to adopt a kid with Starlight. Meanwhile he steals info from the computer and realizes the amazing extent of Neumann’s powers. He also finds out that the person who adopted her was none other than Stan Edgar. He apparently serves as a father figure and also cleans up Victoria’s messes. 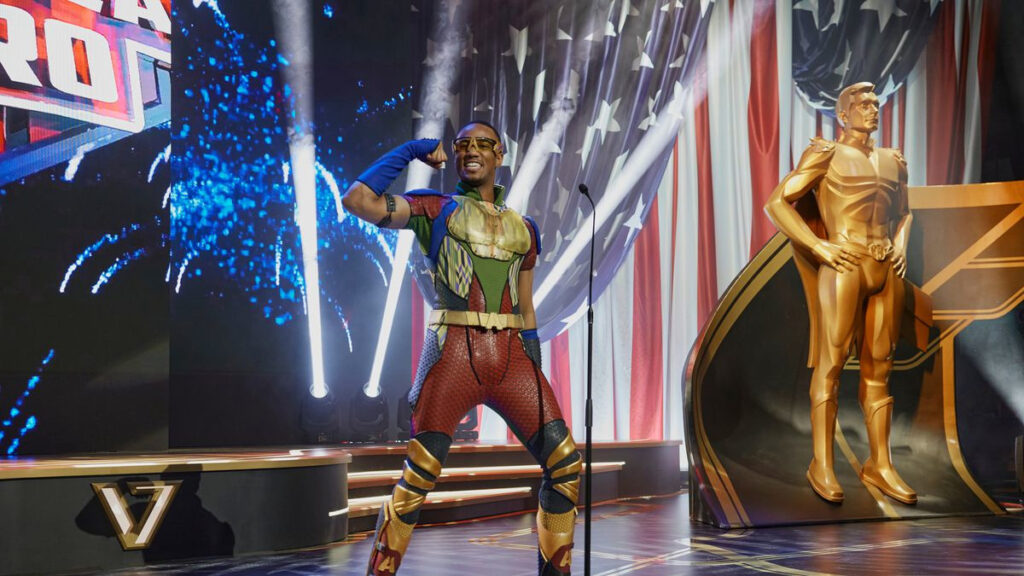 Though we don’t get much time with Deep, A-Train takes his place as comic foil. He desperately wants to rebrand, since his powers aren’t what they used to be. He tries to push it to Ashley, and she politely ignores him, pretending she’ll look into it. But that doesn’t stop A-Train from getting his own new costume later when he introduces Homelander to a hungry crowd of idiots.

Butcher also goes to what’s essentially The Boys’ version of the NRA, searching for Soldier Boy’s former sidekick, Gunpowder. While parts of this scene were hard to watch, especially with the current rash of gun violence, they also poke a ton of fun at the fetishization of gun culture. Butcher pretends to be a fanboy of the supe, only to start poking the bear in the bathroom. Which isn’t a good idea, since afterwards Gunpowder does his level best to murder Butcher from a distance in the parking garage. The supe is a super marksman, and he nearly does Billy in before he distracts him with some car alarms and escapes.

Things start to unravel when Homelander is trying to stop someone from jumping off a roof, only to discover that Stormfront has killed herself. On his birthday, no less. Suffice to say, he goes from stopping the jumper to encouraging her, and things don’t calm down from there. MM is losing his cool and decides it’s best to leave his daughter in his wife’s care. And just as a wounded Butcher is thinking he should take a step back, Hughie reveals that his new boss is a supe.

It all culminates in another confrontation between Butcher and Gunpowder, but this time Butcher is ready. He took a dose of the V24, and he beats a confession out of Gunpowder. Turns out, Butcher’s old ally Grace and the CIA were associated with the death of Soldier Boy. Which although helpful, doesn’t stop Butcher from murdering the supe, thanks in part to a sudden onset of heat vision. And just when you think things couldn’t get any crazier, Homelander snaps and basically gives a toxic masculinity Ted Talk on stage.

The Verdict on The Only Man In The Sky

Overall, The Only Man in the Sky was a fantastic follow up to Payback, and I’m excited to see where this season goes. Especially since we have yet to see Jensen Ackles’ portrayal of Soldier Boy, who is basically a far right Captain America. Be sure and tune in soon for our upcoming review of the next episode of The Boys.