Take a Dark Trip Down Memory Lane in Barbary Coast

Before we get deep into Barbary Coast, I wanted to clarify something. I had been saying that MM’s father likely died of collateral damage thanks to Soldier Boy. But after watching The Only Man in the Sky again, MM clearly says his father died at his desk. Which doesn’t fit that supposition on my part. In any case, I suspect we’ll find out the details of MM’s grudge against Soldier Boy very soon. Also, I misspoke when I said we hadn’t seen anything from Soldier Boy yet. We did briefly see him in the movie clip before Crimson Countess’ song and dance, but we get to see a lot more in this episode. So let’s talk about the latest madcap adventure of The Boys.

It all starts with a flashback to Starlight on the Little Miss Hero pageant. She’s young, impressionable and singing the hell out of Baby One More Time. It’s more than a bit uncomfortable, mostly because her mother is pushing her to sing and dance while acting twice her age. But the young actress does a great job of portraying a widdle Starlight, and showing how stressed she is by it all. 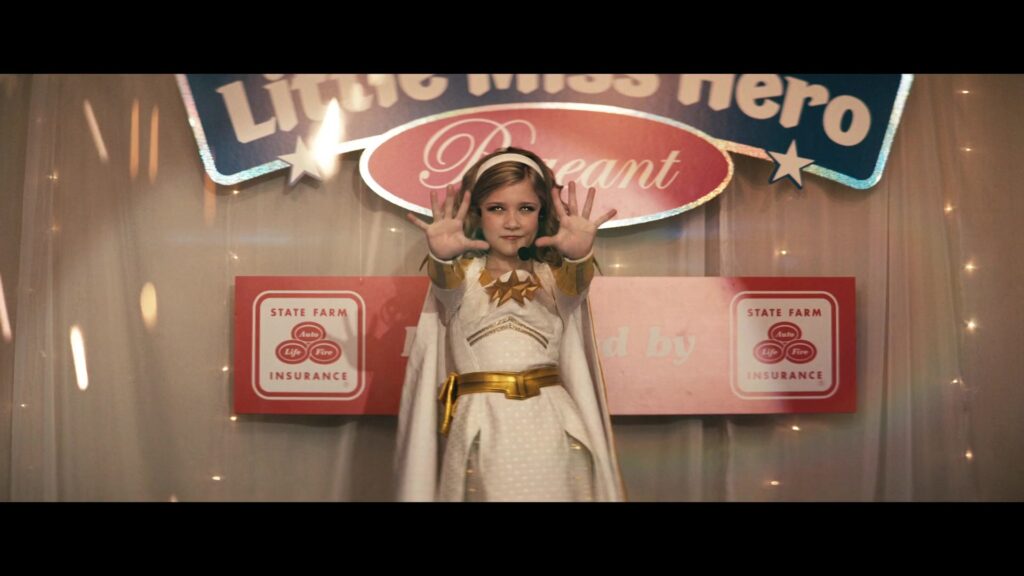 Speaking of stress, Homelander is officially unchained. Not only did his insane speech get well received, his popularity numbers are up, Ashley reports. So of course this means he feels like he can do whatever he wants. He starts by screwing up the American Hero contest. Starlight wants to nominate the Muslim hero, Silver Kincaid, to The Seven, and instead Homelander brings back The Deep. Mostly to humiliate Starlight and to show nobody can control him. When Starlight threatens to show Maeve’s video, he responds that he’d prefer to be loved, but he’s happy to be feared. And if he had nothing more to lose, he’d start raining destruction on the infrastructure of the United States. Just for funsies.

A-Train reconnects with his brother in the episode, and is counseled that he can do more as a mentor than a hero. Turns out, if A-Train uses his powers again, he might die from the strain. His brother also tries to instill some civic duty in his little superpowered bro, telling him about a superhero intervention gone horribly wrong, and ending with the murder of an innocent black man in their neighborhood. While I’m not sure where A-Train’s story is going, I hope he starts to use his platform to speak for something that matters. I think that’s possible, but we’ll see. 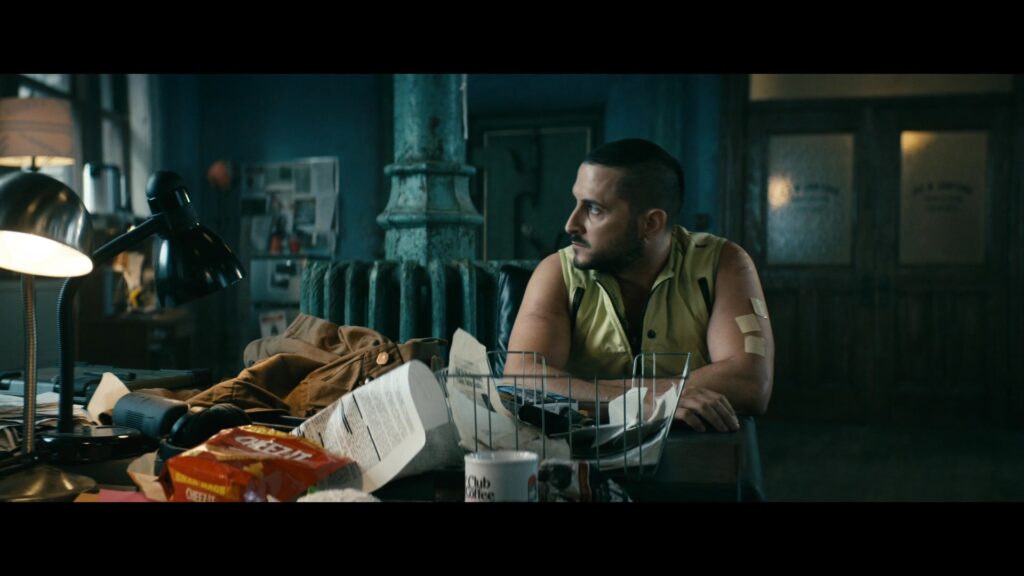 Frenchie is also on a side mission, trying to help his former paramour, Cherie. She tells him she’s back to slinging drugs for a Russian named Little Nina, and claims someone stole 11 kilos from her. Later on Frenchie is forcibly brought to speak with Little Nina. Turns out, Cherie stole the drugs herself, and Nina wants Frenchie to work for her again. And possibly under her. There’s clearly some disturbing sexual history between the two, and she says Frenchie is just a rabid dog that always heels for his master. Frenchie doesn’t want anything to do with her, but I have a bad feeling this side story isn’t done yet.

The meat of Barbary Coast is about the aftershocks of Butcher’s superpowered murder of Gunpowder, and discovering the truth about how Soldier Boy died. When he pushes Grace for answers, she tries to pretend she knows nothing. Butcher doesn’t buy it, and uses something he stole from Mallory to leverage the woman into giving answers. Turns out, it all happened back in the 80’s in Nicaragua. The CIA was forced to work with Vought, and the superpowered doofuses mess everything up. Soldier Boy is clearly a sexist pig, acted masterfully by Jensen Ackles. But he’s far from the worst. He only hits on a young Mallory, but another hero named Swatto accidentally draws Russian forces to their location.

Things go horribly wrong, and not just because of the Russian invaders. The superheroes kill tons of their own team, and more than a hundred people perish. We also learn why Black Noir never takes off his mask anymore. Mallory gets thrown by an explosion after nearly being killed by a trigger happy Gunpowder, and wakes up to find Soldier Boy is dead. Worse, the Russians took his body with them after killing the hero with some mystery gun. Butcher wants that gun, but he’s also furious that Mallory didn’t tell him it existed sooner. He claims he could have killed Homelander ages ago and maybe then Becca would be alive. Grace counters saying that he’ll never stop, and only kills heroes to satisfy his own selfish urges to hurt people. Then he proves her right by saying something unforgivable to young Ryan. 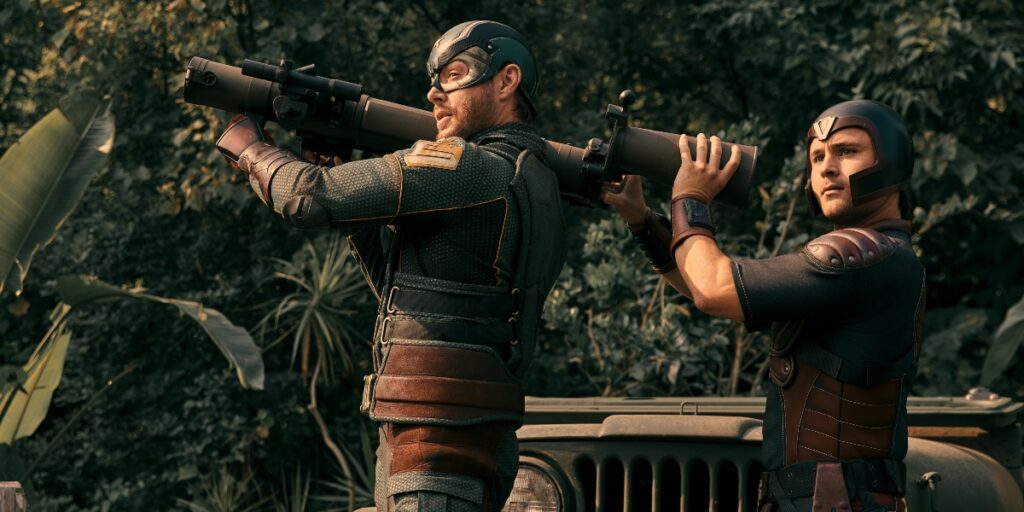 Not satisfied just torturing Starlight, Homelander also brings The Deep into the fold again, and then forces everyone to only eat seafood. Which is the worst sort of humiliation for Deep, since he can hear what all the seafood is saying. Then he’s forced to eat an octopus (named Timothy) that’s still alive while Homelander watches. It’s gross and cruel, and I nearly gagged watching that scene. But it aptly illustrates how off the rails Homelander has become.

The Verdict The Boys Season 3 Episode 3

Despite the dark stuff, there’s some really great moments in Barbary Coast. It’s fun seeing all The Boys back together again, and it’s clear they have a lot of love for each other. MM and Frenchie hurl insults lovingly at each other, and Hughie has more balls than sense. But they work well as a team. Kimiko also connects briefly with Ryan, and it’s really touching. I just wish Kimiko could accept her own powers and continue to use them for good, instead of dwelling on how they’ve changed her life.

Just when you think Homelander can’t get worse, he announces to everybody that he and Starlight are in love. And because Starlight promised Hughie she’ll tough it out in The Seven until they can find a way to kill Homelander, she forces herself to go along with it, and even makes out with the homicidal hero. While it’s helpful that her ex Supersonic is now on the team and has her back, I have no doubts that Homelander is only going to get worse. Whether or not The Boys can find a way to kill him this season is the real question.